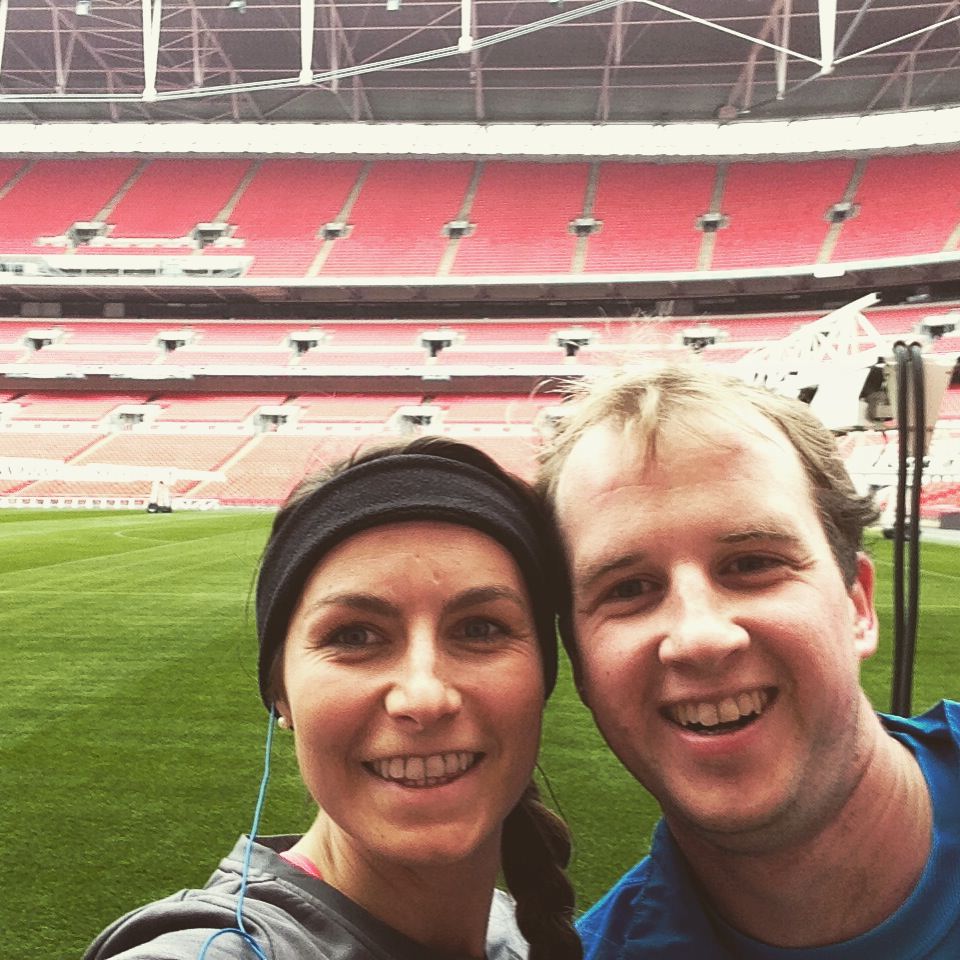 When choosing a half marathon to race, it’s important to consider a few things before signing up.

1. Where it is? is it easy to get to, will there be transport, can you park easily?

2. What is the course profile like? Flat, hilly, an out and back, laps?

3. How many people have signed up? Will the course be crowded

I admit I knew none of the above about the North London Half this morning. After discovering it would take us an hour and a half to get to Allianz Park via public transport, we decided to drive the 25mins to the race start. We just missed the parking we’d be assigned but luckily the lovely parking attendants let us park in the other car park.

You have to pre-book and buy a parking permit if you want to drive to the start. They won’t let you in without seeing your permit.

With only 20 minutes to go before the start, we ran into one of the stands to use the loo, and find safety pins (they weren’t in the race pack- another thing to check before you leave the house!) I usually judge a race by their loos, so was impressed to have proper loos with a relatively short queue. We then made the 10 minute walk/jog to the start line and snuck in with the 2 hour pace group.

We started running and I plugged my podcast in. Tom and I were planning to run together, although I was prepared for him to be a lot faster than me but I was excited to run with him. We started running at a sub 9 min mile pace, with the aim of staying about that pace for a sub 2 hour finish. That was the plan…until we started hitting the hills. They were steep and felt relentless. See point 2. I had no idea that this course would be so hilly, no that we would loop back on ourselves so have to do most of the hills twice!! 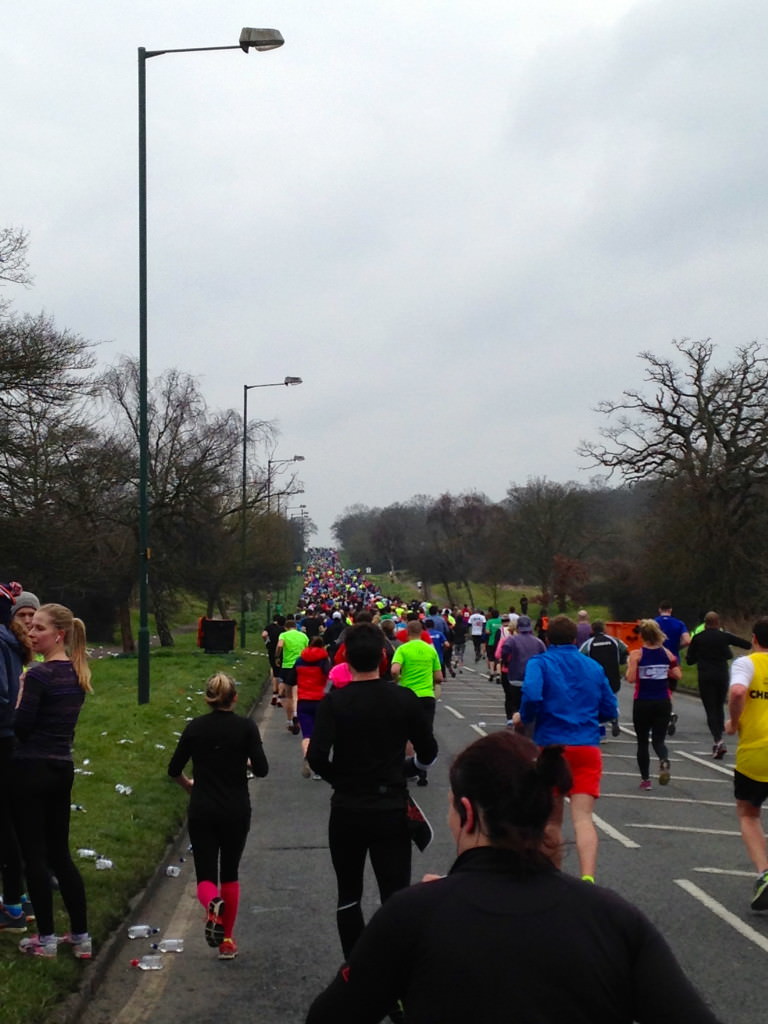 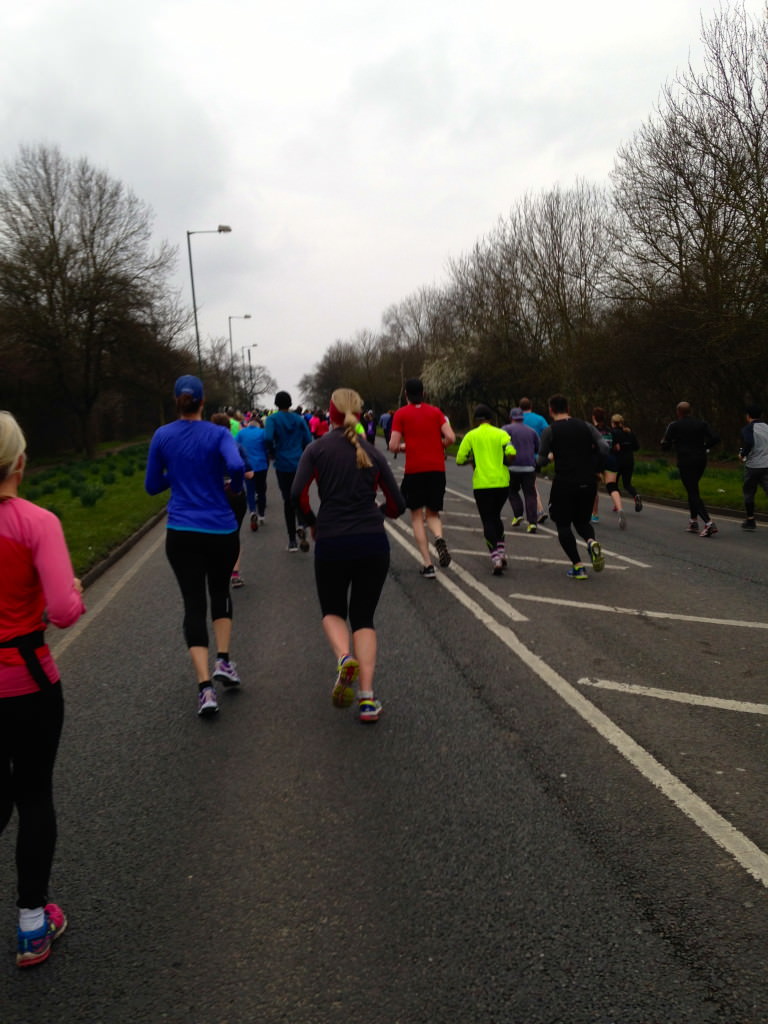 The highlight of the course was reaching Wembley stadium and running alongside the pitch! Tom, as a huge football fan, was thrilled with this surprise (point 2- NO idea we were running into Wembley!) We reached the stadium around the halfway point, and I was already beginning to struggle. Luckily the stadium, and my fruit puree (refined sugar free!) cheered me up a little and I was able to keep a steady pace onwards for the next few miles. 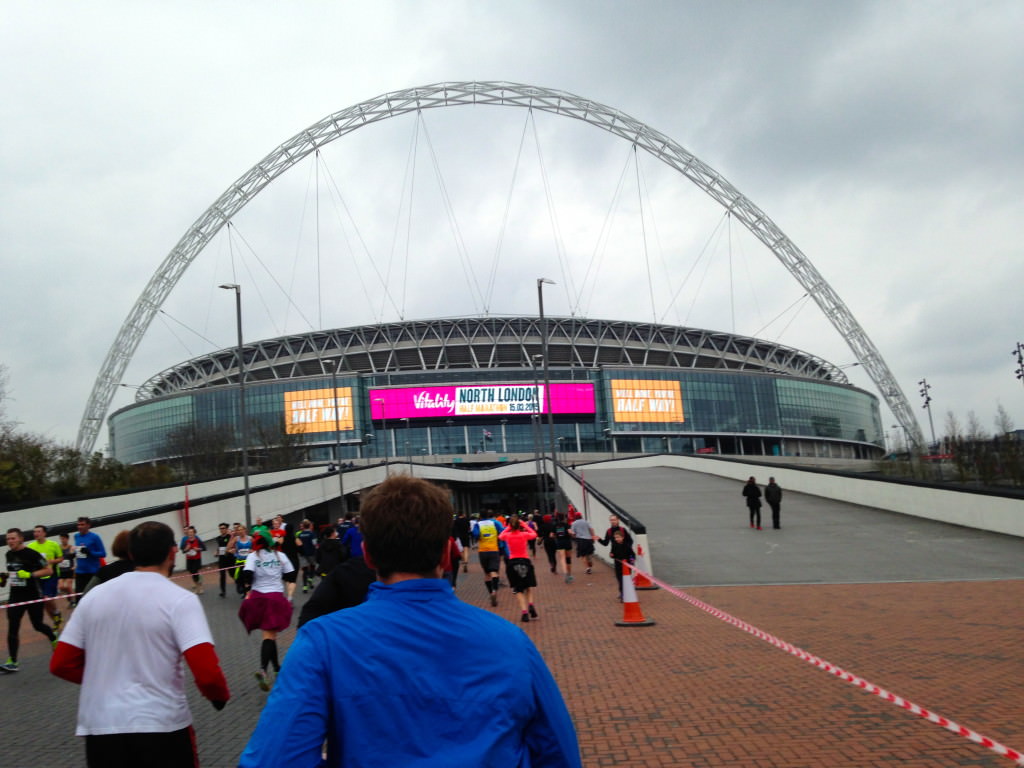 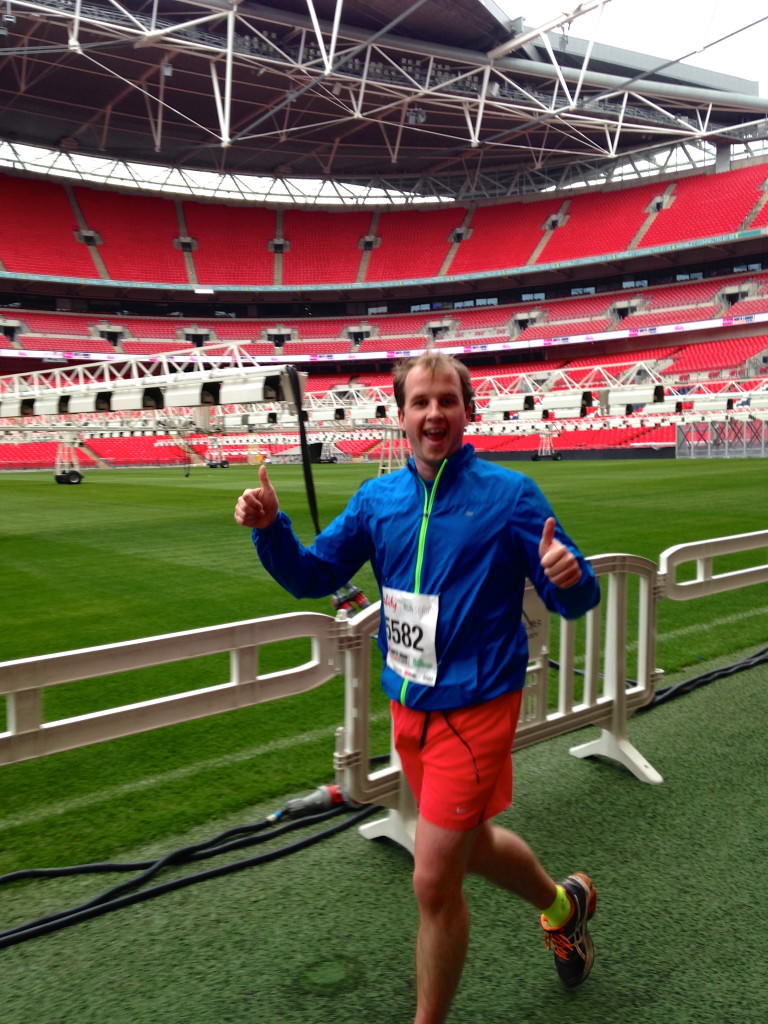 The course was pretty crowded (see point 3) but never annoyingly so. However I was frustrated by my own lack of fitness- I haven’t been running a huge amount lately and it shows. It was a real struggle to keep a 9-9.30 pace throughout, and I was aware that I had been cocky thinking I could just turn up and the run would feel easy. Tom had to wait for me at the top of most of the hills- he nailed each hill, whilst the hills nailed me! The course was at least well signposted, with plenty of water stops and loos along the course, although the route itself (with the exception of the stadiums) was really quite dull with minimal support.

With about 4 miles to go, Tom told me we needed to pick up the pace to run a sub 2. But I couldn’t run any faster. With just under a mile to go, he told me we had 4 minutes. I did finally manage to get my legs to move more quickly, but it wasn’t anywhere near enough. We crossed together in 2.03.15 and I couldn’t have been more pleased to finish running and start eating the contents of my goodie bag. I think if there had been a Mars Bar in the bag I would have stopped my sugar ban right then and there! 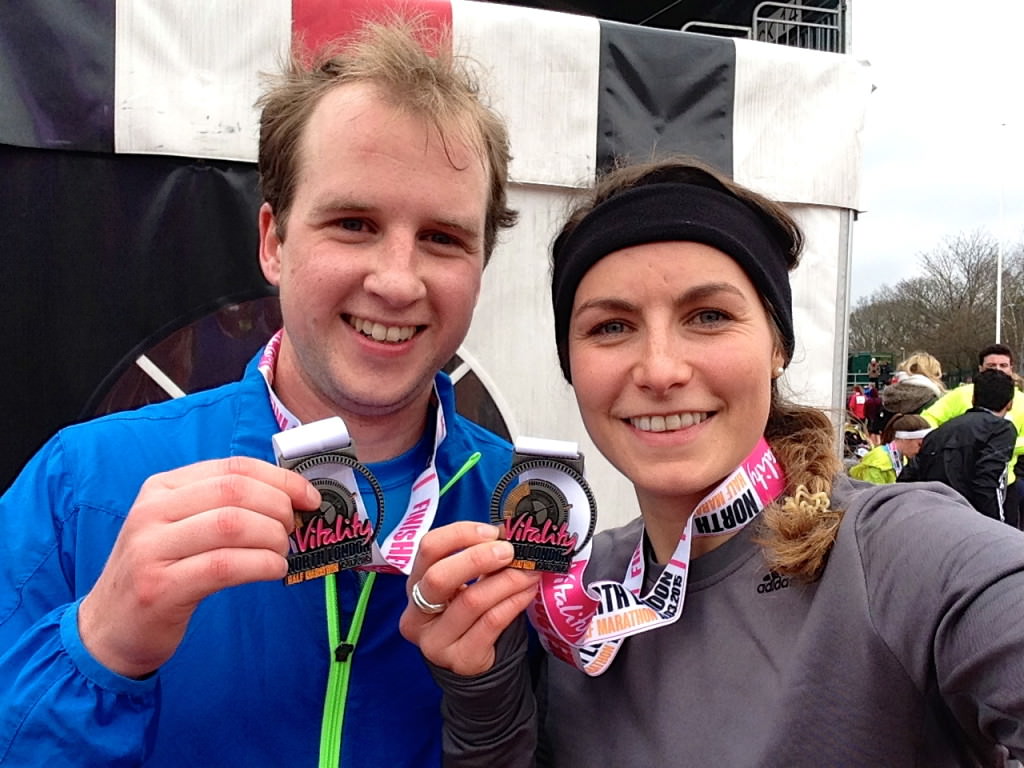 After the race, I was lucky enough to get the chance to attend a Q&A with running legend, Mo Farah. He talked about his upcoming plans for Rio 2016, motivating yourself to run (remember why you’re training, all the sacrifice will be worth it!), and his beloved Arsenal! It was amazing to get to hear him talk about his marathon experience too, about how much it hurt- I can definitely sympathise.

I’ve definitely been inspired to get back on it in terms of fitness, and especially with running. Fingers crossed a place in Chicago so I can really get my training going! 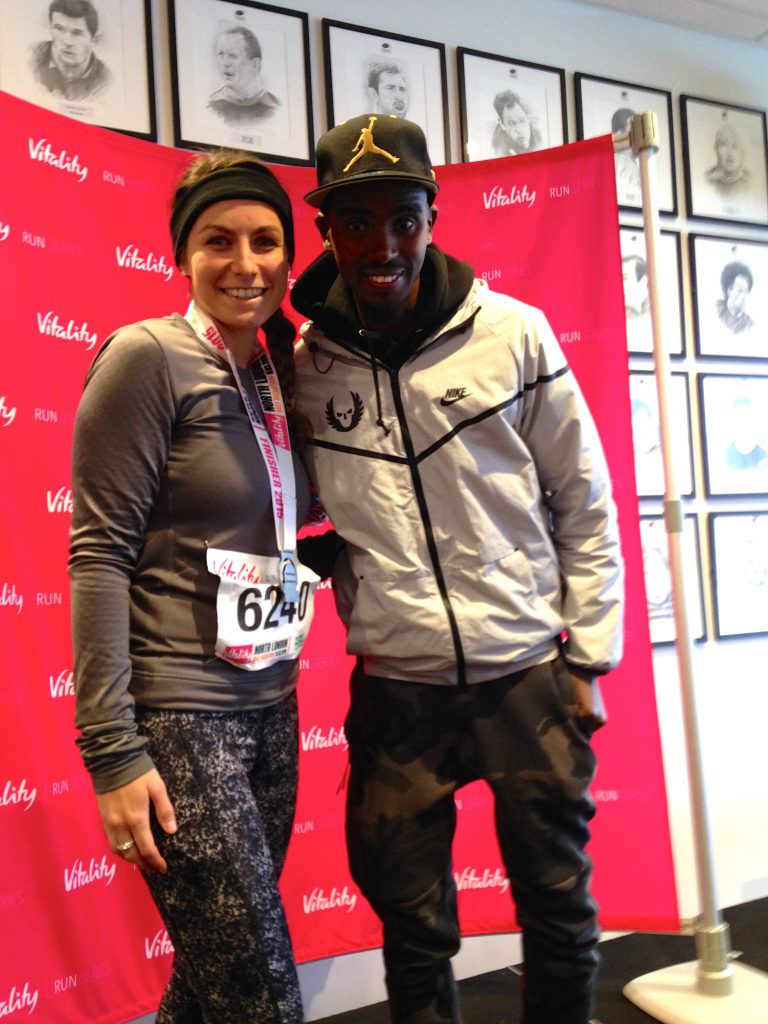 Thank you to North London Half  for the complimentary race place for both Tom and I!