On Sunday I took part in my first ever bike race- the infamous British Heart Foundation London to Brighton! Over 28,000 people take part each year and it can be tough to get a spot as it is a really popular event. A couple of months ago, my Mum emailed me to ask if I wanted to be part of her work team, always up for a new challenge I definitely wanted to take part, and was thrilled when Tom said he’d love to do it too!

We bought bikes in anticipation of the event, and have been training a little in preparation, although my longest ride was 18miles on the Wednesday before! I had our bikes serviced at the local Evans, packed our bags with plenty of snacks and set the alarm for 5.45am.

Rather than cycling to Clapham Common, where the race begins, we decided to save our legs (and bums) and get a taxi over instead. This saved a lot of last minute panic, and enabled us to eat our breakfast, pb and jam sandwiches, in the car.

We’d arranged to meet up with the rest of our group at one of the junctions by the park and make our way to the start line together. We’d signed up for the 7.30am start time, hoping to avoid long queues to get out of London. 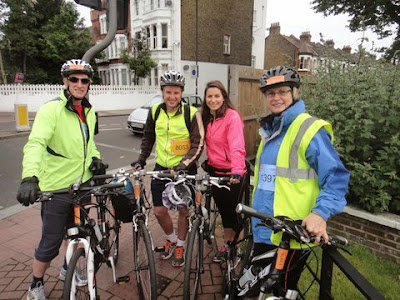 The start zone was packed, and there was a lot of nervous anticipation. There were start waves beginning from 6am-9.30am in half hour slots. You could start anytime after your official time but not before. 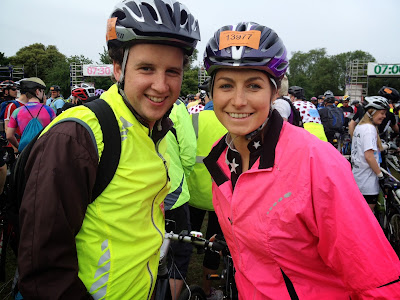 It was slow moving through London as the roads hadn’t been closed to traffic and we had to negotiate around buses and stop at numerous traffic lights. It also became clear quite quickly that it would be really tough to stick together as a large group of 7/8. Tom and I decided that we should make sure that we always had each other in sight (ie. I could see him ahead of me!) and that we’d meet up with the others at refreshment stops. 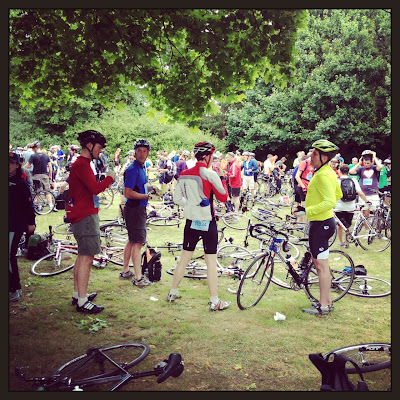 Our first stop was at Mile 11, we were all still feeling good by this point ( a fifth of the way there!) We used the bathrooms, filled up water bottles and had some of our snacks. As a group we decided that our next stop would be at the 20 mile marker. Between these stops there was some major congestion, with people walking up one of the hills, and with a temporary traffic light causing huge cyclist tail backs. It was pretty frustrating inching forwards, pushing our bikes during these periods. 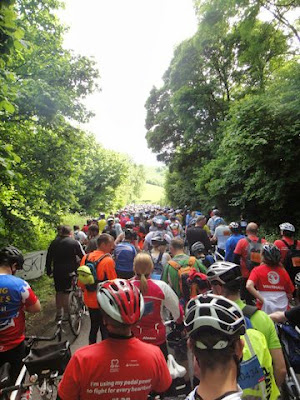 At many of the refreshment stops there were BBQs, cake stands and other goodies on sale. After watching a lot of people enjoying bacon butties at our first rest stop, we decided to treat ourselves at the 20 mile stop. I certainly wasn’t expecting this during the ‘race’, but it was obvious that for most people this was a fun ride to be enjoyed at a pretty leisurely pace!

By this point our group was beginning to spread out, and we managed to meet up with our 8th team member (who’d had a later start time than us.) Four of us forged ahead and agreed to wait for the others at the 35mile mark. This was also the point that we’d agreed to meet up with Tom’s family.

The stretch between the 20 mile mark and 35mile were the hardest of the day for me. It had started to rain, and I cycled most of this stretch on my own with the boys ahead of me. There were two fairly large hills in this section, one of which I walked partly up. Then came the second hill, I could see many people walking around me but I decided to push through it. At the top, we pulled over to the edge to see if we could spot some of the others and saw my Mum and Step-dad trucking up it too!! There was an awesome brass band playing at the top of the hill- so British! 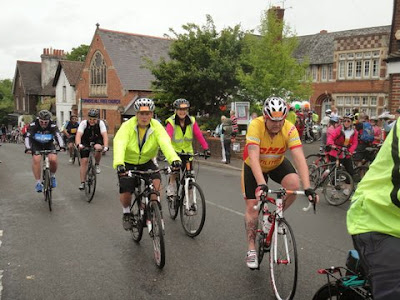 By the time we reached the refreshment stop at Mile 35 I was quite cold and wet, so it was a treat to see Tom’s family, including his nephew Alfie, and have some much needed sweets and Gu Chomps. 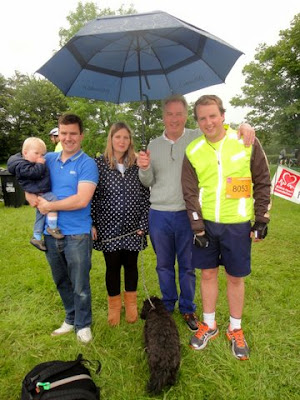 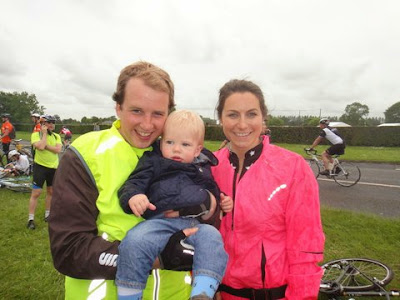 With only 20 miles to go our spirits were raised again, and we arranged to meet up with the rest of our group just before the BIG hill- Ditchling Beacon, just before the 45 mile marker. I really enjoyed this undulating 10 miles, although Tom didn’t so much! I ended up leading the way for a while. I discovered that although I wasn’t as fast as the boys on the flats and downhills, I could make up for it on the uphills.

The sun finally came out just before Ditchling Beacon, and we enjoyed a long rest stop to build up our energy before the hill, or the WALL as many riders around us were calling it. After chomping down on 7 or so jaffa cakes, refilling our water bottles, Tom and I were ready to take on the hill. 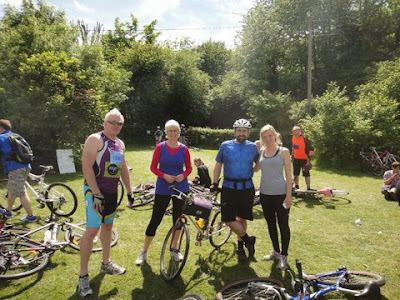 The plan was to go as hard and we could for as long as we could up the hill, and walk if we needed. Lots of people were walking, mostly on the left hand side of the road, so we stuck to the middle/right of the road, put the bike in the lowest gear and just started pedalling. It was certainly tough.

After a couple of minutes, an ambulance came up the right side of the road, forcing all the cyclists to the left. Unfortunately, a man with clip-in’s wobbled over and knocked me off my bike at this point. Luckily I was able to steady us both, but it knocked my confidence and he cycled off without even apologising. I started to walk, annoyed and disappointed that I hadn’t been able to give the hill a fair go. After walking for a minute I knew I had more in me, got back on my bike and pushed my way through slower cyclists and walkers.

I overtook many other cyclists, and started to believe that I could make it to the top. I passed the guy that knocked me off, yes!, and continued on. My breathing was heavy, and I was feeling exhausted- the cruel thing about the hill is that it keeps on bending round and round with no end in sight. 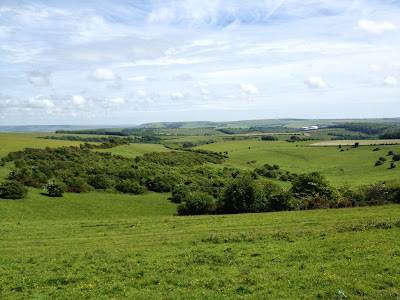 Finally I made it to the top. 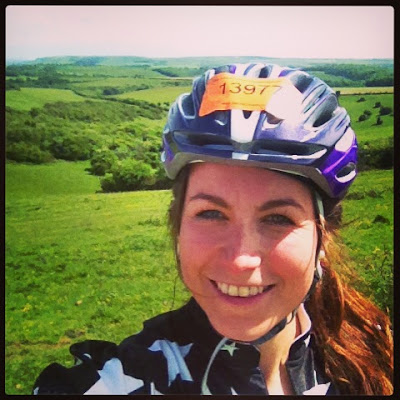 I found a clear place to the side and pulled over to wait for Tom and the others, and was shaking. A guy asked if I was ok, and I tearfully replied that I’d made it the whole way up. He told me that it was awesome, that he’d walked and that I should be proud of myself! 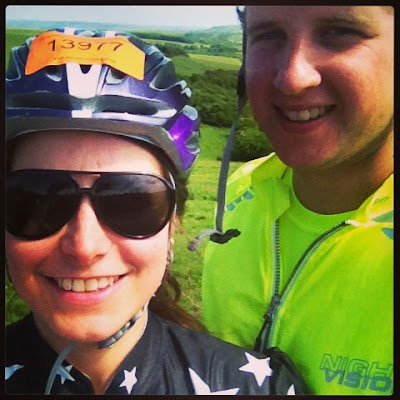 Once Tom made it to the top, after walking a lot of it he admitted, we waited for the others to join us. It seemed like the cyclists were coming in waves, and we later found out that they were reducing the number of people allowed on the hill in one go. By the time we’d met up with David and Scott, we’d been waiting over half an hour, so we text the others telling them we’d meet them in Brighton (my Mum and Step-dad also made it to the top of the hill without walking!) All downhill from here…. 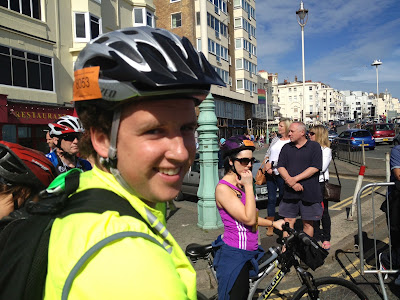 Although sadly, there was a lot of congestion here too. There were whisperings that there had been a fatality, although I haven’t heard anything about it in the news. Hope everyone is OK. It took us a long, long time to get into Brighton and there was a lot of stop, start, at traffic lights. 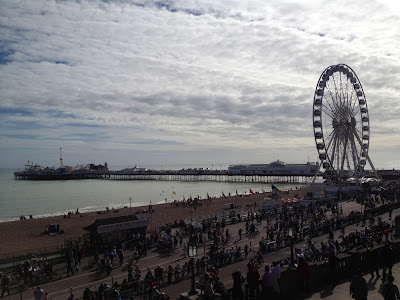 At last we made it to the seafront, we could see the pier and the wheel. They were filtering people in to the final stretch, and we had a clear run to the finish line. We crossed the line holding hands infront of the huge number of supporters. 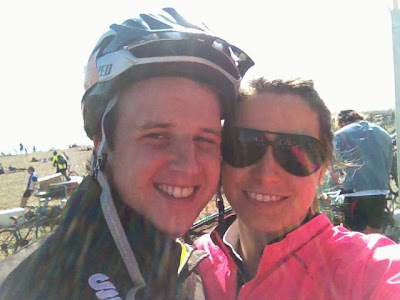 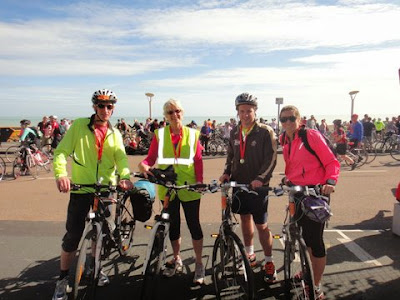 I was starving by the time we finished, and devoured a piece of chocolate cake from a nearby stall, before meeting up with my Mum and Dave. We’d booked ourselves onto coaches returning to London, although it actually took about 2 hours to get back. Upon arriving back in London we discovered that I had a completely flat tyre, meaning I couldn’t ride anywhere. We struggled into a taxi and somehow squeezed ourselves and our bikes in! At this point we were exhausted and could not wait to get home! 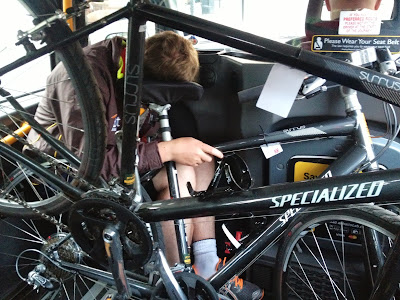 I had a brilliant day, and would highly recommend the BHF London to Brighton event to all  abilities. I was a pretty newbie cyclist and I didn’t find the course too challenging! I’ll certainly be signing up for long bike races in the future.

Find out about other British Heart Foundation Bike Rides here.