Headline news this week that a ‘jogger’ (why he wasn’t called a runner, I do not know), pushed a woman into the path of an oncoming bus. On purpose? It certainly looks like it.

It honestly looks horrendous, and having run over Putney Bridge plenty of times, it shocked me that this could happen there. It’s a hotspot for runners, training along the Thames Path, and I have only ever found other runners to be friendly and courteous.

On my run today, I was completing my 9+ miles along a different stretch of the Thames Path, near where we live, dodging the odd pedestrian and dog walker. An older lady was walking along the path towards me, so I dodged off the path out of her way, or so I thought. I felt a shove on my side and apologised, initially thinking I had misjudged me side-step to avoid her, before realising that she had gone out of her way to elbow me.

I have never experienced anything like that on my run before and was stunned.

I continued on my run, first angry, then bemused as to what I had done to aggravate this woman enough for her to try to hurt me. Luckily, my run was long enough that I was able to get back into my rhythm and enjoy the rest of my mileage. However, upon returning home, I instagrammed my encounter and was saddened to see that I wasn’t alone in my experience. 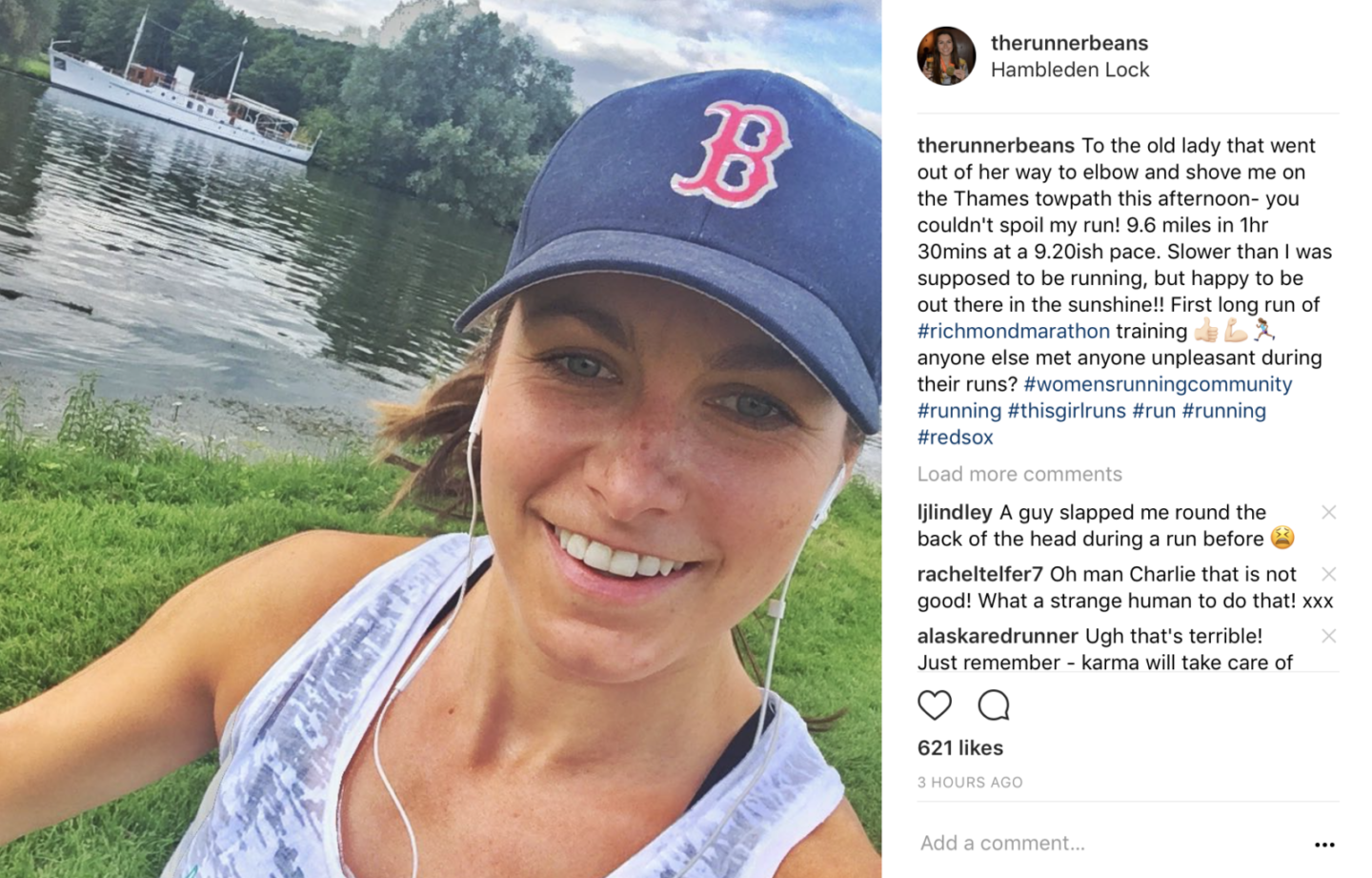 Many people, men and women alike, reported being treated badly by other pavement/path users. Cyclists, dog walkers, people with their kids, commuters…it seemed like there was no one group targeting runners, but it was eyeopening how many people have dealt with horrible situations. And it seems like things this week might have hit an all time high.

Some of their experiences angered me, some scared me and some of them made me feel downright incredulous.

‘Was out running with my friend and we passed a group of “youths” who went to kick her as she passed. I literally roared at them in disgust.’

‘Cruel! A woman stepped in front of me and tripped me today- I rolled across the pavement & she STEPPED OVER ME?! What is wrong with people!? Glad it didn’t ruin your run! I nearly cried ?’

‘I’ve been attacked by dogs and nearly run over more times than I care to remember ?! Once a man who’s dog tried to bite me ran after me shouting!! ? ‘

‘I was canal running today and I had to give way to every cyclist. I ended up standing in the bushes and no one said thanks one even shoulder barged me! God knows what’s wrong with people!’

‘Usually i have no issues but I had a guy telling his dog to ‘get’ me last week and let him off the leash (luckily the dog was not interested) and i also had a wee boy kick a football at my feet a few weeks ago. I was moving at a snails pace so was able to stop myself falling x’

I’ve long listened to people complaining about cyclists on the roads, (and at time berated the foolhardy bikers riding three abreast near our house) and always been glad that I was a runner and didn’t have to deal with the sort of hatred that seems to occur between drivers and cyclists. Yet it seems that there is a similar aggression between pavement and path users against runners.

A couple of years ago it seemed like there was some commentary on the Jeremy Vine Show about the aggression of runners towards pedestrians, well now perhaps the aggression has flipped?

But what can we do about it? Other than being considerate road/pavement users, I really don’t know. I generally follow the below guidelines;

It seems that a few runners are giving the rest of us a bad name, or perhaps it’s a stereotyping that we’ve been given as ‘militant’ and ‘lycra louts’. This article in the Scotsman does not paint us in a good light. However, it doesn’t share anything from the runners stand point, nor does it suggest how we can more harmoniously share space.

Wanting to leave this on a light note, I found this tongue in cheek secret ten-point guide given out to non-running pedestrians on RunBundle. ?

Have you ever had any bad experiences out on your runs?