Originally, I should have been at Love Trails this weekend, giving a talk about mental health, camping, running and hanging out with fellow runners. However, after fretting about the fact that we’re moving house on Wednesday and an exam on Friday, I realised a couple of weeks ago that spending a weekend at Love Trails was just not feasible.

So with a long run on the plan, when I was invited to take part in the Virgin Sport British 10K, it seemed perfect. I was also asked to be part of the #Westminster100, celebrating 100 years since the suffragette movement when some women in the UK were given the right to vote. The event was also aimed at increasing awareness of the fact that there are still women around the world that don’t have the same rights as men, with multiple countries where women still aren’t allowed to vote. The fight is not over.

Check out our prime position for the photocell – I totally didn’t mean to. Infact, we were right at the back of the pack and didn’t think they’d take the pic from the angle they did!

I did also get a selfie with Dame Kelly Holmes! 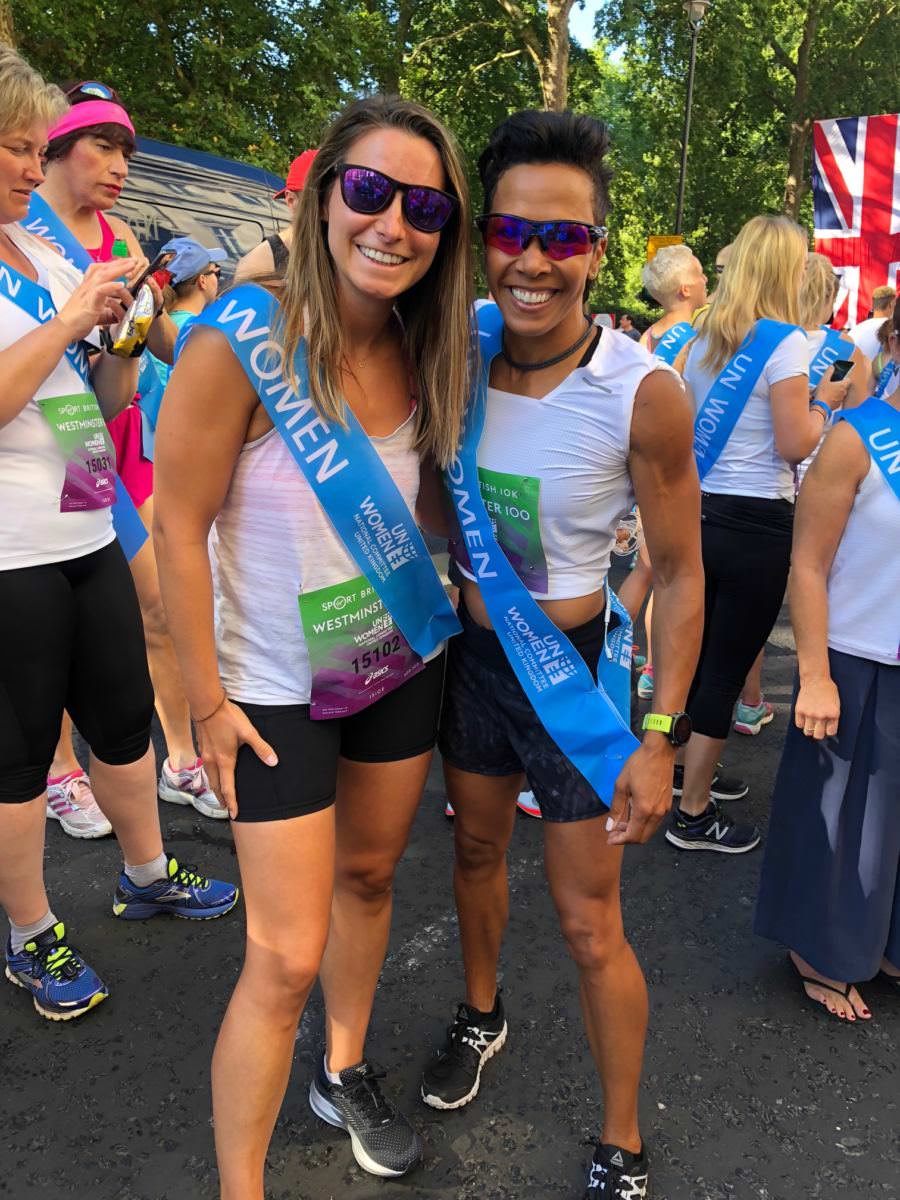 My coach suggested I use the race as this week’s tempo run, and race the 10K before completing the rest of my long run. With that in mind, I looked up my 10K PB, set back in November 2015 : 47.58. After seeing that my pacer mate, Paul, was the 45 min pacer, I told him I tuck in behind the group and hold on for as long as possible.

When he said they’d be running 7.10 pace, I questioned whether I should stick to that plan but I thought that all I could do is run my fastest and see what happened.

Well, I lost sight of Paul within half a mile, and knew that it would be a battle to the end.

Mile 2 is downhill and should have been a little faster than that.

Mile 3 is uphill, so I was expecting it to be slower, however seeing an 8.40 pace pop up on my watch wasn’t ideal. Still I pushed, knowing that once this mile was over, I would be halfway done. There was water at the 3K, 5K and 8K marks. I would take a bottle, drink some and pour the rest over myself. I struggle to drink enough during races as I prefer to sip slowly but I also didn’t want to carry the bottle so I figured I could rehydrate afterwards.

They had Nuun at the 8K station which was well received – although I saw a few people pour It over their heads before realising it wasn’t water!

Mile 4: 7.19 downhill and a second burst knowing I was turning back to the finish.

This was a low point, and I just tried to push as hard as I could. Mile 5 runs along the embankment with little shade. It brought back memories of this stretch during the London marathon, but instead of turning right at Big Ben, you go for an out and back over Westminster Bridge. It’s awesome when Big Ben isn’t under scaffolding!

With less than 400m to go, my shoelace came undone. I had to stop and tie it which slowed all momentum, despite the fact that it only took me a few seconds to retie the shoe but my legs felt like lead when I started running again.

I was disappointed that there wasn’t a 400m/200m countdown, just the finish line down the street. I knew that I was close to my PB so just pushed with everything I had for that final stretch.

It’s not much, and I had higher hopes for my fitness esp given the fact that I’ve been running in the heat a lot recently, however I just didn’t have more in me today. I’m proud that even when I wanted to stop, slow down, walk…I didn’t. I switched over my Garmin which seemed to be going a bit berserk with the buildings (or maybe it’s just getting old and time to buy a new one?!) to average pace, and focused instead of the current pace, to prioritise keeping average pace to under 7.40. 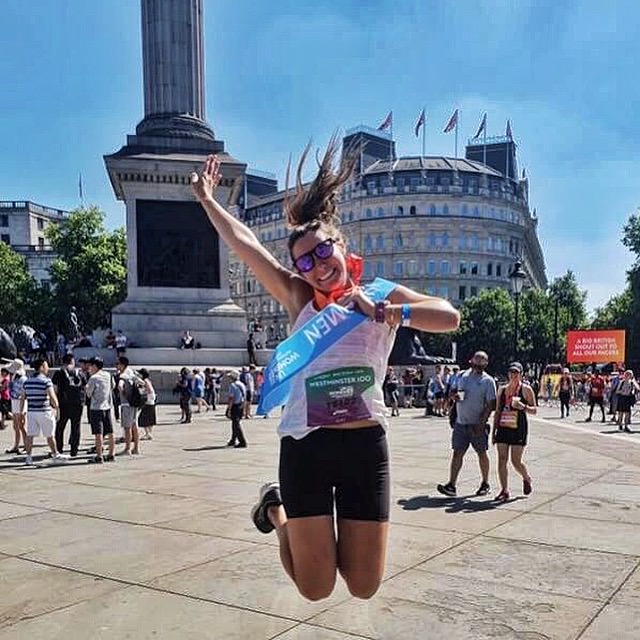 Overall, I think the race was really well organised, with friendly volunteers and great signposts. It was a bit disappointed that the corrals weren’t well patrolled, and no-one was checking the bibs, so there were lots of people in the wrong starting place. I also heard that some people didn’t start for an hour, waiting in the heat to start!

They did provide water in the corrals, and had plenty of loos (the queues were really, really long) but they moved quickly. The medal was a little bit boring… 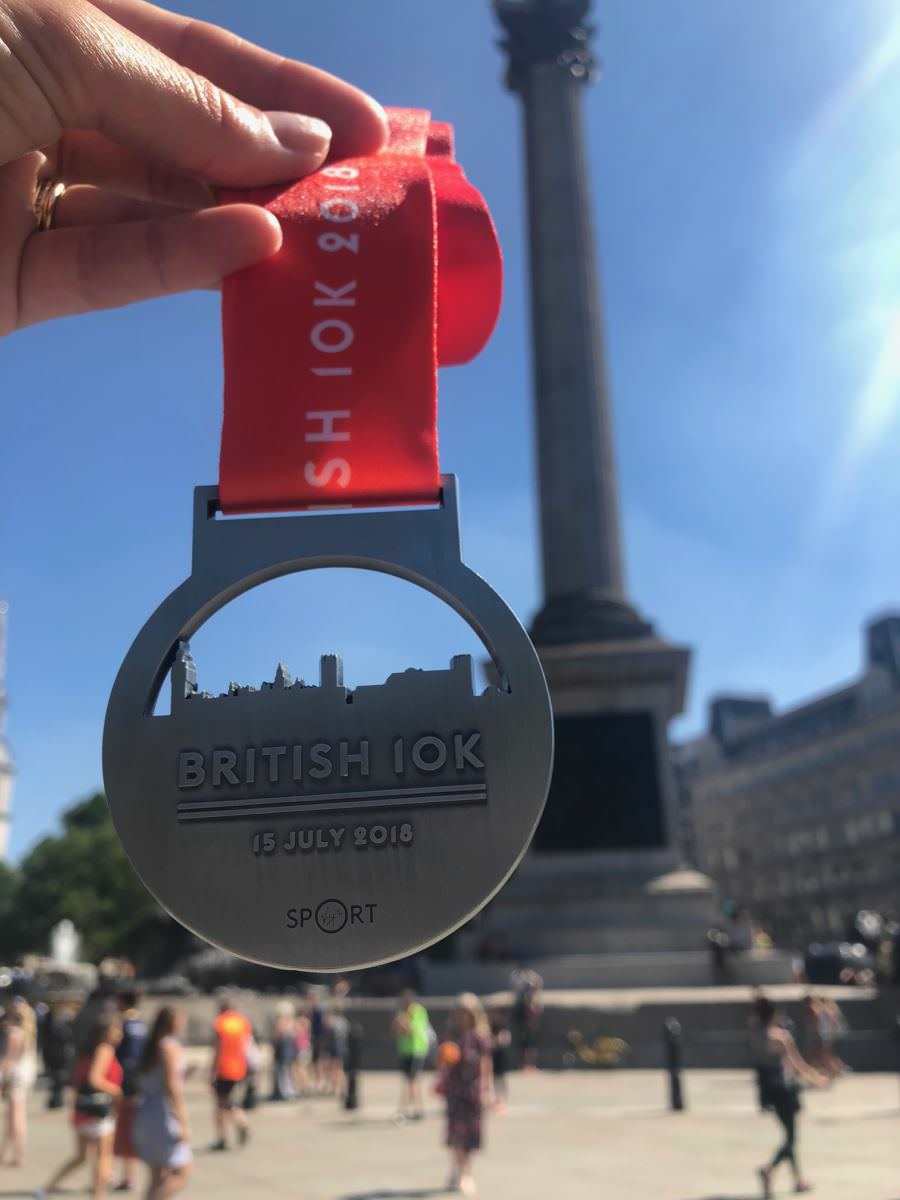 Post run I bumped into Baze immediately after crossing the finish line (he watched me lean on the railings for quite a few minutes after finishing), then together we walked back to the bag drop area. I drank plenty of water, took some pics and gave my medal to Elle so that I could run back to my car and finish off my miles for the day.

9 and a bit very slow miles through Hyde Park to Hammersmith, then along the Thames back to my car at 9.59 average pace – such a SLOG. I was just so pleased to be done.