One of the attractions of the Akaroa Bay are the wild Hector’s dolphins that reside there. They are the world’s smallest and arguably, friendliest dolphins. Unfortunately they are also extremely endangered. Apparently they are in the same category as the Bengal Tiger! Have you ever even heard of them? I certainly hadn’t.

They are native to New Zealand, with a current population of around 7000, down from 30,000 thirty years ago. 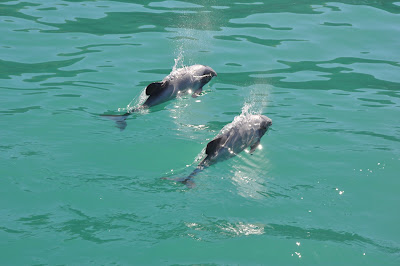 As part of the protection plan for these dolphins, the NZ government issued 8 permits to local companies to take tourists out to see the dolphins either as part of nature cruises, or special trips to swim with them. As part of this the companies pay a fee towards the conservation area, in addition to a percentage of our trip fee. This area includes the Akaroa Bay and 4 nautical miles out to sea where commercial fishing is not allowed. Unfortunately the dolphins inhabit up to 12 nautical miles so there is still some way to go to protect these dolphins!

Our group met on the boardwalk at 8.30am and were kitted out in 5mm thick wetsuits. They were pretty hard to get on and certainly not very flattering! 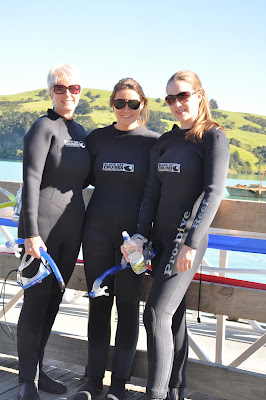 The wetsuits were double thickness to protect us from the cold Pacific waters! We were so lucky with the weather though, the sun was shining and it was 25 degrees by 9am! 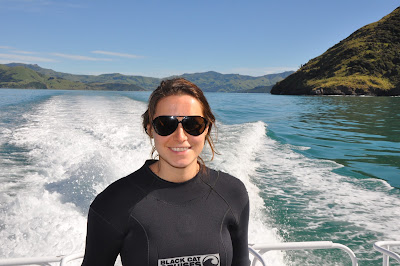 We took the boat out into the bay on the look out for dolphin pods. The boat was specially designed without a propeller to ensure that they weren’t dangerous for the inquisitive Hector’s dolphins. We were told that we were looking for friendly dolphins that swam up to the boat to investigate what was going on, and that we should make a noise in the water by blowing into our snorkels or tapping them together to attract the dolphin’s attention.

Once we came across a friendly pod we got ready to get into the water. It was freezing! 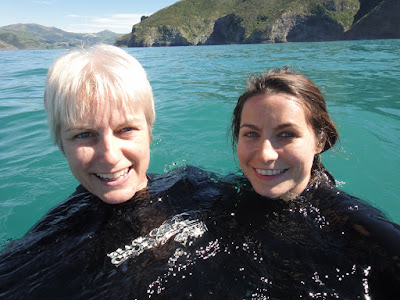 Char and I hung out to one side of the group and rewarded with loads of friendly dolphin visits. We also tried singing through our snorkels- making up a song for the dolphins;

Little Dolphin (sung to the tune of Little Donkey)
Little dolphin, little dolphin,
in your dusky sea,
got to keep on swimming onwards,
come and cuddle meeeee! 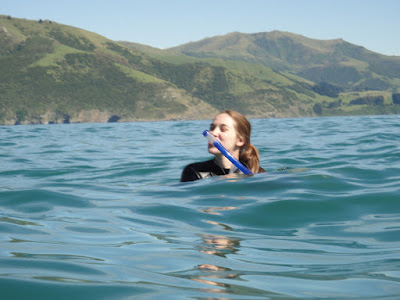 It seemed to do the trick and we got to swim really close to lots of playful dolphins. The dolphins are completely wild and aren’t fed by anyone. We had to be careful not to touch them incase we damaged their delicate skin or passed on any infections that could be harmful to them. 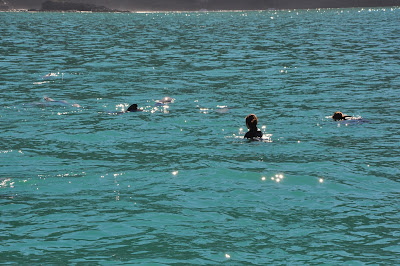 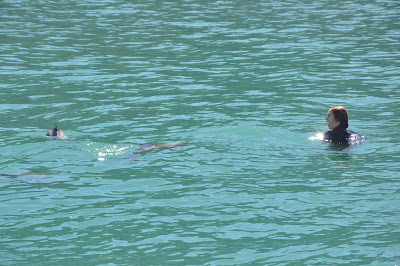 We were also lucky enough to have a mother and baby swim past us. Apparently the baby was less than a month old- you could tell by the darker lines over the baby’s body! 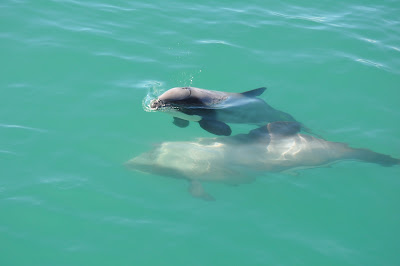 Dave had surgery on his shoulder about 6 weeks ago so wasn’t swimming. He managed to get some great photos from the boat. 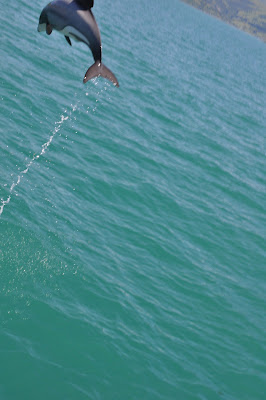 There is a limited time that you’re allowed to be in the water, and after about 45 minutes we came back onboard and enjoyed hot chocolates in the sunshine to warm up. Our guide told us that we were lucky to see as many pods as we did, and that they were very very friendly that morning. I think it was partly the gorgeous weather, and obviously our amazing singing! 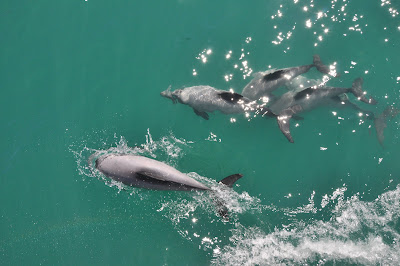 This was my first time swimming with dolphins, and it felt so special that they were completely wild. It didn’t feel forced like I would imagine it might in some other experiences. I would highly recommend it as an activity that most people would love, our group were so excited whenever a dolphin came near.