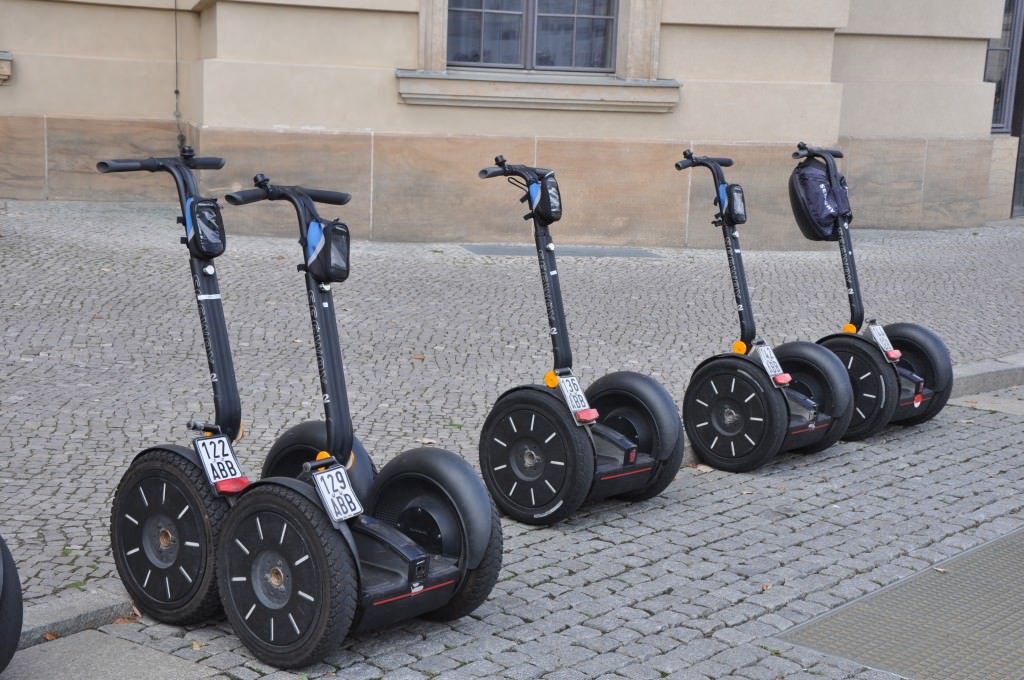 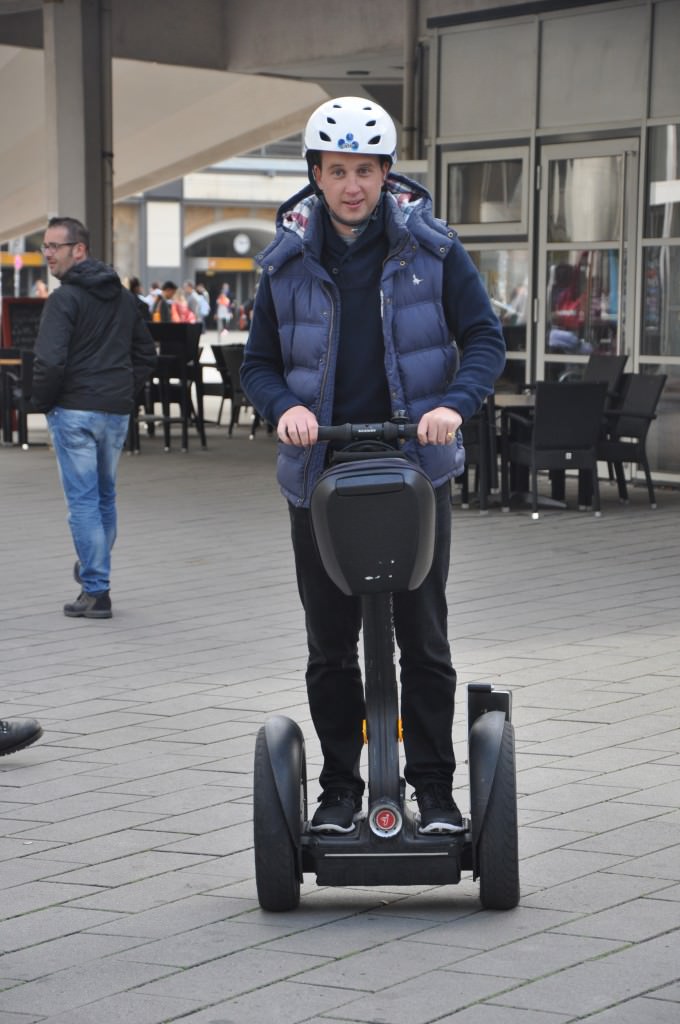 We arranged a Segway tour around Berlin for the Saturday before the Marathon for two reasons; one- I felt like my legs had been sore after walking around Paris a lot before the marathon, not the ideal way to start 26.2 miles, two- we’d tried to do a segway tour in New Zealand a few years ago but they were fully booked, and we were keen to try them. I had however forgotten just how accident prone I am, and how mal-cordinated I can be. I was the only one in our tour doing the marathon, and of course, the only one to fall of the segway… twice.

Luckily I wasn’t hurt, just a little shaken and very embarrassed, and the bruise didn’t affect me on marathon day at all. Plus the tour was a lot of fun.

We started with a warm up session, learning how to use the segways, get on and off, go over speed bumps etc in the relative safety of a pedestrianised area. Our small group were all really friendly, but it was still intimidating having to go one by one to demonstrate your capability on the segway. Half an hour of zipping around and we were ready to be let loose on the roads. We would travel to a location, mostly using bike lanes so it wasn’t too scary, before hopping off the segways and learning a little about the location and its history. 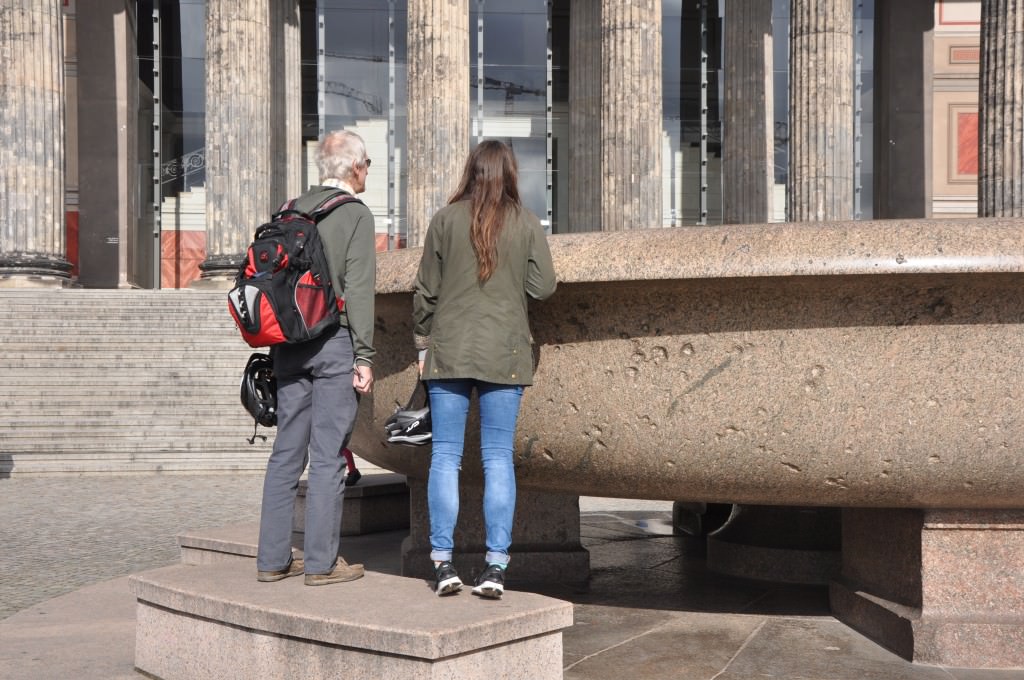 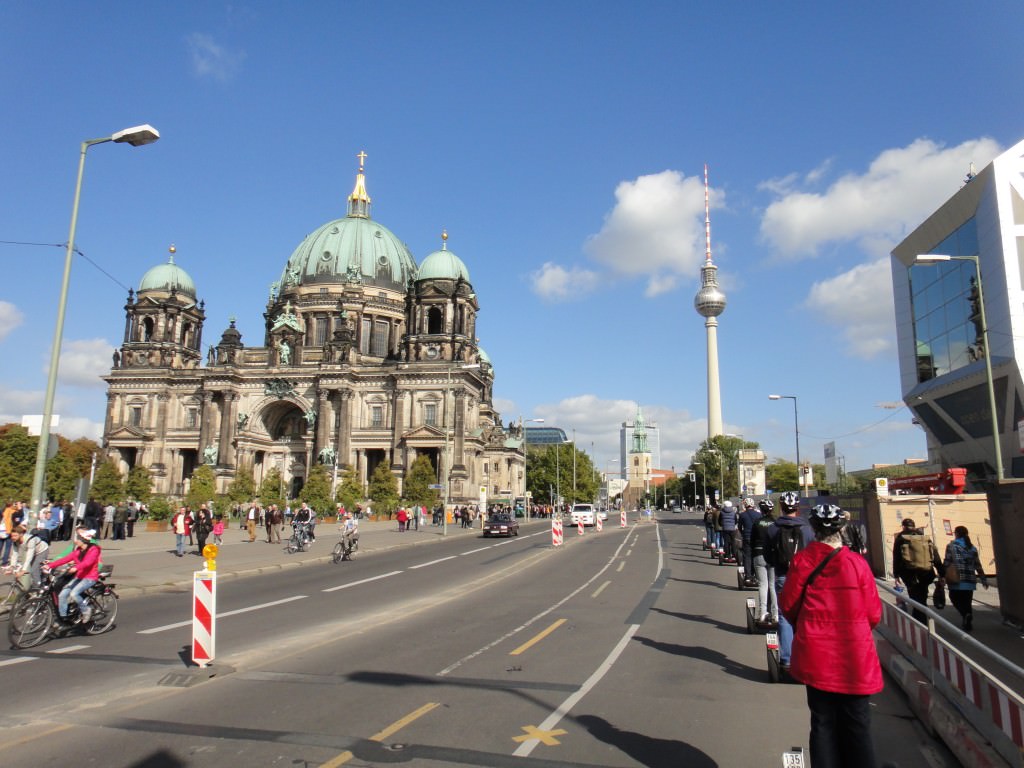 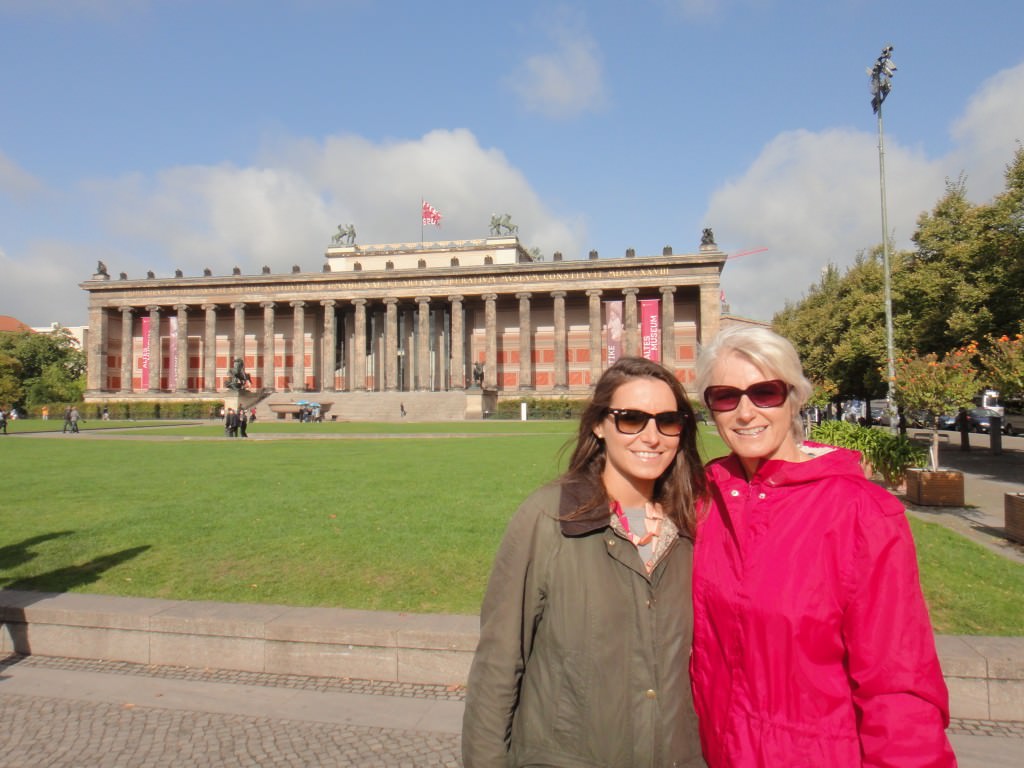 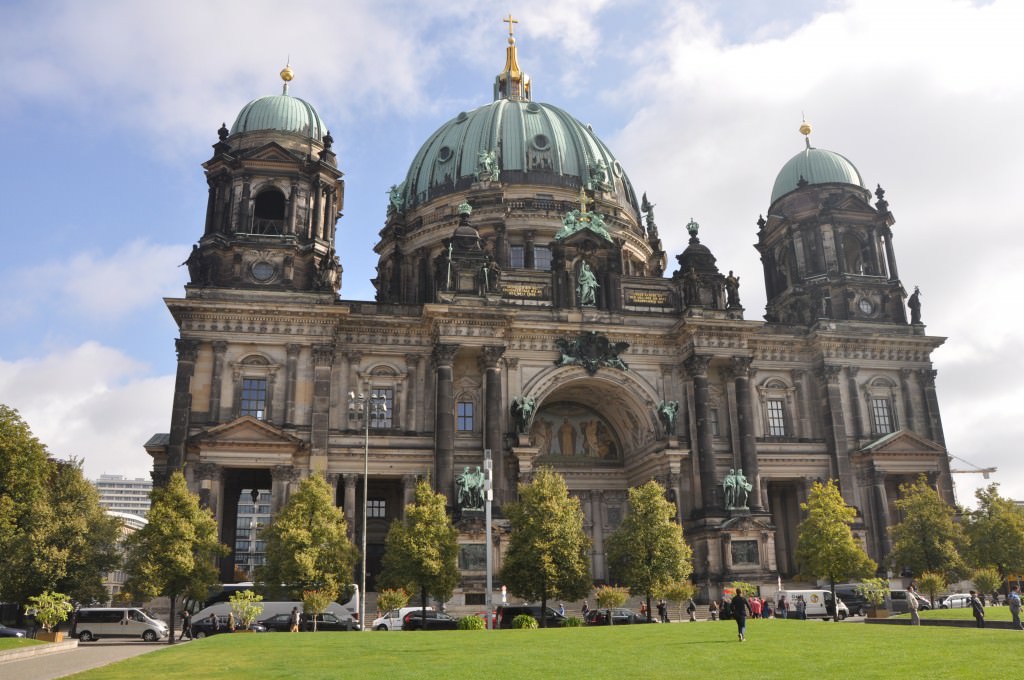 First stop was the antiquities museum, where we got up close to the big marble bowl outside- they’ve left the bullet holes in it, and in numerous places around the city as a constant reminder of what happened during the war.

One of the highlights of the tour was Checkpoint Charlie, an American checkpoint station along the Berlin Wall. We had a little time to explore the museum that talked about the ways in which East Berliners tried to cross the wall, some successful, but many not. It’s horrifying to know that this happened not too long ago, and that the border guards had a shoot to kill policy.  As part of the tour we also visited a Sentry watch tower, and another part of the Wall, where we heard about a man who zip lined his family to safety from the East to the West side. 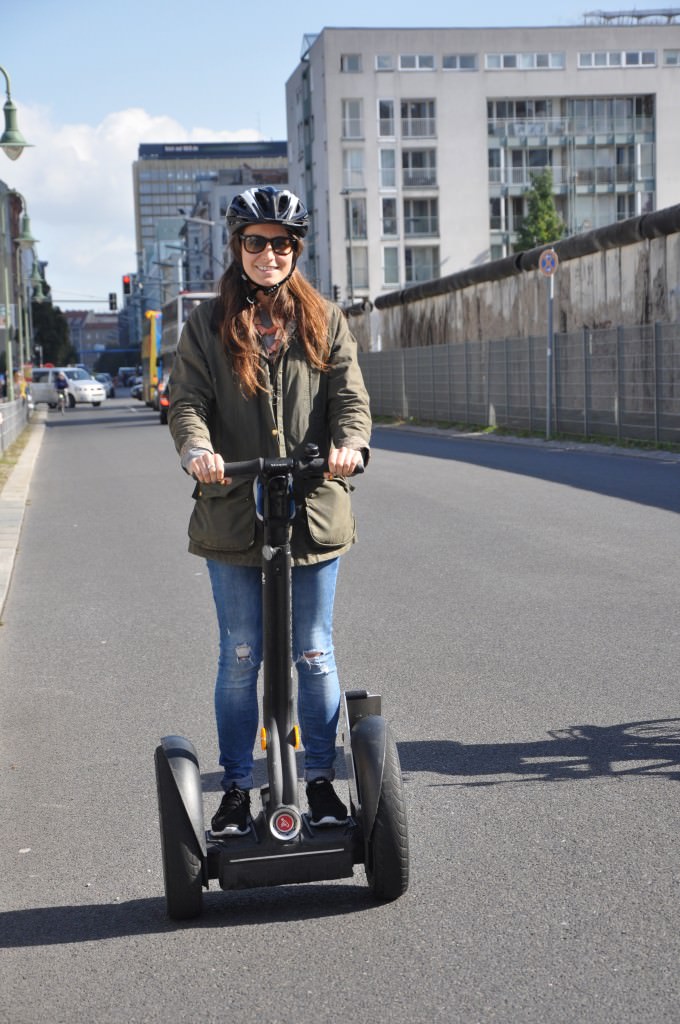 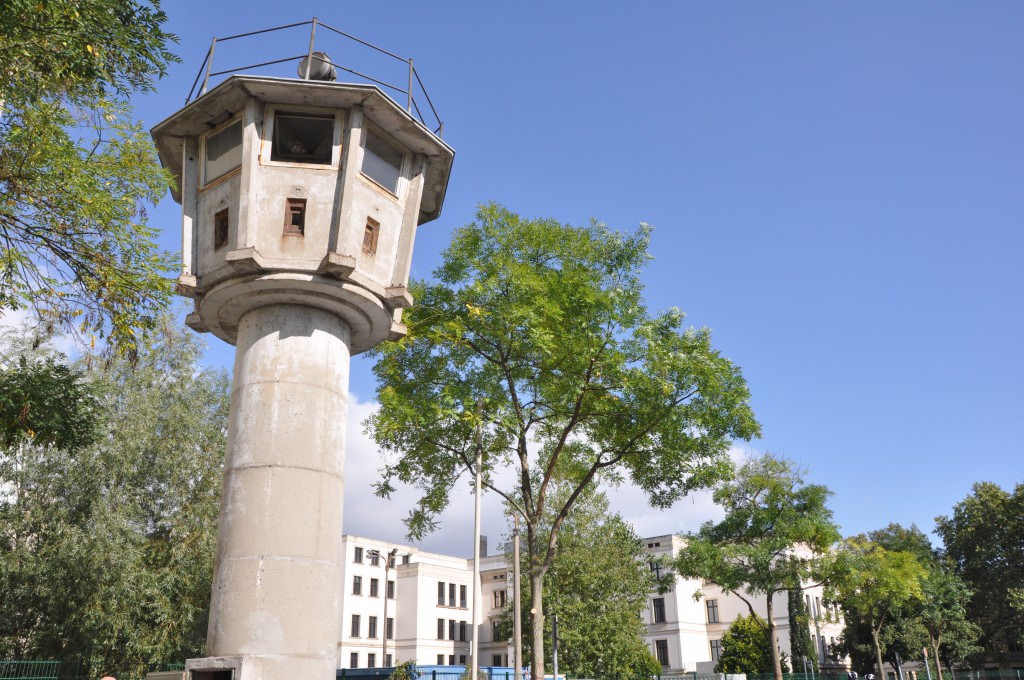 Other points of interest along the trip were an art installation to remember the burning of the books, and the Memorial to the Murdered Jews of Europe. Both very stark and harrowing. On my last trip to Berlin I visited the museum below the memorial, and although incredibly upsetting, it is worth a visit. 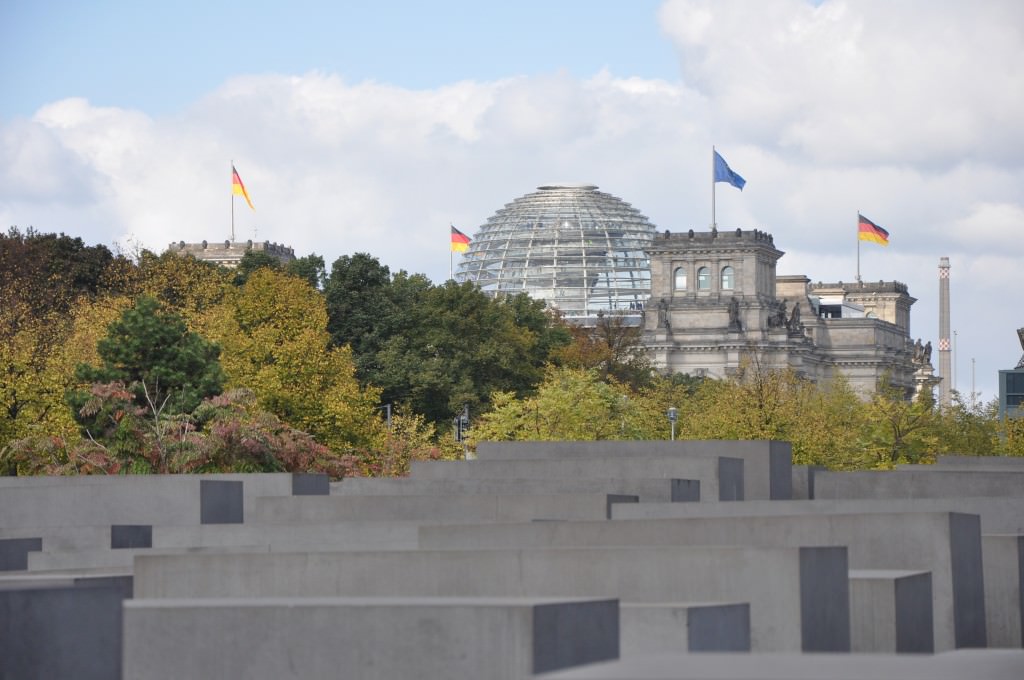 The last stop on the tour was the Brandenbourg Gate. This was of particular interest to me as I knew the next time I would be seeing it, I would be running under it during the final stage of the Berlin Marathon. The area was cordoned off, with a lot of setting up for the following day going on, including the all important beer tents. 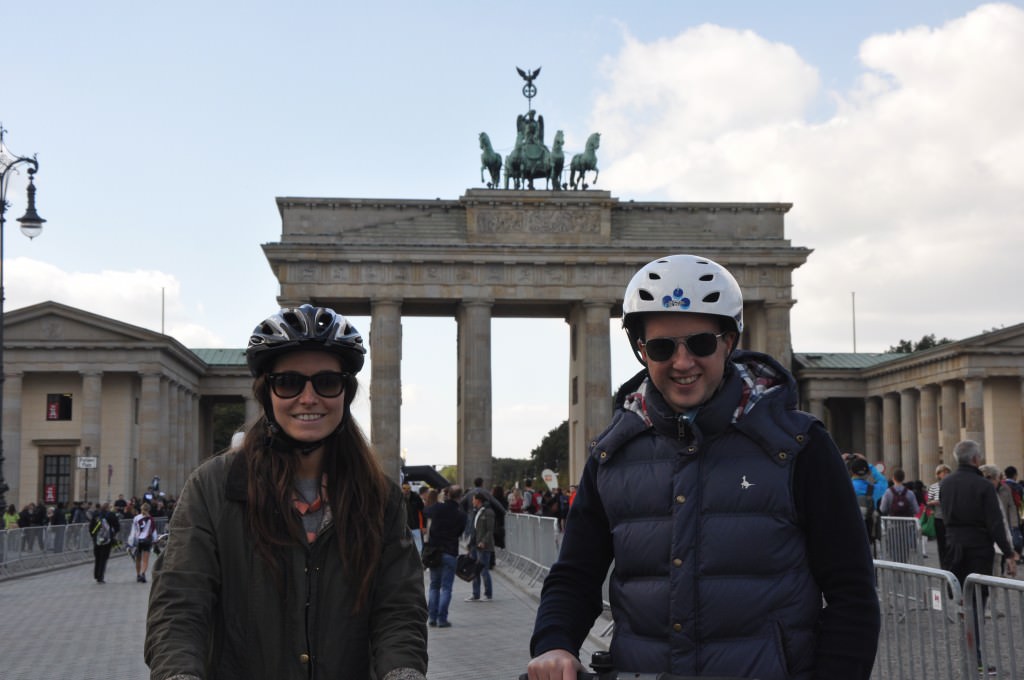 I cannot recommend a segway tour of Berlin with Fat Tyre tours enough, it was a brilliant way to see the city, and learn about its history. We also picked up some interesting facts that I don’t think we would have found elsewhere. For those that aren’t sure of a segway, they also offer cycling tours too.