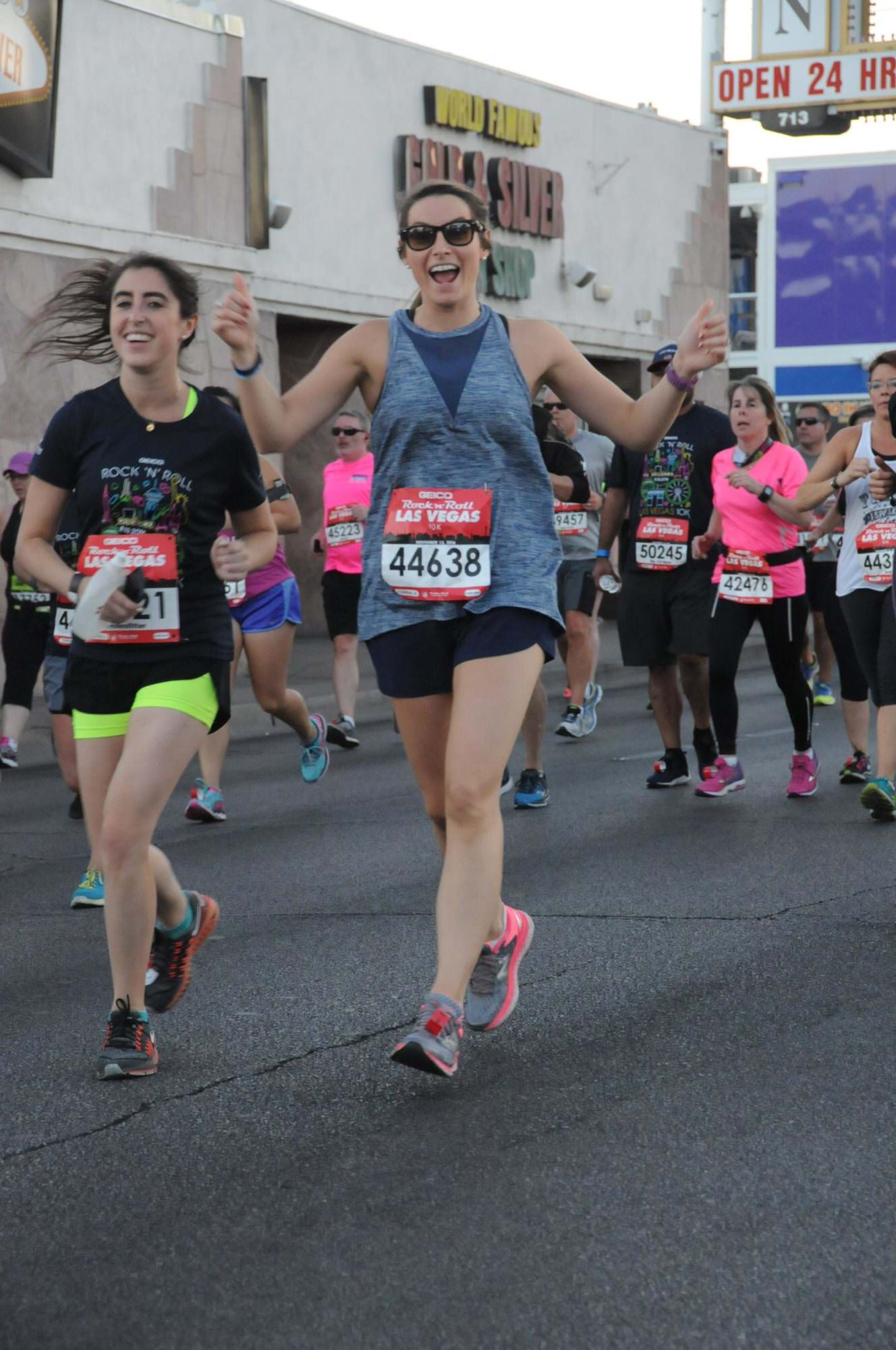 I’ve told coach Mary that I will run SLOWWWW, the only way I convinced her to let me run the Rock N Roll 10K, and it seems like my body won’t let me move any speedier anyway. How on earth did I run 26 plus miles last weekend?

We’re running as a pack of 5500, out of the Las Vegas that we all know, and towards downtown, past the wedding chapels made famous by Friends, The Hangover, and Britney Spears. 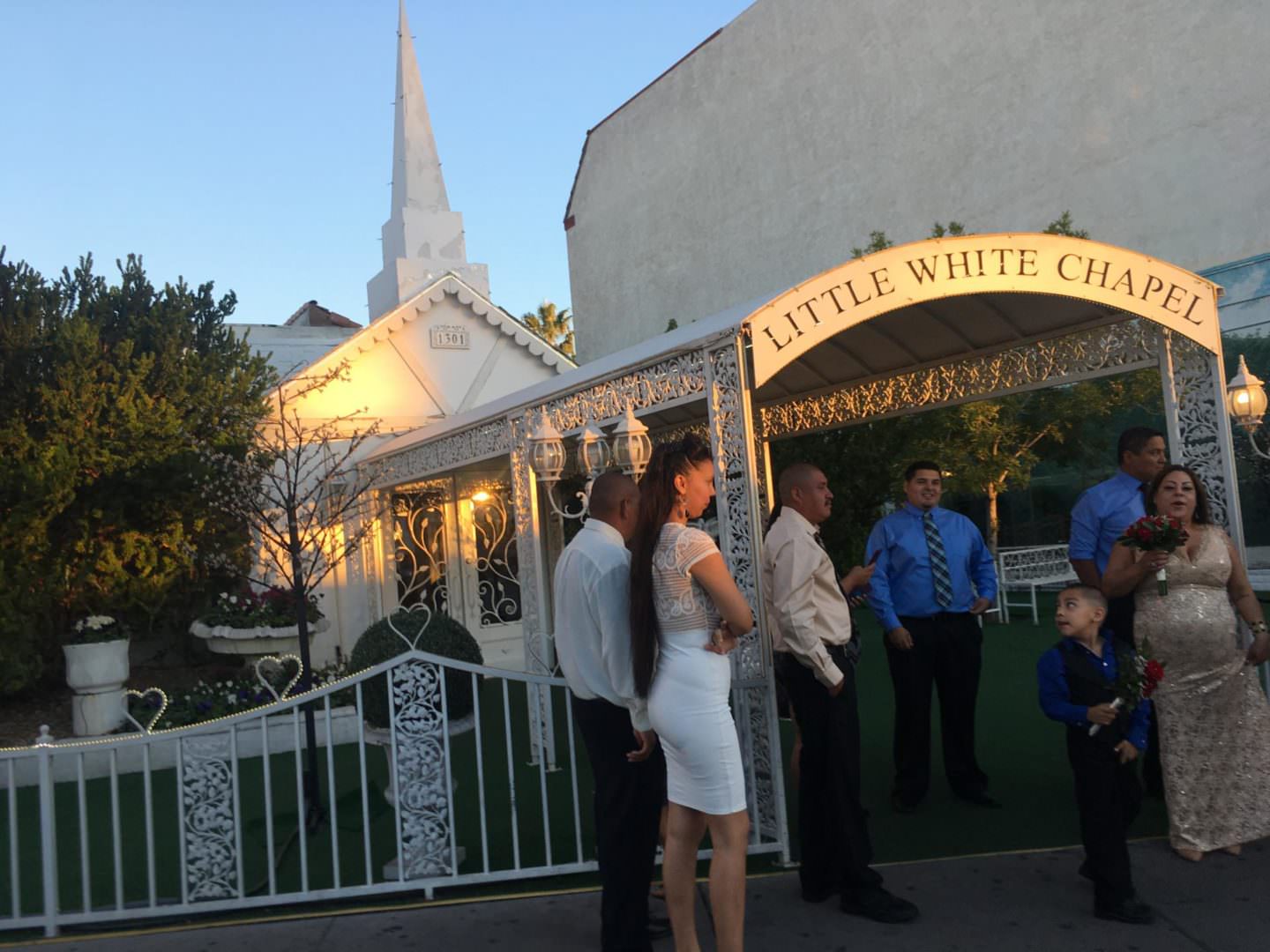 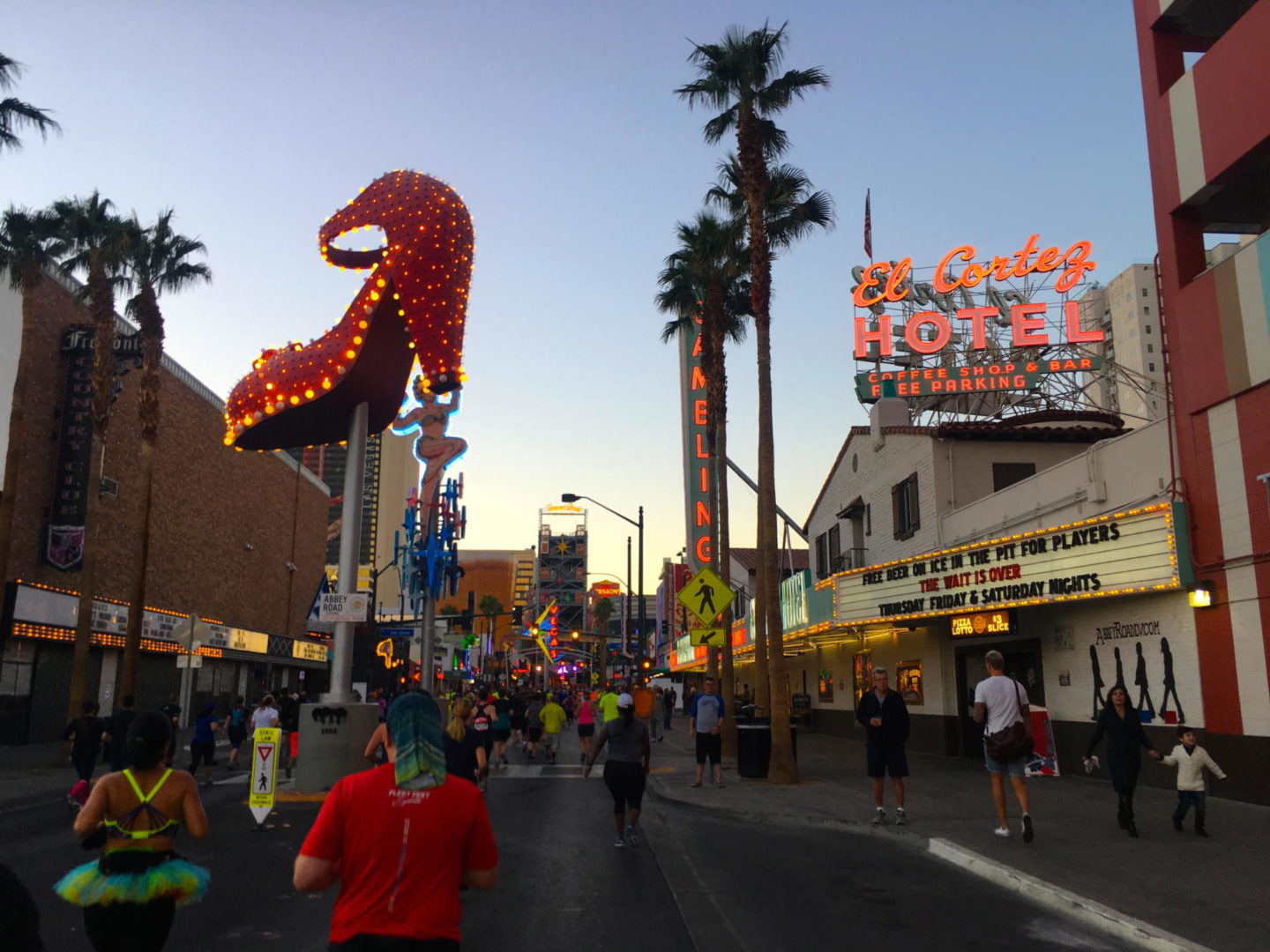 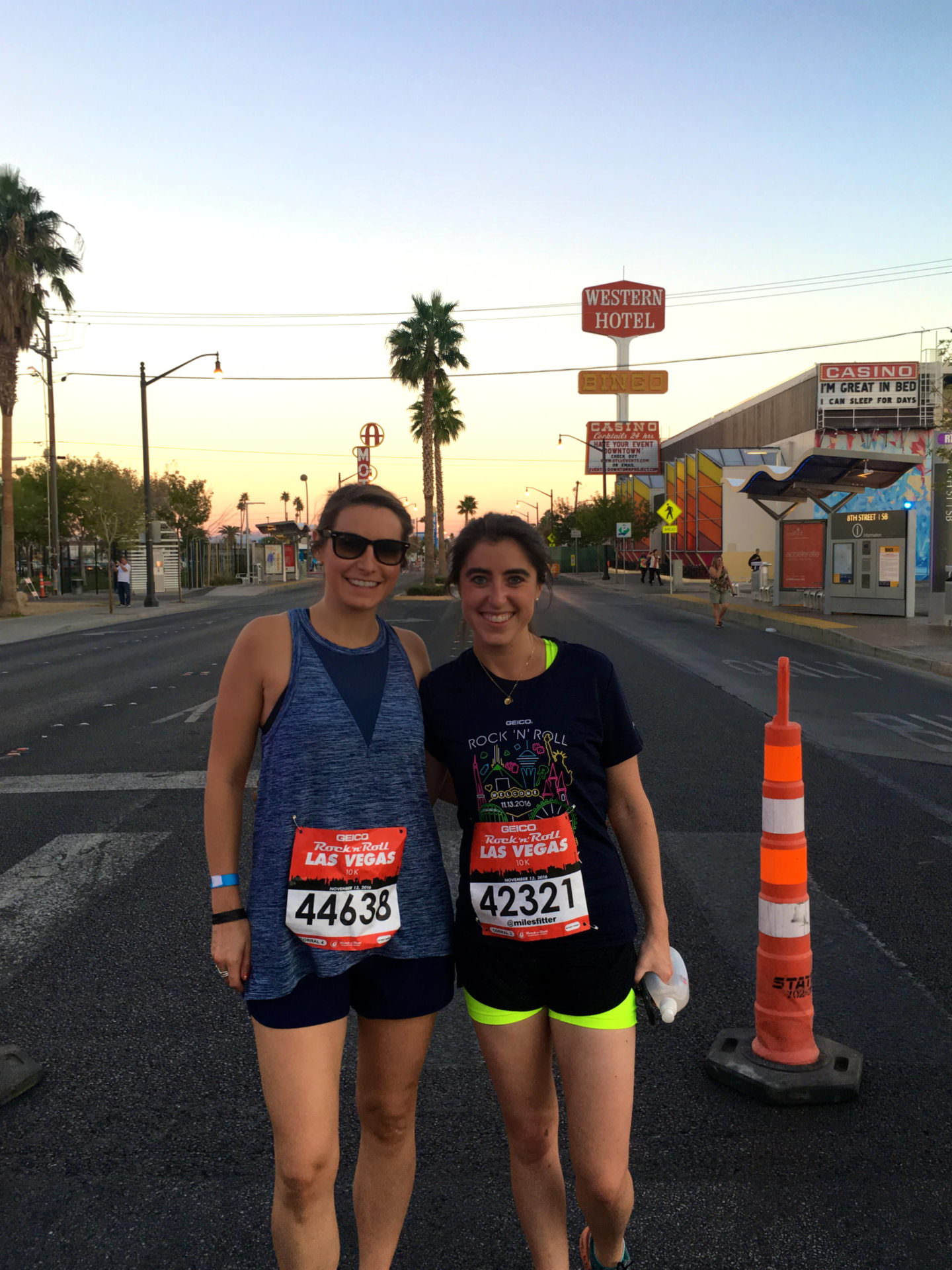 I’m happy to stop for photos with Zoe, one of the sunset taken by a friendly policeman, another by a sign for Vegas in Downtown, I can’t stop smiling. The sun is going down as we make our way back towards the strip… (trying to ignore the glint coming off Trump Towers). 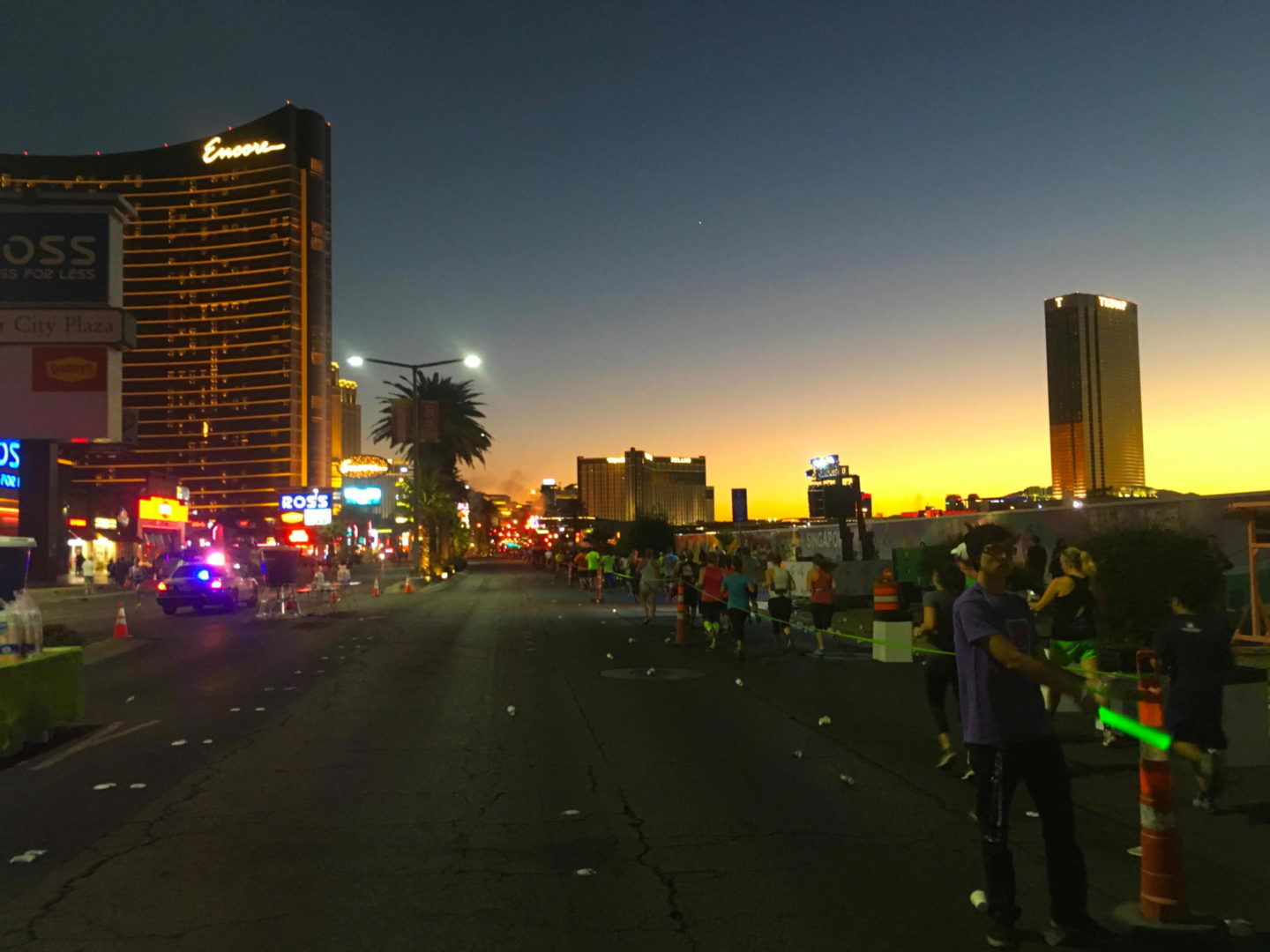 Despite my lack of pace, there is a smile plastered over my face, and I am remembering the love I have of running, and in particular, of being part of big races. I love the camaraderie, the atmosphere and the achievement that comes with crossing the finish line, no matter the distance. The memories of the last few painful miles from the New York City marathon are fading away with every step.

And suddenly, it’s not so hard to speed up. My legs feel lighter, and I bound along the side of the course – dancing to the music played by the numerous bands dotted along the sidewalk (this is the Rock N Roll 10K after all!) 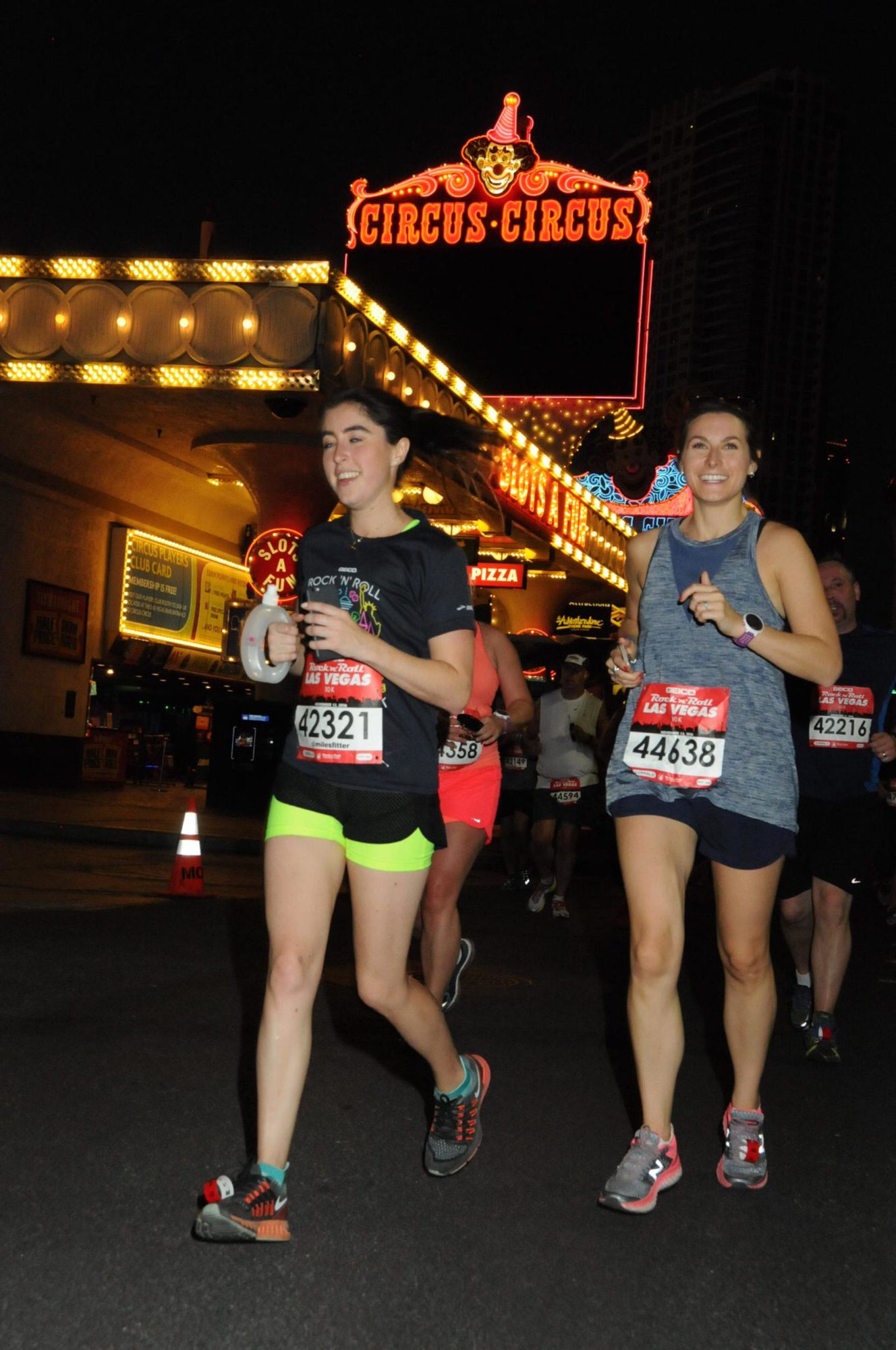 After my terrible race photos from the 5K, I decided to use my phone instead of GoPro for pics, and actually stop to take them – plus it seems the race photographers were out in force. This is only my second ever time of buying the race pics (the other time was for the London marathon, my first ever 26.2- They can be super expensive, hence my reluctance in the past but I’ve got a blog on how to get cheap race photos coming up!)

I did slow right down again after a surge of speed when I remembered Mary’s advice, and knew she could track me to ensure I was sticking to the plan. It was such a fun race, and the course was a big improvement on the 5K, however I couldn’t help but feel envious of those running the half marathon, surging up the other side of the strip. The 10K route has you on the main strip for only about a mile, whereas it seems that at least half (if not more) of the 13.1 race is run alongside the casinos, bars and hotels.  The strip itself is only shut down to traffic twice a year, for the RNR race, and for New Year’s Eve (I can imagine NYE in Vegas must get a little crazy!) 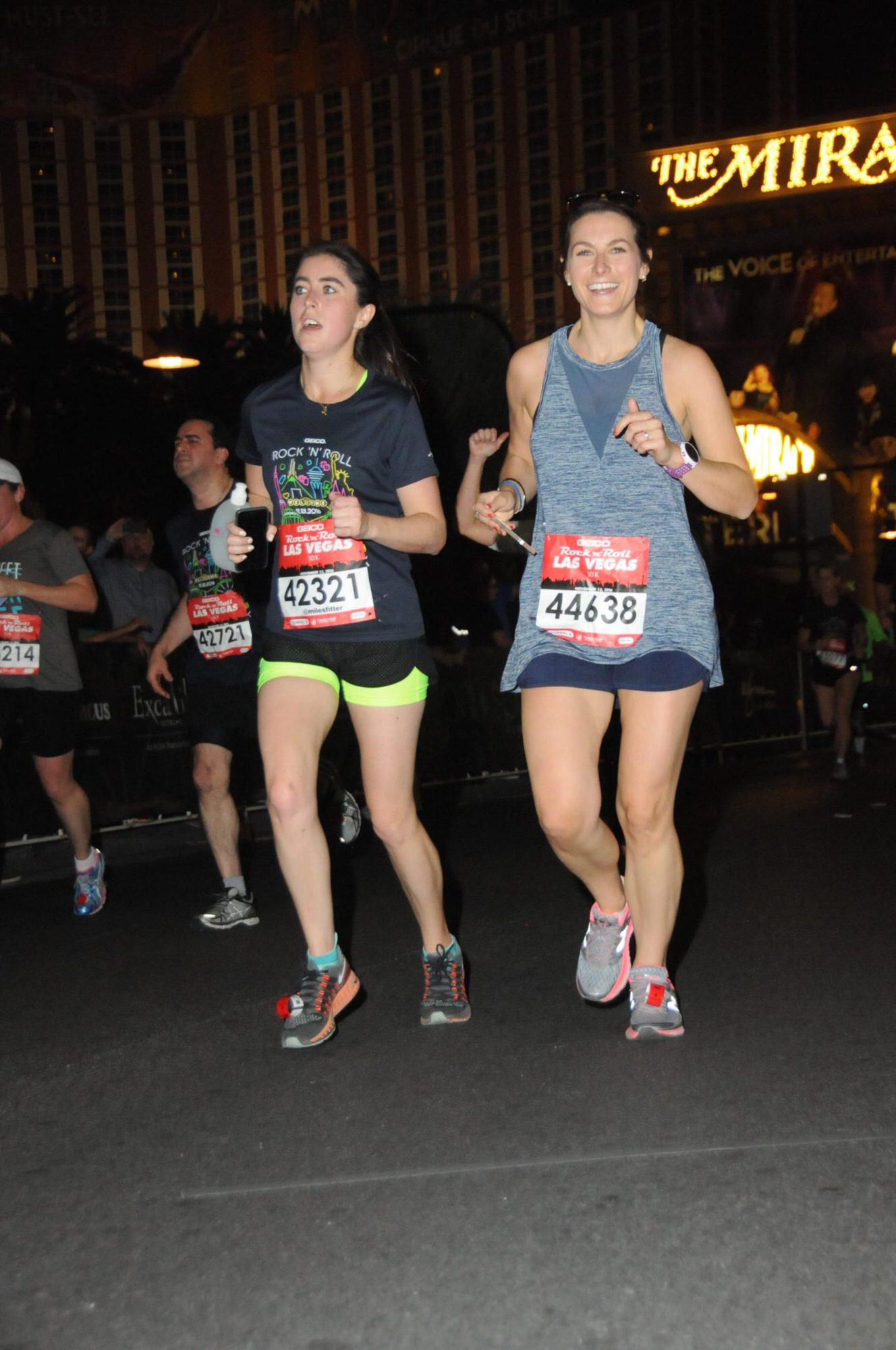 I loved running with Zoe, we were able to run all three races in one week side-by-side, so lovely since I only get to see her about twice a year now that she lives in NYC (although you might have seen she was in London with work yesterday so we ran together then!)

Crossing the finish line, side by side (although we have the same finishing times, somehow she finished 1 runner ahead of me??! maybe it’s the surname, can’t wait to move up the register when I change my name in September!) 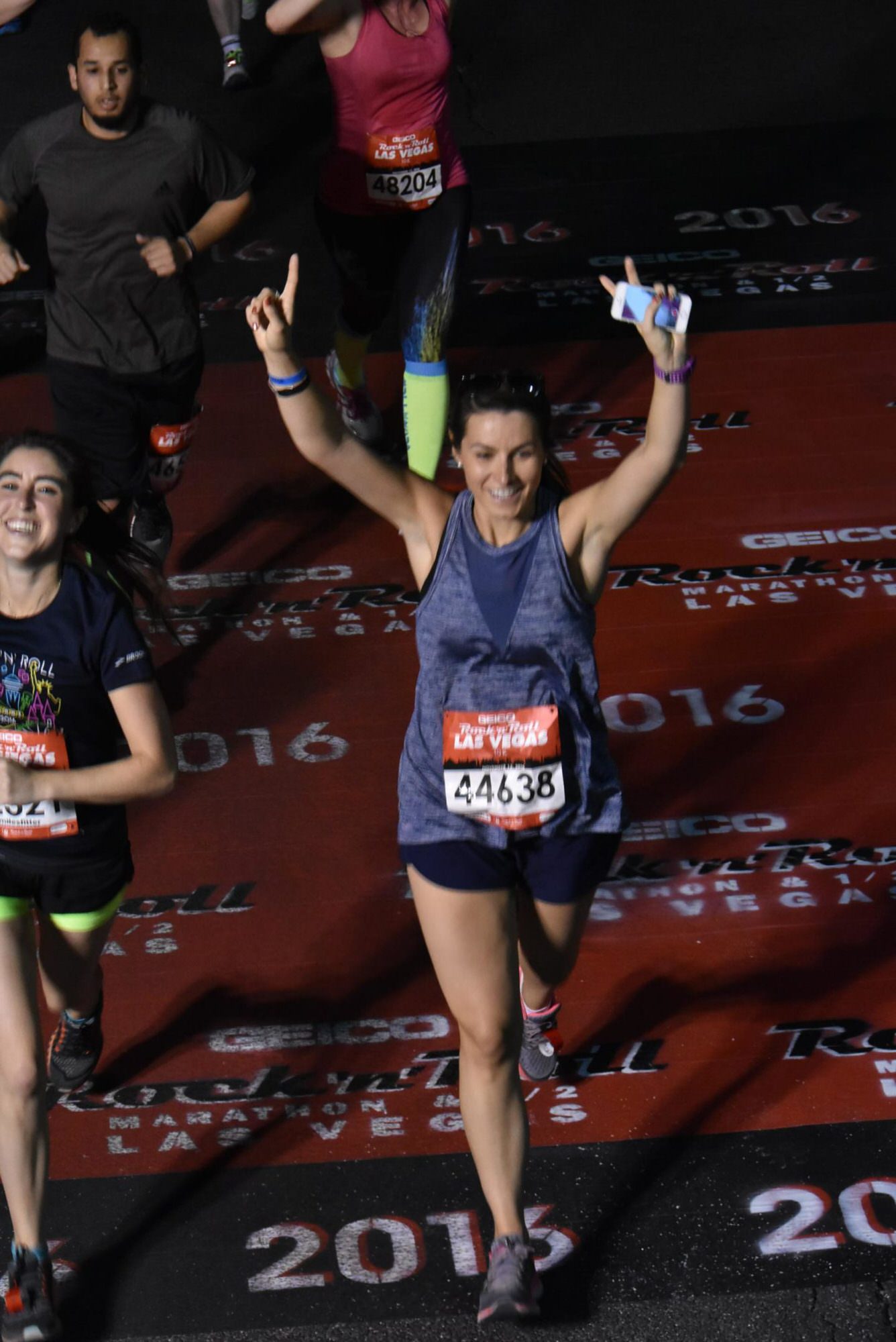 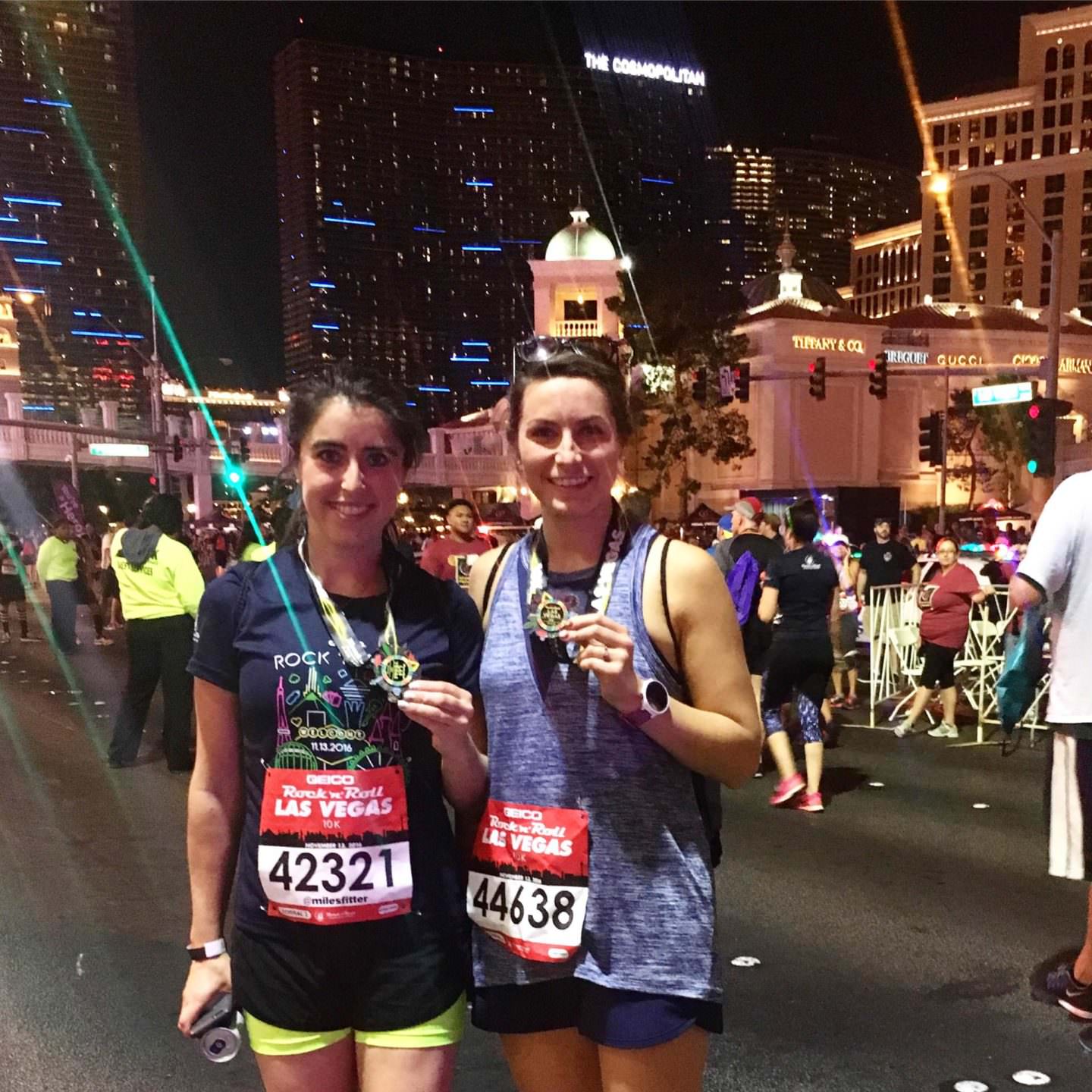 And certainly kept my promise not to push the pace. It was just what I needed, knowing that I don’t have time ‘off’ after New York in the same way I have after every other marathon. This time it’s pretty much straight into Tokyo training for Feb 26th. There are 14 weeks until I toe that start line, and I want to feel amazing. I’m going to be vlogging my weekly runs so watch this space…

After finishing, we enjoyed a lot of free chocolate milk (we might have circled back twice to get more freebies), collected our bling and goody bags and tried to make our way to The Venetian. I was meant to meet up with Jess but a combination of zero phone service and thousands of people meant that our fall back plan to meet up at the hotel was put into action.

She found me in the bath in my bikini, wearing my medals, drinking champagne. Standard. 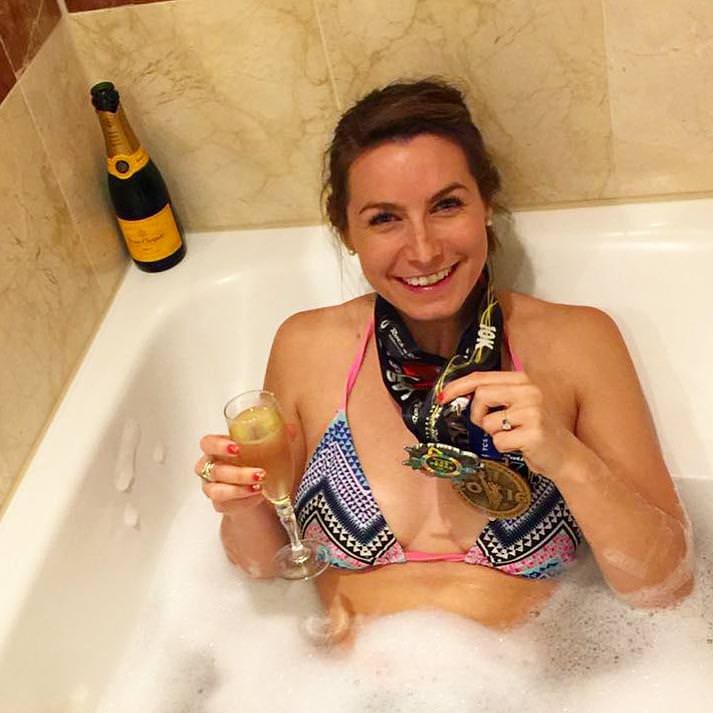 The lovely folks at The Venetian had left us a bottle of welcome fizz in our room, which we’d saved for our final night. They also laid out a spread of fruit, water and Gatorade for the runners returning to the hotel after the 10K, Half and full marathons – such a cute idea. I had a lot of drunken partiers asking if I’d won the race… maybe next year 😉