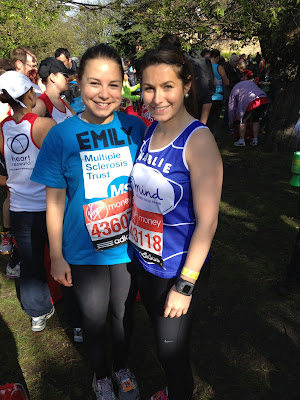 On Saturday night I stayed over at Emily’s house where Amanda cooked the three marathon runners a carb heavy chicken and pasta dish followed by ice-cream. We made our last checks, updated Emily’s ipod and decorated her running top.
We were up at 6.50 to get ready, hydrate and eat our pre-marathon breakfasts, toast with PB and banana for me, porridge for Em. Emily’s dad then kindly drove us to Waterloo, where we met up with Joe and made our way to Greenwich, via the Waterloo loos!

Once at Greenwich we followed the crowds to the Red start area, handed in our bags and got in the massive line for the loos. The queue was so long that we were actually still waiting when the marathon officially started! We managed to join the middle of the Group 9 runners and crossed the start line about 10 past 10- 25 minutes after the official start. 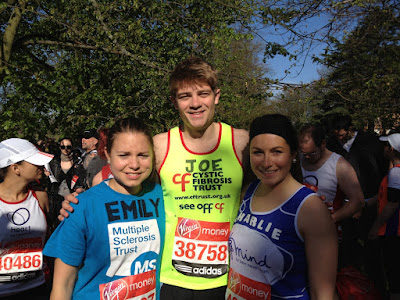 After crossing the start line it was pretty hard to get a good pace going, with lots of people in fancy dress and power walking!? We tried to keep an even pace, and dodge around people without going out of our way. We ended up having to dodge around people for most of the race annoyingly, adding an extra .35 of a mile to our marathon total! I also had a bit of an altercation with one lady that I passed. I guess next time (will there be a next time, who knows?!) it would be better to start further up in group 7 or 8!
We kept a steady pace for the first 6 or 7 miles, about 11 min miles. This is slower than we were originally anticipating, but with both of us nursing injuries, we wanted to keep the first half of the race slow to avoid burning out before the end. About mile 7 we saw some of Emily’s friends cheering us on, this really spurred us on, and when I looked down at my Garmin I saw that we were running under 8 min mile pace. Whooah. We slowed down pretty sharpish!
We saw my Mum and Dave between mile 8-9, in the same place that I had watched from last year. So good to see them and grab a lucozade. 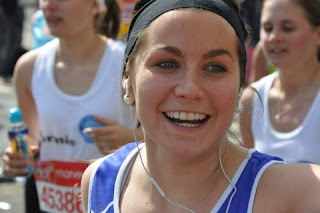 At mile 10 we saw another friend which gave us another boost, so fun whooping and feeling strong! It was so exciting to see the miles flying by! Mile 12 was over Tower Bridge, an epic landmark that I always loved watching as part of the marathon on TV, and I was so overwhelmed to be at that stage of the race. I kept looking around taking in the crowds and our surroundings. I was thrilled to see 2 friends from Uni in the crowd, such an unexpected surprise. 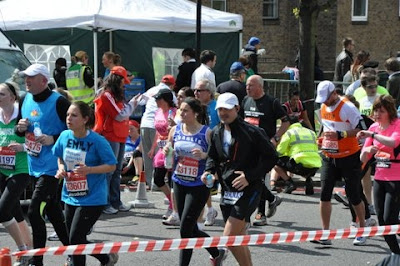 During Mile 13 and 14 you run past people going in the other direction at miles 21/22. It is pretty tough, knowing you still have so far to go. Most people on the other side of the barrier were running fast and strong, although there were a few people walking. One of the things that surprised me most about the marathon was the number of people walking, especially early on in the race. I didn’t know whether they had planned on walking from the start, had adopted the run/walk method, or whether they were just finding it tough going. It was also frustrating from a running point of view as all the extra walkers were people we had to dodge around! I was elbowed a number of times, and am sure I elbowed a fair few people! Our dodging meant that my garmin would beep with a mile distance about 0.2 miles before the actual marker. I had a mini freak out near mile 14 when my garmin beeped and I shouted to Emily ‘Where the hell is mile 14, omg I can’t even see it!’ only to round the corner and run directly under the sign! 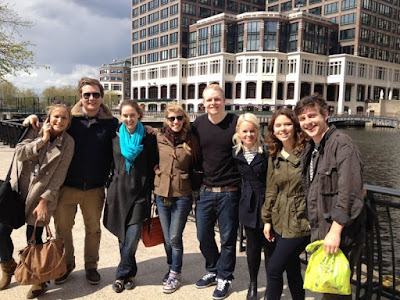 Miles 15-19 were round the Isle of Dogs and Canary Wharf. Emily was struggling a bit with hip pain and my knees were starting to ache a lot. I knew that we were going to see our friends somewhere along this bit so I kept reassuring us both that we could grab painkillers (and another lucozade) from them. We both dosed ourselves up and got on our way again. It was a real morale boost to see them and to still be feeling so strong. 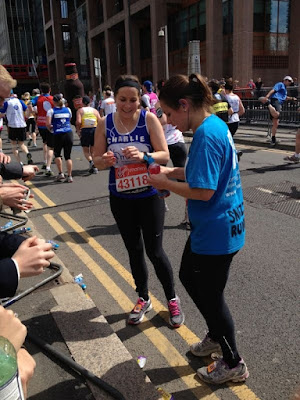 But then about halfway into mile 20, I hit the WALL. Big time. I got a stitch, my knees and back hurt and I just wanted to walk. When I saw my Mum and Dave again I was at a really really low point, and really wished it was over. It was so hard knowing we still had another hour of running left! I am not posing in the photo below, I am holding my stitch, and looking incredibly unhappy! 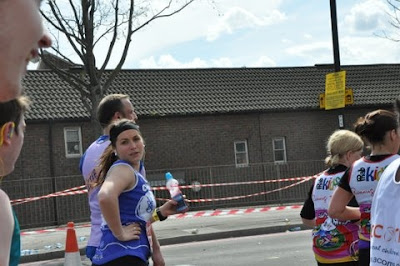 I ran grabbing my side for 2.5 miles, with the distance between Emily and I increasing. Emily slowed down for me to catch her, and she asked whether I was ok. I replied ‘NO’ and told her a couple of times to ‘just leave me’. But Emily told me that I had to keep running, that we had started the race together and would finish together. I ran on with her, running through the stitch. Those miles were the toughest miles I have ever run. I thought my mind and body were going to give up, but Emily kept me going. I got teary again when Lana Del Ray came on my ipod…

‘Feet don’t fail me now. Take me to the finish line’.

Perfect words at a perfect time. And just what I needed. The stitch went around mile 22 and I started to feel strong again, just in time for the Blackfriars tunnel. I knew Monaz, a friend from work, would be on the other side so I was determined to come out running hard. I was so happy to see her and Gareth cheering me on, and managed a few arm pumps at them!! 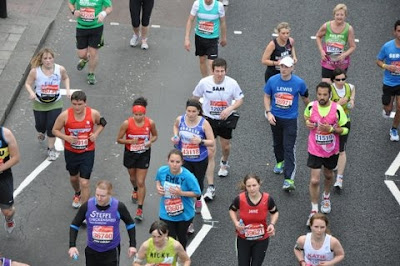 Miles 23-26 are a bit of a blur of crowds and noise. My body felt good and strong again and we continued running forwards, still dodging walkers. I managed to see another friend from work as we came down to the 25 mile marker. As we came towards the Houses of Parliament, I saw Jack cheering and knew we were on the home stretch, and after checking my Garmin, knew we could finish confidently and in under 5 hours, our goal for the day!

We picked up the pace a little as we saw the 800m mark, continuing down to the 400m and 200m. We saw Emily’s family and Joe (who had already finished!) and managed to wave and get a bit of a fist pump going.
With 365 yards to go we got our sprint on, and smiled at the photographers along the way.

About 10 yards before the finish I grabbed Emily’s hand and crossed the finish line together. 4.54.59!!!!After crossing the line, we collected our medals, had our chips removed and grabbed our goody bags. We were very disappointed with our stash, but quickly chomped into our apples and chugged a bottle of water. It started to get pretty chilly so we wrapped ourselves in the foils, feeling very professional and made our way to meet up with our friends and families in the meet up area. 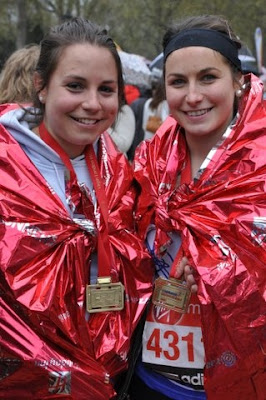 It was so nice to have so much support, everyone was so proud.

I changed into my flip flops and looked at the state of my feet, they were pretty disgusting and had a number of blisters on the toes. My big toes especially were in a bad way, but I will spare you the gory pictures.
It had started to rain about 20 mins after we finished, so our group got the tube back west and decamped to the pub, where I enjoyed a few ice cold ciders! And gloated (A LOT) about our achievement, wearing our medals and finishers t-shirts for the rest of the evening.