Let me just preface this post by saying ‘I run to eat’, and I ran a marathon whilst in New York…

Some of my foodie goals in New York were to eat as many burgers in the NYC top 10 as possible, try a Cronut and go for a really good brunch.

A cross between a croissant and a donut- what’s not to like?
There’s only one place in NYC that’s allowed to call it a Cronut- they’ve trademarked their creation, and that’s Dominique Ansel Bakery in Soho. We joined the queue (yes, queue) at 7am- the guy at the front had come straight from work at 4.40am. The cronuts change every month, and since we were there on the first of the month the queue went around the corner, with Halloween party goers waiting in their costumes. 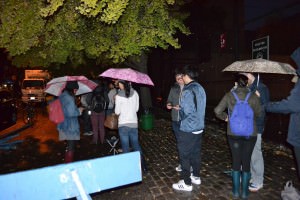 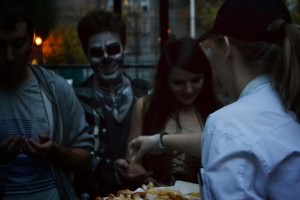 The lovely people working at the bakery bring out little madeleines to those of us waiting in the queue. 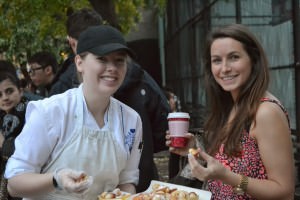 We finally made it into the bakery around 8.30am after being passed the ‘bread baton’ allowing us in. And went completely overboard with our ordering- getting 4 cronuts (you’re only allowed 2 per person) plus 2 DKA’s- a caramelized croissant that Amanda recommended. 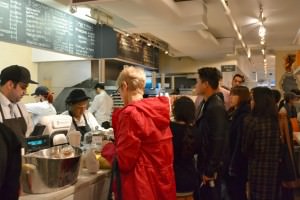 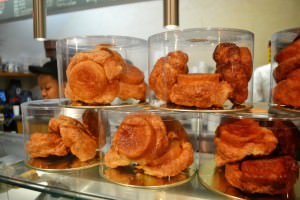 This month’s Cronut flavour is Dulche du Leche, and wow was it indulgent. The flakey, buttery pastry
were filled with a gooey dulche du leche sauced that oozed out from between the layers. The outside edge was deep fried, crispy and sugar coated. Holy YUM. 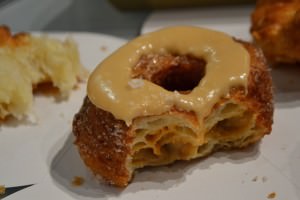 However, my favourite breakfast item, baring in mind it was 8.30am, was the DKA. It was luxurious without being sickly. I shared a cronut with my Mum and ate one of the DKAs, bringing the other Cronuts back to have for afternoon tea with Tom and his parents!

Mini cupcakes, 50 calories a pop with all the flavour combos you could want, and no guilt. There was a shop next to our hotel, so we stopped by for a few. My favourites were the pb and chocolate and red velvet. After the marathon, I saw a lady with a tray of 25 of them in her marathon gear, when someone looked at them she replied ‘I just ran a marathon, yes I’m going to eat them all’. Love her. 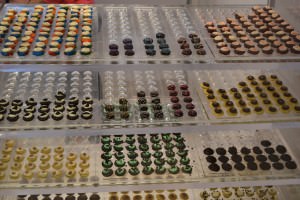 I loved Sarabeths so much that I went twice in 5 days- once to the Chelsea Market bakery and then out for brunch with my friend Kate that lives in NYC. Worth a visit or two for breakfast, lunch, coffee, dinner…. 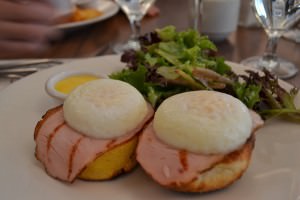 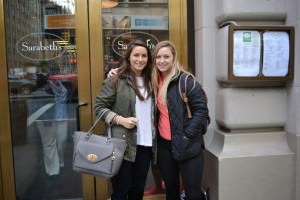 Another awesome breakfast/brunch, I indulged in a HUGE plate of brioche french toast with fruit, bacon and maple syrup the morning after the marathon. This place was full of tourists and locals, and offered all the American breakfast options you could want, plus it’s centrally located right opposite Grand Central Station (and conveniently, our hotel!) 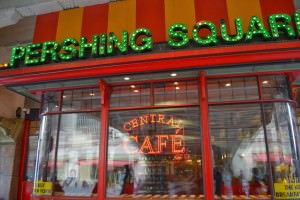 Ashley recommended this little gem as a post-marathon treat. We started with cocktails (obviously had to pose with my medal, I earnt this glass of champers!). Each table were sent some hors d’oeuvres, before we indulged in our three course menu. The seasonal plates were all fairly small, which meant that we didn’t fill up on our first course. However, I’m not sure if it was the medal, or our accents, but we were given an extra course, plus another pudding to share between us- so spoilt! 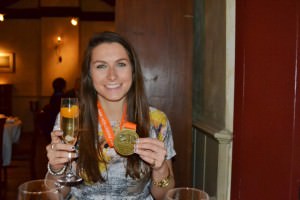 And now to the BURGERS!
I dragged Tom to the first Shake Shack in NYC- which neither of us realised was outside. We sucked it up, wrapped our coats a little tighter, avoided local wildlife and bird droppings and enjoyed the amazing crinkle chips, tasty juicy burgers but couldn’t bring ourselves to eat a frozen custard in the frigid temperatures! 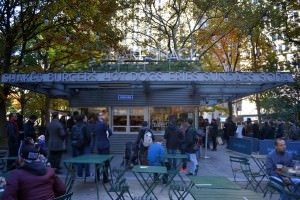 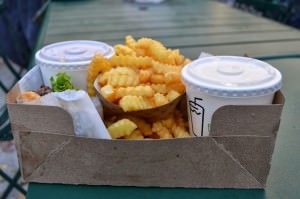 We stumbled into this restaurant near the 9/11 memorial without realising that it was in the top 10! It was the day before the marathon, so I opted for the turkey burger and it was disappointing, but the sweet potato fries were so, so good!
After walking past the Times Square Five Guys, I couldn’t believe it when I saw that it was in NYCs top 10 Burger places. After seeing the calorie counts next to the choices when ordering, I went for a ‘little burger’ (a single patty) whilst Tom tried to ‘break 2000’ and went for a Bacon Double Cheeseburger! I have to say, I’m not sure if it was because I was hungry, but the burger was delicious, well seasoned, meaty, tender and with as many free toppings as you like, you can pimp your burger. Disappointing fries though. Oh and with over 100 drinks choices, and free refills, you don’t need a large cup…Tom was the only person in there with a large one! 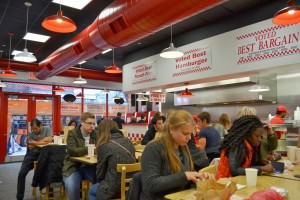 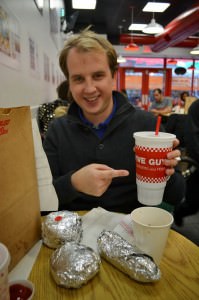 What’s your favourite restaurant? It can be local or abroad…