This is not a political blog, not will it become one, mostly because I actually don’t think I am intelligent enough to understand all the inner workings of politics and economics, but I did want to share my feelings on today’s news that the UK is leaving the EU.

I am heartbroken, scared and angry. It hadn’t even crossed my mind that this could happen, not really. In London and online I’m surrounded by fellow ‘IN’ supporters, I genuinely didn’t know that there were so many people that wanted out.

The vote has divided the nation, and it seems that the ones that will be most effected by the decision are the younger generation, my generation. We are the ones who’ll be around to live with this decision, and actually it’s not one we wanted. According to polls it was the younger generations that mostly voted in favour of staying within the EU whilst the 65+ disproportionately voted out of the EU.

Anyway, you probably didn’t come to this blog to read about my views on Brexit. 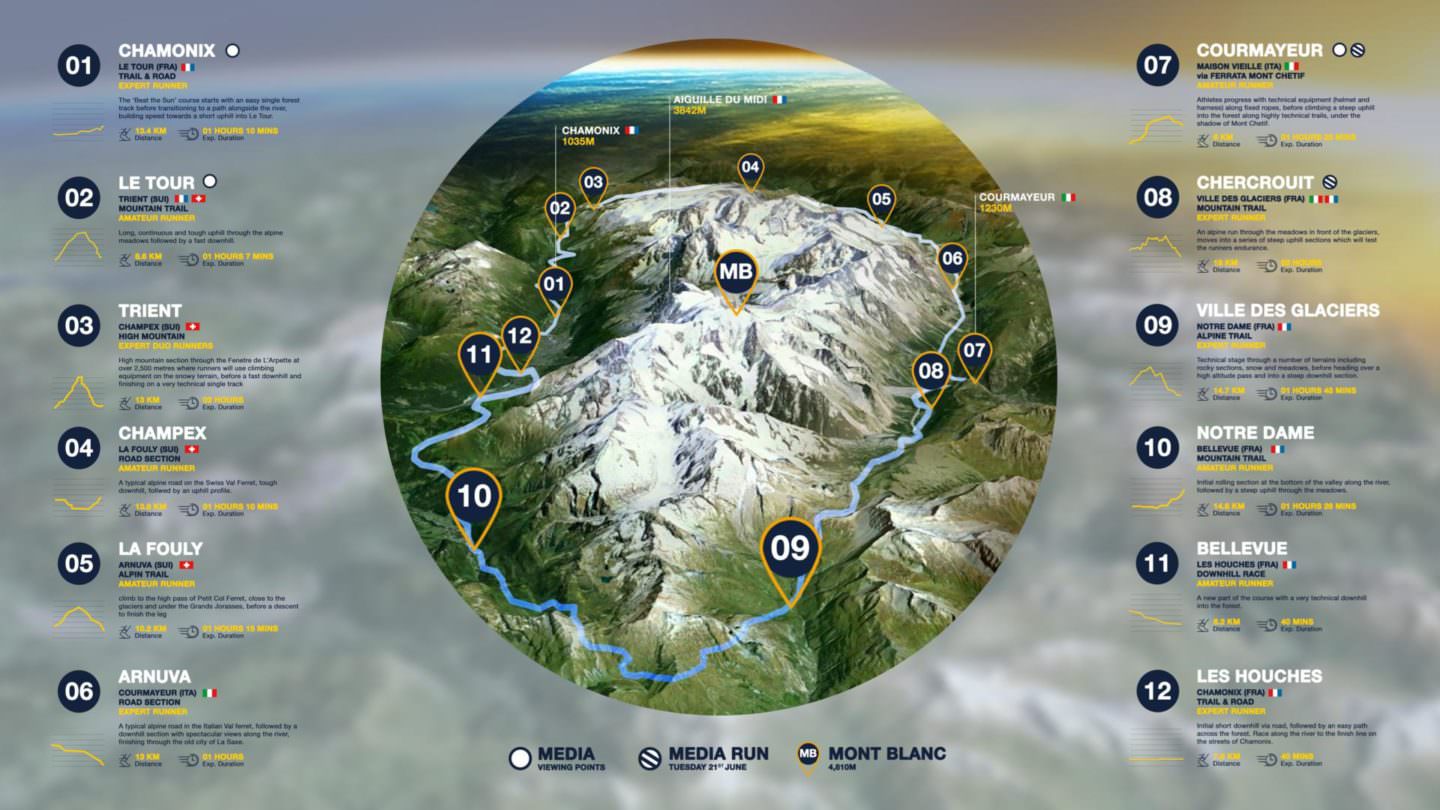 It feels fitting to share my recap of Asics Beat the Sun race that I was lucky enough to watch in Chamonix earlier this week. It was all about teams mixed with amateurs and elites from across the world, came together to compete against nature. Their aim – to run the 140.1Km around Mont Blanc between sunrise and sunset.

You can read my other posts about the trip;

All Four Seasons in One Day on the Trails

I wasn’t running although Tom thought I was – clearly he doesn’t listen to me when I talk about running. I definitely would have done a LOT more training and talked about this race non-stop for months if I was part of one of the teams. Luckily for them, I was cheering from the sidelines.

There were eights teams; 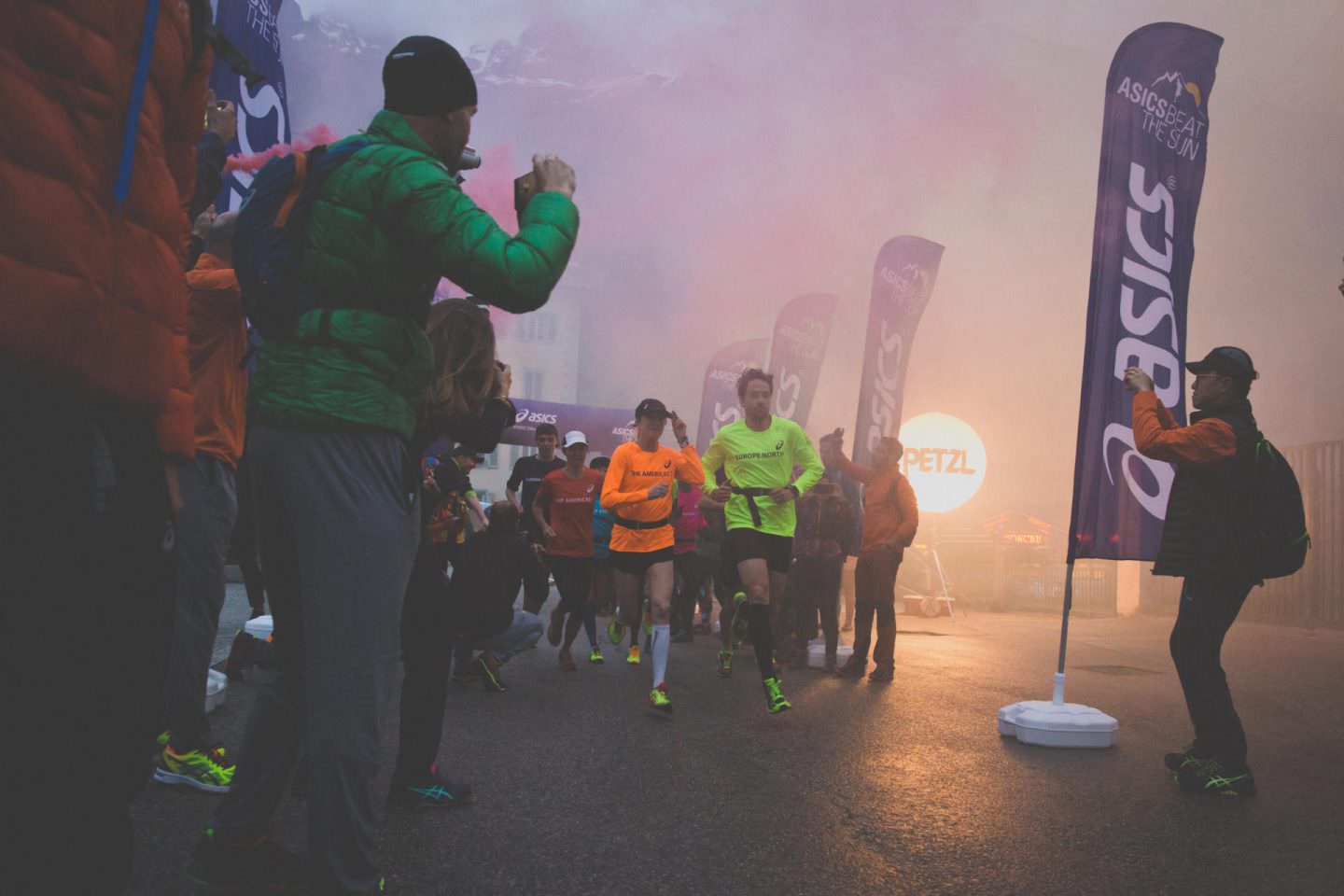 The first wave of elites left Chamonix centre at 5.44am, taking on their first 13.8KM leg. From there we jumped on a bus to head to the handover area and cheer them in – Europe South in first, Africa second and Europe North in third – and enjoyed a very French breakfast of strong coffee and croissants!

From there the teams kept running, and we headed back to the hotel, where I tried to nap (5am alarm after a bad night’s sleep) before getting back into a bus to take us in Italy and up the Skyway Mont Blanc, a viewing platform in Courmayeur. Unfortunately the low cloud cover and rain meant the views were non-existent, and instead we joked about rooftop yoga and the mountain panoramas we were missing out on. 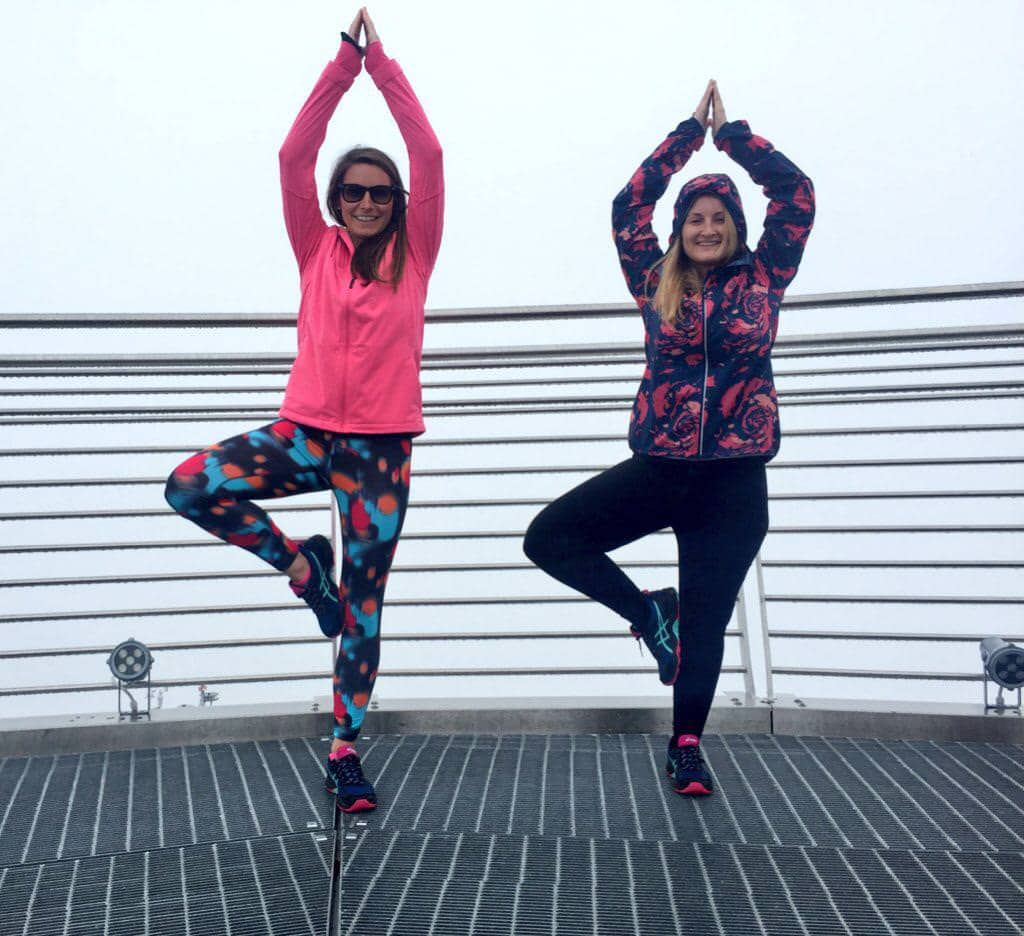 The leg 6 and 7 handover was happening in the Italian town, so we went to cheer the runners on – it just so happened to be the original elites that we’d seen that morning handing over to their amateur runners, just 7+ hours later. By this point Team Europe North were in the lead, and GB’s Matty Hynes was handing the baton to GB amateur James McDonald with a 4 minute lead. There were big gaps in the field by this point, and it was becoming clear that the teams that would do well were the ones with mountain/snow experience!

The poor weather conditions meant they had to change the course somewhat, skipping the harnessed rope climb in exchange for something slightly less treacherous, but still brutally steep. 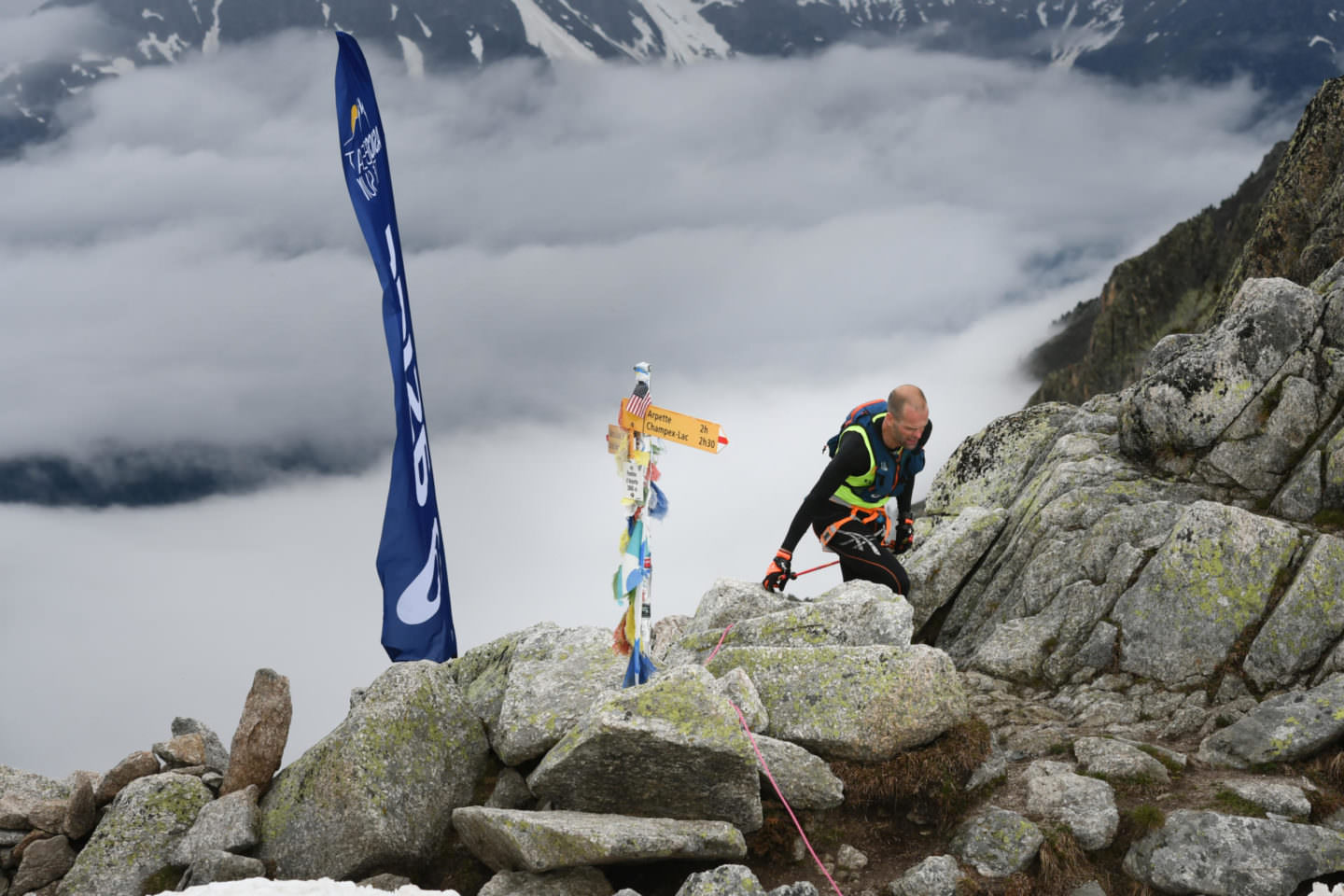 The group of well-fed journalists were then allowed to run part of leg 8, the longest but one of the less technical legs. We really felt for the athletes as we battled the elements for our 5KM run and were all glad to return to the bus and our snack bars!

During our run we spotted the Europe North team (who had been chased down by Europe South during leg 7 and were now in second place), Europe Central, Americas 1 and 2 (very excited to see Ryan Hall run past me!) and Africa, all in fairly quick succession. The race was on. 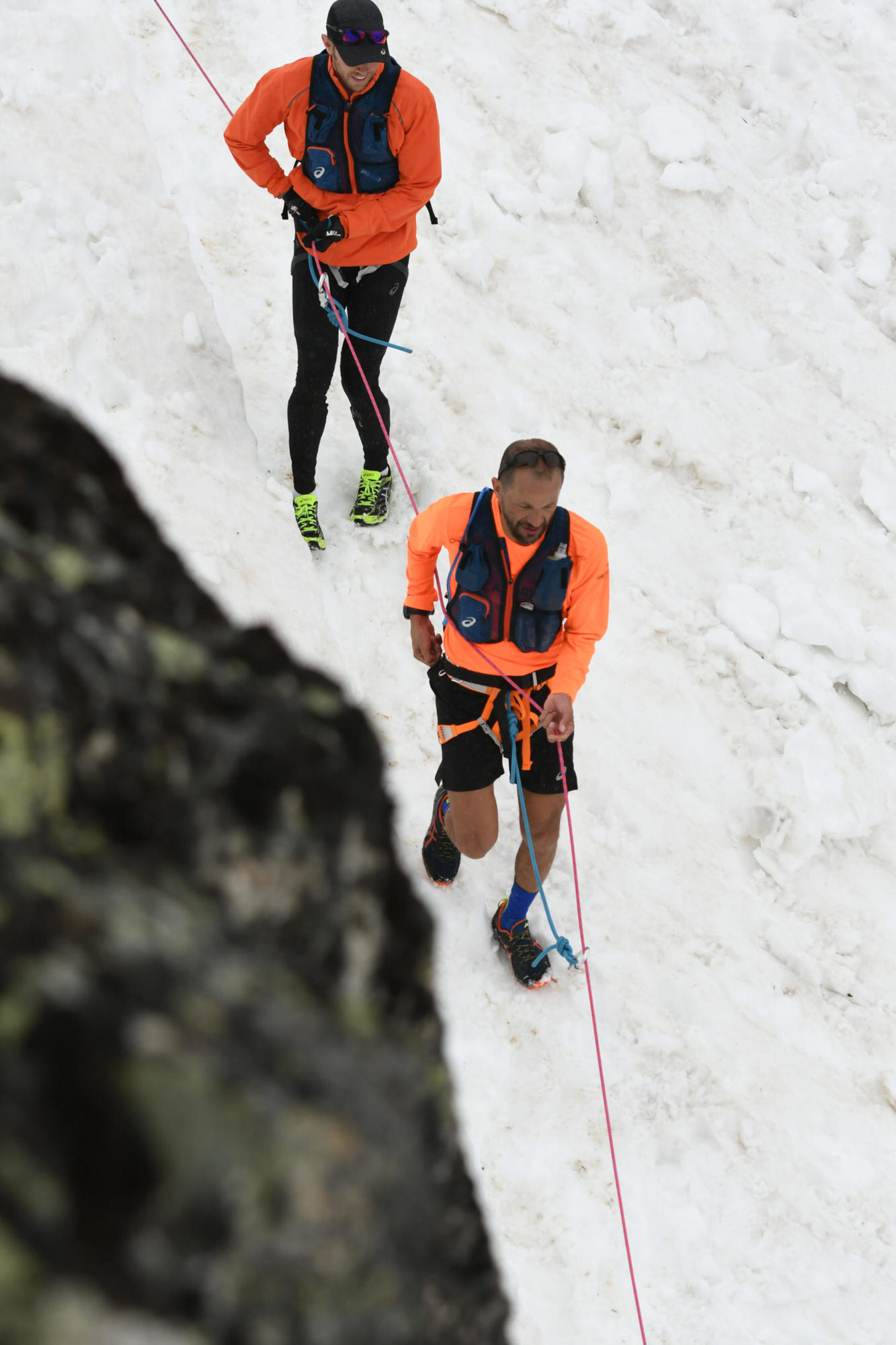 It dawned on me just how exhausting the whole event was for the athletes, who were in a constant state of prepare, race, recover for the entire day, when I promptly fell asleep during our 30min bus ride back to Chamonix!

Back at the hotel, we cleaned up and made our way back to the start area. Talk had got competitive between the UK and Spanish group over just who was going to win and take the title – and whether the teams would actually ‘Beat the Sun’.

The centre of Chamonix had been totally transformed into an impressive lined finish area, complete with confetti canons. After a recovery beer for the journalists, we took to the street to cheer in the winning team…. 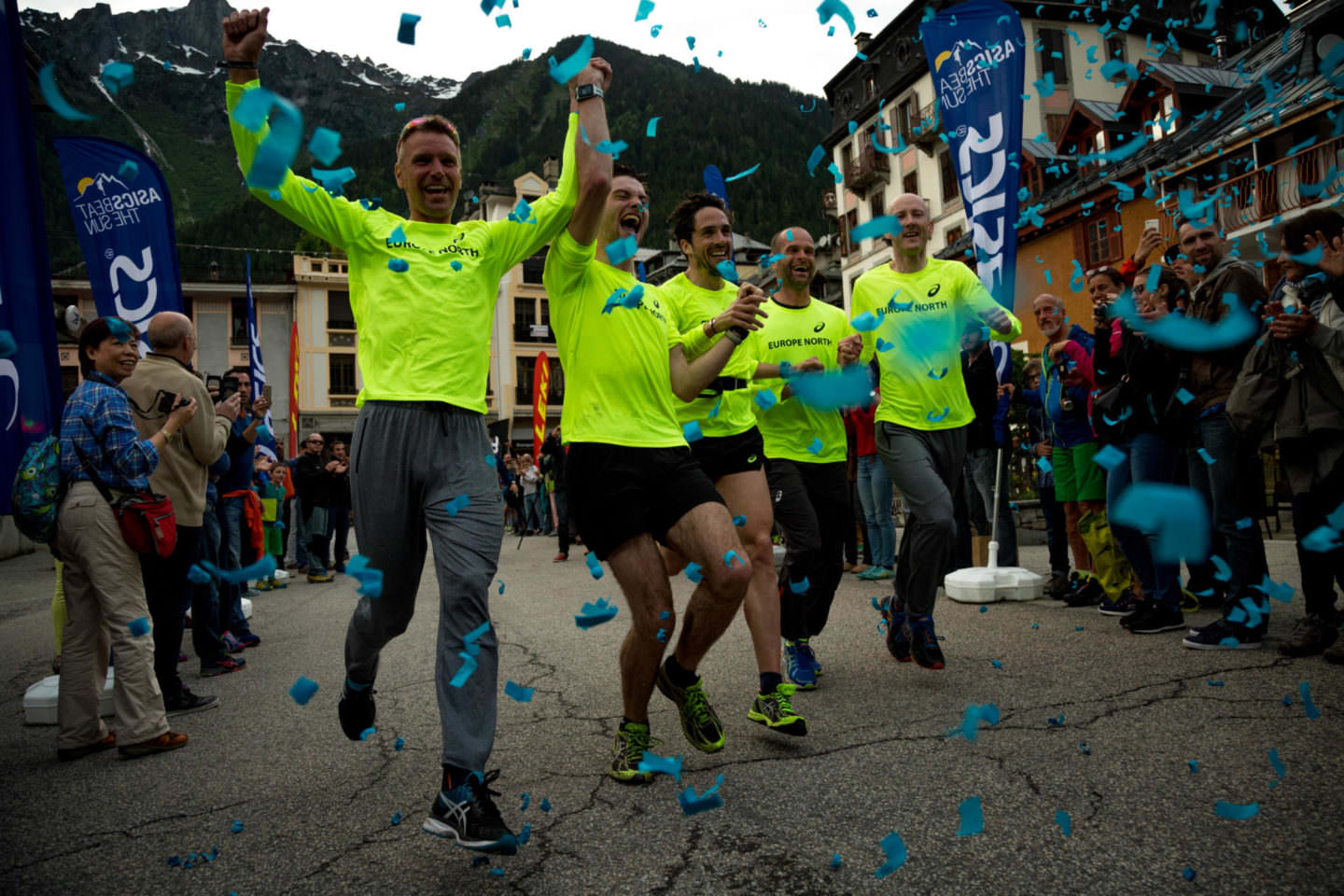 They crossed the line with a whopping 51 minutes to spare, and nearly 40 minutes ahead of the next team.

We’d had the chance to have dinner with the British athletes, as well as interviewing the whole team the previous morning, and although we hadn’t known them for long, I felt really emotional watching them win.  They were so proud, so pleased at having overcome the obstacles (the teams climbed higher than the height over Everest over the 140.1KM), and not only beaten the sun, but held off the competition from the other teams to come first.

I had such a wonderful time, getting to know the group of journalists from around the world, including the lovely Amanda from the US who I have friends in common with (it’s a really small world!), getting to fan girl over Deena Kastor and Ryan Hall, and becoming a fan girl of Matty Hynes. I don’t think I’ve met a competitive athlete like him – so friendly, open and above all, chilled out. Watch out for him, I really hope there’s big things to come for the Middlesborough man. 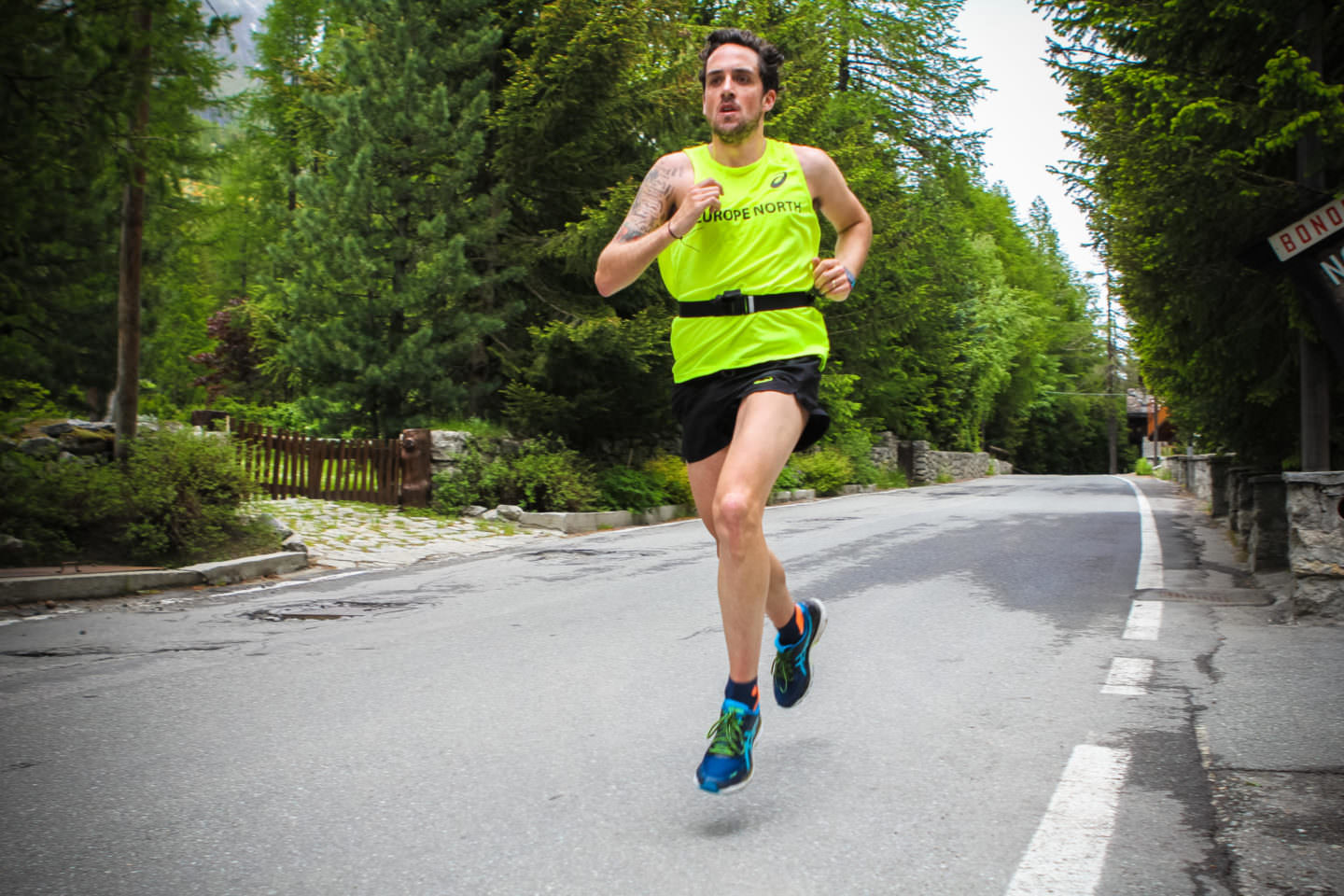 So, who’s going to be signing up for next year’s race? You can learn more about being one of the amateurs for Beat the Sun here.

I want to take this opportunity to say a huge thank you to the team at Asics for hosting an incredible few days, and to the guys at Pitch London for looking after me so well! Great photography skills Matt!