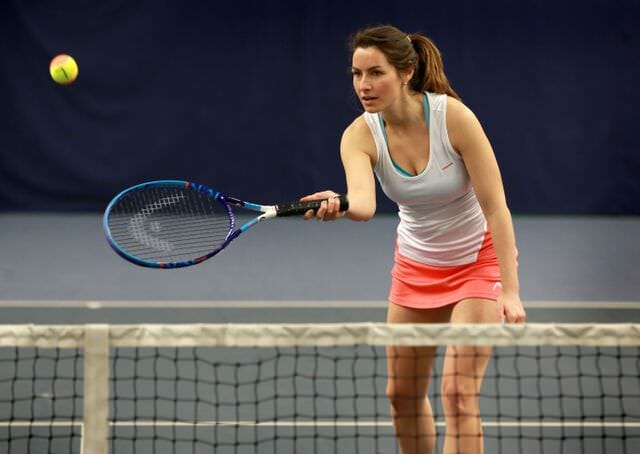 Tennis is one of the most sociable of sports. Once the sun comes out, it seems that the courts around London fill up with friends, couples and colleagues hitting the ball around. Embarrassingly, I’ve had lessons since I was 12, but I am pretty rubbish at the game. I went to a school where tennis was the main sport, and other pupils went on to play at Wimbledon, whilst the best I’ve done is sipped Pimms in the stands.

But I so want to be able to show off my skills on court on my next holiday. It’s a sport that I long to be good at, rather than relegated to the service box when we play doubles. 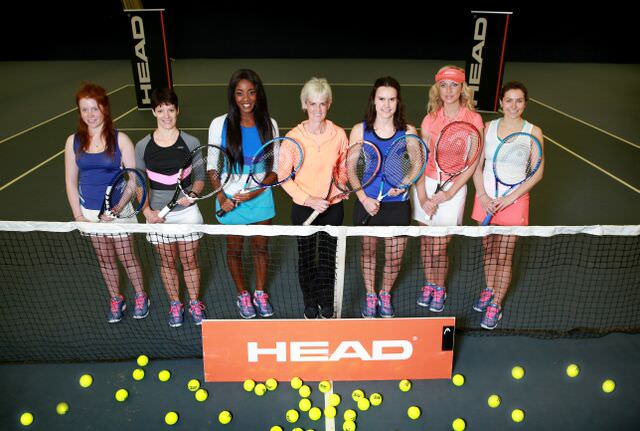 When I was invited to a training session with Judy Murray and Head, I hesitated for a minute- did they think I was a good player? Would I be the worst of the group?  Probably yes, but even still I couldn’t pass up on the opportunity to meet Judy Murray (my Mum’s doppelgänger!)

The weather couldn’t have been better for a morning on the courts in sunny Marlow- sadly however, we were playing inside at the Bisham Abbey National Sports Centre.  The state of the art facilities house tennis, hockey, football, squash, canoeing and netball stars of the future, with training academies and onsite accommodation for the elite youth. I felt a little out of my depth, getting changed into my tennis gear. What do they say about all the gear and no idea?! 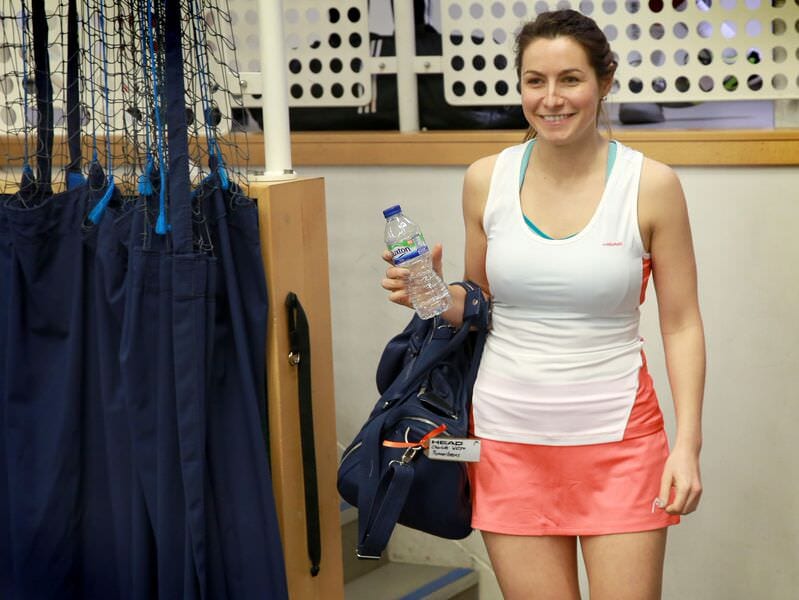 Our session began with a warm up, some throwing and catching drills, plus the basics of racket handling. We were using pressure-less balls, which I hadn’t used before, and are great for beginners. They move more slowly than a normal tennis ball which gives you more time to move and react to the ball. 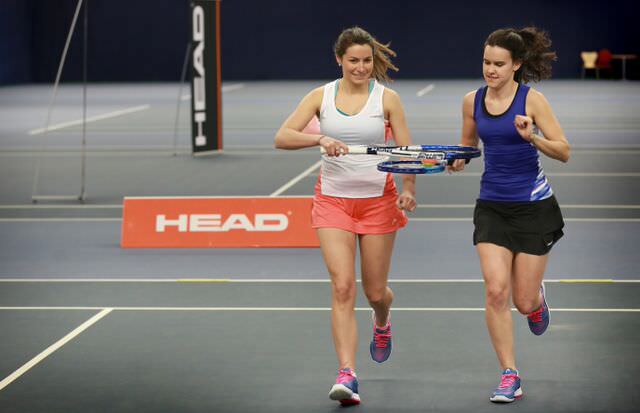 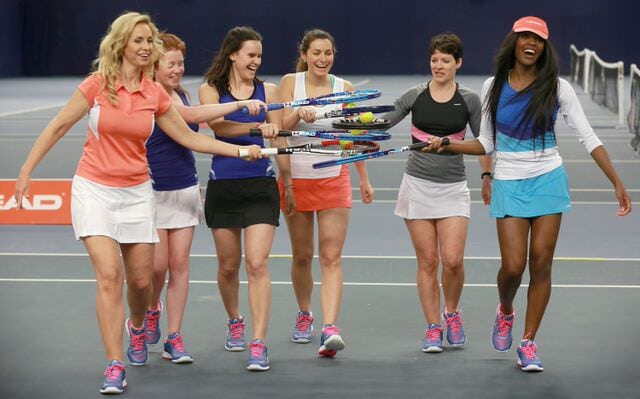 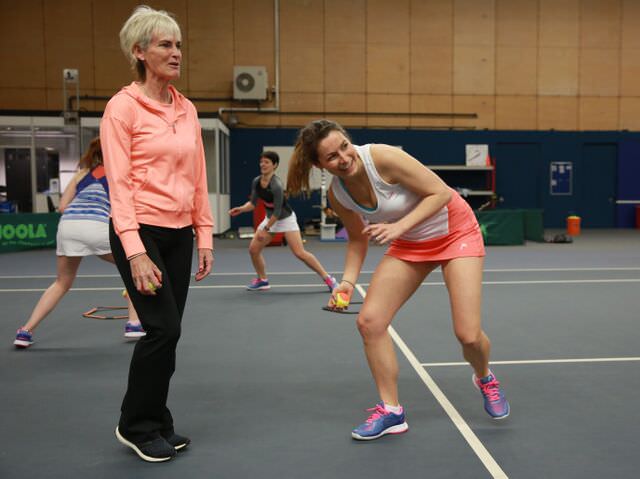 We were taken through our paces, building up to small rallies in pairs using just very small areas of the court. Judy recommended starting off with mini tennis as an abbreviated version, this allows you to develop the skills you need for tennis in a smaller area. Although AJ and I weren’t particularly good- we did win the first to 15 competition!

I found I was actually better on the bigger court, where it became more about power than accuracy- plus I had a partner that was much better than me which helped. I really enjoyed our rally, it was so much fun moving from the front of the court all the way back to the base line. We were even given a chance to practise our serves for a while- mine is quite consistent but fairly weak. All things to work on this summer! 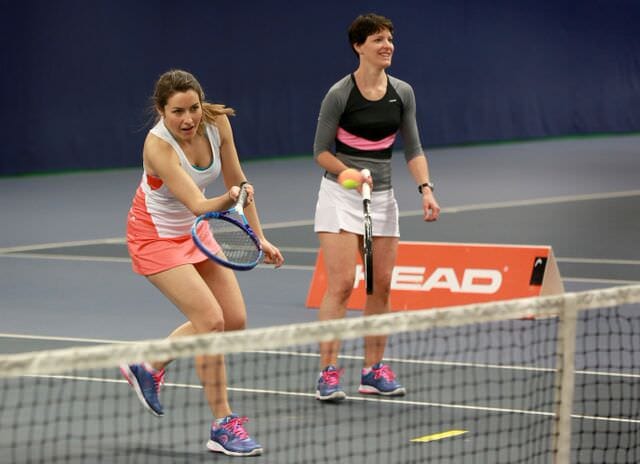 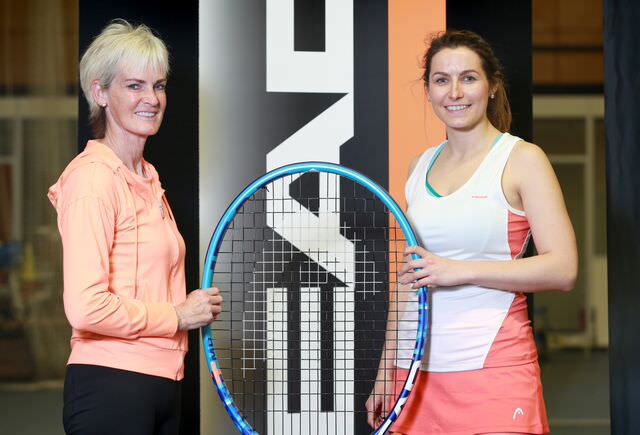 I was given a few minutes to chat with Judy one on one, about the best way to get into tennis, players nutrition and skills you can practise at home. Judy recommended finding a club or group to start playing tennis with if you haven’t played before or if you’re a bit ropey. Tennis Tuesdays are hosted by Nike and the LTA across the UK and offer sessions for as little as £7- I’ve signed up to go to my local session next week!

If you can’t play tennis very often, there are things you can do to better prepare yourself for your next session- whether that’s hitting the ball against the wall in your garden, practicing shadow shots with movement (left, right, front and back), or strengthening your arms especially your triceps at the gym. I found it really interesting to learn that a lot of tennis players are now switching to gluten free diets as their bodies aren’t processing gluten too well. Getting nutrition right for a game is crucial- the professionals can often be on the court for up to 5 hours, so having food and drinks in their bags that help them refuel quickly is key. Often players have 3 or 4 different coloured drinks with them, these play different roles in both hydration and nutrition for athletes.

HEAD ambassador, Judy Murray was speaking at a HEAD UK master-class supported by Living Tennis – for more information go to www.head.com/tennis or www.livingtennis.co.uk.