I love being by the water, whether it’s a lake, river, reservoir or the sea. There’s something so peaceful and relaxing about it. Our room in Sri Lanka looked out over the beach, with the crashing waves providing a musical backdrop. I wish I could look out onto this sort of view every morning. 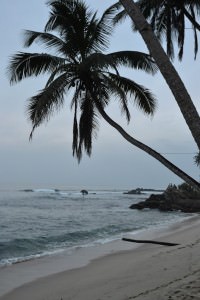 When I heard that our hotel had a teacher that offered yoga classes, I was all for it, especially with my 21 day yoga challenge coming up (it’s not too late to sign up and join me). Although we couldn’t have our class on the actual beach, hearing the sounds of the sea had a really calming effect. 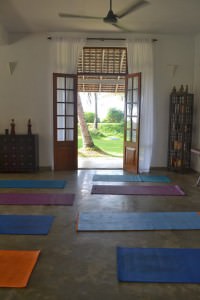 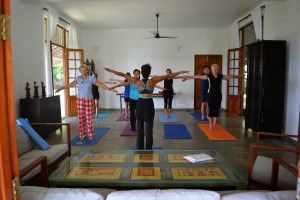 A small group of us enjoyed an hour class that involved a lot of twisting, hip openers and the traditional sun salutations. Our teacher had us practise a type of breathing called Nadi Shohan Pranayama- where you alternate breathing out of each nostril, this apparently helps clear out blocked energy channels in the body, in turn clearing out the mind. I really struggle with this side of yoga- the concentrated breathing and meditating, and am hoping to become more open and patient with it as I start my challenge in January. 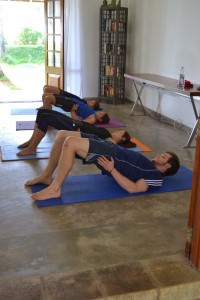 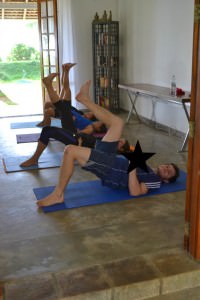 As you can see from the photo above, my cousin Rob and I were the least flexi in our row, although in our defence the other girls in the row do a lot of ballet! (You can also see that I’ve had to cover up Rob’s gesture towards Tom at taking photos of him during the class!) Both of us agreed that our hips/legs are incredibly tight and that it had been a while since we’d done anything stretchy, focusing mainly on circuit training, weights and cardio in our workout routines. Rob has got into boxing recently and is loving it! 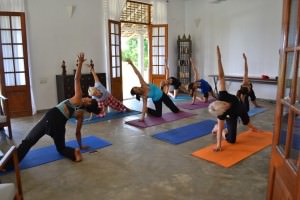 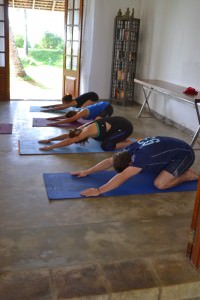 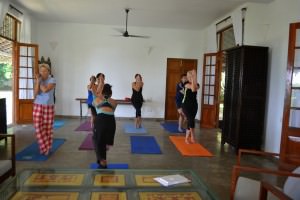 Our lovely class really had me thinking about how enjoyable a yoga retreat might be. I know that I sometimes find yoga frustrating, but taking the time to sit and breathe, to stretch our my limbs without the distractions of daily life was so mellowing and peaceful. If only I could make this morning, beachside yoga class a weekly fixture in London!

Rob definitely got his own back for the photos that evening by beating us at Tennis. Our hotel had a tennis court, and some slightly dodgy tennis rackets but we gave it our best shot. For some that was better than others. 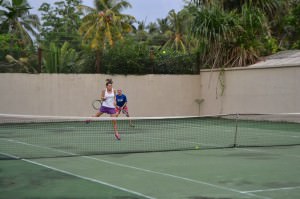 It was great fun although very hot and sweaty. The previous evening, three of us had hit some balls around without playing a game. We decided that games are definitely the way forward, as without so many rallies, we were able to stay slightly cooler. I have an even greater respect for the tennis pros that have to play in searing heat for hours on end- we were all exhausted after our efforts.

Have you signed up to join me for 21 days of yoga in January??