This was the pact that Leah and I made about the Nike Womens We Own The Night 10K. I’ve been training hard over the last couple of months, attending the Monday night run clubs, and bootcamps in Hyde Park on a Wednesday, so I knew that it was possible if I set my mind to it and things went well on race night. 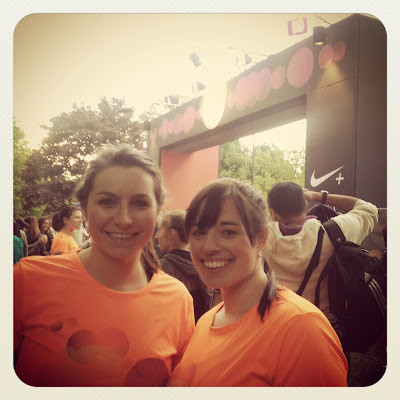 On my way to Victoria Park, in East London, Leah text me to say that spectators weren’t allowed in to the race village, so they had congregated outside the entrance to give out her ‘Team Naturally Run’ goodie bags, and meet up with the rest of our runners. I can understand why Nike didn’t want the village to be overcrowded, but not letting anyone in meant that a lot of the runners stayed outside the village until just before the start, and meant that the food stands inside didn’t get a lot of the business that they would have done from hungry HABs (husbands and boyfriends) and friends- not many runners want to eat cupcakes or hamburgers just before a race!

Rather than race numbers, we were all given bright orange t-shirts and race chips. Although this saves on the faff of race bibs and safety pins, it does mean no official photos 🙁

On entering the race village, we picked up our light up wrist bands, with colours denoting our goals for the race; 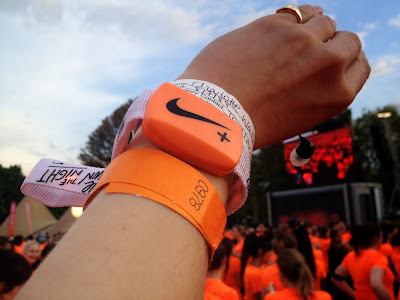 I picked up an orange band (and another orange band for my bag drop) as I was hoping to beat my She Runs Windsor PB of 56.54.

The race village was great, with plenty of loos, a quick bag drop, a Nike tent showcasing their latest gear and an Elle magazine tent giving out post-race necessities such as deodorant, dry shampoo and tissues. Sadly by the time we got into the race village there was a large queue to get into the Elle tent so I gave this a miss in favour of a loo trip!

After a brief interview on stage with Paula Radcliffe, a few of the Nike master trainers led us in a warm up. The warm up was far more comprehensive than many other pre-race warm ups than I’ve done in the past. 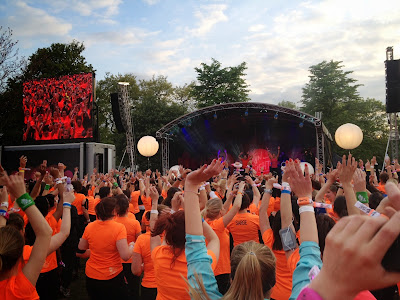 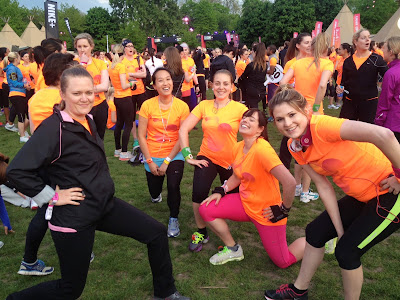 Warming up with some of the other Team Naturally Run girls. At this point I started to get the nerves, imagining injuries and niggles. I also knew that I hadn’t fueled properly throughout the day; I’d tried to drink plenty of water and Nuun hydration tabs, but I find it difficult to know what to eat before an evening race. I’d had soup and bread for lunch, and chocolate covered rice cakes and a banana a couple of hours before the race. I felt hungry at the start and not fully hydrated, and knew that my body would be running on close to empty before the end of the 10K. Fueling correctly is something I really need to work on in the future, particularly for evening races. 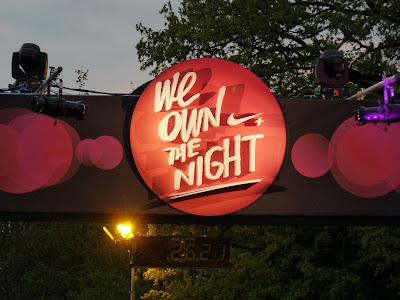 We were called to the race start according to our wrist band colours, it was at this point that we discovered that the majority of runners had opted for an orange band- and with a PB meaning a different time for everyone, we found ourselves stuck in a very crowded start behind the 65min pacers. So much for trying to start in front of the 55min pacer! 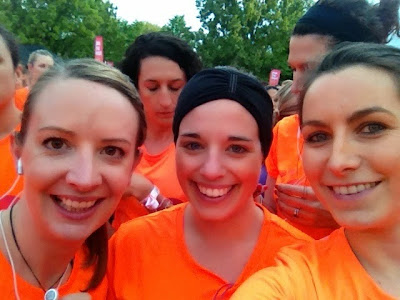 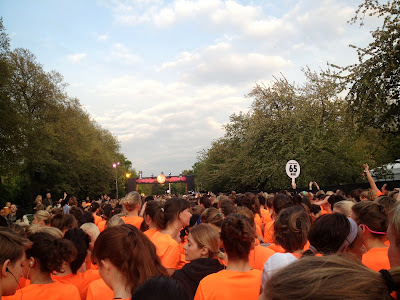 I knew that getting past all of these people, and finding space to run was going to be tough. We set off, slowly, trying to break through any gaps, and running on the side of the course along the grass when it was possible.

The course was two laps of Victoria Park, with the path split into two lanes. This made the course very narrow and meant there was a lot of jostling, particularly for the first 5K. The speedy runners came past us on the course at one point, and it was awesome seeing some of our faster friends fly by. 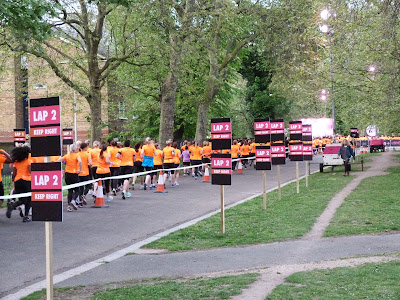 The course was flat, a definite positive after She Runs Windsor, although it included some sharp bends, and a few turnaround points which didn’t ease the overcrowding, and caused a few pile ups. There were water stations located in two spots along the course, and unfortunately it was during the first one, with a lot of pushing and shoving, that I lost Leah and sadly didn’t find each other again until after the race.

Running a race alone comes with more mind challenges than running with others. I knew my body was feeling tired, and my Runkeeper app didn’t do a great job of reassuring me of my pace. I need to find my Garmin, I feel lost running without it! Tom came to watch this race, his first in the role of spectator. I was so excited to spot him just before the 1K mark, then again just by the 6K mark- luckily the runners had thinned out a bit by this point! It was great seeing him on the course, and pushed me to keep running, despite feeling exhausted and out of energy. I didn’t know exactly where he would be and wanted him to see me running strong, so I powered through. 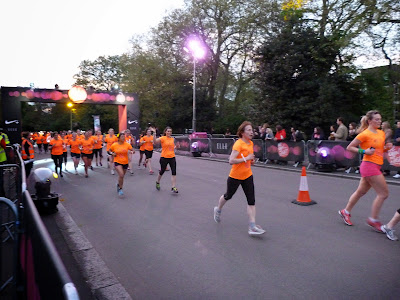 The support along the course was great, especially the Run Dem Crew cheerers about 3k/8k mark, and the course marshals. I loved the signs that Nike had positioned along the route, ‘Run like Ryan Gosling is waiting for you at the finish line’! 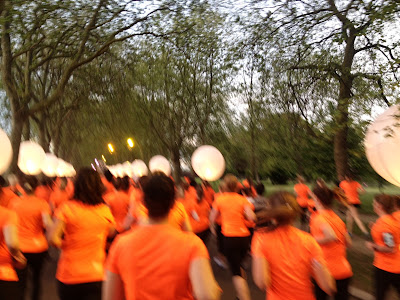 I knew from my previous 10K last week, that the worst part of the race is 7K-9K, it’s important to keep a strong pace but the finish line isn’t quite in sight. My body felt so weak, my stomach was growling and I didn’t think I had a sprint left in me. Around the 500m mark, people around me started kicking it up a notch. Around the 200m mark even more people started sprinting, I wasn’t sure if I could push it for 200m, but then remembered my run from Monday, ‘Run hard or go home’. So I sprinted (it felt like a sprint but who knows how fast I was actually running by that point), across the finish line. I felt worse than I have in a long time after a race. But cheered up instantly when I saw that Tom had somehow managed to sneak into the race village and was waiting for me just over the line!

As I ran under the clock, I saw that it said 54 something and I knew I’d got a PB, but not by how much. I waited to cheer Leah in, and congratulate her on a new PB!! 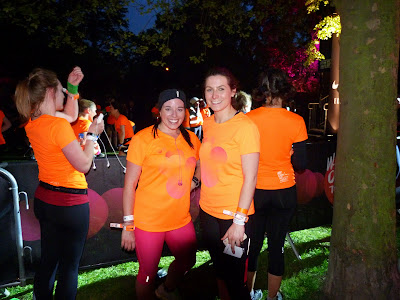 Sadly there wasn’t anyone handing out water directly by the finish line, and instead of medals, Nike gave out pretty bracelets. I understand that bracelets are cute, girly and can be worn more often than a medal, but I think considering there were bracelets in our goody bag, and finishers medal wouldn’t have gone amiss! Despite the lack of water, I did manage to find a glass of Prosecco quite quickly before joining the bag collection lines, (I was lucky to be in the orange line but it still took about half an hour to get bags back).

Once the rest of the team finished up the race, we congregated outside of a group picture. The best thing about running We Own the Night has been training with these girls. Everyone is so supportive of each other, regardless of speed and time. Before the race Beki told me that she was aiming for a 1.10. something to give her a better time than She Runs Windsor, I told her that after such a hilly 10K there, she could definitely run a sub 1.10 on a flat course and that she should ‘just go for it’. At the end of the race she came running up to me and gave me a huge hug, thrilled with her 1.08 finish!! So proud of her! Laura also achieved a huge PB, breaking the 50min barrier! 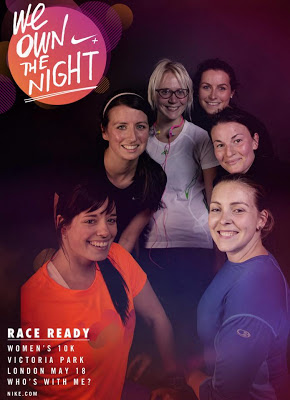 As we were finishing up our photos, the final runner on the course was just hitting the 200m mark, it was awesome to see everyone clapping and cheering for her to finish. Whilst I don’t feel like all the ‘girl power’ stuff is necessary, even at women’s only races, I love how much support there was for each and every runner. This event certainly pushed people out of their comfort zone to achieve their personal bests, and that is the sign of a successful race!

I was thrilled with my official time when it came through… 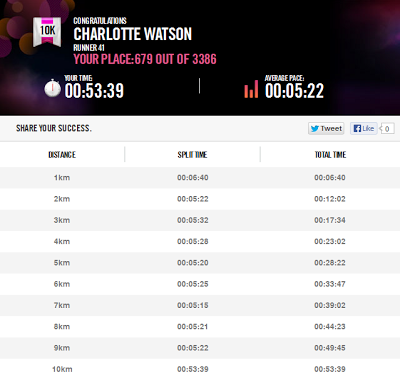 Thanks Nike for a great evening, and especially for all the awesome events in the lead up to the We Own the Night race (like running with Ellie Goulding!) . I’ll know for next time to start nearer the front, and to check beforehand if spectators are allowed into the village!