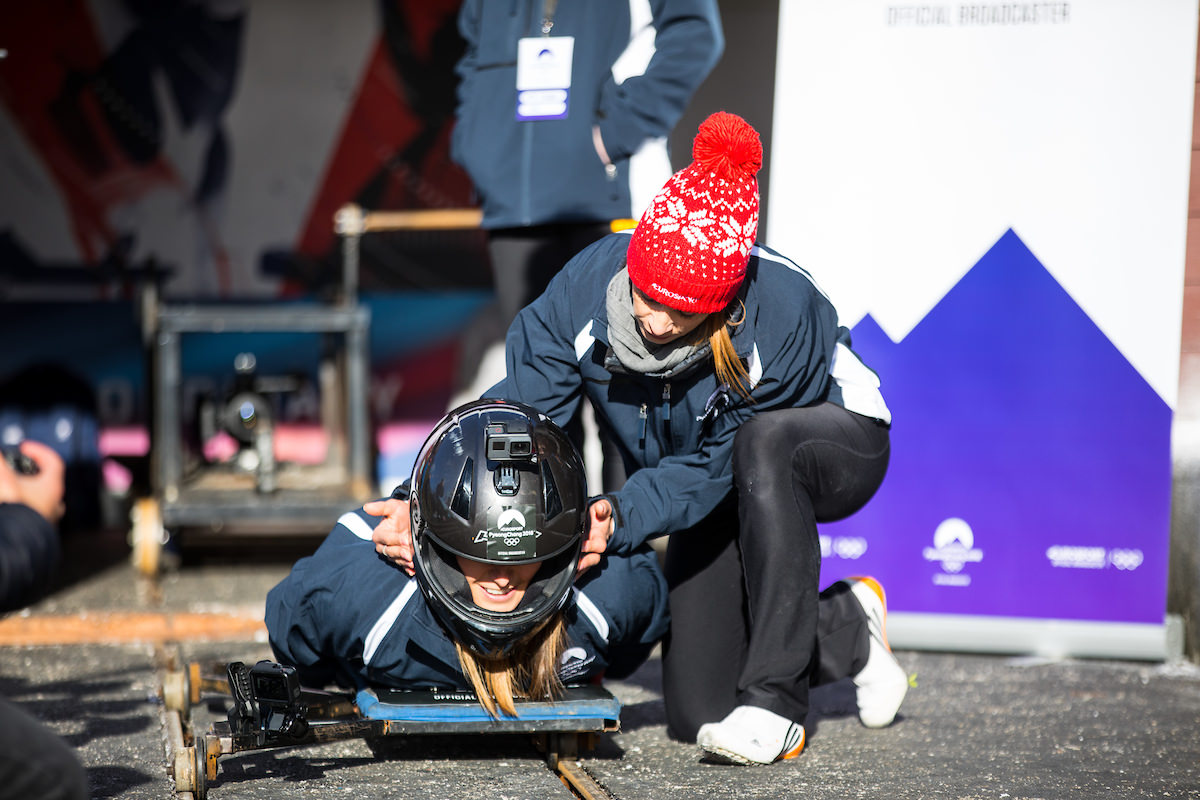 Have you been watching the Winter Olympics? I haven’t seen much of it due to work and travel but from what I have seen, it has been epic.

Yesterday morning I caught a few runs from the Men’s Skeleton finals on Eurosport and was hooked (so much so that I missed my train, eek).

You might have seen on my Instagram stories that a couple of weeks ago I was given the chance of testing out the skeleton at the training centre in Bath, with Olympian and Silver Medallist, Shelley Rudman thanks to Eurosport. Obviously, we weren’t on the ice, instead, we were at the outdoor practice run where GB athletes perfect their starts.

OK, I’m usually a little nervous about anything new, but hurtling head first downhill on a tray is legitimately nerve-wracking.

After a very quick intro by Shelley, Jake took his go (Lilly and I pushed him forwards to go first!). The first turn would be with Shelley pushing us, whilst the second and third attempts were with us running alongside the ‘tray’ and as Jake put it, ‘worming’ onto the tray before the track started sloping downhill. 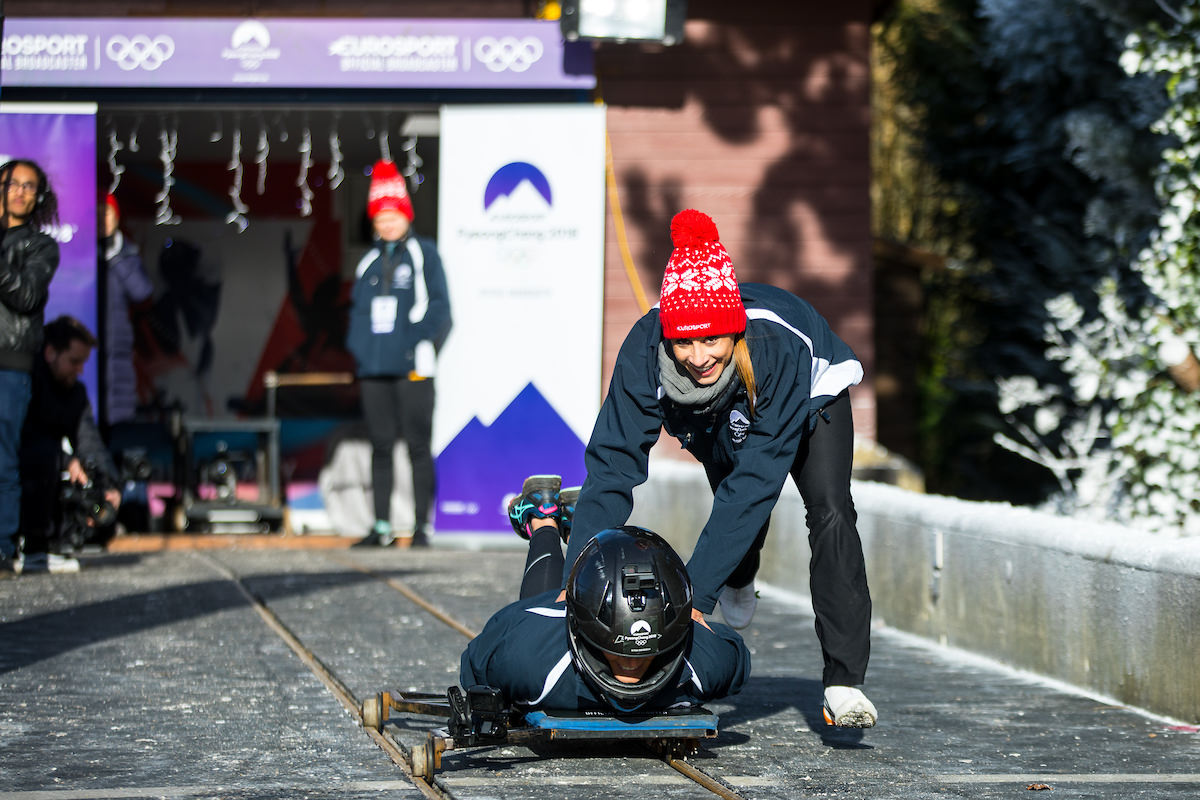 You have to lie straight, legs bent (the professionals keep their legs lower for aerodynamic purposes), shoulders rounded over but head up. It was rather uncomfortable and I had a bad headache the next day from staying in the awkward position.

The one problem? I couldn’t hear or see much out of the enormous helmet. My perisperhal vision was next to nothing, and I could pretty much only see my feet. I didn’t hear Shelley shout for me to get on, so I made a very late ‘worm’ onto the tray during my second go! 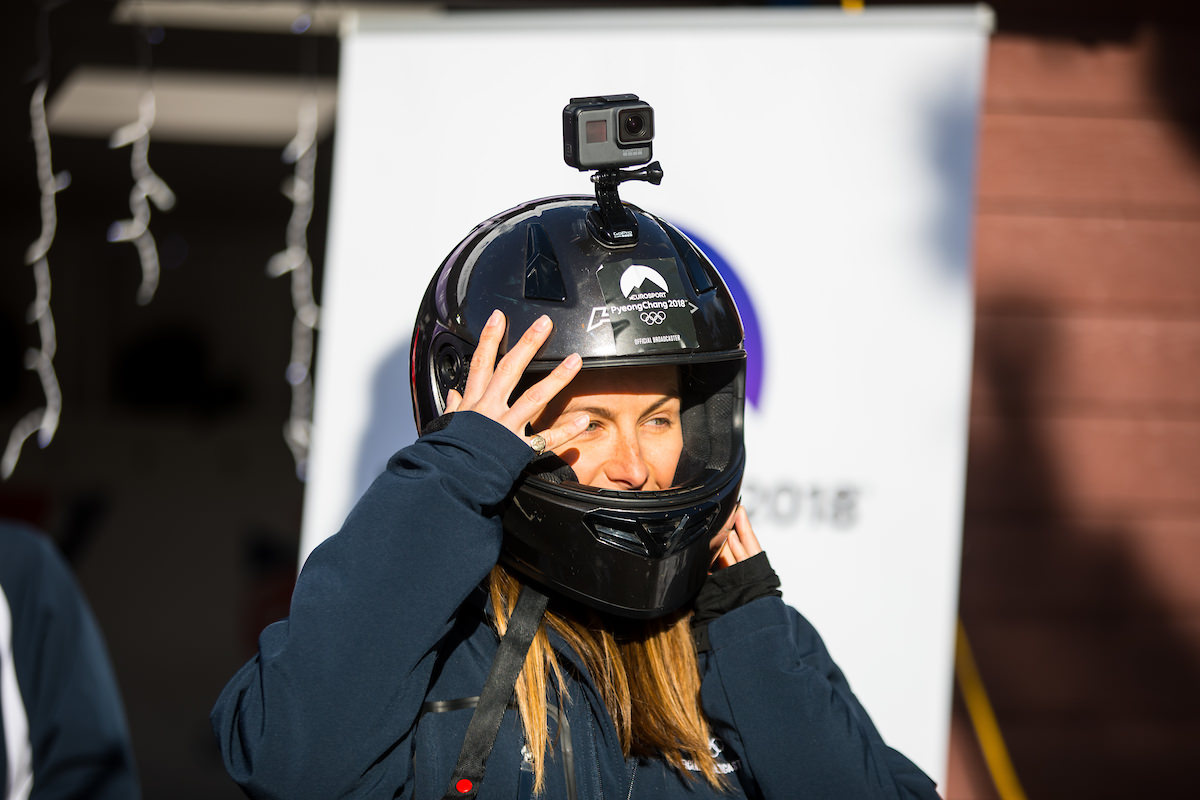 Going down felt fast, however when you reached the top of the slope, you had to come back down again, and that’s where things got really scary, not being able to see where you were going. I think it was the turnaround point that most of us started screaming! 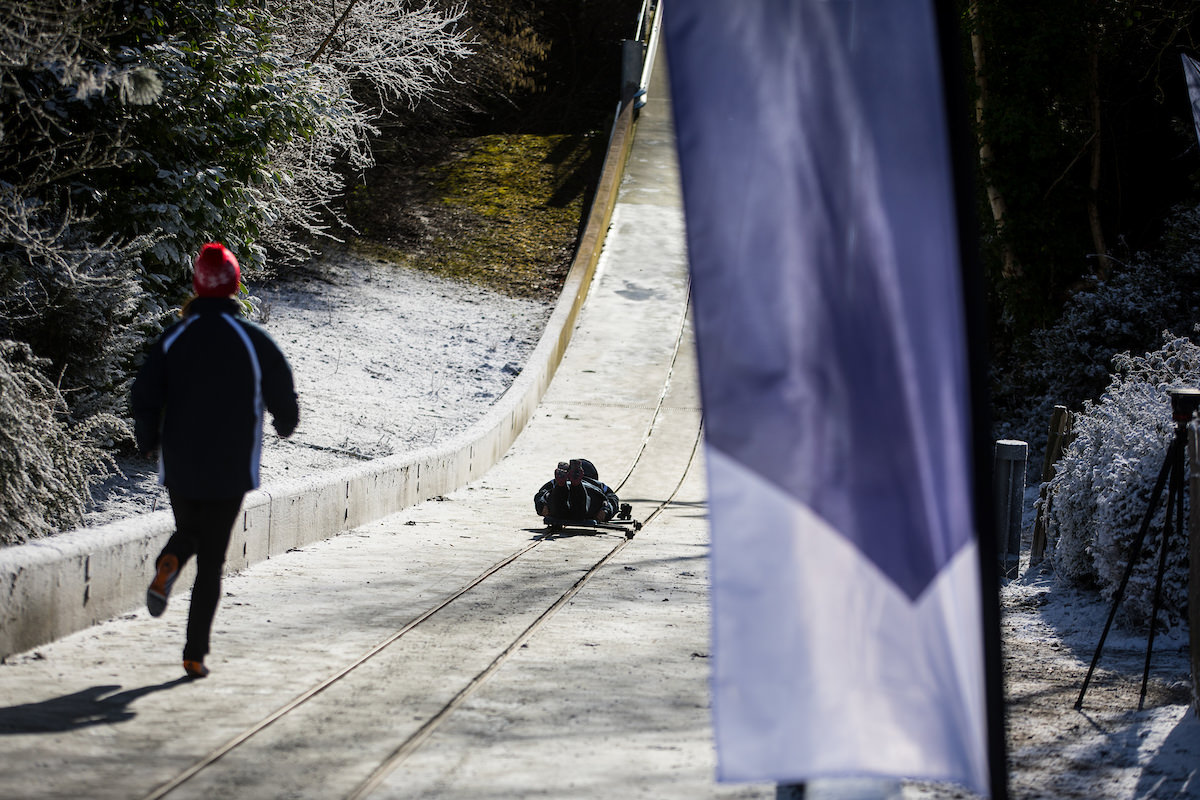 Jake has made an awesome Youtube video from the challenge which gives you more of an idea of what it was like!

For those that have been following the Skeleton in Pyeongchang, you’ll have seen that the Brits have come under fire for their new skin suits – and posting some seriously quick times (Lizzie Yarnold and Laura Deans clocked the fastest four times during the practice runs). I asked Shelley about these…

‘I’m 100% sure they would have had this all checked with the jury prior to racing, so in that respect if anyone has any issues they need to pick it up with the jury. Bearing in mind that these types of suits have been used at the previous three Olympics, it’s not necessarily new technology’

It appears that the suits have aerodynamic ridges built into the suits to comply with IBSF rules that ‘no elements whatsoever maybe attached either outside or under the race suit.” It looks like this is the first time the Brits have raced in these particular suits, and are posting lightening times, which is causing a stir, in particular with the US team.

Hopefully the training and hard work (and the suits) will pay off big time for team GB tomorrow, when Lizzie and Laura start their bid for Gold – you can watch it (and all the other action in Pyeongchang) on Eurosport or Eurosport player.