We’ve been in Sri Lanka for about 5 days now, and I’m only just sitting down at a computer to share some of the things we’ve been up to. Whilst it has been relaxing, it’s also been a very active holiday so far. After a long flight and transfer, we arrived at the hotel to meet up with the rest of my family and were greeted with a gorgeous sunset and delicious curry supper. 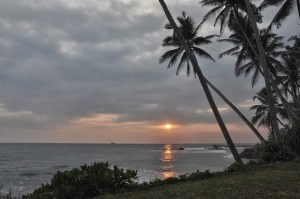 The following morning, we hopped into tuktuks and after a slightly hair-raising journey, made it to Mirissa beach. Hailed as one of the most beautiful beaches in Sri Lanka, we were just a little disappointed, however relaxing on a beach swing and paddling in the cool waters soon made up for it. 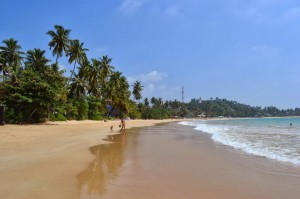 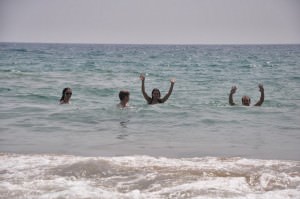 After a little while my Step-dad came along the beach saying that he’d organised a surfing lesson, and asked if Tom and I wanted to join him. Now, I’ve had surfing lessons before, and none of them have gone too well. After hitting someone else’s head with my surfboard, and having a panic attack during two separate lessons, I was not overly confident going in to this lesson. 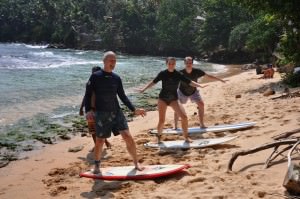 We went through the basics on the beach before hitting the shallows and practising paddling, and ducking under the waves- the bit I hate most.

Next, we made it to some very, very small waves to have a go at ‘riding a wave’ and standing up. 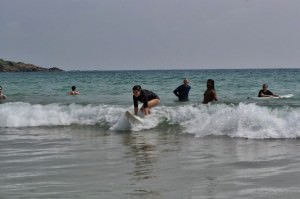 None of us were particularly good, and after taking a tumble and hitting my head on the sand, I decided that I would retire early. I gave it a go, but I think surfing is just not my thing.

I did enjoy watching the boys attempts though…. 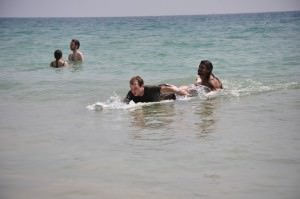 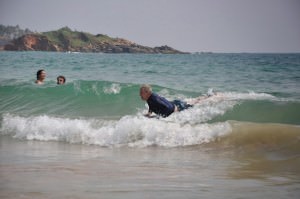 There seemed to be lots of guys offering surfing lessons up and down the beach, and our guy was working through one of the beach-front restaurants, costing about £5 an hour. We didn’t need to book in advance, although you might need to if you had a lesson through a proper surfing school. Sri Lanka’s surf scene is growing hugely, with numerous surf schools, hostels and bars along the beaches, it might be worth doing some research before you go if you’re a keen surfer to find out the local hotspots, or speak to other surfers. Our tuktuk driver said he’s up at 5.30am every morning surfing with his friends! 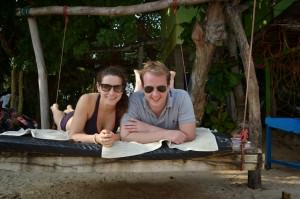 I’ll add more photos when I have a better internet connection, but at the moment it’s taking 30 mins per photo and my laptop is crawling with little ants!!

Have you ever tried surfing, or would you like to?