It’s now part of my schedule, and I don’t plan anything else in for a Monday after work. With the Boutique runs finishing last week, I was on the hunt for a new group to run with. Luckily, I recieved an email from Nike #weownthenight saying that they would be running a Monday night run club from Nike Town in Oxford Circus, and a Wednesday night training session in Hyde Park. Sounded perfect!

I managed to convince Leah that running was more fun than packing for her holiday, and she agreed to join me. Laura was also there for the fun- made it seem like another Boutique run with the girls!

Nike are working in conjunction with Elle Magazine for the women’s #weownthenight 10K in May. There was a photographer there taking photos for the Elle Street Style pages, wish I’d got a bit more ‘photo ready’. Oh and I obviously always run with my hair down! 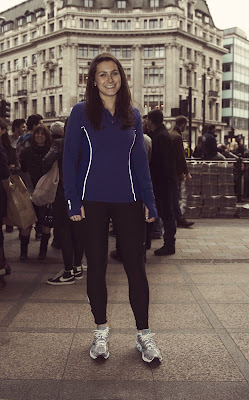 After a brief chat in store with Alexandra Heminsley, author of ‘Running like a Girl’ and Elle writer, who is about to run her fifth marathon on Sunday! Her book is officially on my ‘want to read’ list. 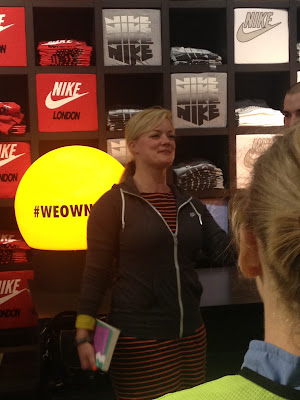 We hit the streets of London for a warm up jog to Regent’s Park, can you spot me in the photo below? 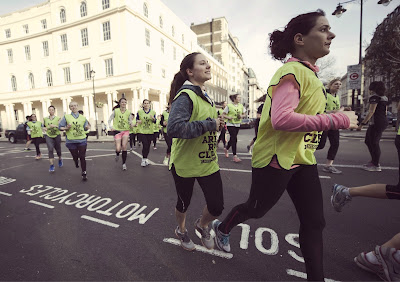 Once in the park we started a warm up led by the expert Nike trainers, including some classic starjumps and high knees… 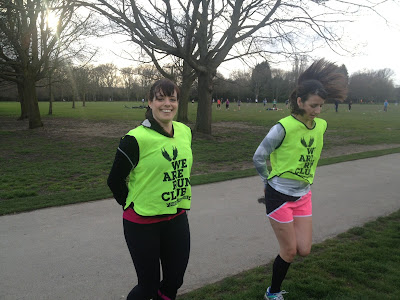 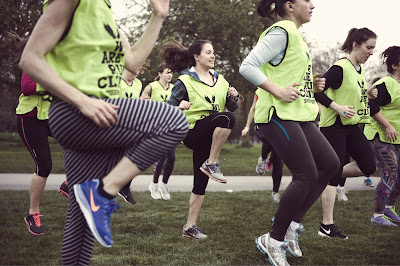 Stretching out the shoulder muscles- LOVE this photo of Leah! 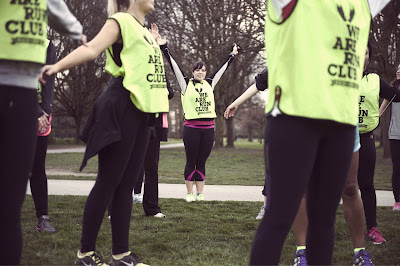 A great aspect of the Nike Run club was the abundance of trainers and pacers. We were split into three groups, a beginners (covering 5K), an intermediate (7K) and an advanced (9K). Leah and I were feeling a little sore from the weekend, and decided to stick with the intermediate group. And WOW, were we glad with that decision.

The plan for our group was to do sprint training. We jogged to the Inner Circle of Regent’s Park, and from there, started our sprints. We would sprint for 1min, then jog for 1min. Repeated for a total of 6 times. 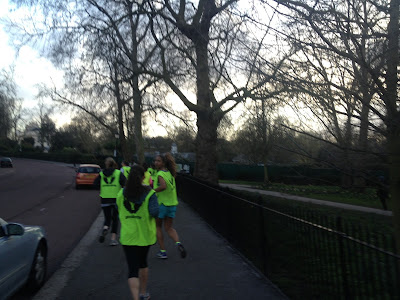 I quite enjoy sprinting, and found that I could quite easily sprint for a minute, however my recover was a little slower than I would like. Previously when doing anything like sprint work, I’ve walked as my recovery, so jogging aftewards was a change, and very good for my fitness, I’m sure. I used to love running the 100m and 200m at school, anything longer I counted as long distance. How times have changed!!

I’ve only run once in Regents Park before, and that was during my 20 miler marathon training last year. It was so beautiful, and I didn’t realise it was so close to Oxford Circus. 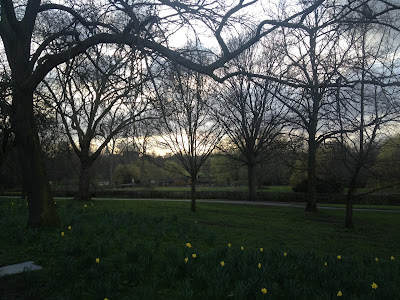 The weather was perfect, and we all appreciated that Spring had finally arrived. I am so used to running in cooler weather that I was wearing my Sweaty Betty merino wool top, which was a little too hot for Monday’s run, particularly for speed work! I was a sweaty mess by the end! Especially after sprinting it back to the store. 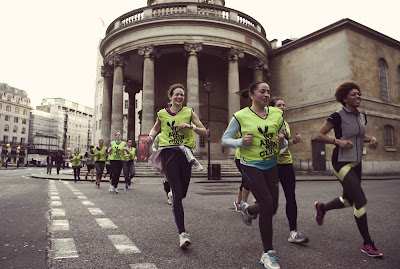 We ended up staying right in the middle of the intermediate group, so I know we made the right decision and will stick in that group next week. Laura, who is much speedier than us, pushed herself in the advanced group and said it was a real challenge.

I wouldn’t have pushed myself like that if I’d been running on my own on Monday night, and it was great to feel like I’d achieved something that evening. The trainers were all super friendly and encouraging, and the whole evening was incredibly well organised. It also helped that there were Crussh brownies and cookies alongside the water when we got back to Nike Town! 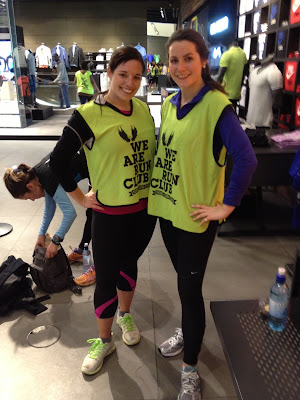 The intermediate group ran a total of 4.1 miles (plus the warm up jog before I started my RunKeeper). I’m looking at getting a Heart Rate Monitor (I know I’ve talked about this before, but I’ve really nearly decided which one now!) and am looking forward to seeing what my HR looks like after sprint work. 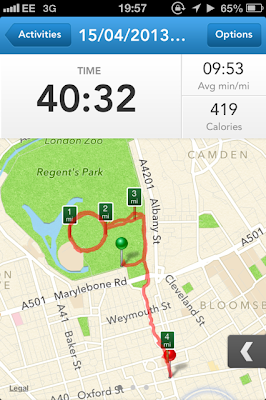 Anyone is welcome to join the Nike Run clubs, hosted across the UK. Nike Town London organises runs on a Monday, Tuesday and Thursday (women only).