Most UK races start around 10ish, so it was a little bit of a surprise to discover that North London Half had an 8.30am start, however it actually works in my favour having an early run. It did mean that my alarm was set for 5.30am to arrive at the start in Wembley around 7am, plenty of time to eat, hydrate, park and pick up my bib.

Just as I was joining the HUGE queue for the loo in Wembley stadium I bumped into my friend Francesca from Women’s Health. We chatted about our plan for the run and discovered we were both hoping to run 8.20-8.30 min miles, so we decided to stick together for as long as we could and make the hills of North London more enjoyable. 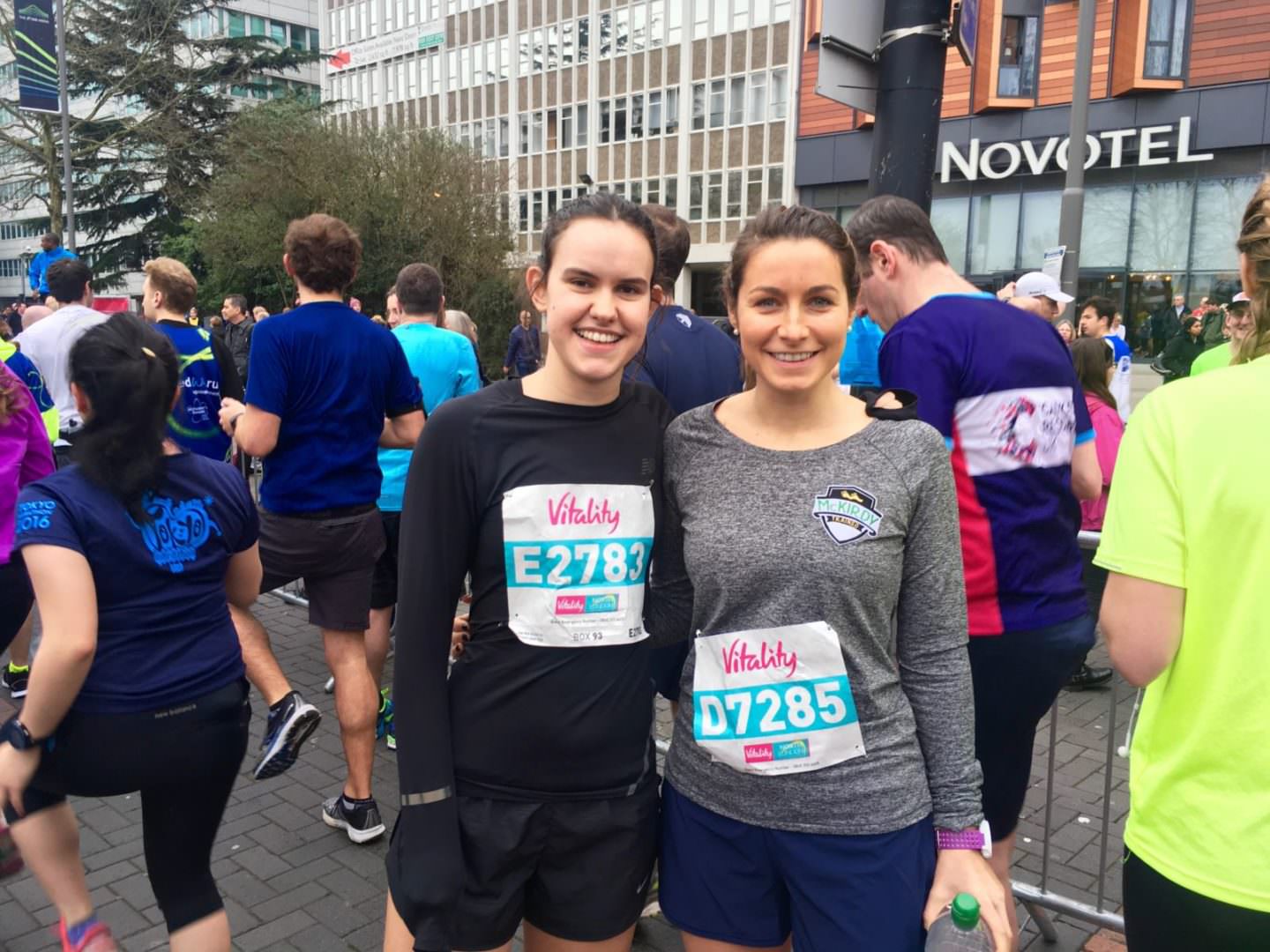 This race was really well organised, we were able to make a second trip to the loo, complete our warm up and glute activation before getting into our corral for the start.

The only thing I wasn’t prepared for about the race was the hill start. We turned the corner and everyone started running uphill, before we’d even crossed the start line… WHAT? There are enough hills on the course, you don’t need to add another one. I tried to power walk up to the start but gave in and started running as I didn’t want to lose Francesca before we’d even started.

Having run this race in 2015, albeit when the course was slightly different, I knew we were in for a hilly run – perfect training for Boston.

As mentioned, we were shooting for an 8.20-8.30 average pace, however the hills made it really hard to stick to a specific pace, so we stuck with ‘comfortably hard’. 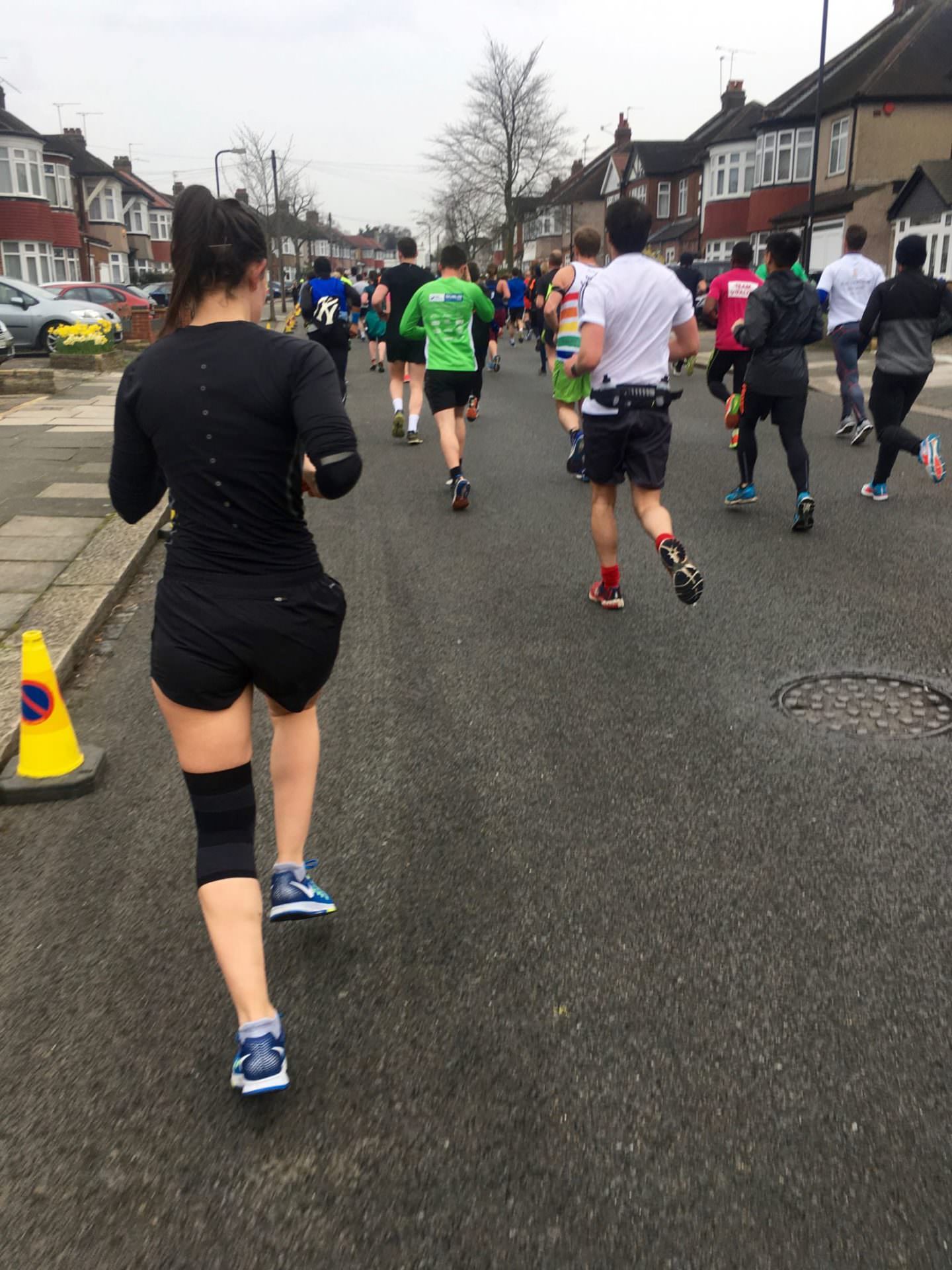 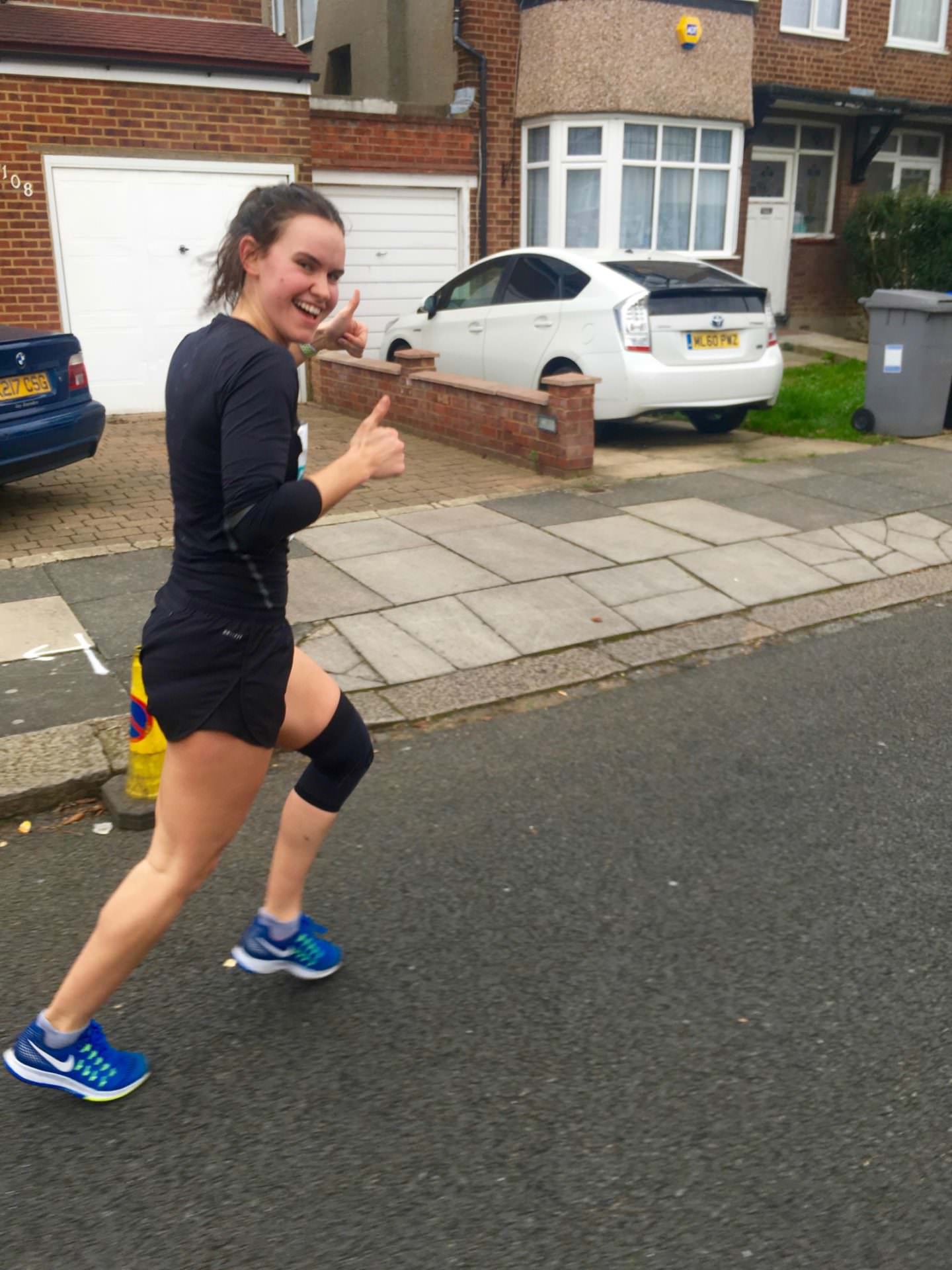 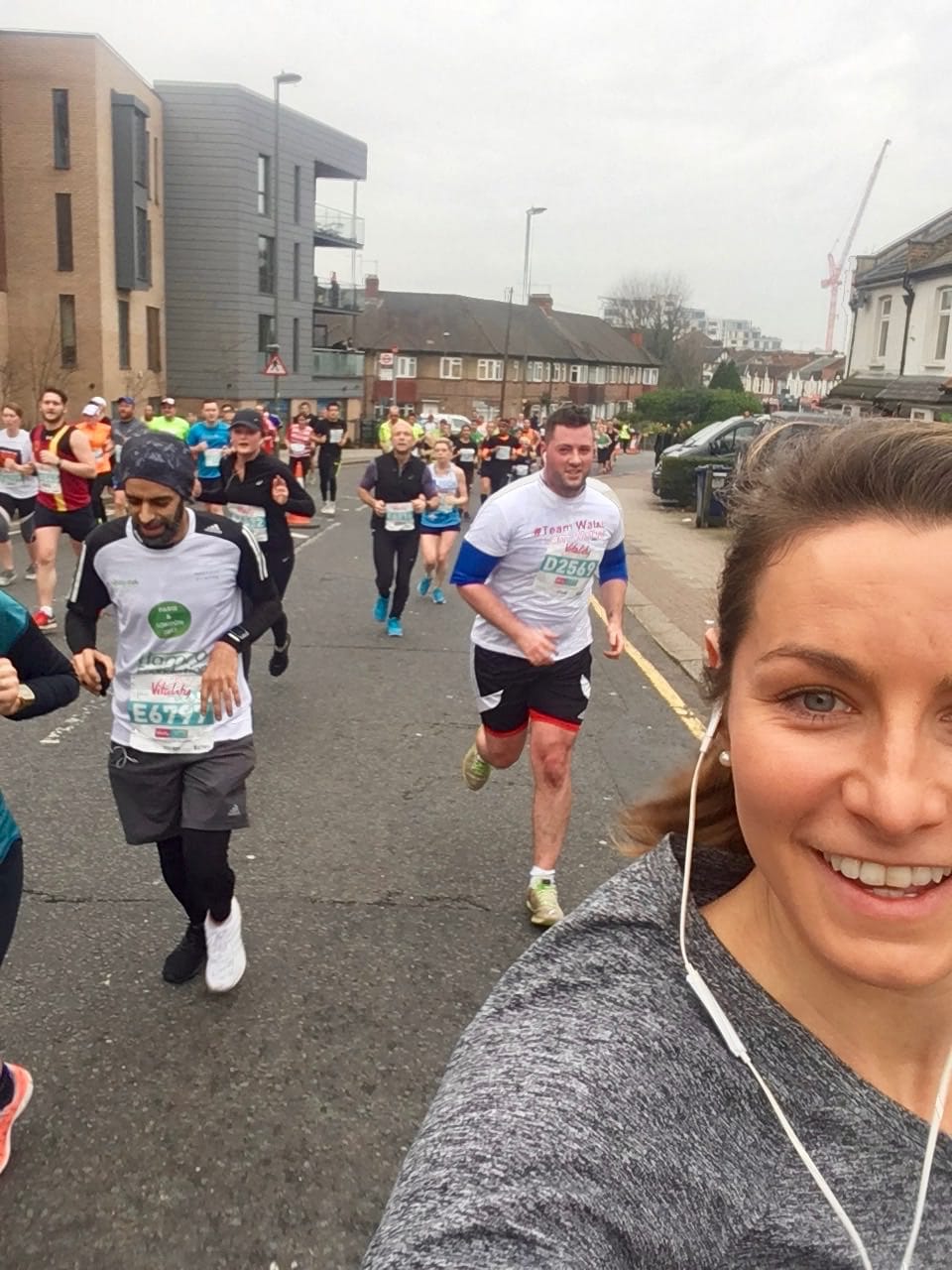 The halfway point is at Allianz Park, Saracens Rugby ground, and running along the track there was a welcome break from the undulating road.

And then you head back the way you came, which is great because those hills you ran up, you now get to run down. But it also meant that we knew exactly how many hills we still had ahead of us, the worst of which is at mile 10, where I spotted the smiling Polly, who shouted words of encouragement as I tackled the hill. I just kept saying ‘heartbreak hill’ over and over, knowing this was great practice for the Boston course, pumping my arms and keeping my breathing steady. I was pleased to stay strong, overtaking quite a few people!

After this brutal hill, I mentioned to Francesca that I thought we were going to finish under 1.50, and that I’d actually never done that before (I haven’t fully raced a half marathon, feeling fit, in years!) 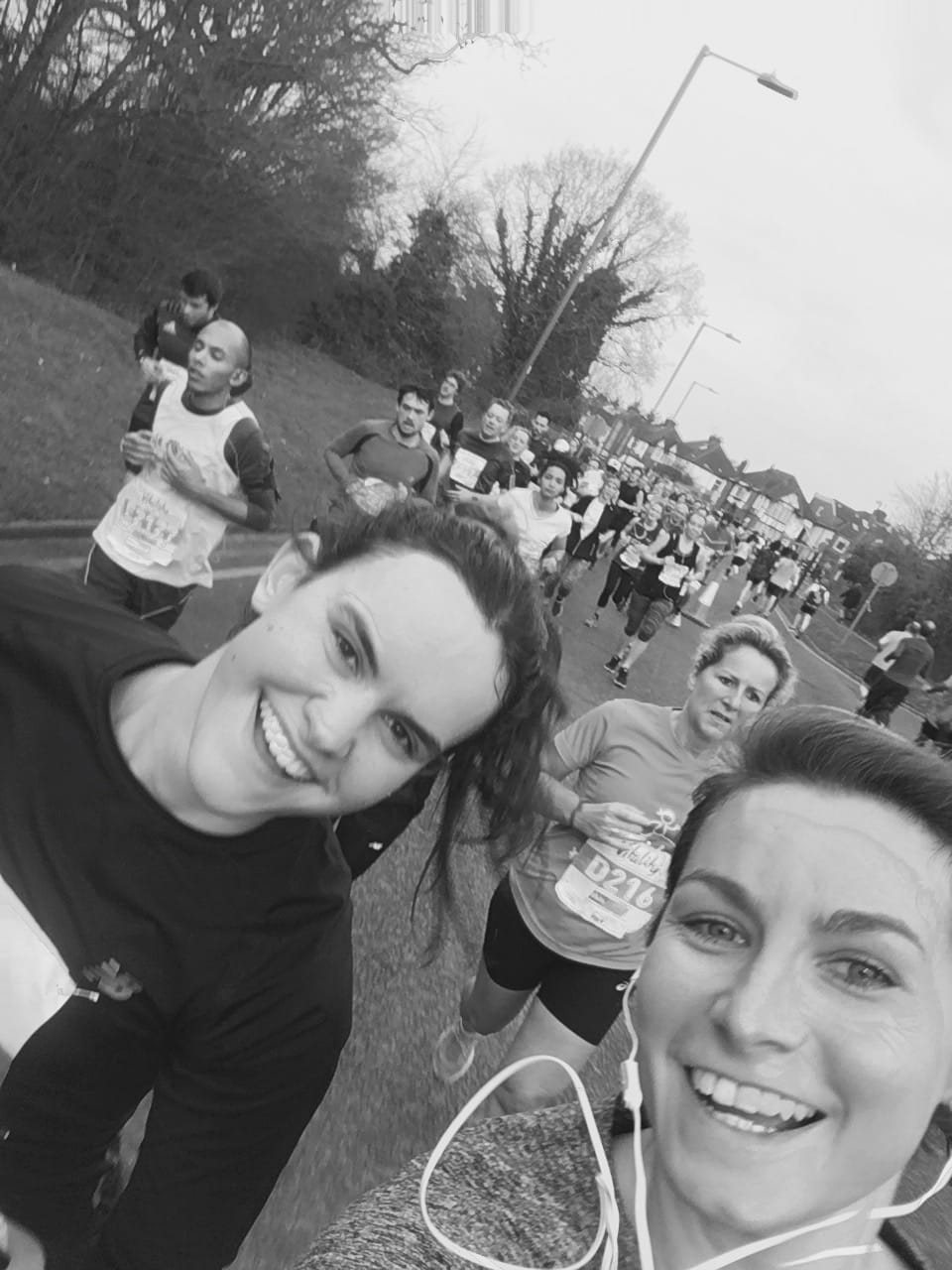 With 3 miles to go we kept running steady, picking up the pace a little as we reached the 800m to go mark – they throw in a couple more inclines before you get in to Wembley stadium – sprinting it in to the finish line. 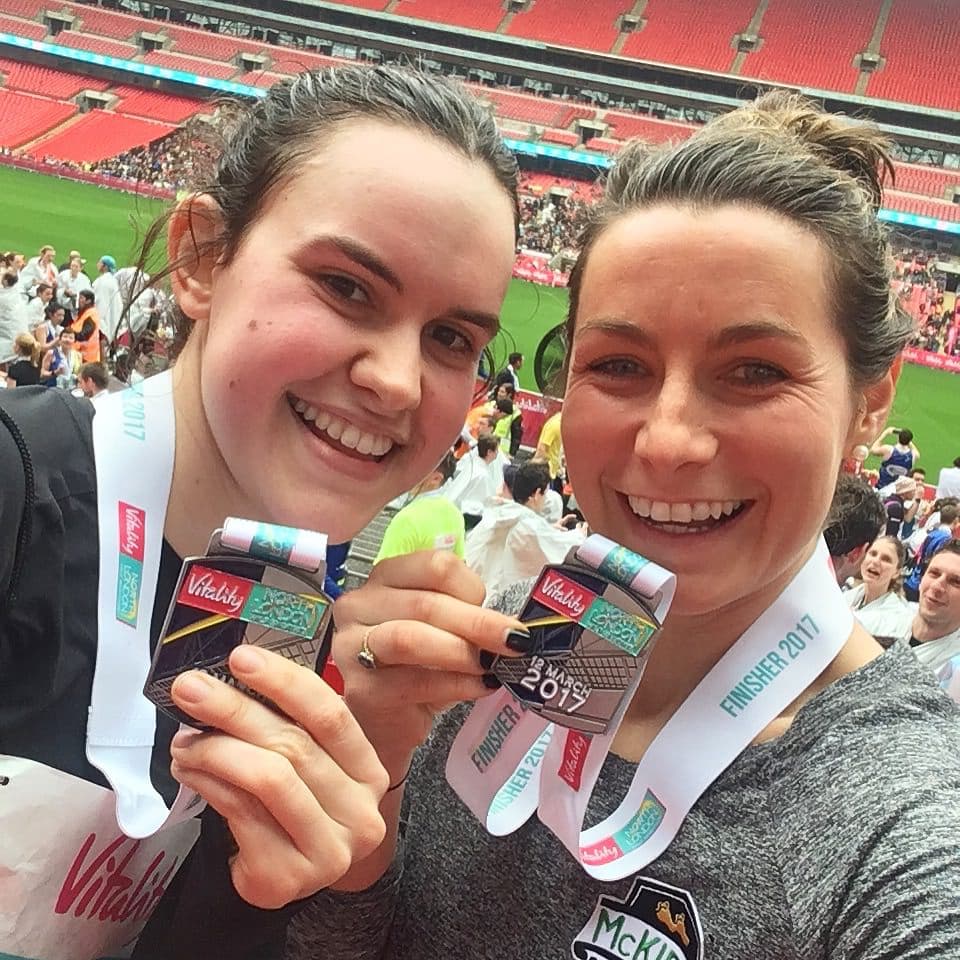 A 4 min 15 second PB, and on such a challenging course, I am so thrilled. Let’s see what I can run at Reading Half next weekend…

Who else ran North London Half? Or another race this weekend? Any big PBs/PRs?