I’ve spent a lot of time with my friend and photographer, Anna, over the past year. She is Zero Waste, and what I once thought of as extreme, is now making a lot more sense. (She has a great informative blog here – but I’m going to get her to do a guest blog on TheRunnerBeans too). 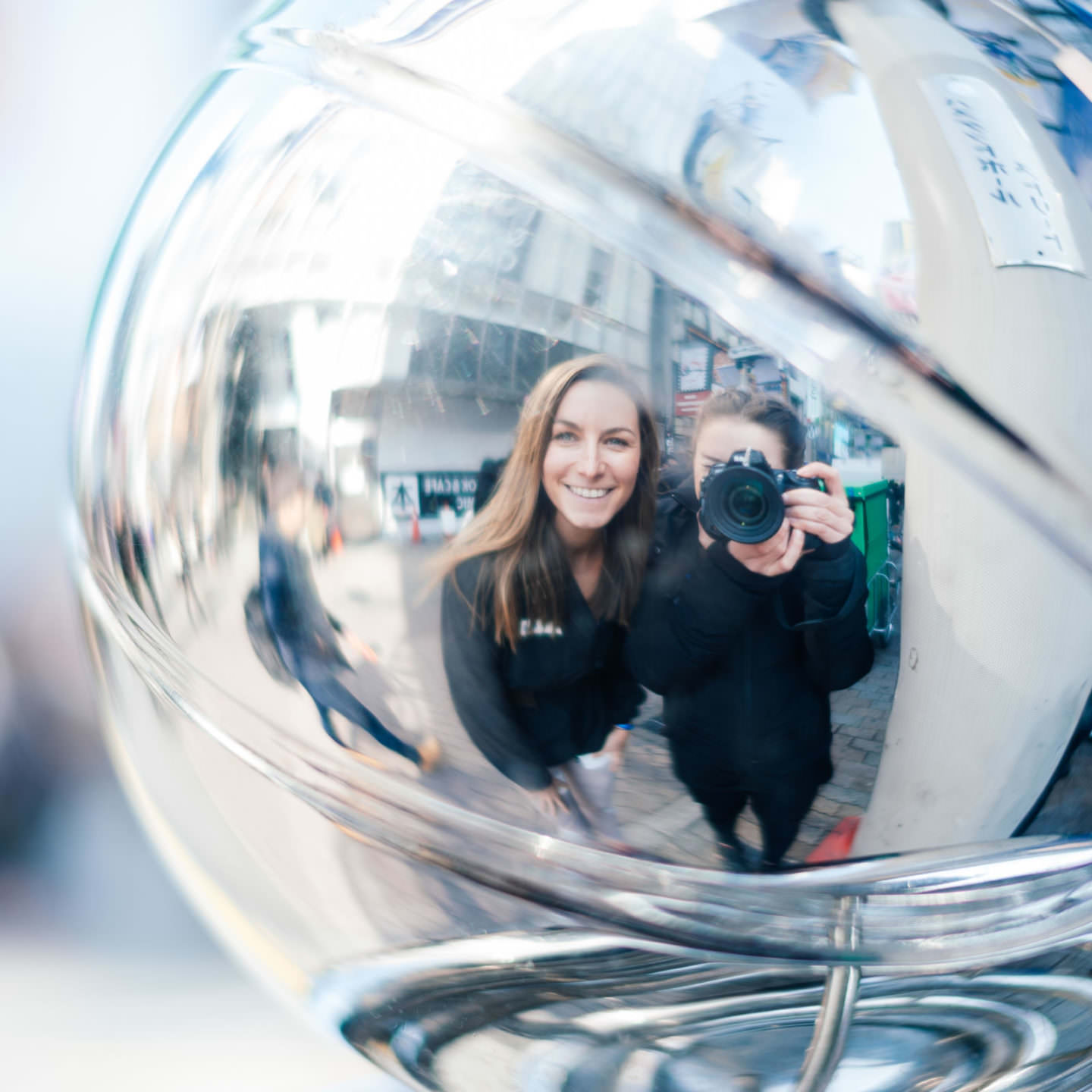 After being incredibly impressed with the lack of rubbish along the Tokyo Marathon course, I started to think about how the races here and in the US could be more eco friendly. And it is possible.

CIM, the California International Marathon recently announced that it had earned a Gold level certificate from the Council for Responsible Sport.

Here’s how they did it;

Other big races that have earned certificates (gold, silver or bronze) are the  LA Marathon, Marine Corps Marathon and Chicago Marathon. You can find a full list here – I’m really disappointed that only four UK races have made it on to the list, and those were from 2009-2012. It just doesn’t seem good enough.

So what else could other races do? Here are a couple of my ideas, I’d love to hear your suggestions too…

-Promote people wearing hydration packs or bringing handheld water bottles to be refilled at aid stations. Of course, I know that this isn’t possible during every race or you might not want to slow down if you’re gunning for a PB, but it could at least be an option! 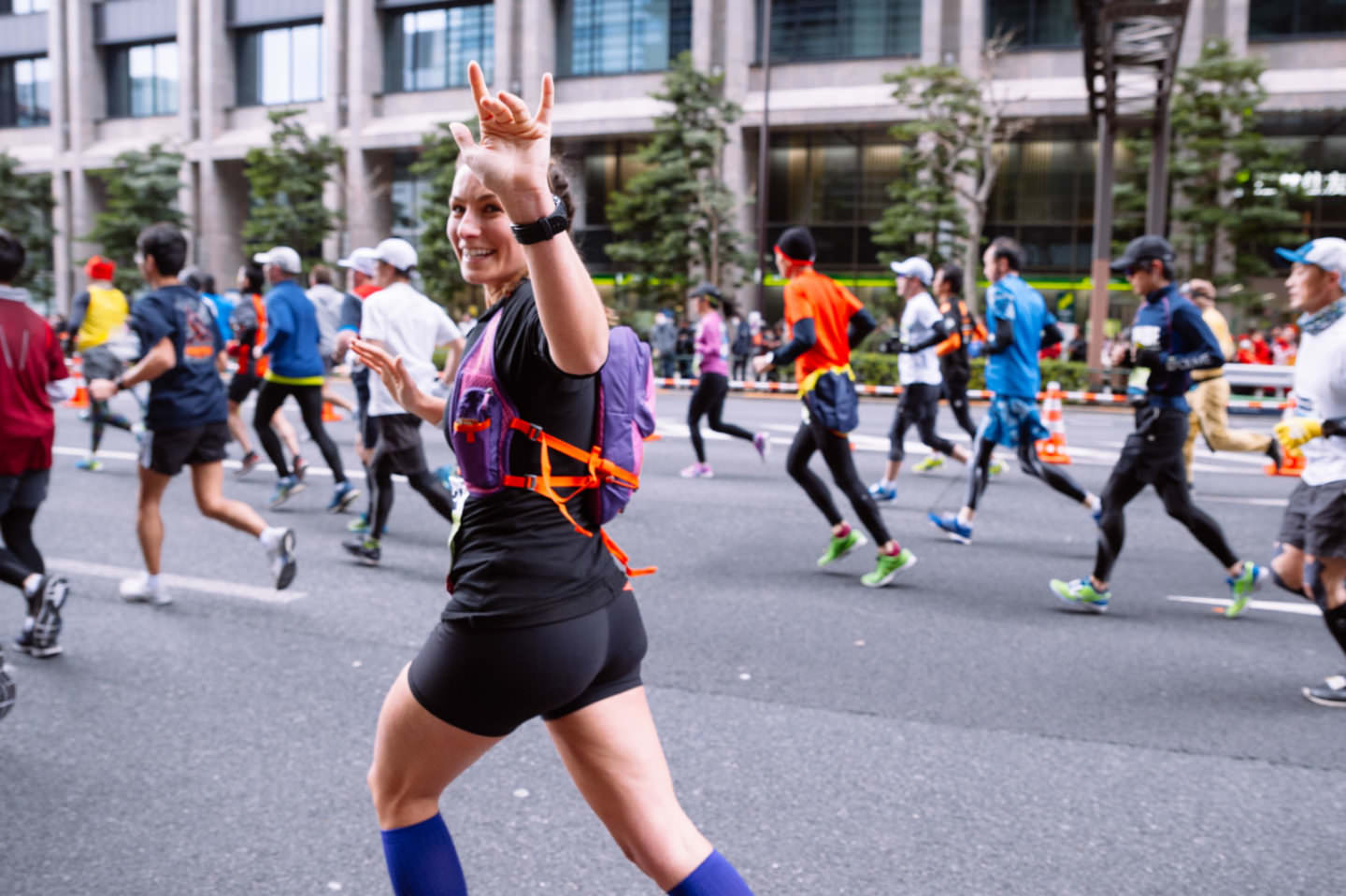 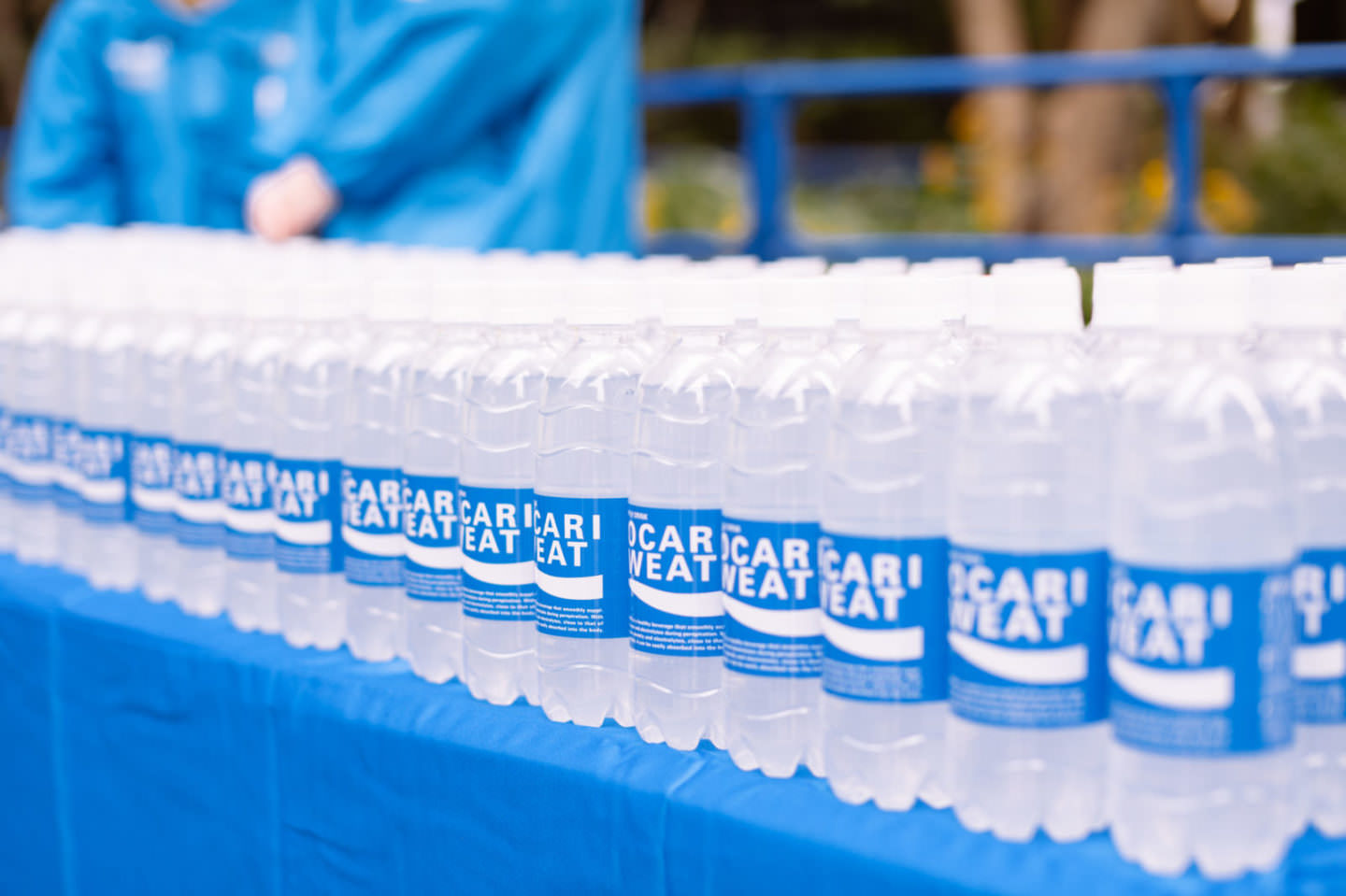 – Cups or bottles…I actually don’t know which is worse for the environment. ON the one hand, I prefer bottles as I’m more likely to hold on to it for a while and find cups hard to drink out of…but I imagine there is more wastage in bottles… What do you think? Could they have paper cups? Did you know that there are 2 million cups discarded on New York City Marathon day…

-Optional packet send outs. It’s a waste of paper (and money) to post them all out. I think you should be able to have the option of pre-race or race day collection, like a lot of the smaller races do. I’m also not a fan of the goody bag stuffed with flyers and other things you don’t want/need. I love when you can choose the bits to pick up at the end of a race, that way you only take what you actually want. And not the weird protein bar, or the random shake  (on that note, the first year I ran the London Marathon there was a Mars bar in the goody bag…I have never had a chocolate bar in a goody bag again, what happened to them?)

-Opt in finishers t-shirts, and without plastic packaging on them! Personally, I don’t often wear my race t-shirts and would rather save a couple of pounds on my entry. For those that do like the race t-shirts, there should be an opt in button on entry, and have an area for t-shirt collection pre or post race. And they do not all need to be individually wrapped in plastic, it’s crazy! I recently read that the Cherry Blossom 10 miler (totally on my bucket list) has runners who want a medal opt in and pay extra for this…a great idea to reduce waste for those who throw their medals away or let them fester in a drawer somewhere.

-More bins along the way for rubbish, it was great not to trip over the discarded bottles, tread on sticky gel packets or crunch along cups. This should be the case for all races – I think it’s the races responsibility to make sure there isn’t trash left en route by the runners. My friend Char sent me this article about the recent Brighton Half Marathon, suggesting runners should be fined or disqualified for dropping litter…what do you think? 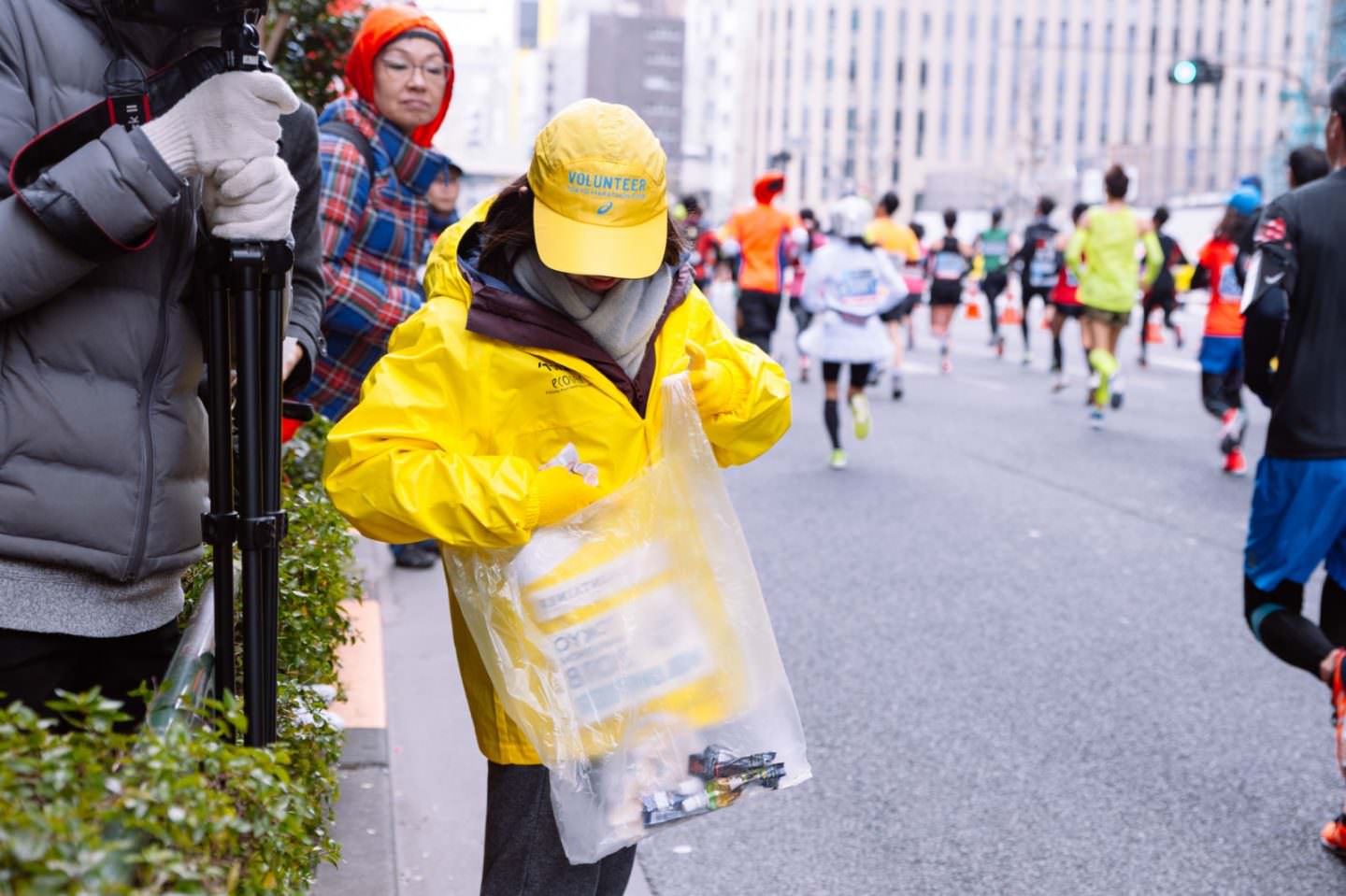 -Promote the eco side of the race! Make it a selling point. Personally, the Vacation Race Series in the USA and the Seychelles Half Marathon both hold appeal partly because they are pitching themselves as eco races. (I guess it does help that they’re in beautiful locations too!)

Here’s what the Vacation Races have to say ‘Having our races so close to the national parks, unnecessary waste and trash is something we are strongly against. We are dedicated to maintaining a clean race and preserving the beauty of the area we run in. There is nothing that will ruin a view more than seeing a piece a trash in plain view from a breathtaking landscape.

That being said, one of the most important things in a half marathon is ensuring that aid stations are plentiful, efficient and that they do not run out of water. Hydration will make or break a race.

For this race series we have implemented Cup Free Racing. We think it is a great thing. What we do is buy a hydrapouch for everyone who wants one and include it in your racer bag. When you register we will ask you to indicate whether you want a hydrapouch or not. You also have the option to bring your own system. It can be anything that works for you, so long as it does not produce trash.

We then have self-serve water stations set up along each course. We keep a sleeve or two of cups at each station in case of emergency, like if your belt falls off, or you lose your bottle. The cups are really there only for emergency, but are available.

The hydrapouch is not a water bottle. You run with it empty and attached to your belt or waistband. It is super lightweight, so you can hardly tell its there when running. When an aid station comes up, you pull it off your belt, fill it up in stride, drink it until you are done, then it goes back on your belt. Easy.

The other real bonus, is that you can sip water way past the aid station, instead of having to drink the entire cup right away in order to get it in the trash can. You can drink as you need, and you don’t get that big hit to your stomach.

Past race experience has shown us that the cup free system is very favorable among our runners. Aid stations were well organized so there was no wait to fill up, the hydrapouch is light and in no way cumbersome, and the course remained clean. 83% of runners found the experience completely satisfactory. When we cleaned up after our inaugural race at Zion, all the trash we found was 6 Goo packets.’

-The Singapore based Income Eco Run is trying to encourage a zero waste race sending out e-certificates to finishers post-race. Bike racks area available for runners to cycle to the start line, and biodiesel is used for the generators. They want to encourage 1/10th of their runners to be ‘zero waste runners’. those who will bring their own bottle to aid stations, and opt out of the recycle medal and t-shirt.

I’d love to know what you think? Would you be a ‘zero waste runner’ or would you miss the medal? Any ideas on how more races could be more environmentally friendly?