My Mum and Step-Dad are my biggest fans, they have trekked across the UK (and halfway across the world) to support my running, and now much to their delight/disappointment my Step-Brother is getting in to running and triathlons so they have someone else to support. This weekend they watched him take part in a 3hr obstacle course through what looks like a LOT of mud. My mum’s always asking to write blog posts, and this one was at least relevant to running, so take it away Mum! 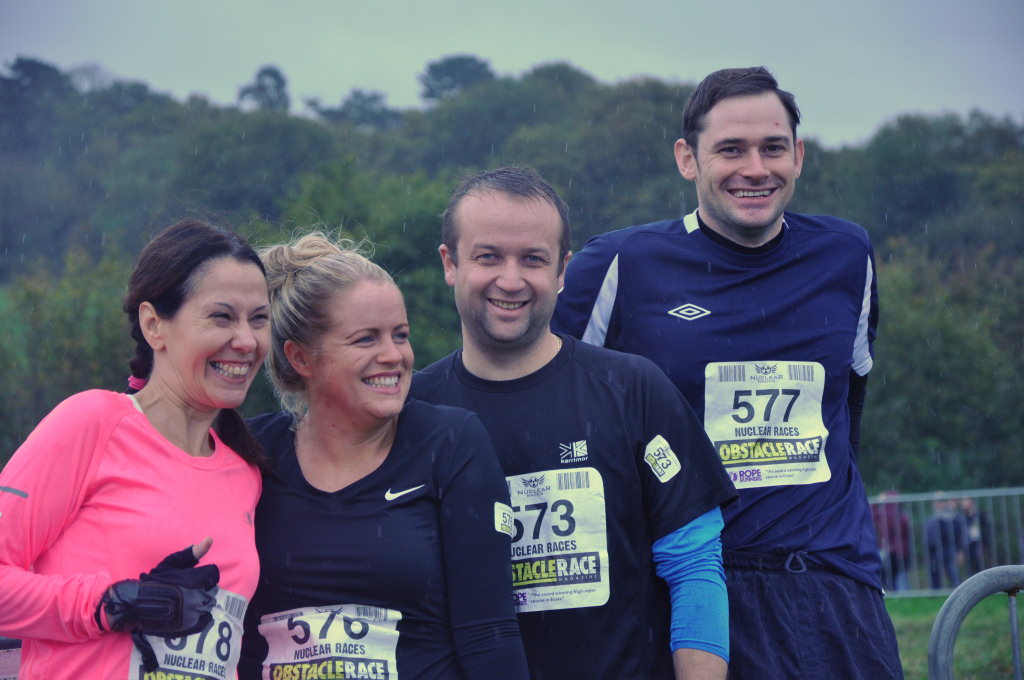 ‘There’s getting covered in mud – you know, the one with clean towels, soft pan pipe music, and scented candles – and then there’s the one with cold water, steep hills and people wearing lycra. Today was my first experience of the latter. We went to the Secret Nuclear Bunker Estate in Brentwood, Essex with several hundred other people to ‘run’ (ok, support) this 8km race.

Well-organised, with 100 marshals working to ensure everyone’s safety, we were soon drinking coffee, munching chocolate cookies and staying dry in the Big Boom tent. Our team, my Step Son Tony and three of his work colleagues – Robin, Rachael and Trish – were warming up nervously, being Nuclear Virgins, ready for their 11.30 am start. 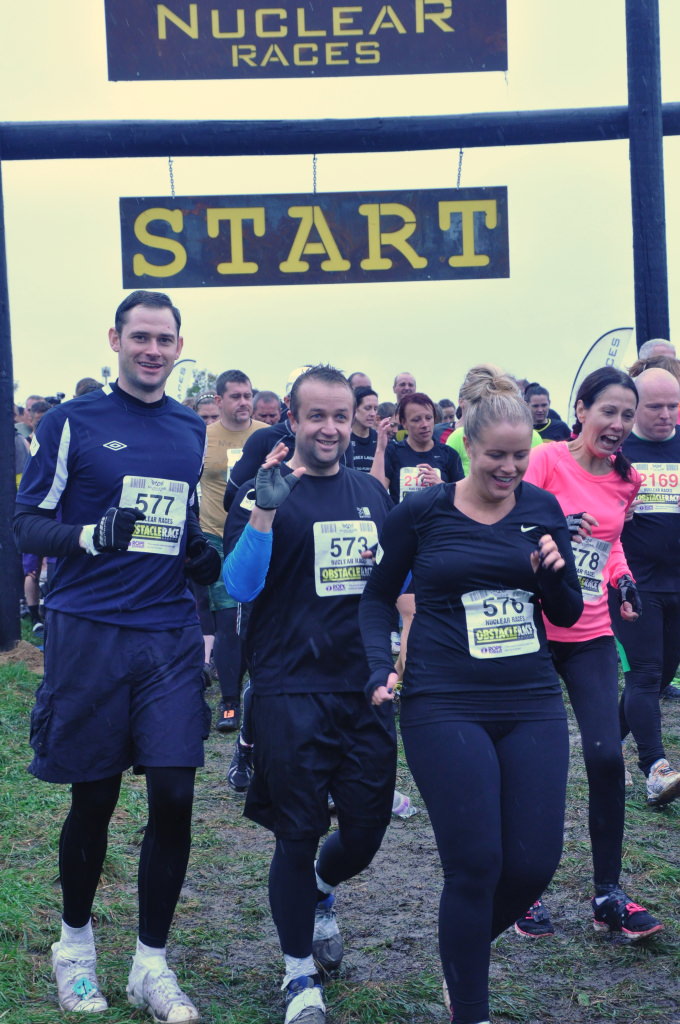 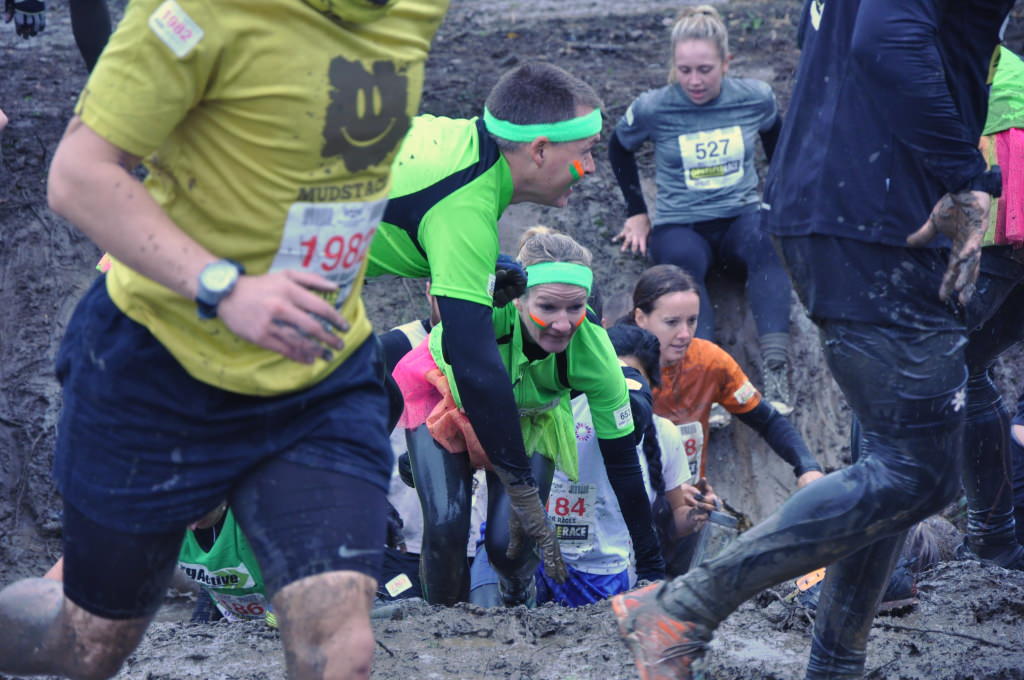 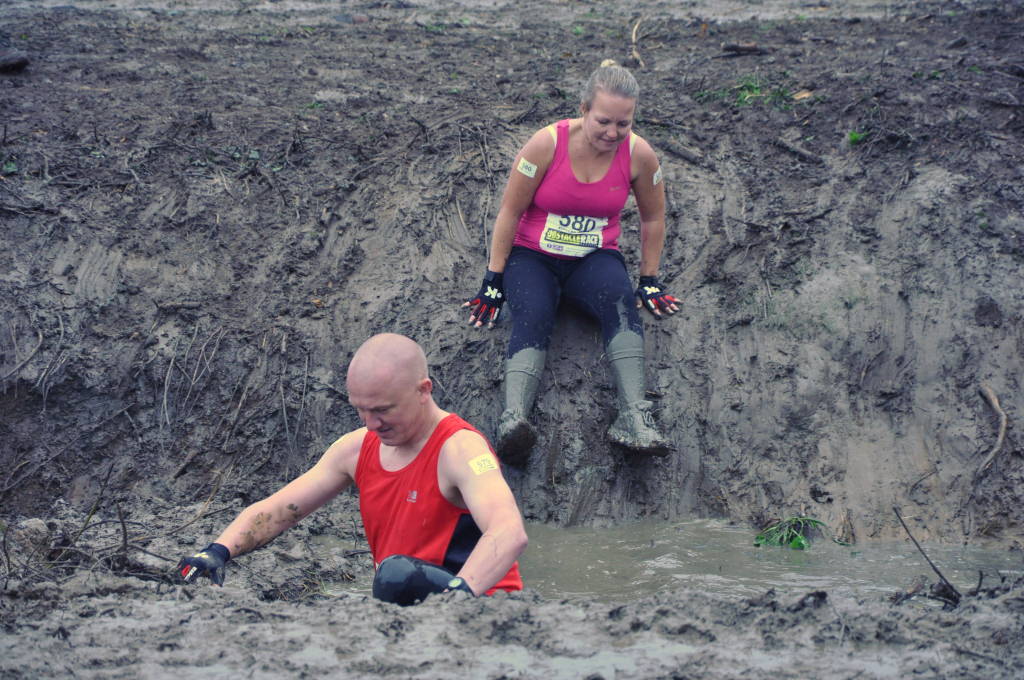 And they were off! Judging by the shocked faces, no-one expected the first water filled ditch less than 100 meters from the start. Some took the direct approach, some waited as if for a miracle… and it wasn’t even one of the actual obstacles! But at least everyone had tasted the mud and got their socks wet.

There was a well signposted spectator section towards the end of the route with four or five obstacles to rotate around and cheer your runners on. Dave and I decided to walk down to a slightly earlier water feature, albeit still at the end of the course. This did mean that we waited ages for Tony to appear and were beginning to worry if he had pulled out because of injury. It also meant we were able to cheer and guide random strangers who were the friendliest I have ever applauded on a race route. Amongst other comments, we had runners trying to persuade us to get muddy next year and many thanked us for our support. One even understood why we were our side of the tape, especially as he had just taken a nasty tumble! We even had one runner who had finished but came back to cheer his wife on. He recognised us from the run, and was amazed we were still there! He observed that it was much harder this year as the cold water in particular was causing many to suffer cramp and some to get rather cold. That explained a few we saw moving with those silver blankets, handed out by the ever-vigilant marshals. 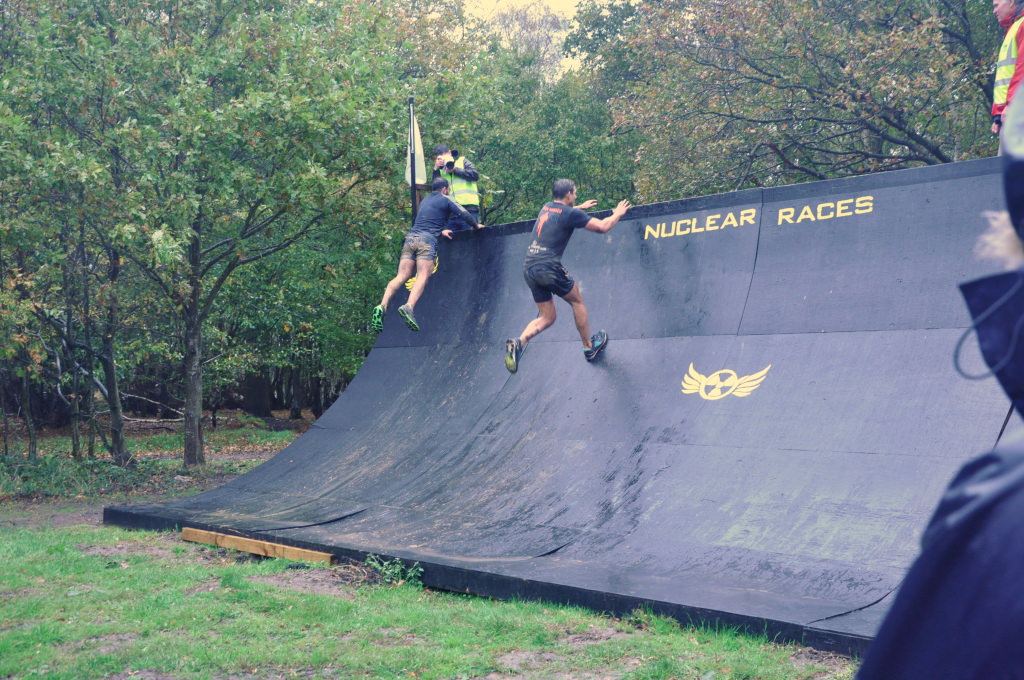 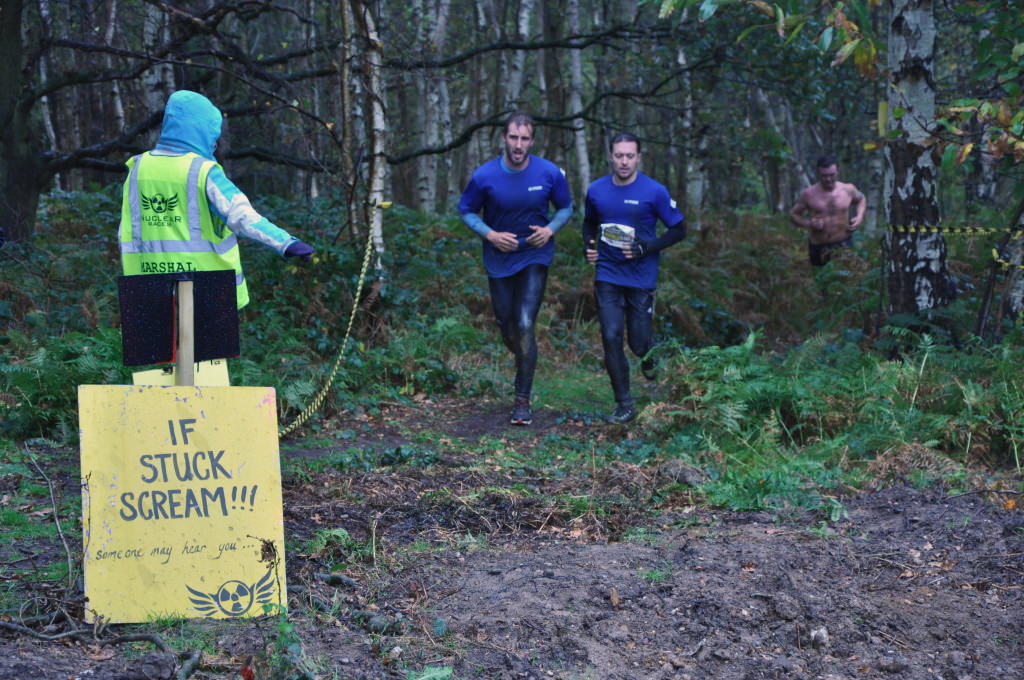 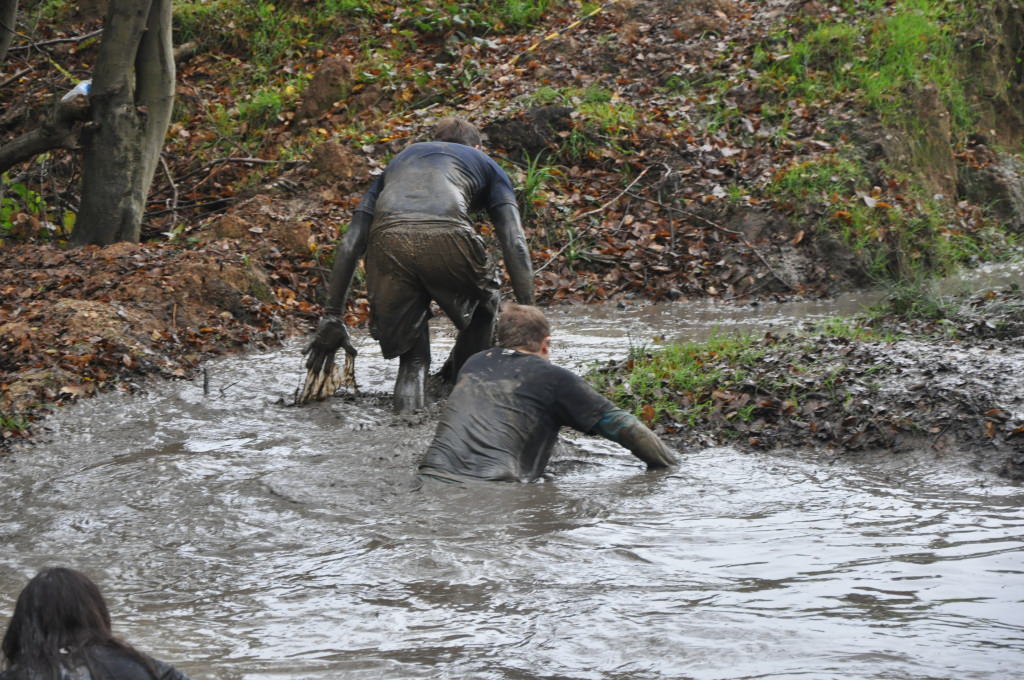 Having stood at that ‘puddle’ for some time, we encouraged tired legs to ‘stay right’ rather than have to swim to the other side. Amazing how many people – including Tony – took that ‘other right’ turn!

Lucky the fields have got the winter off to recover… 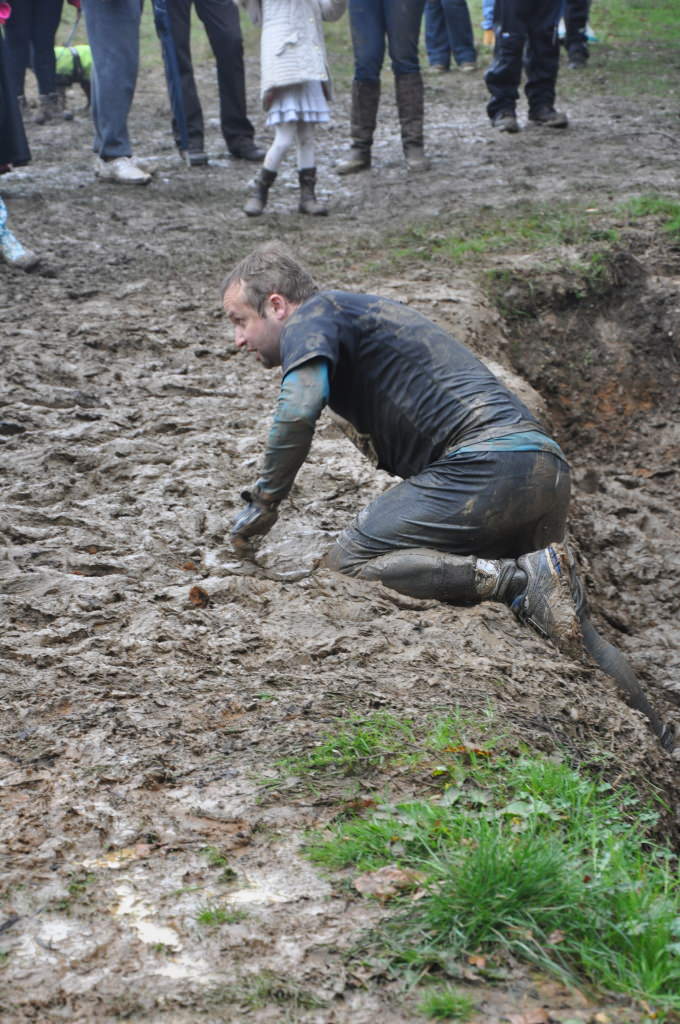 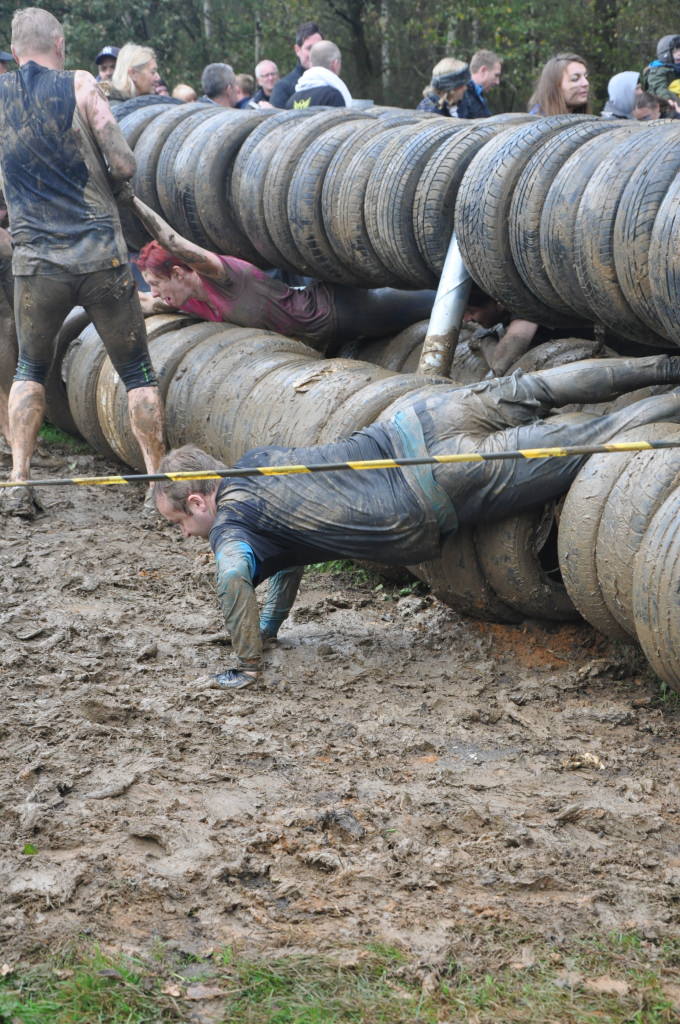 With so many obstacles at the end, we had to rush to get those crucial photos as if the mud-filled trainers weren’t evidence enough! Regular runners will not be surprised to know that Tony’s first coherent words were ‘I’m definitely doing that again next year, and Dad, so are you!’  His observations were that it was more about upper body strength rather than cardio fitness, but he loved the zipline, the swim, the climb, the crawl and the sacks of potatoes to mention but a few of the creative challenges en route. So next time you are lying under that face-pack, think of the fun you could be having with an all-over plastering of the muddy stuff!’ 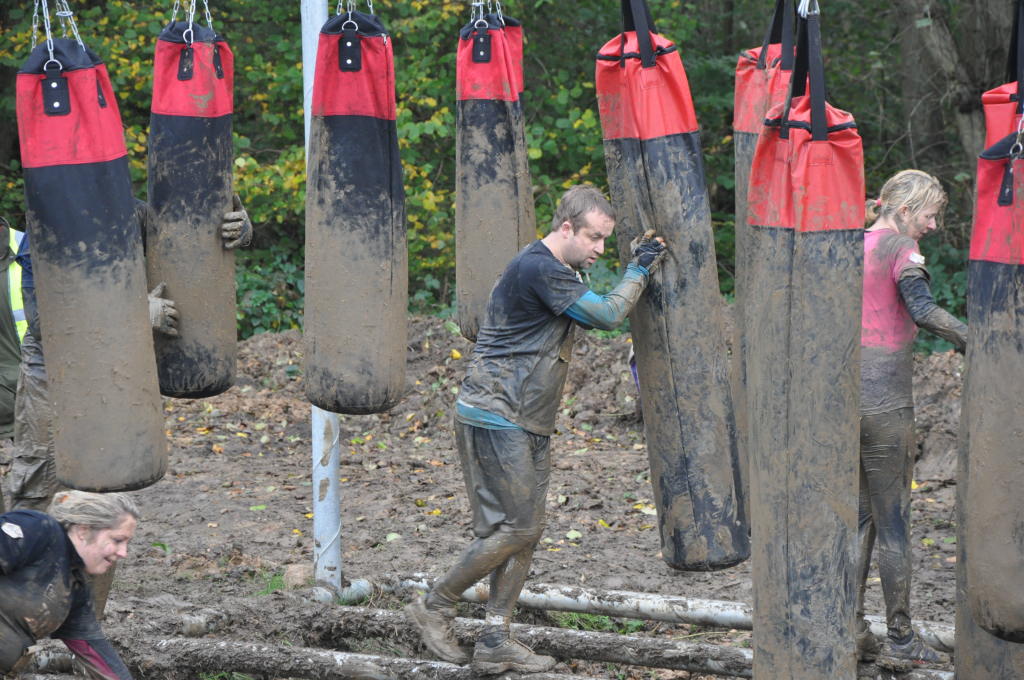 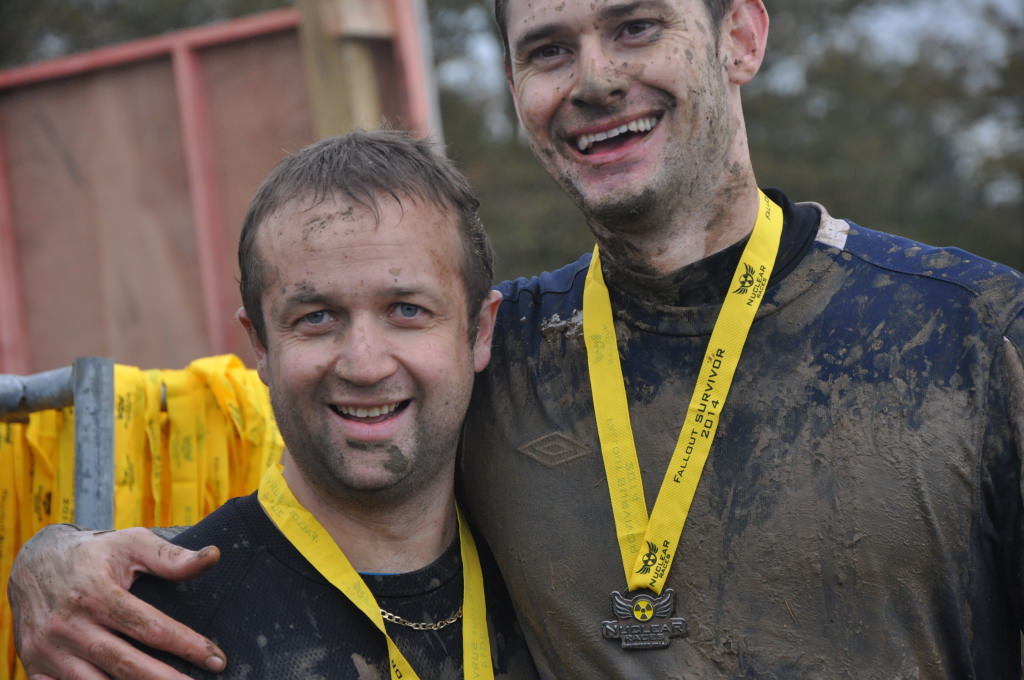 Editor’s note- I am definitely signing up for an obstacle course, they look like so so much fun! Well done Tony for finishing, can’t wait to do one with you!