‘What if people can hear me poop?’

One of the conversations between Zoe and I in the build up to the start of the New York City marathon. We’d chosen to use the bathroom at the Staten Island Ferry terminal rather than having to brave the porta loos that line the start area, which may have been the wrong decision.

It turns out the 10 minute buses from the ferry port to the start zone ended up taking close to an hour, leaving us very very late to get in to our start corrals. In fact, they were closing as we ran through, threw off our rather ridiculous throwaway clothing, and made the wrong decision about a last minute wee. 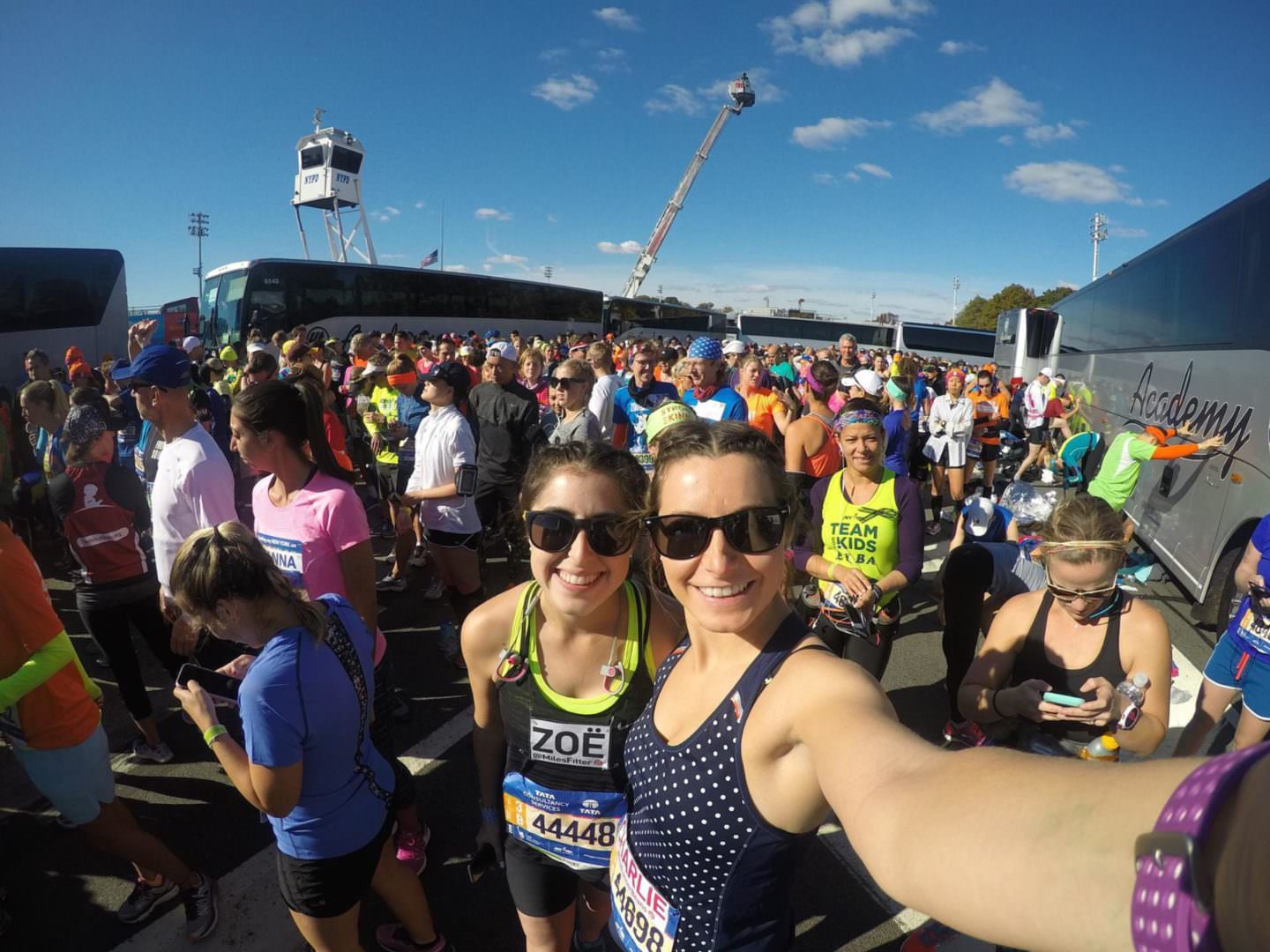 So we made it to the start line with time to hear ‘New York, New York’, but not enough time to get properly nervous about the 26.2 miles ahead…

Back in 2013, we’d both started the New York marathon on the bottom of the Verazzano bridge, but wow what a difference it makes being on the top in those first two miles. The sun was shining, everyone was in great spirits, and we had the most insane view across New York. 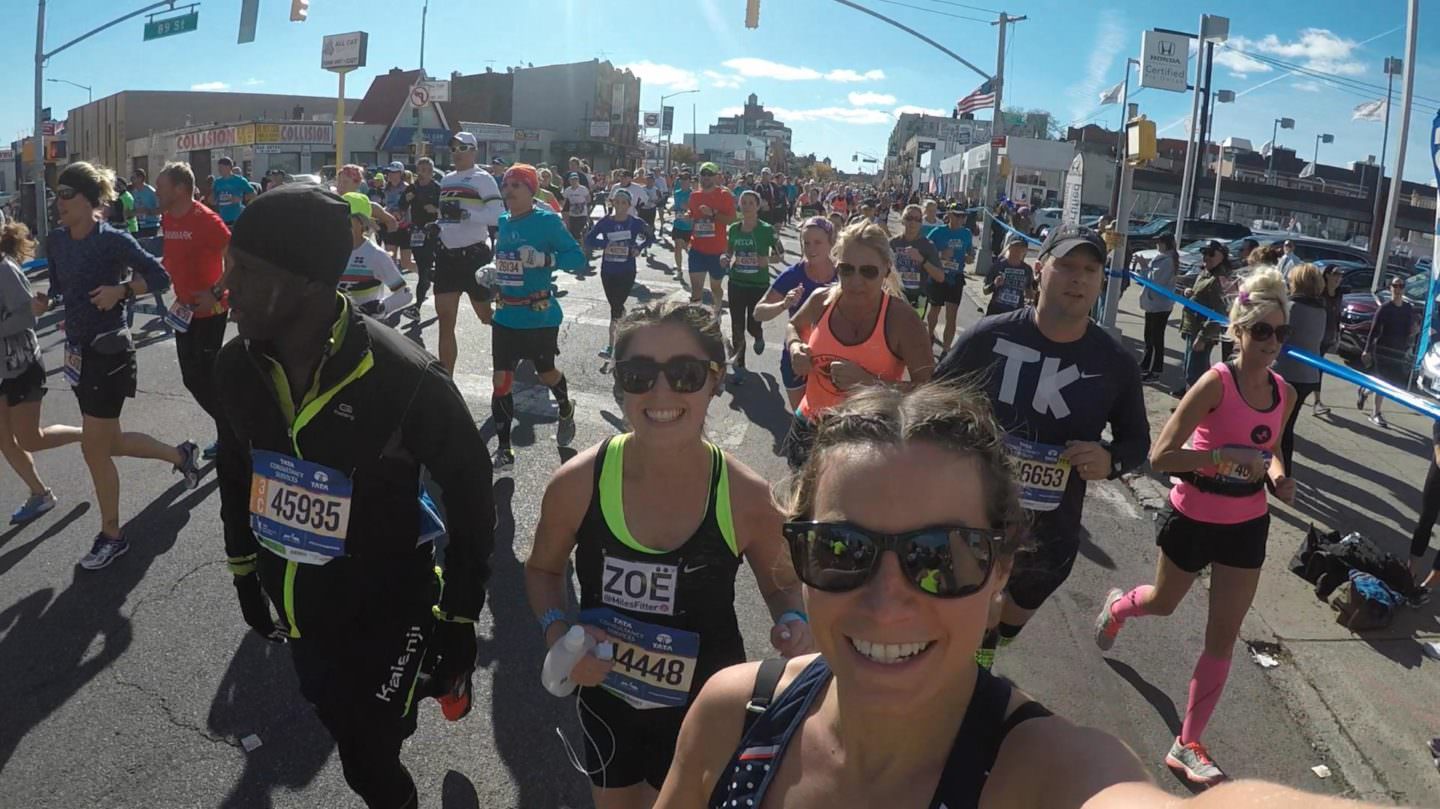 It felt hot out there before we’d even started, so we knew it was important to keep our pace right early on and to hydrate regularly. Both of us had opted for handheld water bottles that we’d refill at regular water stations along the way rather than attempting to drink out of the cups.

We kept a conservative pace on the way up the Verazzano bridge, around 10.30, although naturally this picked up on the mile downhill into Brooklyn. I always forget how massive Brooklyn is, and just how many miles of the marathon are spent running through it’s streets.

Our first spectator was Ashley at mile 7, so until then we focused on sticking to the middle of the road, hugging the blue line as close as possible and keeping the pace around 10.05. 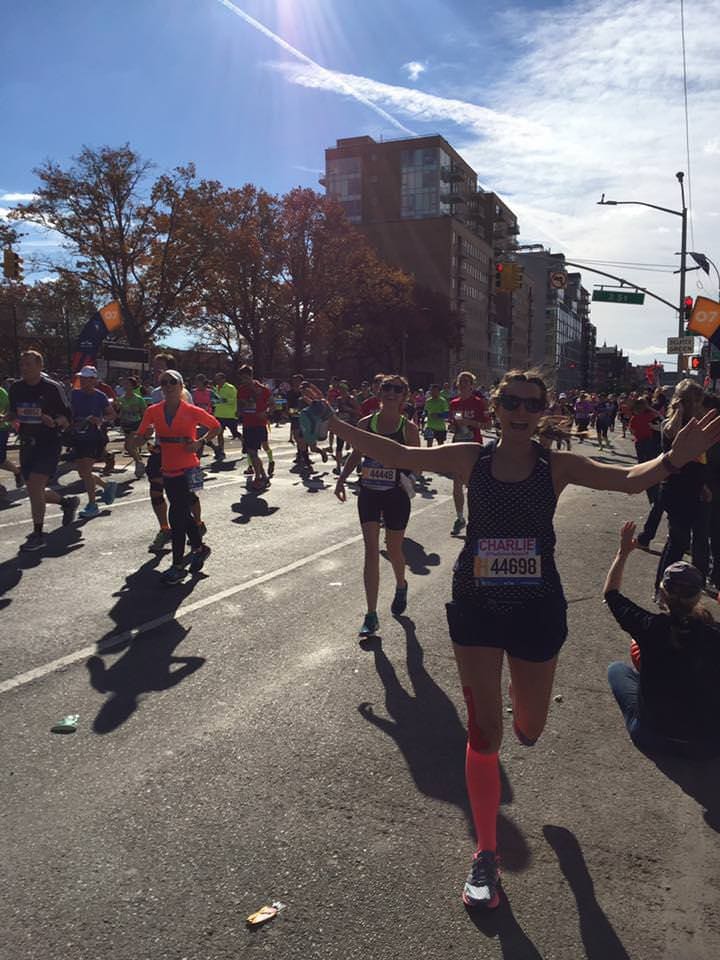 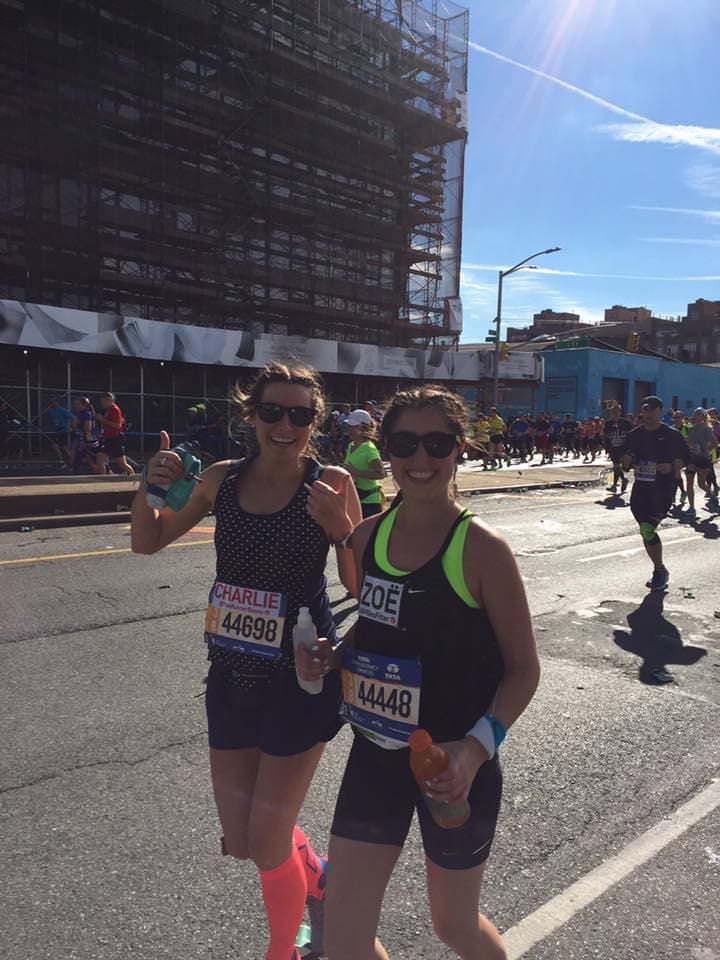 We definitely sped up a little too much with the excitement of seeing Ashley on the course, hugging, cheering and getting some pics together that we had to make a real effort to lower our heart rates and calm the F down afterwards.

We knew we’d be seeing Darren, Zoe’s boyfriend, and her two friends Holly and Kirsty just after mile 8 so focused on breathing easily and getting back into a rhythm.

It was really really crowded running through miles 8 and 9, with spectators surging onto the street narrowing the path for runners. It became quite claustrophobic and hard to keep pace with so many runners around us, and our mile 8 pace was around 10.30 – slower than we were hoping for. 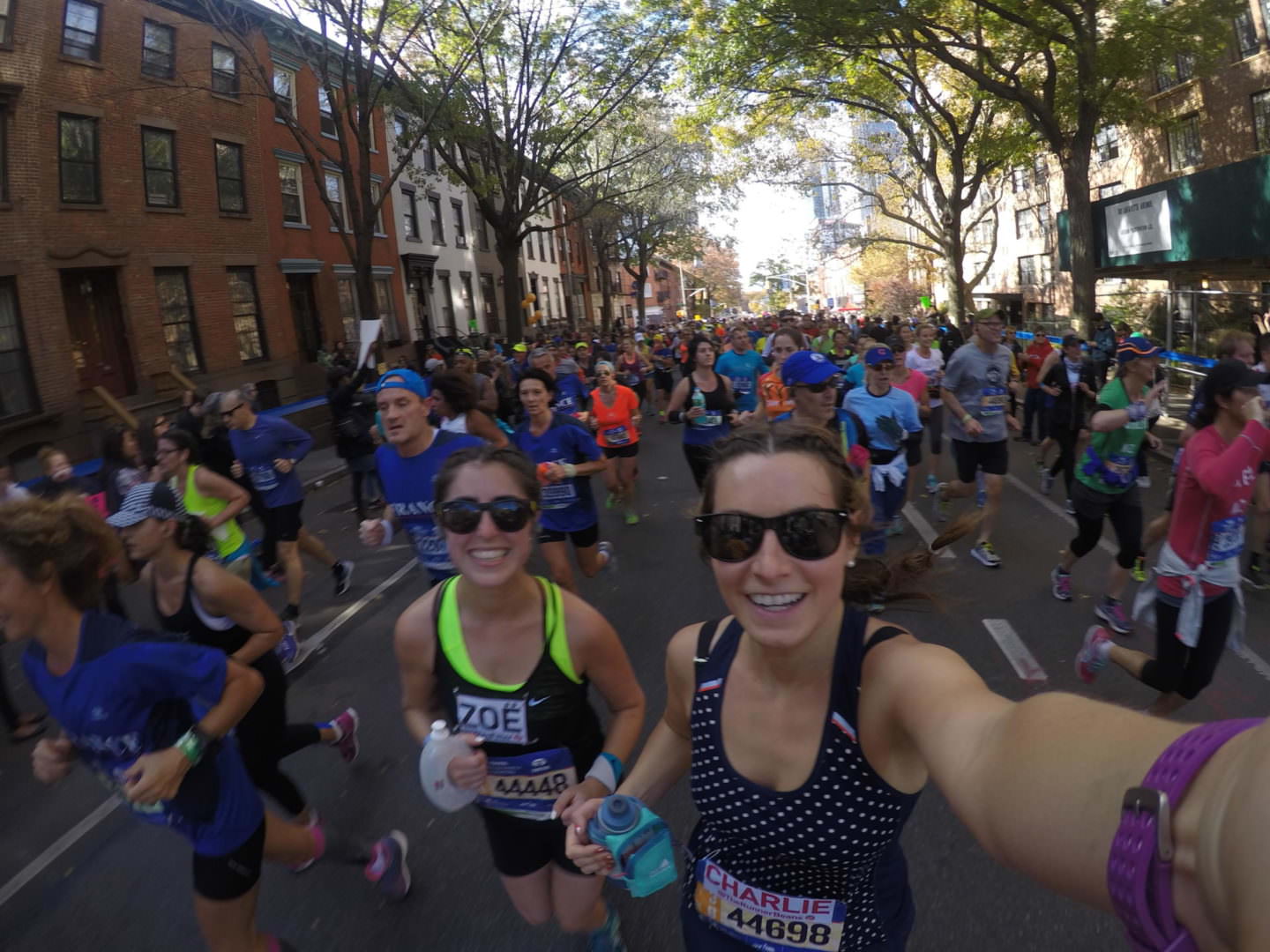 The rest of Brooklyn passed in a blur of french fry smells, November Project water stations, incredible supporters and amusing banners, and before we knew it, we were in Queens.

I honestly don’t remember much of Queens, those miles were a countdown to what we knew was ahead….Queensborough Bridge. There was also a little surprise bridge thrown in at mile 13 that neither of us had remembered and was not an enjoyable surprise. Running across it there was a runner on the floor, not in a good way, receiving medical attention and it brought things into perspective, we were still running strong and enjoying the race, and should count ourselves lucky to be in a good place. 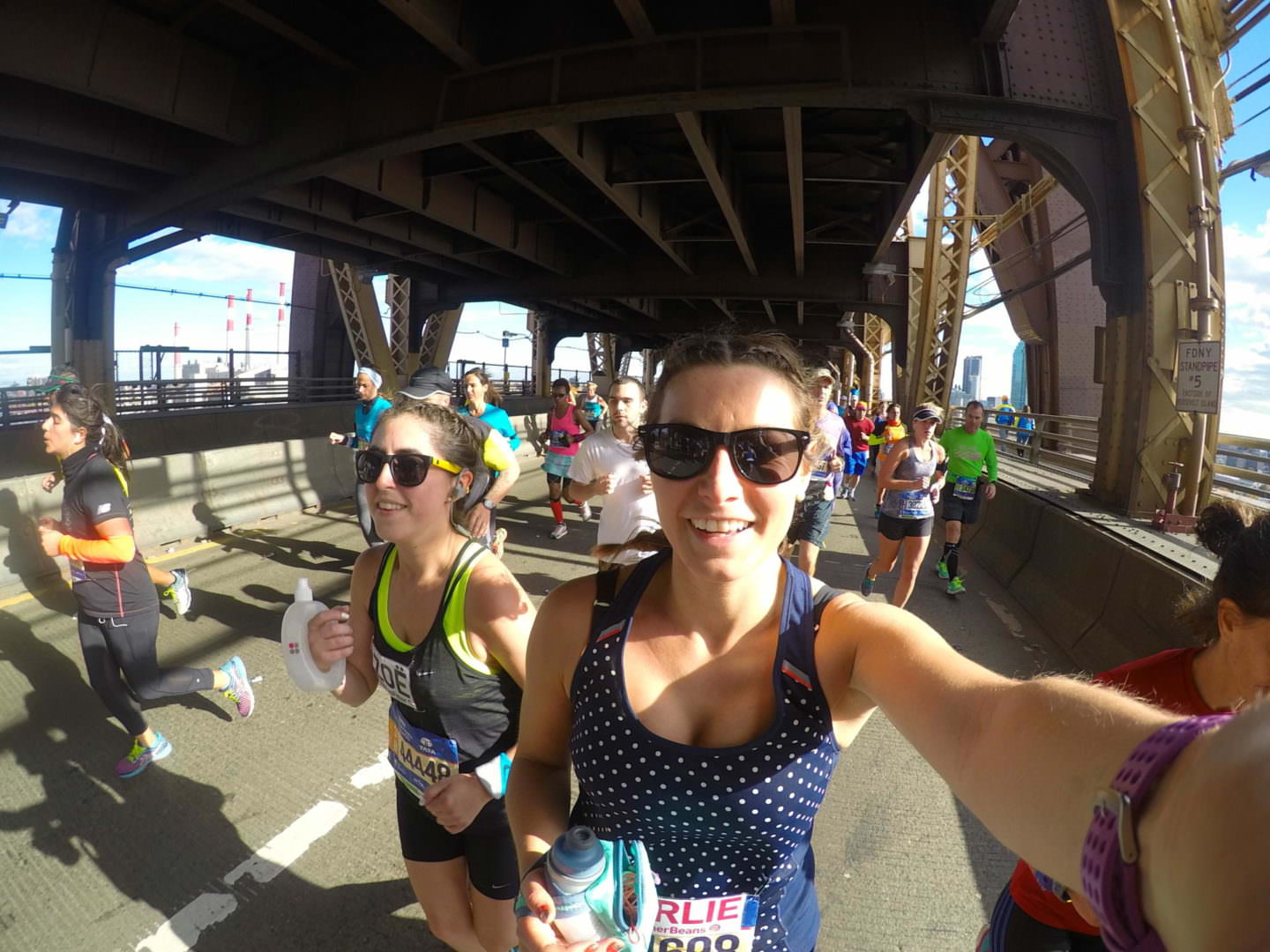 Zoe absolutely smashed it on the bridge, she’d run in five times in training runs and was ready to nail it – I just had to keep up. It was long but not too steep – the ‘wall of noise’ that will greet you on First Avenue definitely helps.

I’d expected our pace to naturally increase as we hit mile 17 and 18, and the crowds of Manhattan, but they didn’t. This was where we were supposed to be picking up speed, dropping down to a 9.50 – however this was easier said than done. Our actual split here was closer to 10.20, it was going to be a struggle to finish in our A goal time. 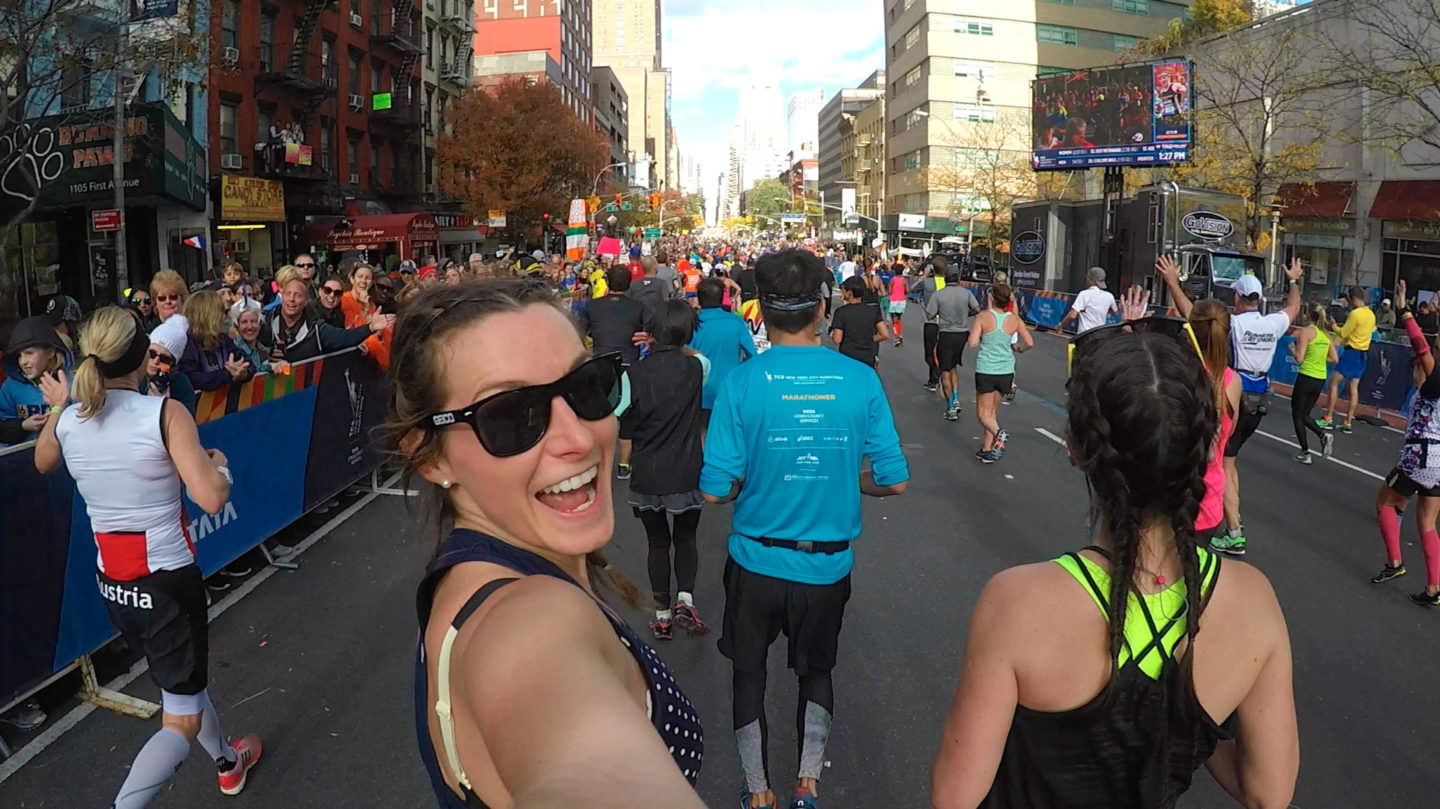 Last time Tom and his parents were waiting for high fives and support at mile 18, this time I didn’t have that but I did have an incredible playlist that Tom had made me for the race. It was a perfect lift of spirits just before entering The Bronx and hitting Mile 20. It was also great to see Megan and some of Zoe’s friends at this point. I also bumped into Gia on the course and gave her a big sweaty hug – somehow that mum of three manages to look glamourous at mile 20.5 during a marathon like it’s NBD. 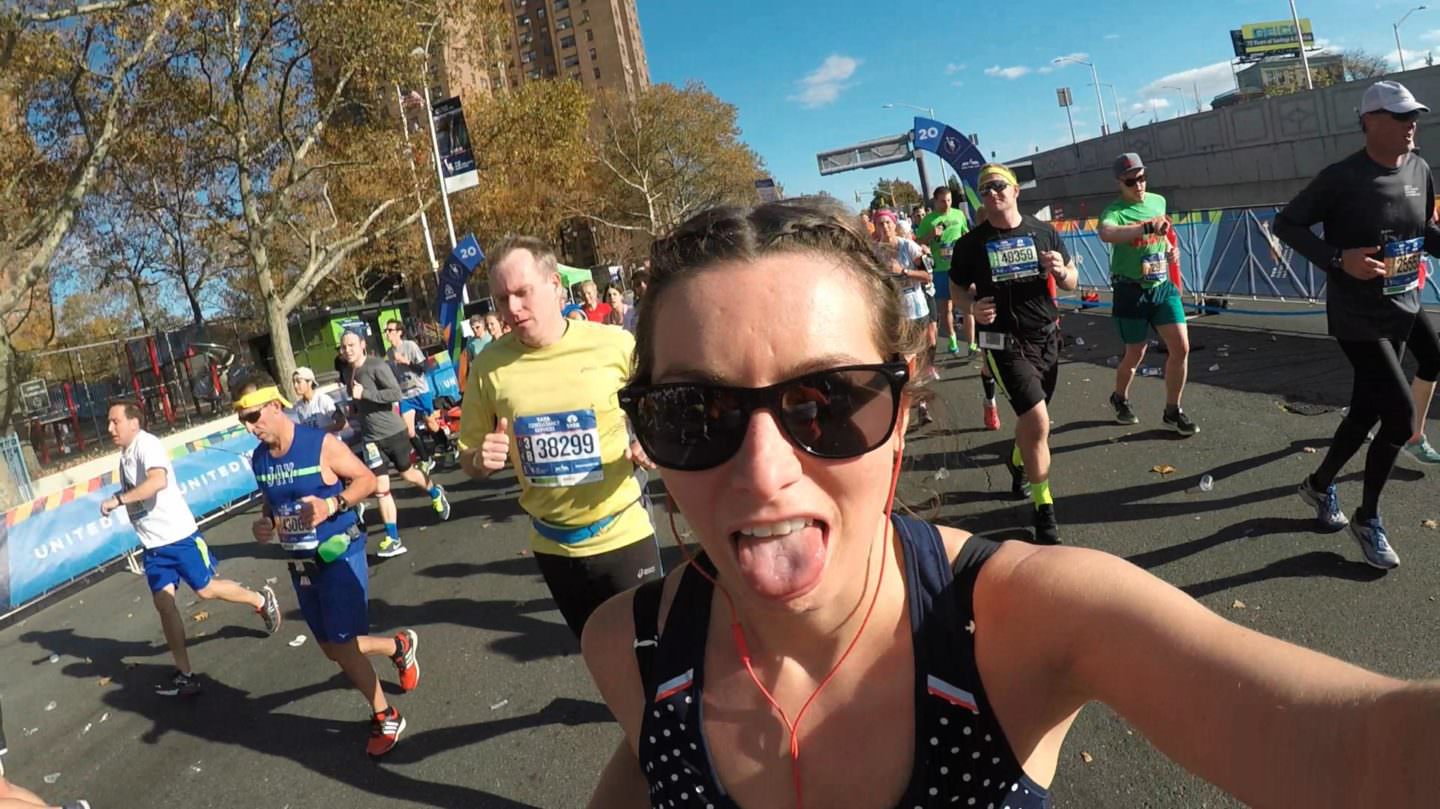 I was still feeling OKish at this point, and pleased not to have ‘hit the wall’ but my bladder was becoming increasingly uncomfortable. I was conscious that I needed to keep hydrating and fueling, especially as I was hungry and so definitely needed my Huma Gels (which I loved and am officially a convert to). I think I need to eat more pre-marathon next time!

By mile 21 it had become clear that we needed to run 9 min miles to reach our A goal. I had started to cramp and knew that I needed to wee, plus my knee had become a little crunchy, and with Tokyo marathon only 100 days away, I was scared to push it. I told Zoe to go for it, to push her pace and see what she had left… and I ran directly to the nearest bathroom.

Unfortunately the cramps did not subside and I logged my slowest miles during those last three. I made it up mile 23 and fifth avenue without walking, however I did have to walk a couple of times in the park, trying to stretch out my side. 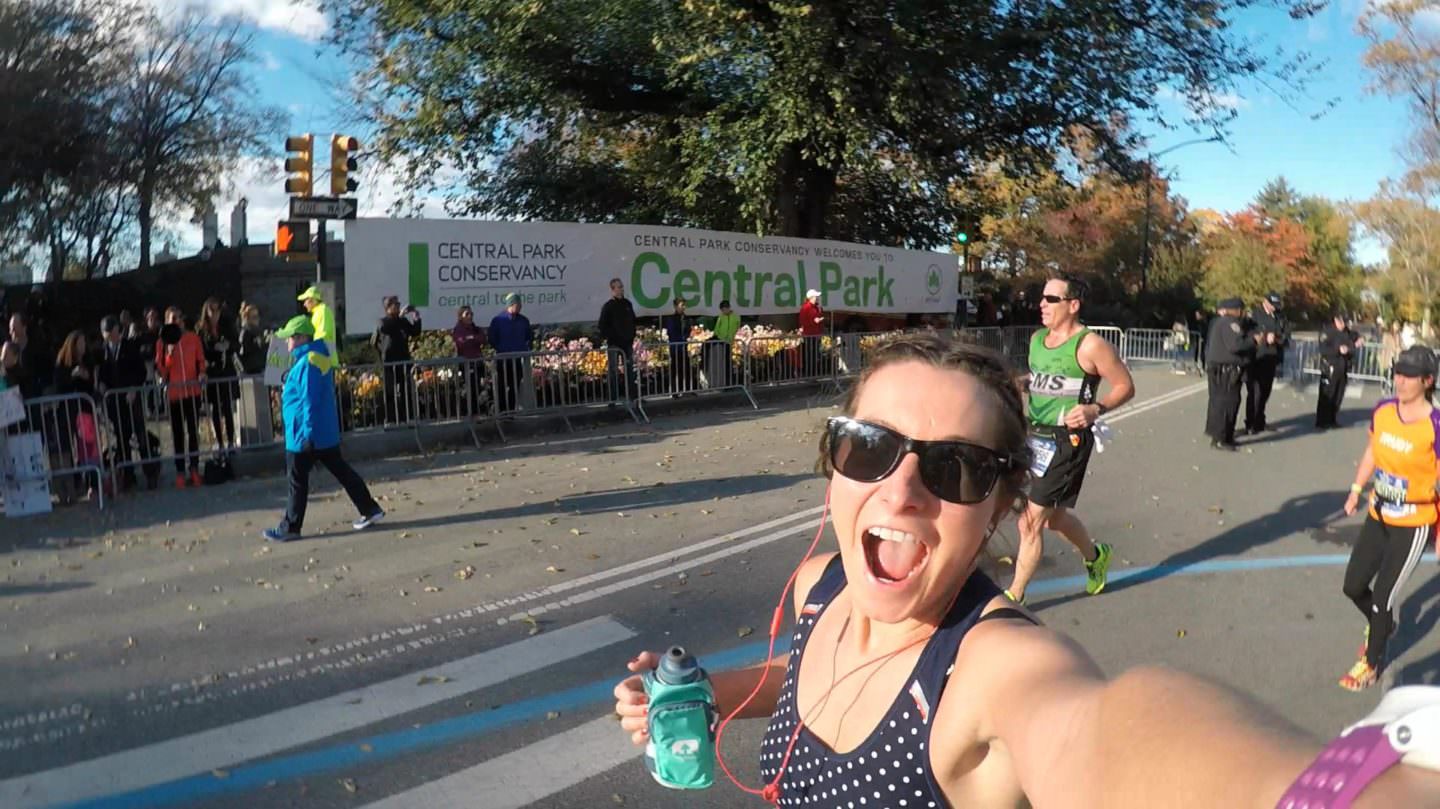 In 2013 I ran my heart out through those Central Park hills, but this time I just didn’t have it in me, mentally or physically. I was ready to be done. But I was determined to cross the finish line smiling…

and I did just that. 4.29.17 – my second slowest marathon but an incredible experience and a huge amount of fuel to the fire for Tokyo training. 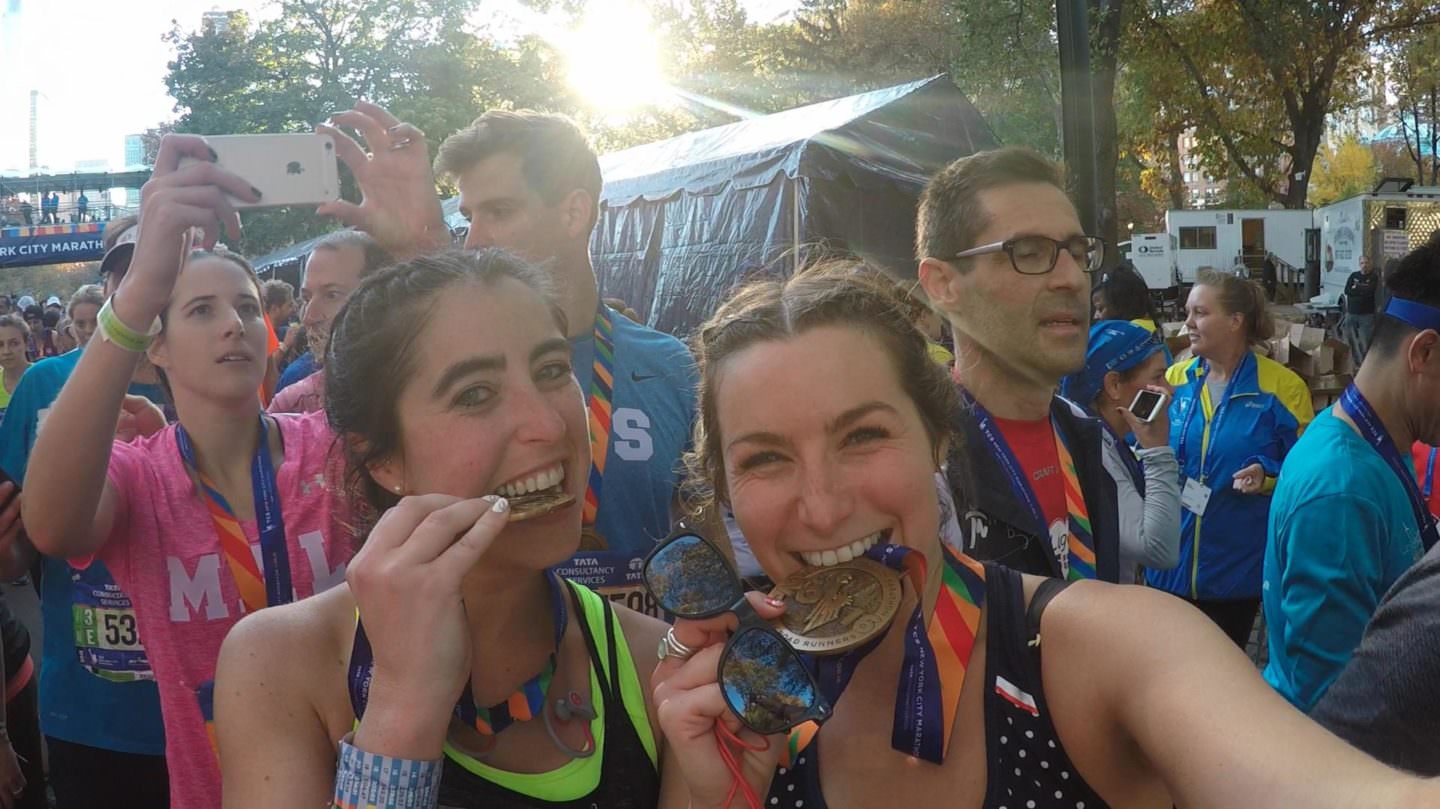 Watch my video from the race…