I am not the sort of person who would put the purchase of exercise clothes and shoes ahead of the purchase of ‘pretty’ clothes and shoes.
Actually, apparently I am.
It just so happened that I needed new trainers and black ballet pumps at the same time. How annoying. I didn’t think that I could buy both of them in one week so I decided to buy the one that I was wearing most. That turned out to be trainers, despite the hole in my ballet pumps that mean that when it rains my left foot gets wet. 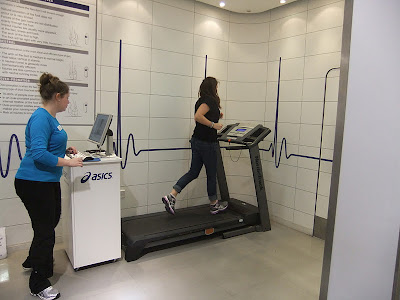 I went into Asics near my office to replace my beaten up Asics from last year. I was generally just after a replacement shoe, and so went in asking for a Neutral running shoe. I was asked if I wanted to run on the treadmill for them to assess my running style and see which shoes would be best for me- as it was included in the price of the trainers I jumped at the chance 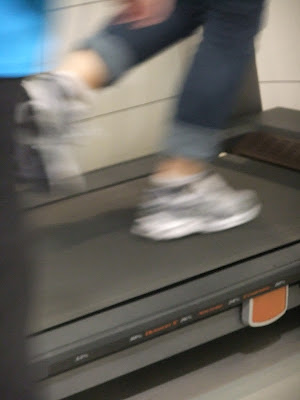 I didn’t want to embarrass myself by getting out of breath (I didn’t know how many trainers I was going to be trying on and therefore how far I was going to have to run in my jeans and jacket!) so I ran at level 8. They recorded my feet as they hit the treadmill which I then got to watch back. It was pretty obvious that my feet were pronating or turning in. 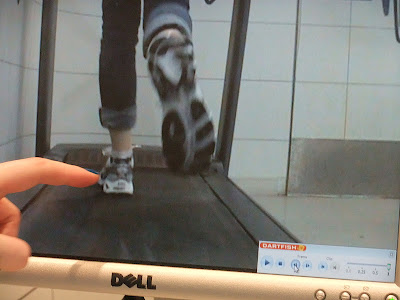 I then tried on trainers with some support which made the pronating better but not completely. You are aiming for your feet to stay flat on the treadmill. At first my left foot was really pronating but this corrected pretty quickly with the support trainers, however it then seemed that my right foot was pronating badly too. I had to increase the amount of support a couple of times before there was a good match. I ended up getting the GT-2160, great road trainers that are really light.  And guess what…they are pink! 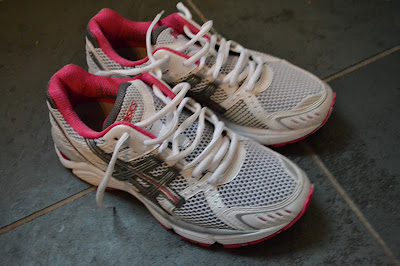 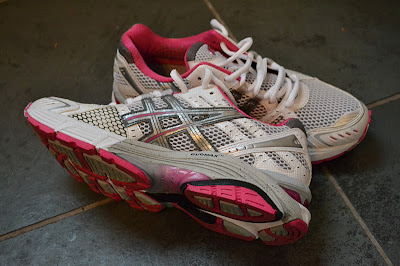 I was so pleased that these were the ones that felt comfortable and did a good job supporting my foot and ankle, and that they are pretty(ish). Some of the trainers that I tried on before these were pretty ugly, but I didn’t want to say anything incase they didn’t take me seriously! I’m hoping that these new supportive trainers will improve my runs, and help to keep me injury free. I can’t believe I was told last year that I was neutral and this year I have had to have the second most supportive shoes! I really recommend going to a proper running shop to have your shoes fitted, especially if you are going to be spending a lot of time wearing them (training for the marathon means a lot of time pounding the pavements!) I certainly will again in the future. 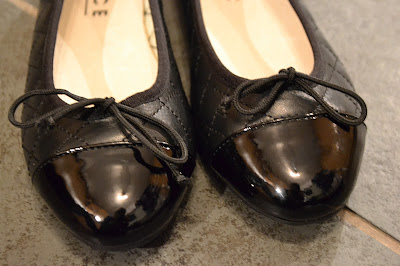 On Tuesday before Yoga I met my Mum at Westfield and finally bought some new black ballet pumps- I literally got the same ones as last time. Thanks Mum for using your Westfield voucher on me!!
I tried out my new trainers on Tuesday morning for a 2 mile run, they felt a little weird to start with but I’m hoping that I’ll get used to them. I thought that I would run at slow and steady without worrying about what pace I was going. I was pleasantly surprised when I checked the Garmin at the end of my run to discover that not only had I run my 2 miles in under 20 mins ( I thought I was going pretty slow, maybe my trainers are magic?!) but I also ran negative splits without even trying. Ok so 9.56 and 9.45 aren’t exactly great splits but you have to start somewhere, right! 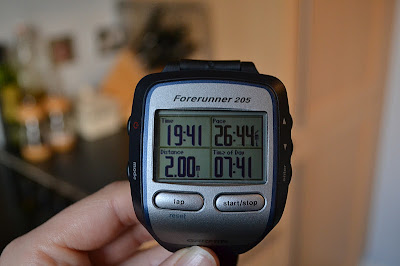 I ran another 2 miles this morning, but without my Garmin- satellites were completely confuddled this morning and I was not going to wait 10 minutes for the Garmin to wake up when I was awake at 6.45. Going on a 3.1m practice run on Friday in preparation for my first ever 5k on Sunday!!