Lunch at The Fat Duck has been on my bucket list since I wrote my first list years ago. While writing an article on ‘How to Get a Table at a Top Restaurant’ for Good Housekeeping, I thought I’d try my luck using the very processes I was writing about and see how I got on. As luck would have it I managed to secure a table for four of us for lunch

When you first arrive you are presented with an enormous tome, bound in leather which is in fact, the wine list. It can be slightly overwhelming with wine tasting menus ranging from £150-500 per head, and not too many bottles of vino on the cheaper end of the scale. We opted to start with some champers, telling ourselves that we would probably only be eating here once and we wanted to make the most of it. 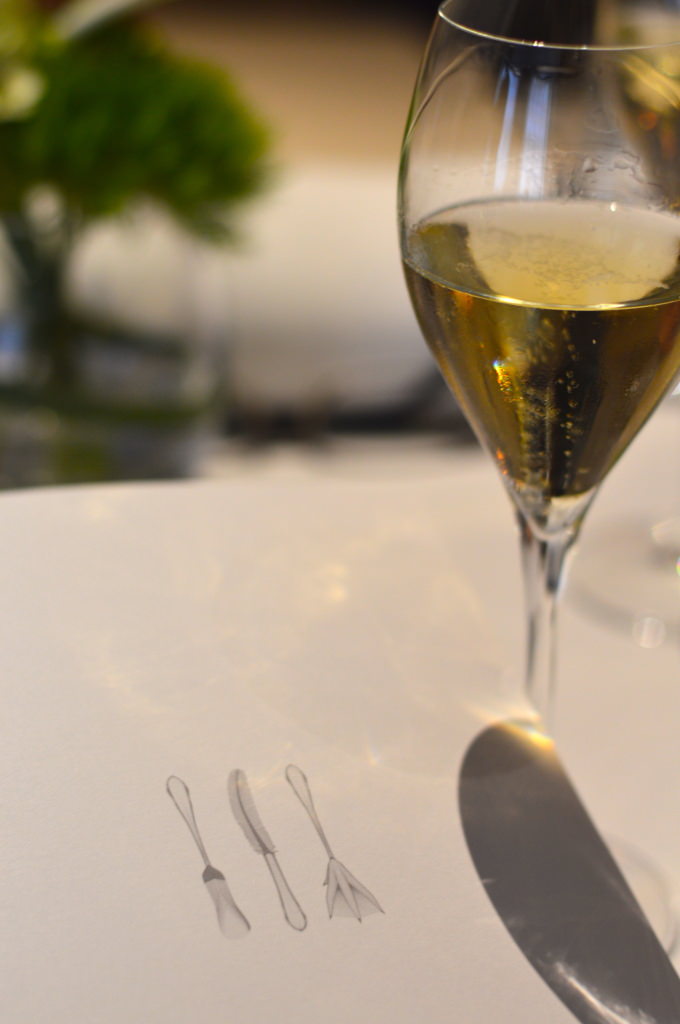 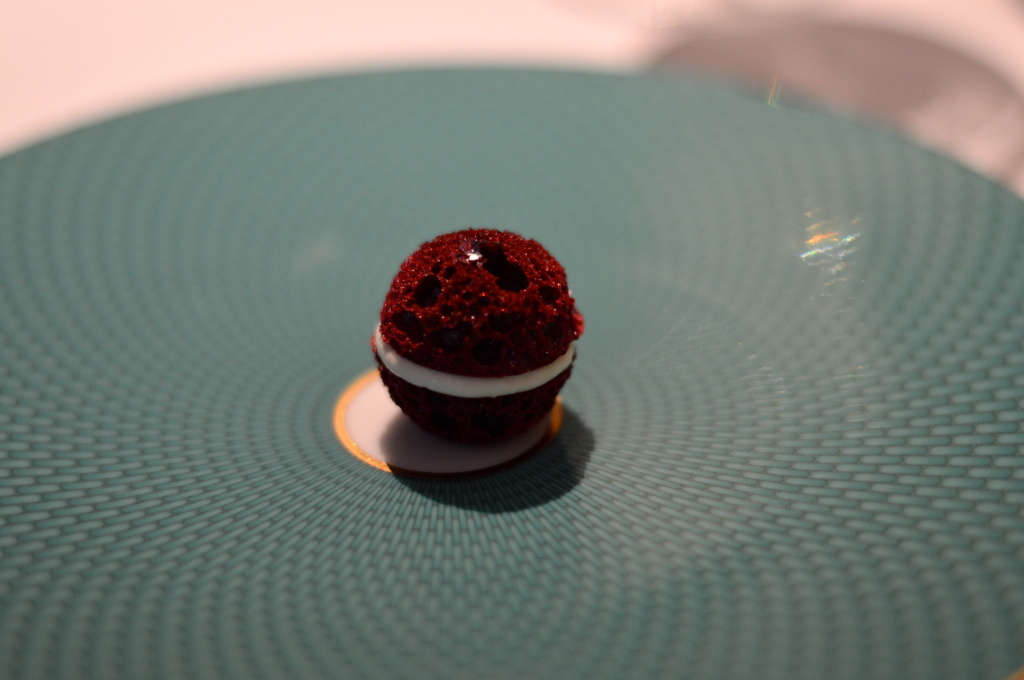 First up was an amuse bouche of aerated beetroot with a horseradish cream. We were told to eat it quickly and all in one go.  It had a wonderful biscuity earthy taste and texture, despite looking a little like a cake pop.

Next on the menu were Nitro Poached Aperitifs, with the option of Vodka and Lime Sour, Gin and Tonic or Tequila and Grapefruit. I think you can probably guess which I went for- G&T obviously. A waiter came to the table , and using liquid nitrogen, made mini savoury alcoholic meringues. They were designed to stimulate the appetite (much needed before 14 courses) and cleanse the palate. 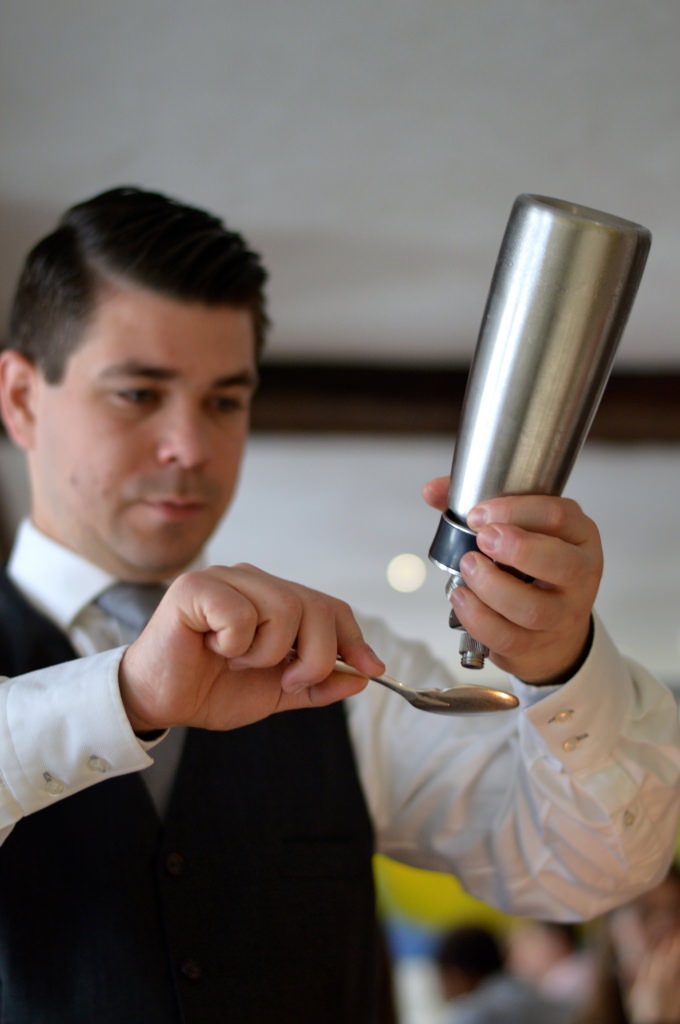 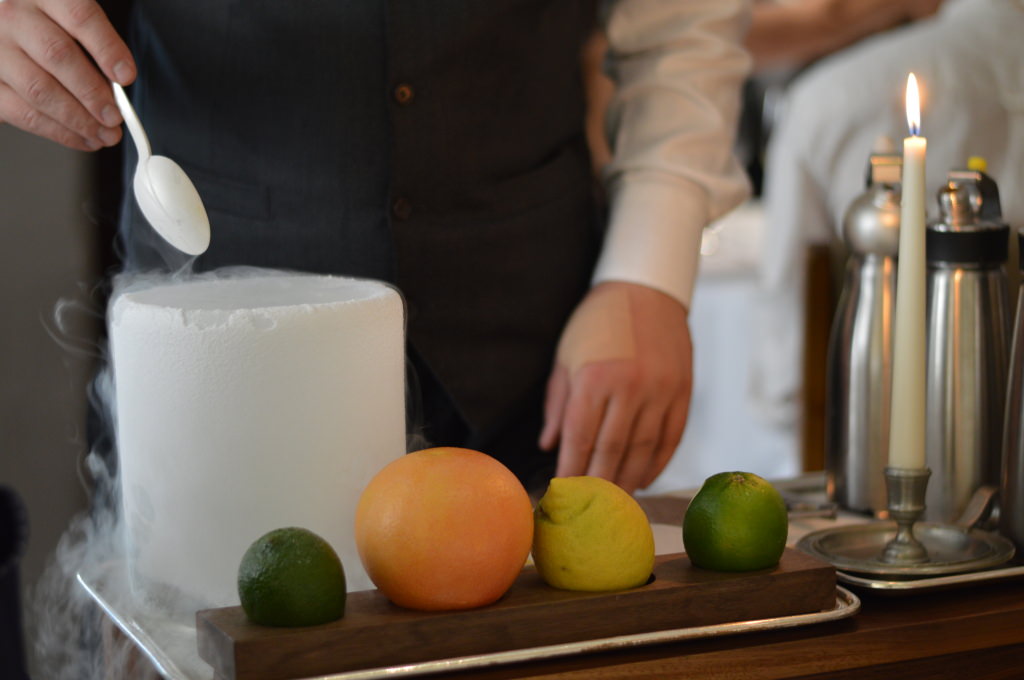 Course 3 was a Red Cabbage Gazpacho with Pommery Grain Mustard Ice-cream poured for you at the table. It worked as a brilliant palate cleanser, with the slightly bitter flavour of the red cabbage. The gazpacho was impossibly smooth, with a little texture added from the wholegrain mustard balls in the ice-cream. A little weird, but very delicious. 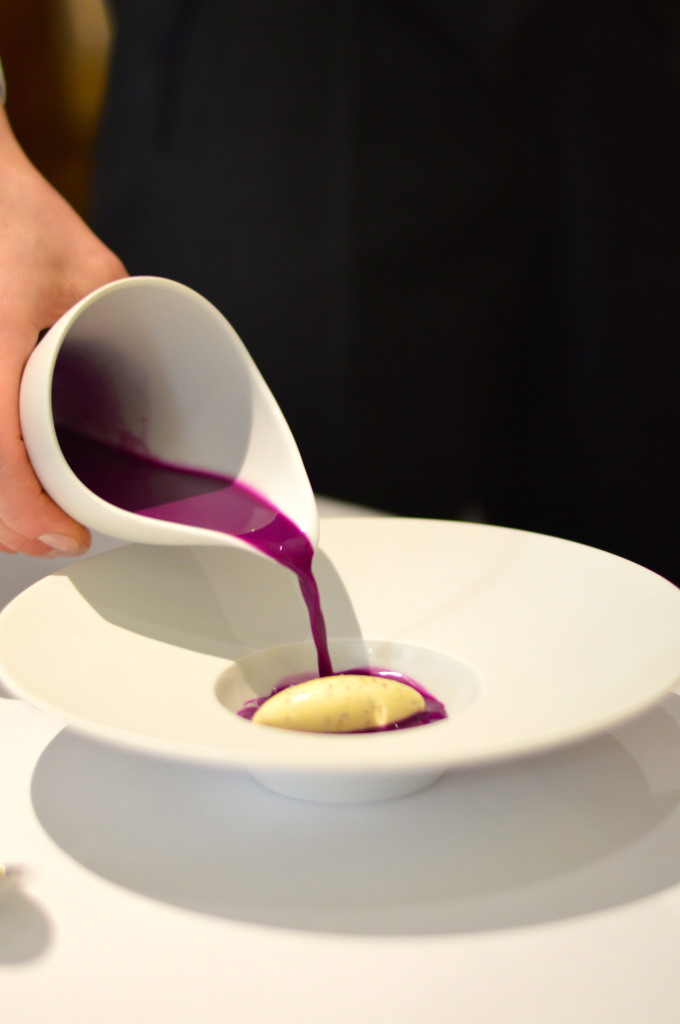 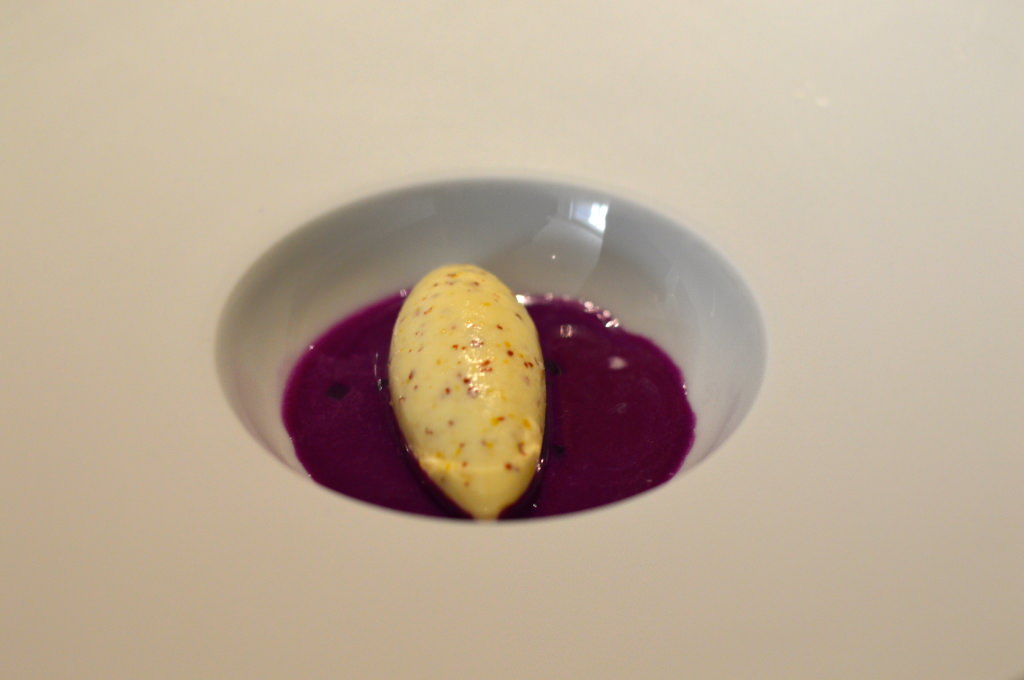 Number 4 was one of my favourite courses of the day; Jelly of Quail and Crayfish Cream, with chicken liver parfait, Oak moss and truffle toast. We began by placing a small piece of film on our tongue that dissolved leaving had an oaky taste, before our table was transformed into a dry ice forrest, enhancing the olfactory senses with the smell of the forrest apparently so that you could imagine yourself hunting for truffles. 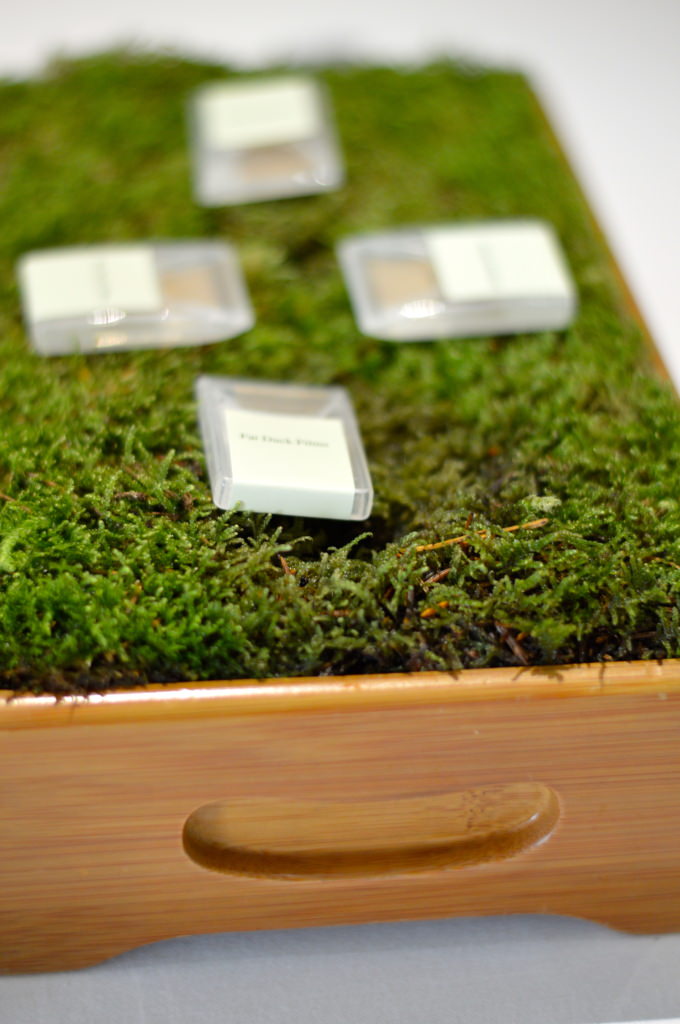 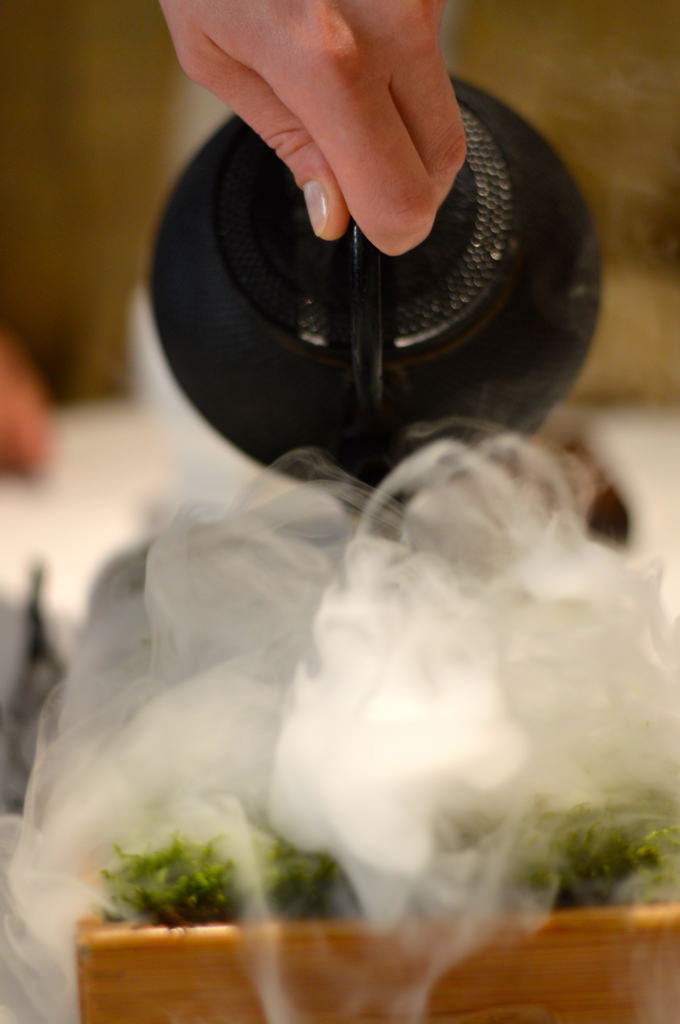 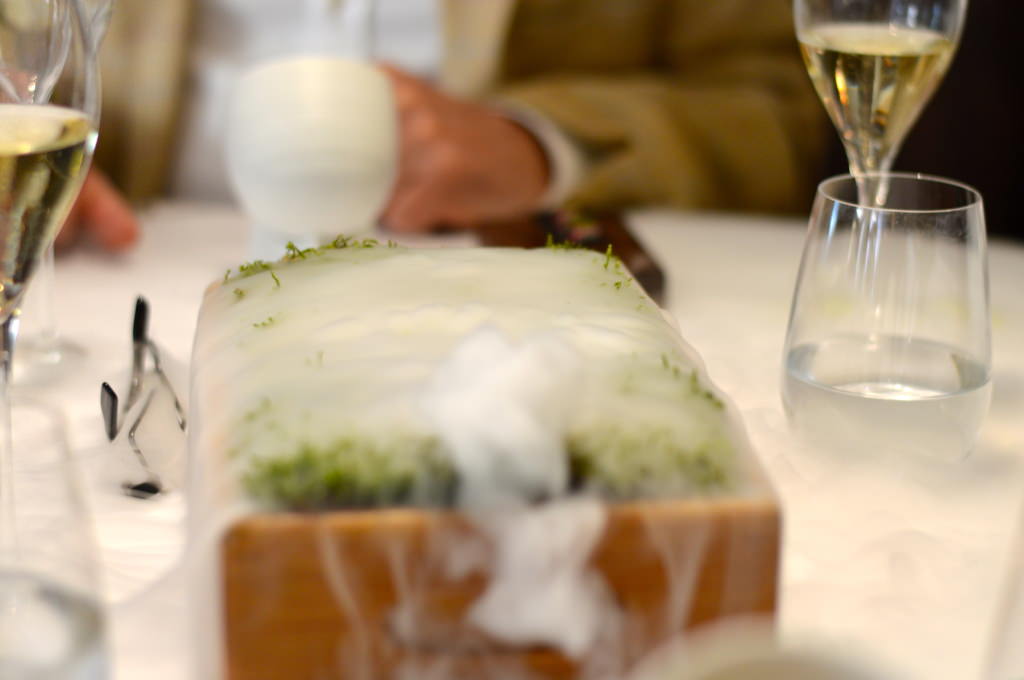 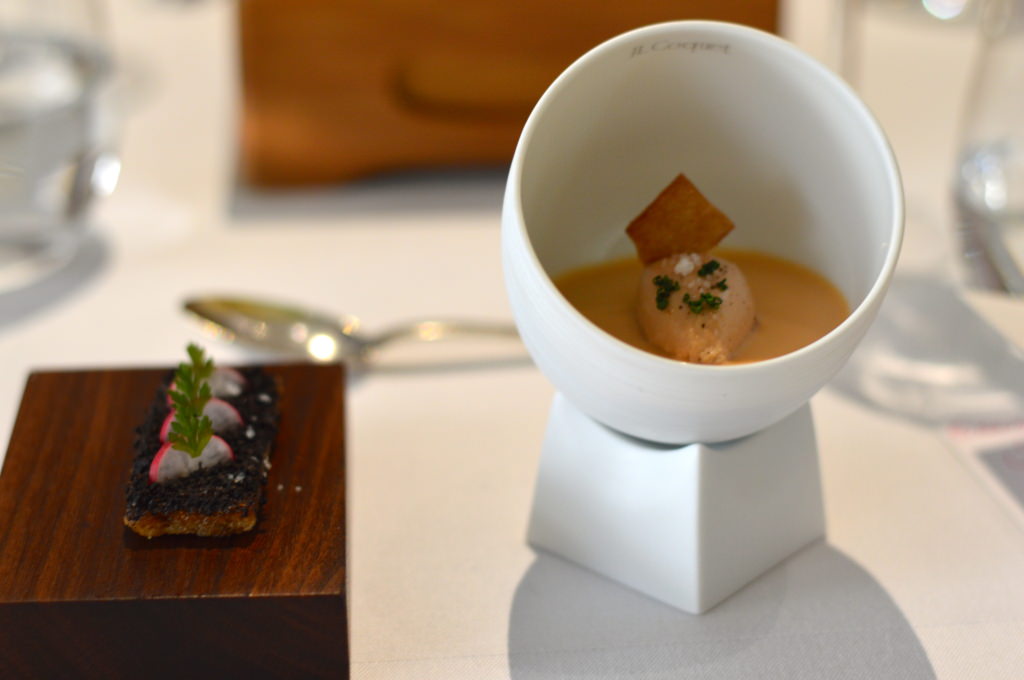 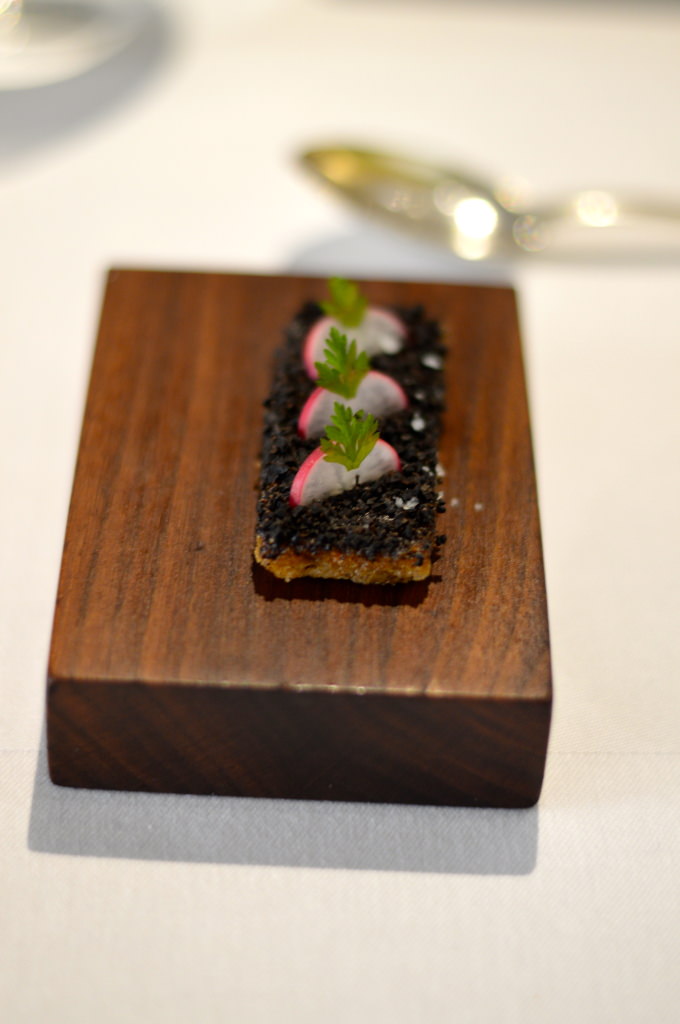 A basket of fresh bread, and rolled, salty butter was passed around, and despite the upcoming feast, we all tucked in. I had actually finished my fresh white slice completely when the waitress returned to offer me another, ‘because the bread was meant to be enjoyed with the next two courses’. Whoops.

Snail porridge- a dish I’d heard a lot about and was secretly dreading. It was green, their were obvious whole snails lurking within the creamy oats, and it was topped with fennel (one veg that I’m not overly fond of). It wasn’t my favourite, but it did intrigue me. The sweet and salty balance in the dish was spot on, and the fennel served the purpose of lightening the taste. Not one I would have ordered, but I enjoyed it nonetheless. 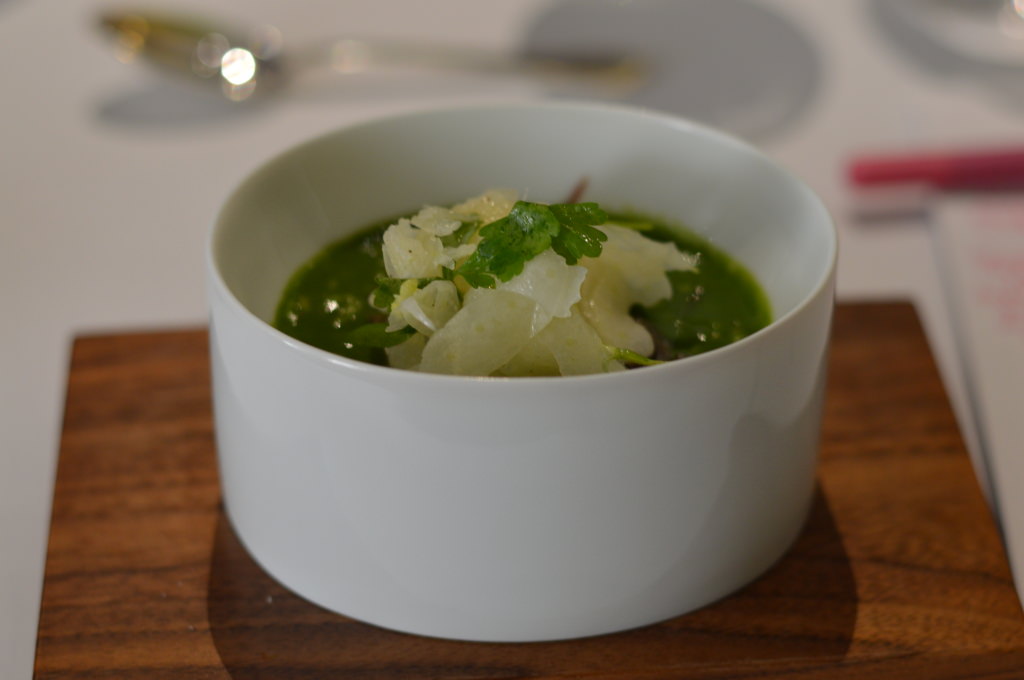 Roast Foie Gras with barberry, confit kombu and crab biscuit. This strange combination of textures wasn’t to everyones liking, but I loved the sweetness of the meat off set with the crunchy salty biscuit. 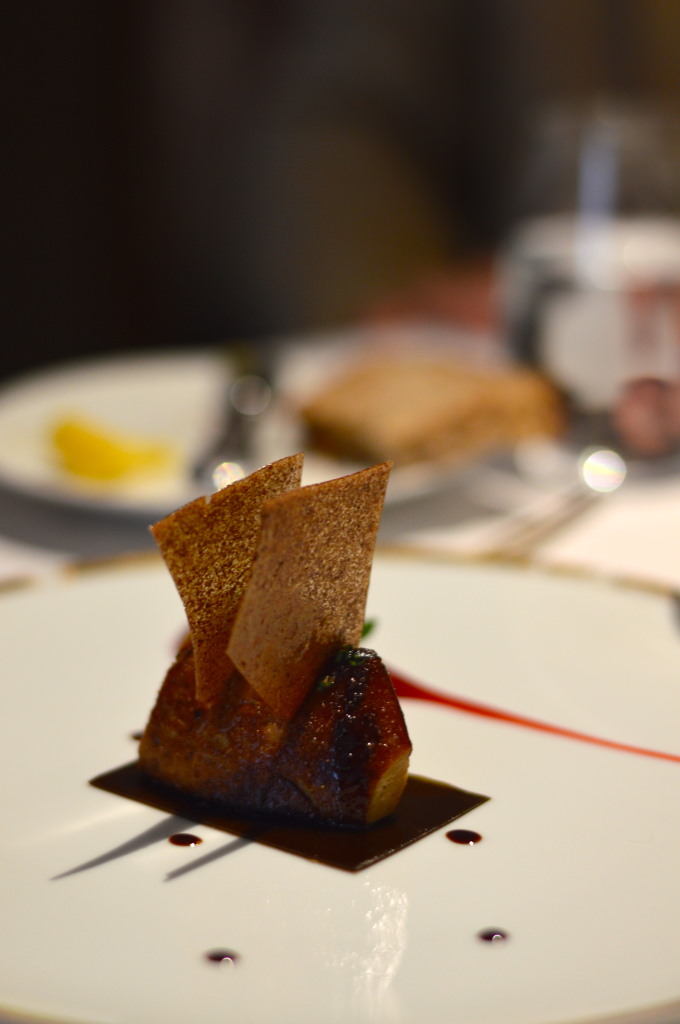 The Mad Hatter’s Tea Party- if you watched Heston’s shows a few years ago, you would have seen this one featured as an impressive spread. With Mock Turtle soup created from a gold leaf encased stock ‘watch’ swirled in hot water, and poured over an egg laced with mini morelles, celery and ham (I think!). Served alongside toast sandwiches- we loved the layer of toasted bread within the sandwich and thought this little trick could quite easily be made at home. This course was pure fun! 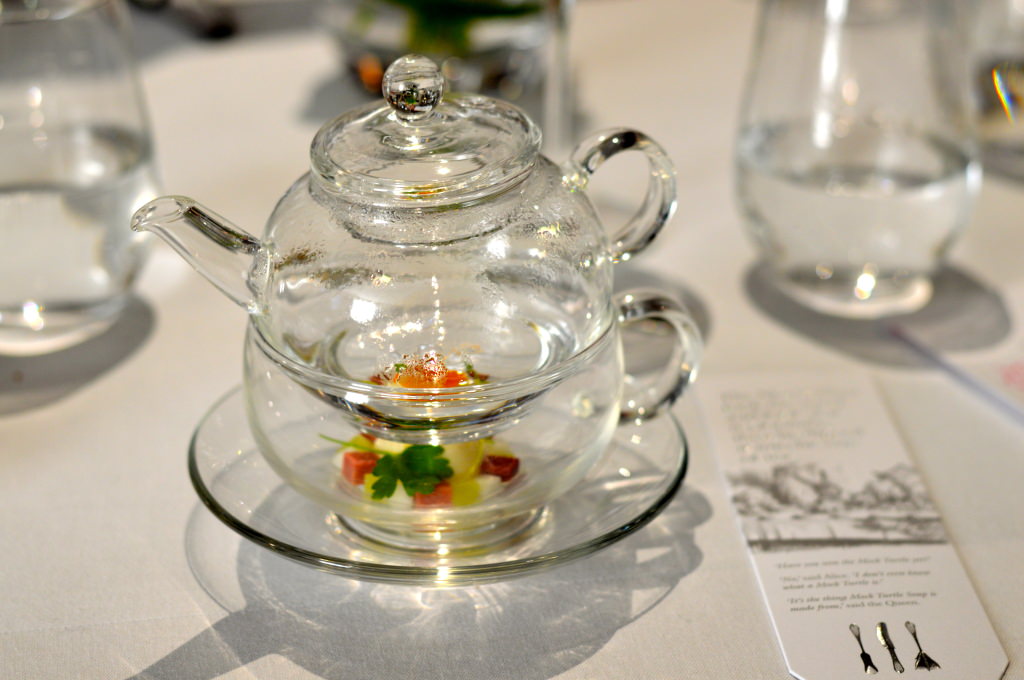 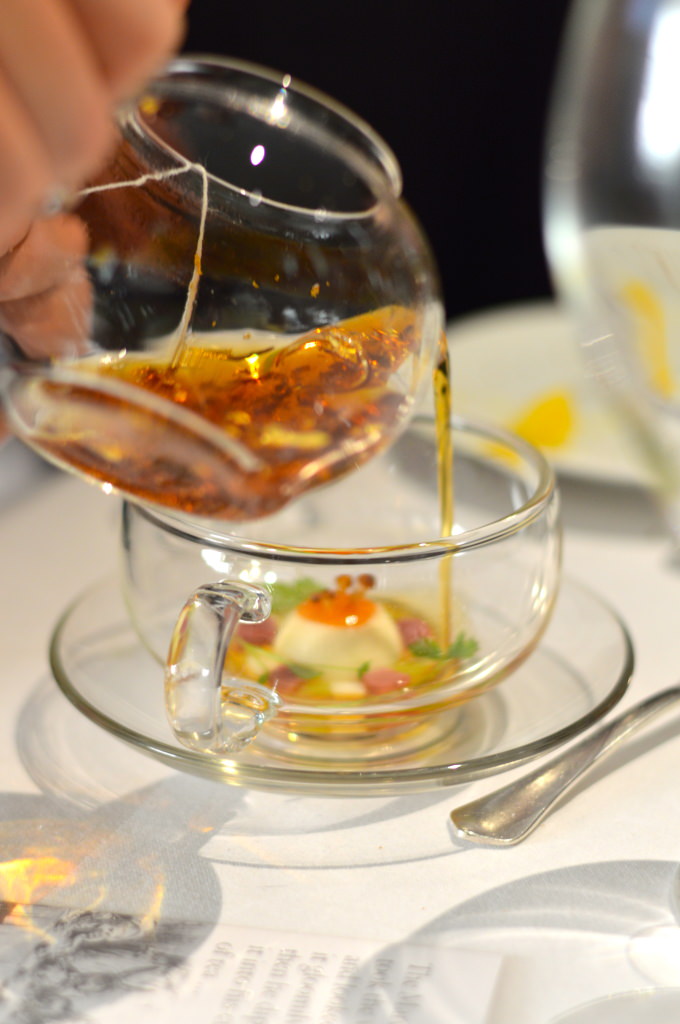 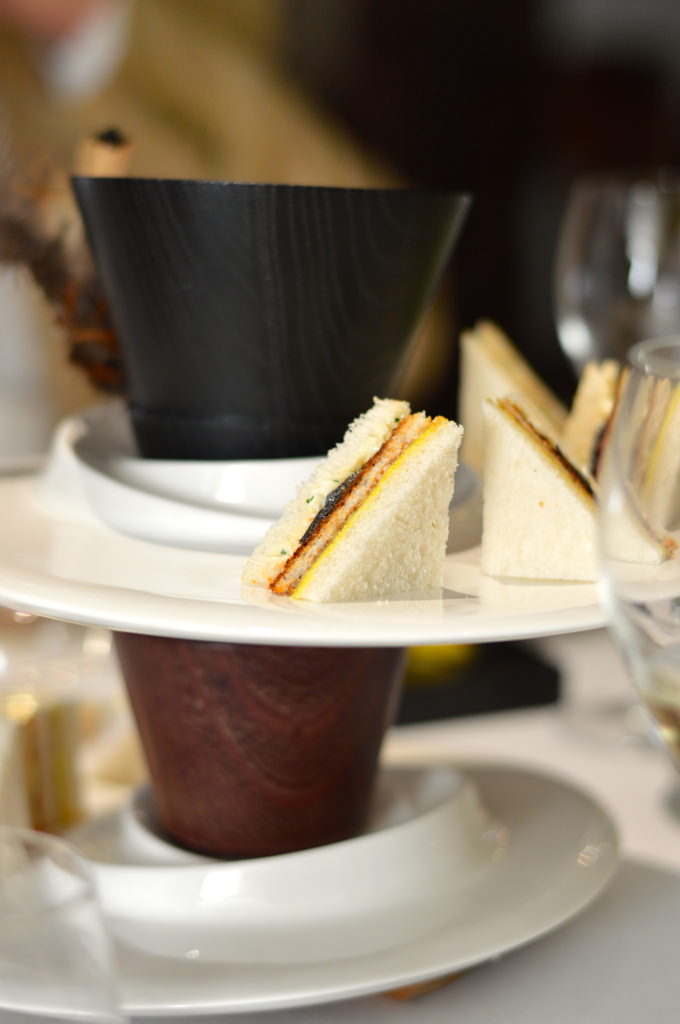 Halfway through came a course I’d also heard a lot about- The Sound of the Sea, where you’re given a shell containing an iPod shuffle that plays the sound of waves lapping, seagulls crying and the howl of the sea air. You’re instructed to listen to this whilst tucking into a plate of the sea, featuring sand (tapioca starch combined with fried finely chopped sardines), cured yellowtail kingfish, octopus and cured mackerel, alongside seaweed and samphire. The presentation was impeccable. 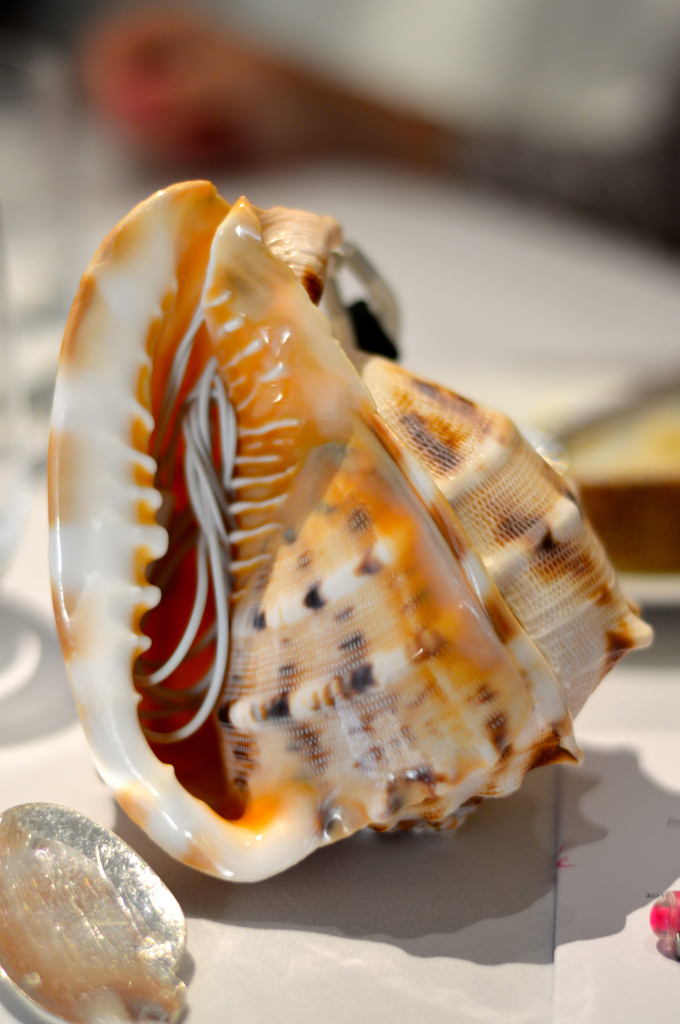 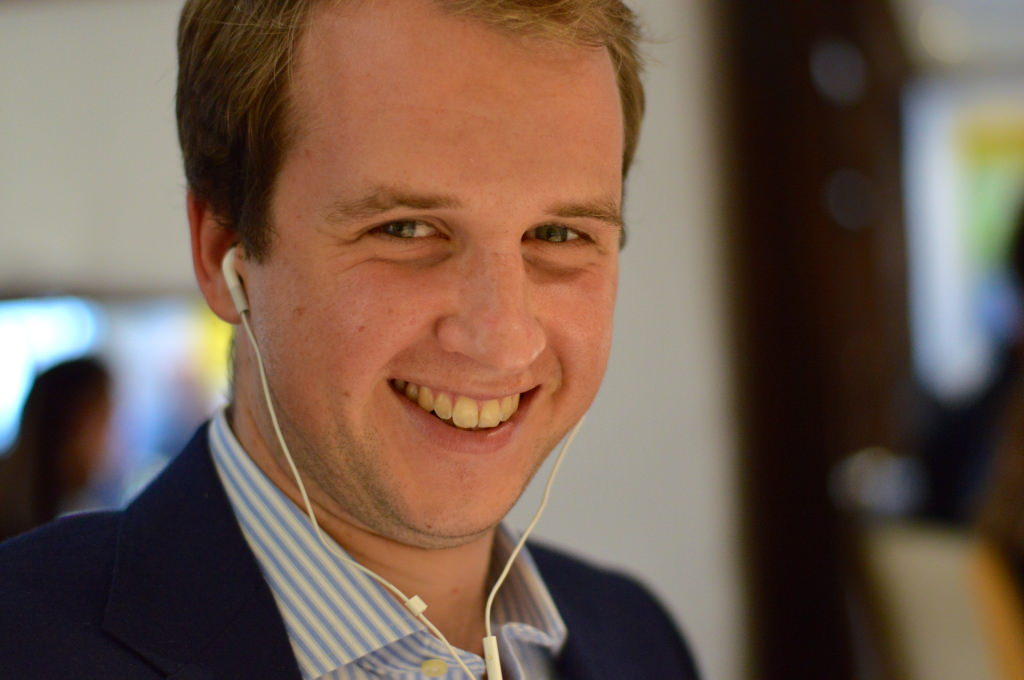 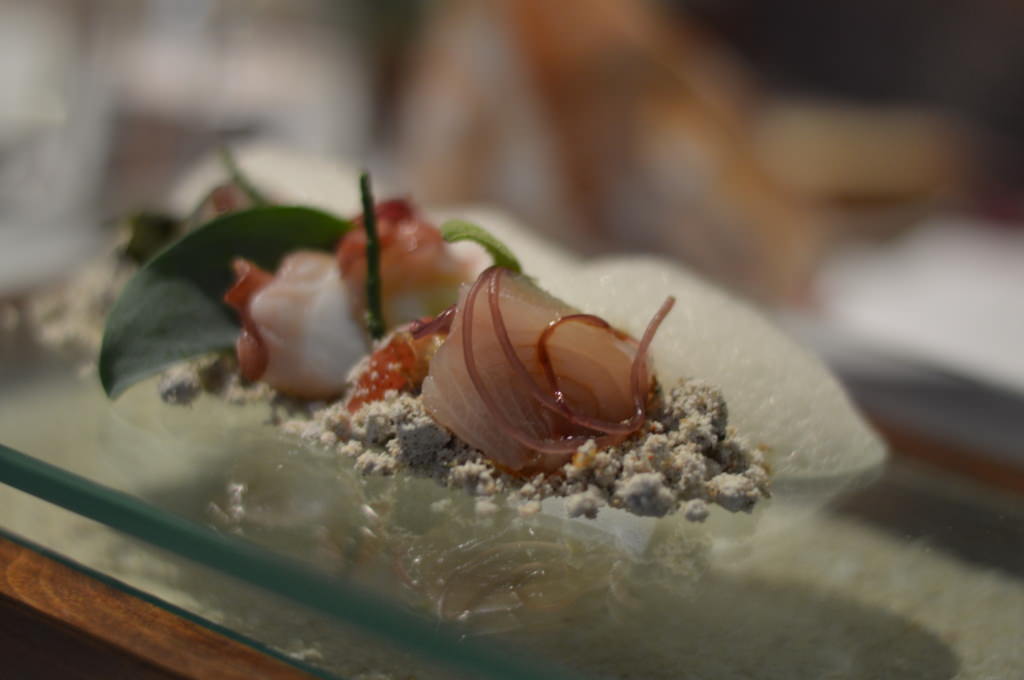 I thought I might not enjoy the Salmon Poached in Liquorice Gel as I am not a fan of liquorice and aniseed flavours, however this sweet dish turned out to be one of the most enjoyable. Served alongside vanilla mayonnaise, with artichoke and golden trout roe and grapefruit pieces. I’d love to try to recreate a easier version of this dish at home! 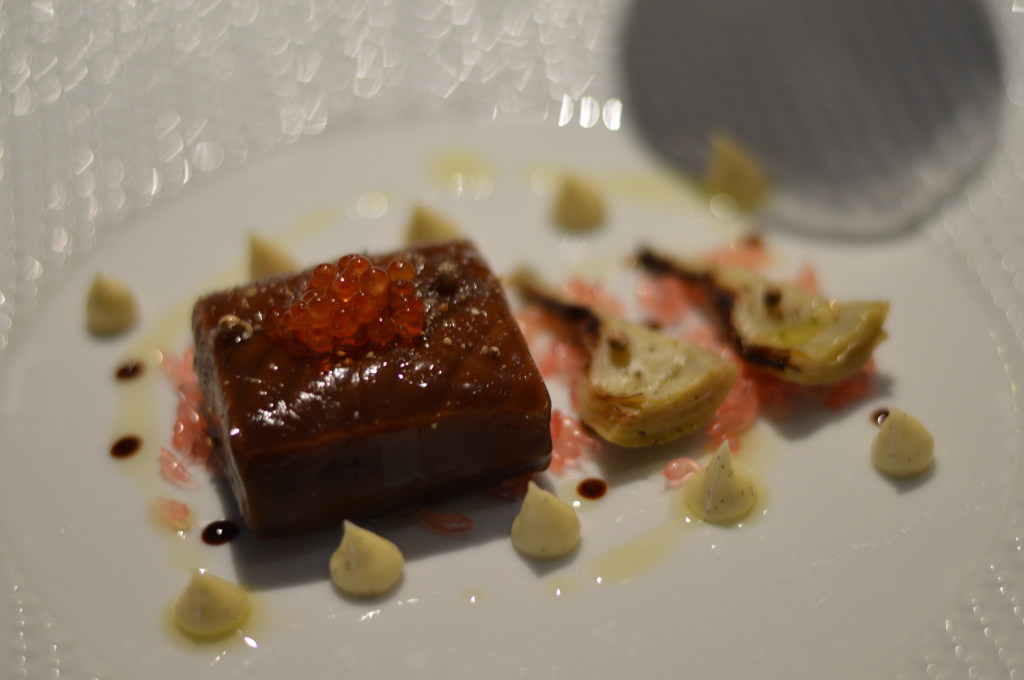 We’d all been looking forward to a bit of ‘Umble Pie’- venison served alongside kale (or cabbage- whoops, can’t remember) and parsnips, with a spelt truffle risotto. Very rich, very indulgent but wonderful and warming. This felt like the true main course. I could have easily eaten more of this dish. 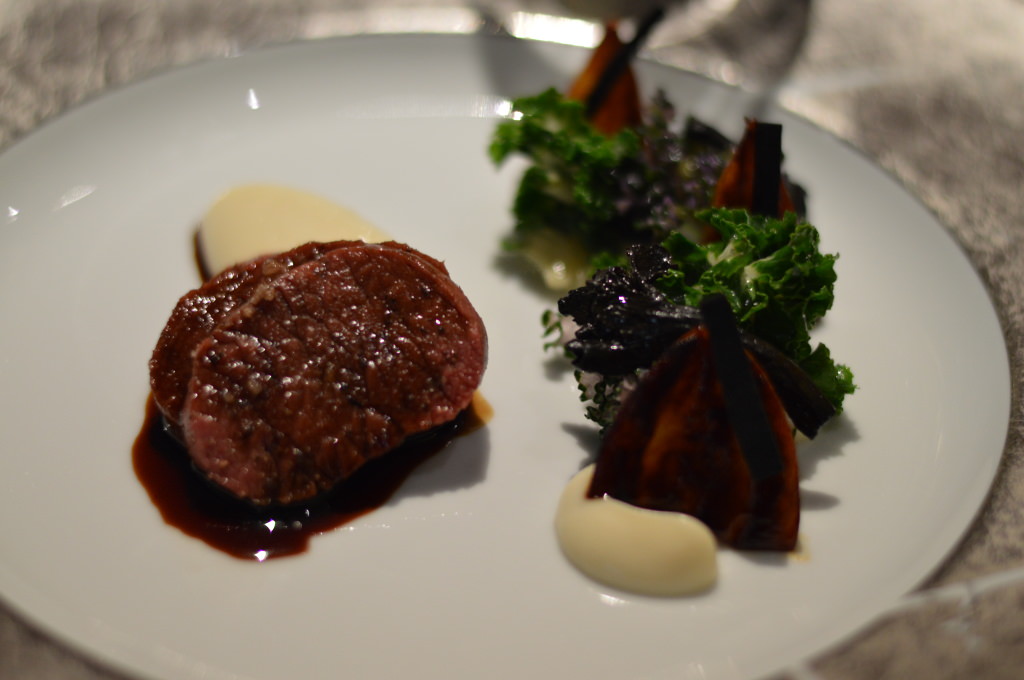 This bizarre drink was hot on one side, cold on the other, and after receiving instructions not to move/turn the cup, we tucked in. It was a rather odd sensation having one cold and one hot side of your mouth, but this Hot and Iced Tea was a treat, and a fab start of the sweet courses. 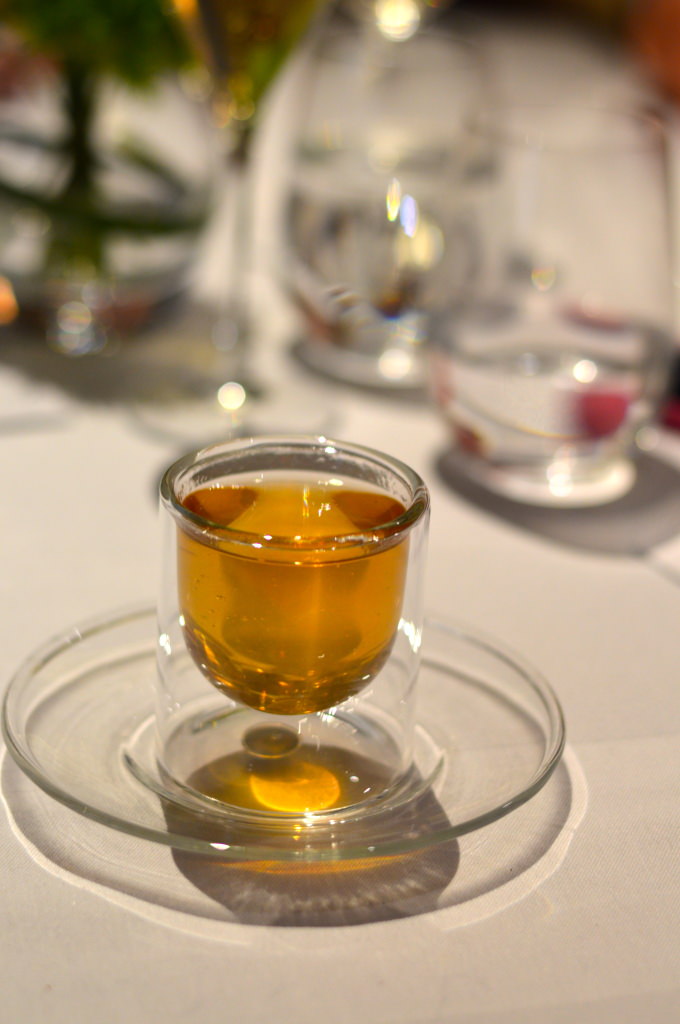 The most incredible sweet course came out first, what looked like a whole egg, nestled on a bed of straw, turned out to be a white chocolate egg shell, with a lemon citrus poached egg within, sitting on sugar strands, creating a crunchy, soft, sweety gooey pudding that I wish was available on a regular basis. This dish was called Egg in Verjus, Verjus in Egg. 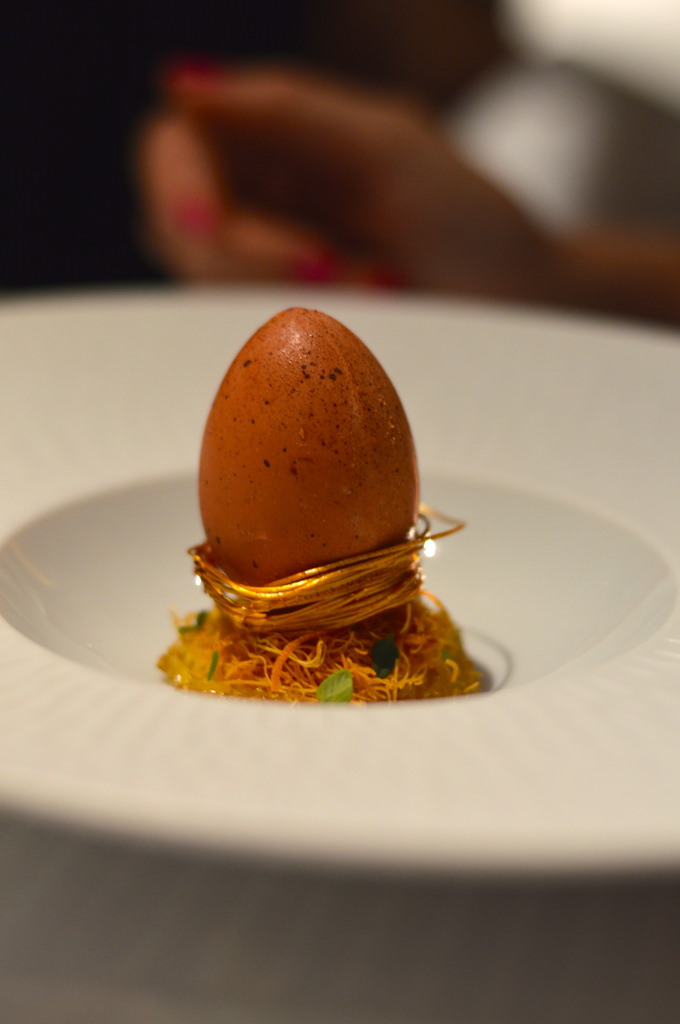 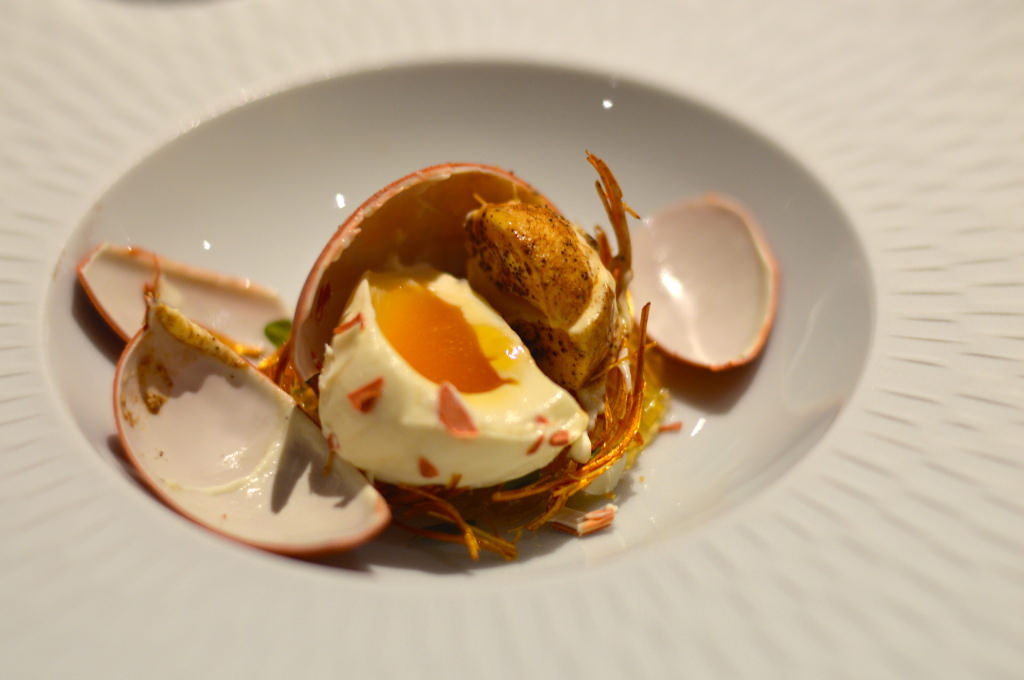 I don’t know how to describe the next pudding, and it’s name does little to give away what was about to be presented. ‘Botrytis Cinerea’ was a series of flavoured spheres, that reminded me of Christmas in both its styling and taste. 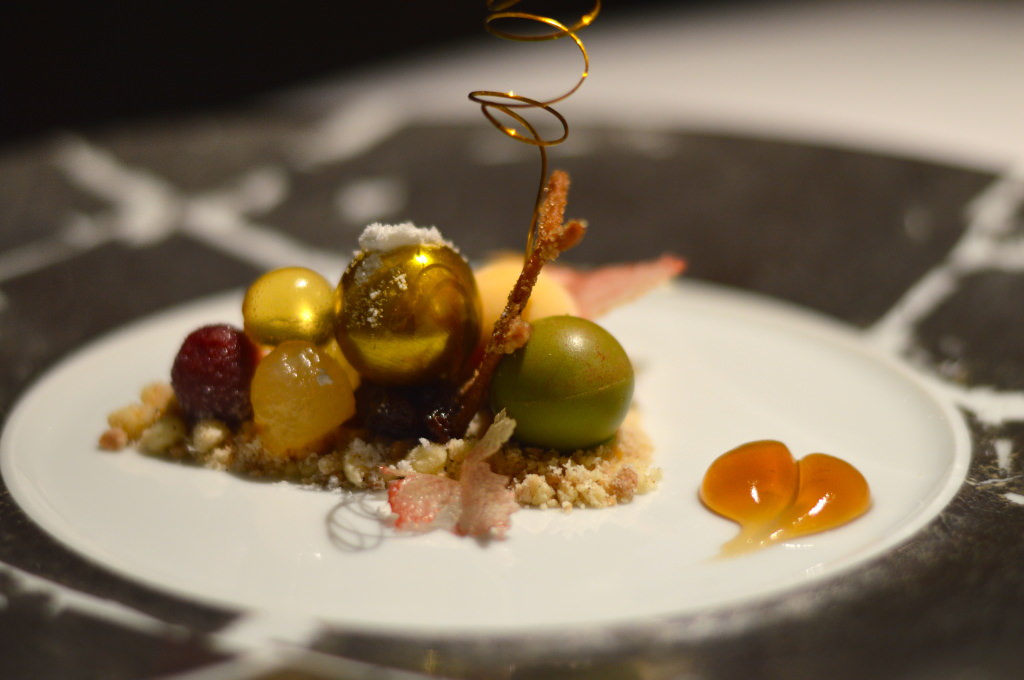 Whiskey Wine Gums were presented on a map, denoting where they had originated. We were told to eat them in order of 1-5, with the first and last boasting the most mild flavours, whilst number 4 had an incredibly smokey, and slightly unpleasant flavour in my opinion. However I am no whiskey connoisseur . 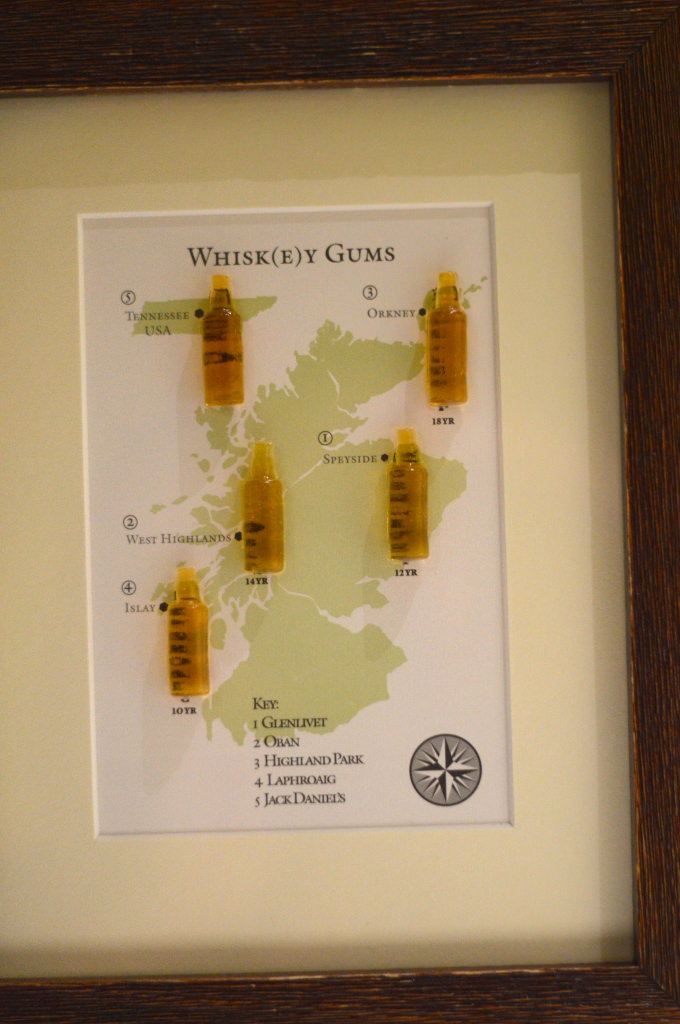 Our final course, was described as ‘Like a Kid in a Sweet Shop’ where we were presented with bags of sweets, including an aerated chocolate with mandarin jelly that tasted like a cross between and aero and a jaffa cake. An apple pie toffee complete with edible wrapper, and the most incredible ‘Queen of Hearts’ strawberry pie, fashioned into a playing card, tucked into an envelope with an edible seal. 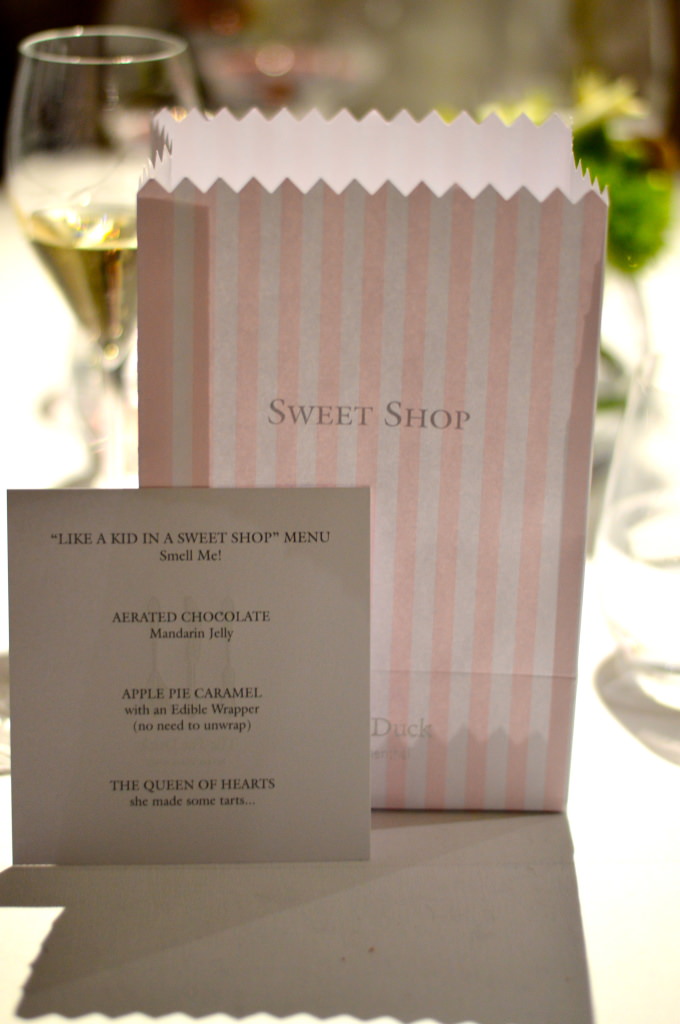 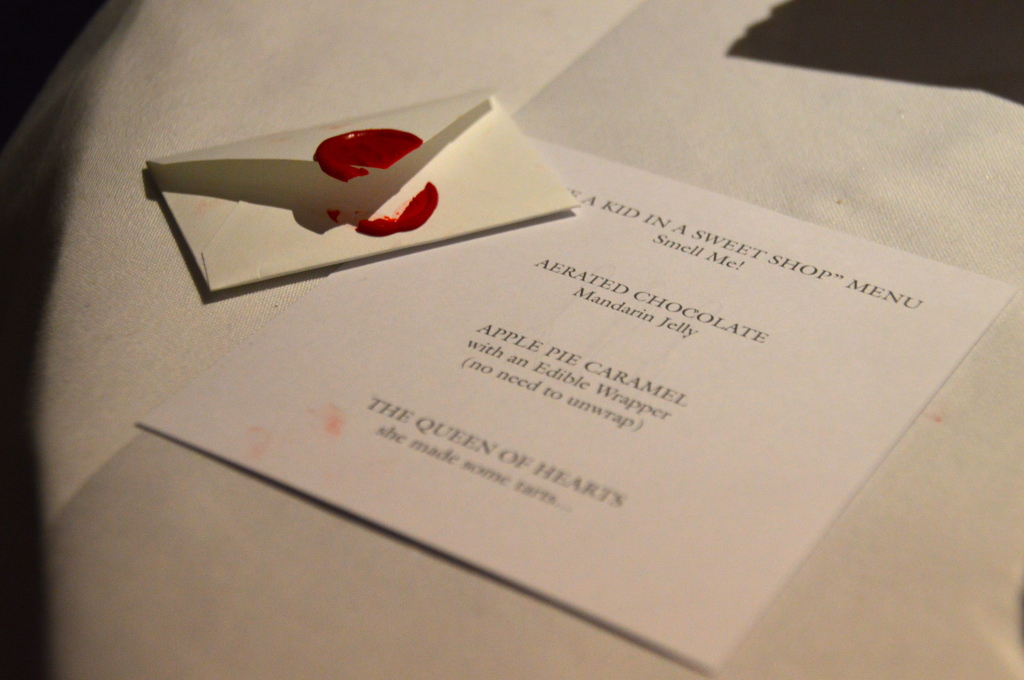 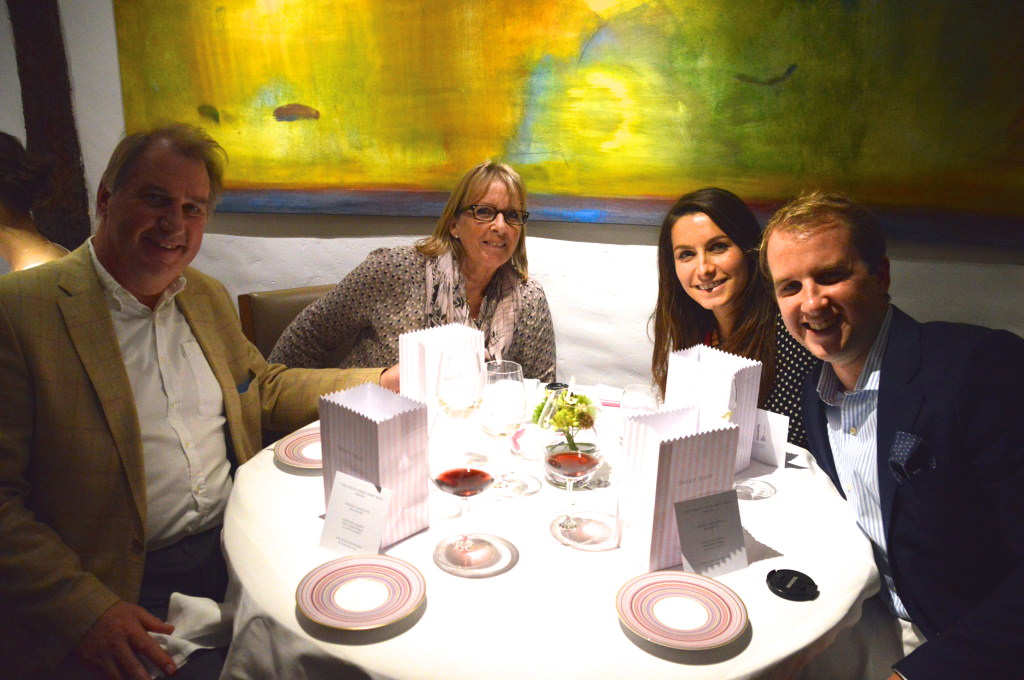 After a quick tour of the kitchen, where I was able to ask the chefs a few questions (sadly no cameras in there), we left, four hours later and considerably heavier. Somehow although we’d eaten an enormous amount, the portion sizes and balance of flavour, I wasn’t uncomfortably full. Well done to the amazing Fat Duck team, and thank you for a wonderful day.