Runner’s Need is hosting a series of Marathon chats at various shops across London in the lead up to the London Marathon, and this week’s topic was Training and Injury prevention, led by Greg Ryan, a Musculoskeletal and Sport’s Physiotherapist.  The sessions are free, which means they getting booked up quickly, find out more info here. I think they might all be fully booked but you can add yourself to the waiting list.

I arrived at 6.28 on the dot, but luckily I have awesome friends (Zoe, Charlie and Lissy) who saved me a front row seat! Yes we are keenos, and all asked tons of questions at the end! 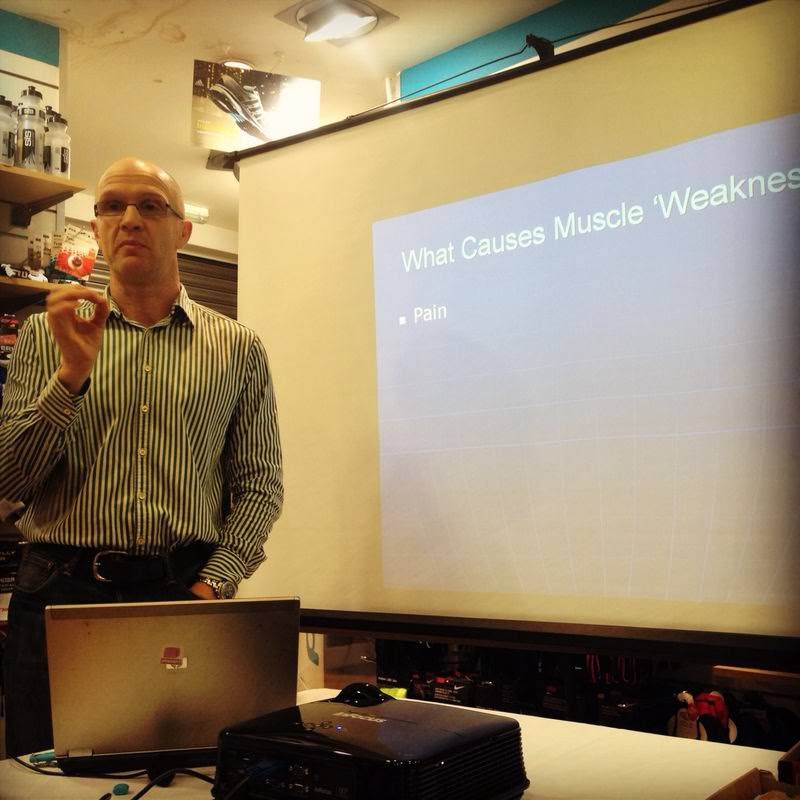 ‘Running is not bad for your knees, running on weak muscles is bad for your knees.’
According to Greg, the key to injury prevention is strong muscles- the stronger your muscles are, the more protected your joints, ligaments, bones and nerves will be.
What is Strength?
‘The ability of muscle to produce force’ (Clarke, 2001)
·         Maximum Strength-force generated in a single max voluntary action
·         Absolute Strength- force generated irrespective of body weight
·         Relative Strength- force generated relative to body weight
·         Elastic Strength- force generated at high velocity of anisometric action= muscle power
·         Strength endurance- force generated for sustained or repeated muscle action
Any exercise that is intended to increase the ability of a muscle to produce force is a strength training exercise.
We were told that running doesn’t make you strong, running makes you better at running. In order to run to keep fit, you must be fit to run. If you have a weakness and you go running, running will not strengthen or fix this weakness, rather it will adapt and compensate.
Muscles act as shock absorbers when you run- when you run the level of impact on each leg is 3 x your body weight per step. So when running a marathon, if we assume that I take the average of 500 foot strikes per km, then the force on each leg is
(Bodyweight x 3) x footstrikes per km x km in 26.2 miles
(60 x3) x 500 x 42 = 3, 780,000kg per leg during a marathon
That’s only the 26.2 miles of race day, not to mention the months of training in the run up! Scary huh! Runner’s legs muscles need to be strong enough to absorb and effectively dissipate this energy to allow normal and healthy function of the joints and ligaments and therefore prevent injury.
What Causes  Muscle Weakness?
·         Pain
·         Swelling
·         Ageing (you lose 3% muscle mass in the decade between the ages of 50-60, after that you lose 3% a year!)
·         Overtraining (rest days are just as important as training days)
·         Disuse
·         Reduced patient compliance (ie not doing what the physio tells you to do)
·         Medical problems
Greg’s advice, in order to combat muscle weaknesses and strengthen the muscles in your legs, is to perform single leg weights, including squats, lunges, hopping, as well as using the weights machines, and to perform these lower body weights at least twice a week (although not on consecutive days). 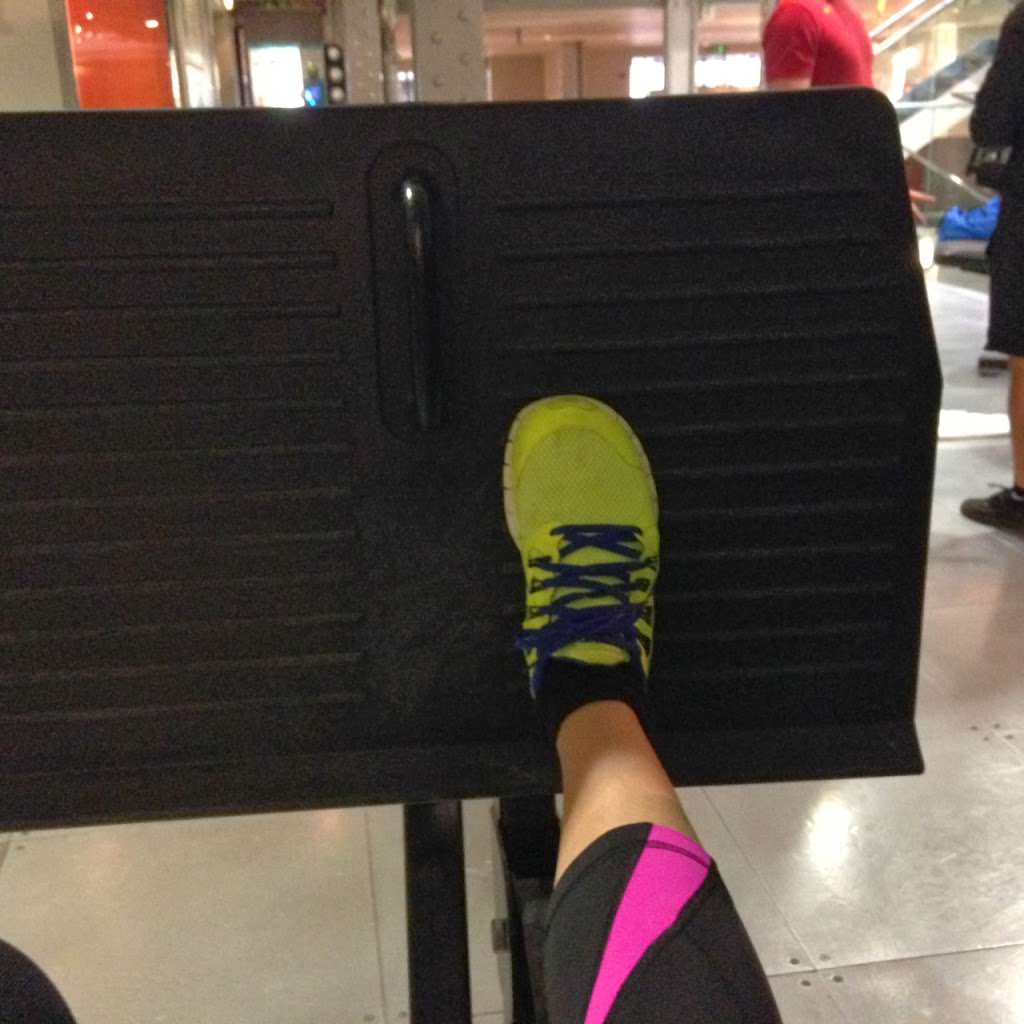 It was recommended that next time we went to the gym to test out our muscle functions on the leg press and leg extension machines. So of course, that’s exactly what I did the next morning. The idea was to start on the leg press with our perceived strongest leg, at 30% of our body weight. For some reason, the leg press at my gym only starts at 27kg, so that’s where I began and moved up to over 50% of my body weight.
30 reps each leg @ 27kg
20 reps each leg @29.3kg
20 reps each leg @33.5kg
Greg explained that we should look out for a difference in effort between our legs, and the weight loading capacity. If you could only do 15 reps on one leg, but 20 on the other, then that’s a 25% difference in muscle strength between legs. I didn’t notice too much of a difference in my legs on the leg press, although I think the right was a little stronger.
However, when I moved on to the leg extensions, WOW. It was recommended that we start again at 30% of our body weight, but it felt almost impossible. I had started on my right leg, which I perceived as being the stronger and immediately had to drop down to 16kg.
15 reps each leg @16kg repeated 3 times
My right leg felt noticeably weaker, and this strength move had me grimacing and grunting (much to the horror of the man sitting directly opposite me at the gym). I emailed Greg to see what he made of my experience;
‘What you are demonstrating with the leg press and knee extension is ‘within limb compensation.’ Essentially, your right quads, when tested in isolation, are weaker than your left. Yet, when we look at the leg as a whole (leg press), you can’t feel much difference – this comes back to what I talked about on Monday in that that the body is fantastic at hiding weakness, i.e. in your case, the quads.
Interestingly, the fact that you are right handed but your right quads are weaker, is not a surprise – if you are right handed then one tends to be right footed (or at least right leg dominant). However, this dominance tends to be skill-related (to kick a ball you stand on the left leg, hence the left leg is more stable). Most people are right footed, but I see more right leg problems than left.’
I’m going to be working with Greg in the next few weeks to put together a leg workout for myself and sharing it with all your runners out there, as well as figuring out how to strengthen my quads in particular. I’ve been told that I’ve got weak glutes before, and tight calves, so I have a feeling my lower body weights workouts are about to get a whole lot longer and more involved!

Edited to add: I’ve received a few negative comments about this article on twitter- I must reiterate that these are the views and opinions of a professional physio and not my own. I am a recreational runner with no more than personal experience to go on.