Read Part 1 of our London to Paris adventure first here.

We were on our way to Gournay en Bray at the end of yesterday’s blog post, so we’ll continue from there. We cycled on in slightly warmer and better moods than pre-brekkie, with the plan to ride to Neuf Marche before making another stop. The ride was mostly undulating through quiet roads and small villages. I actually don’t remember a lot of this section, except for being incredibly pleased when we got to Neuf Marche and saw the cutest pizzeria with other bikes in the garden. 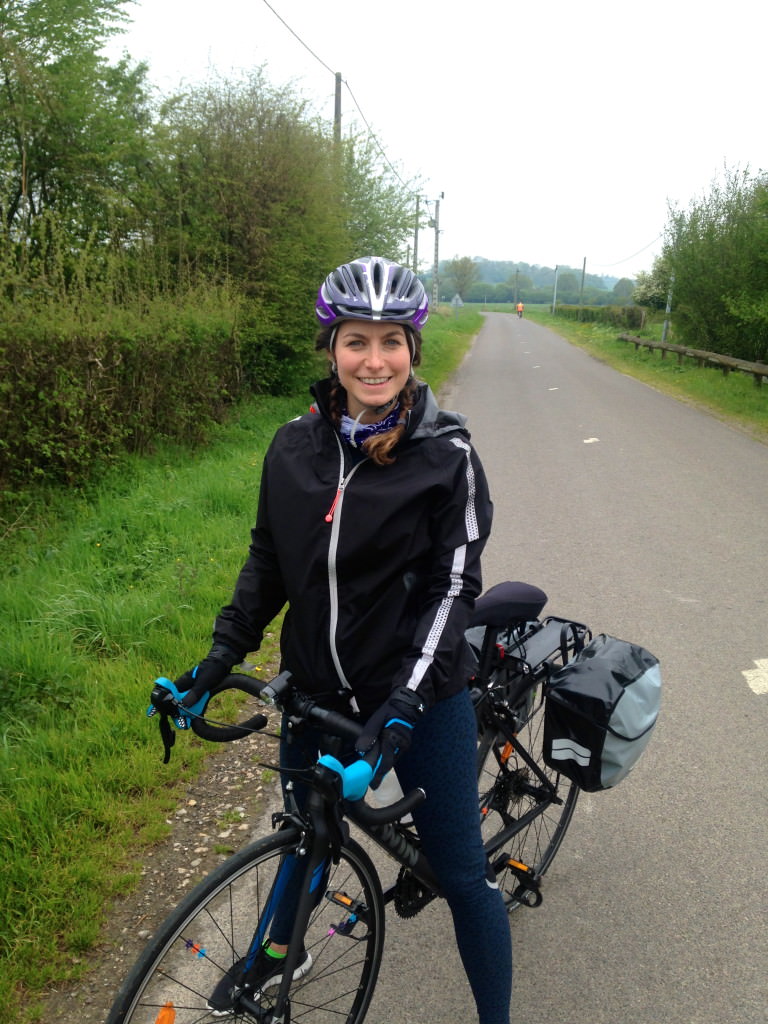 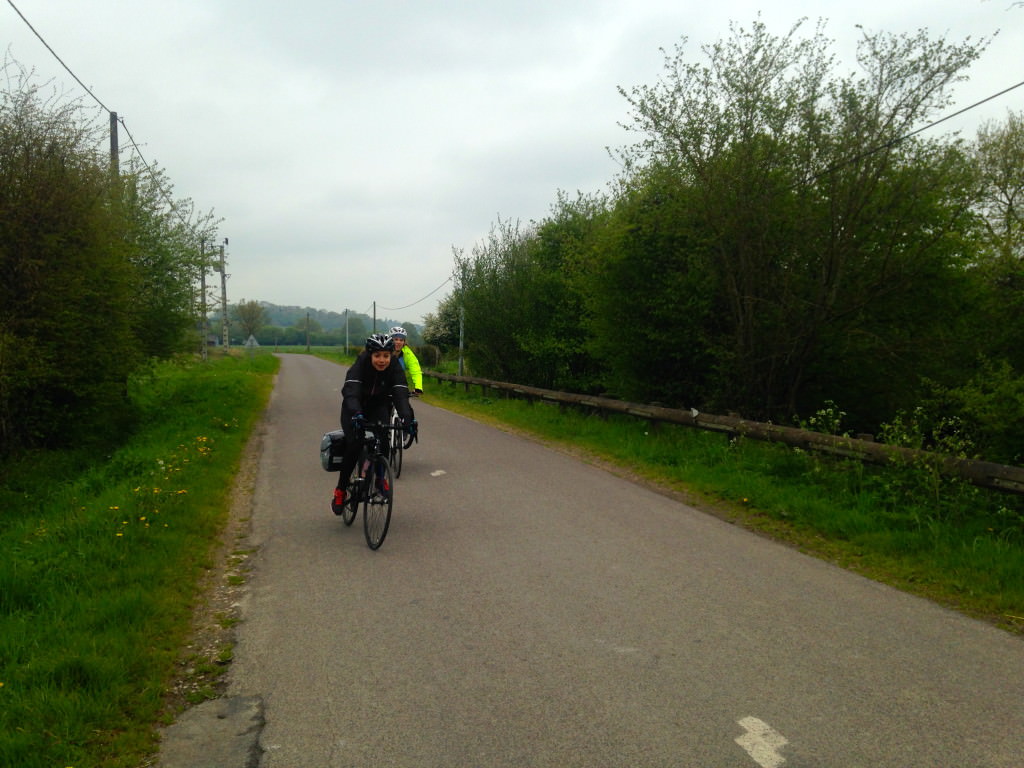 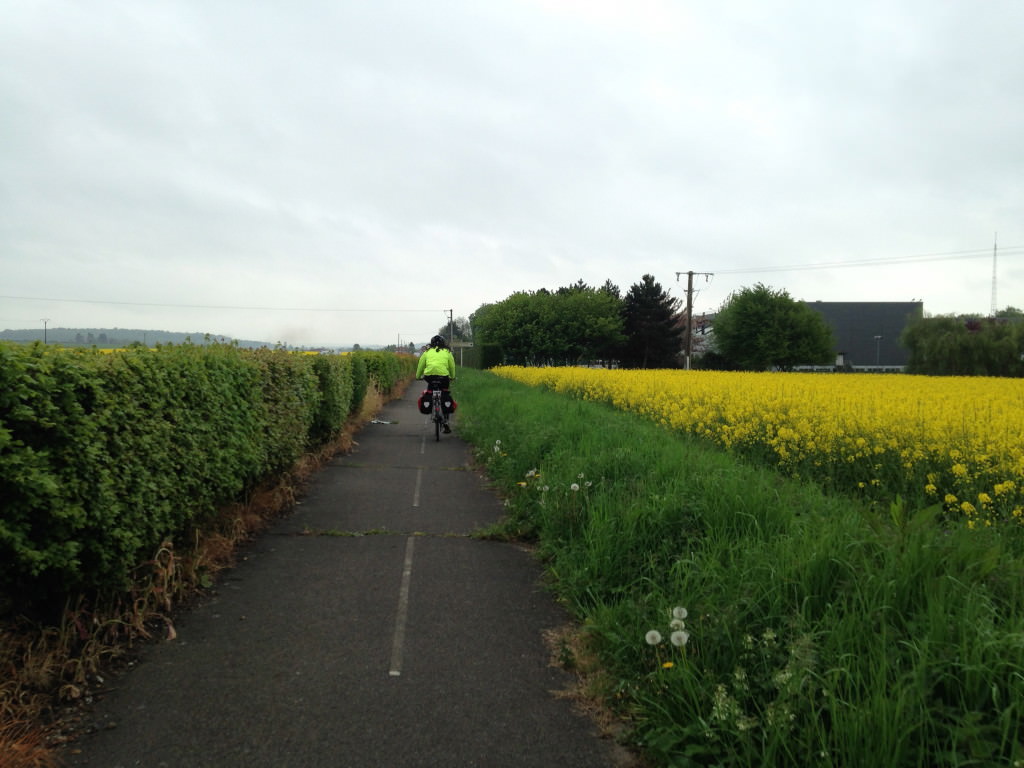 We ended up stopping here for well over an hour, warming up, eating, using the loo and charging our phones. Although it wasn’t raining outside, we were all really, really cold so the roaring fire and hot, salty chips went down a treat.

We were warned that the next section of the ride to Gisors would be full of rolling hills, although I definitely thought that the owner was joking when he told us this. He wasn’t.

I had a complete sense of humour failure at the top of the biggest hill of the weekend, although I did at least manage to convince myself to stay on the bike rather than throwing it off the side of the hill/walking. 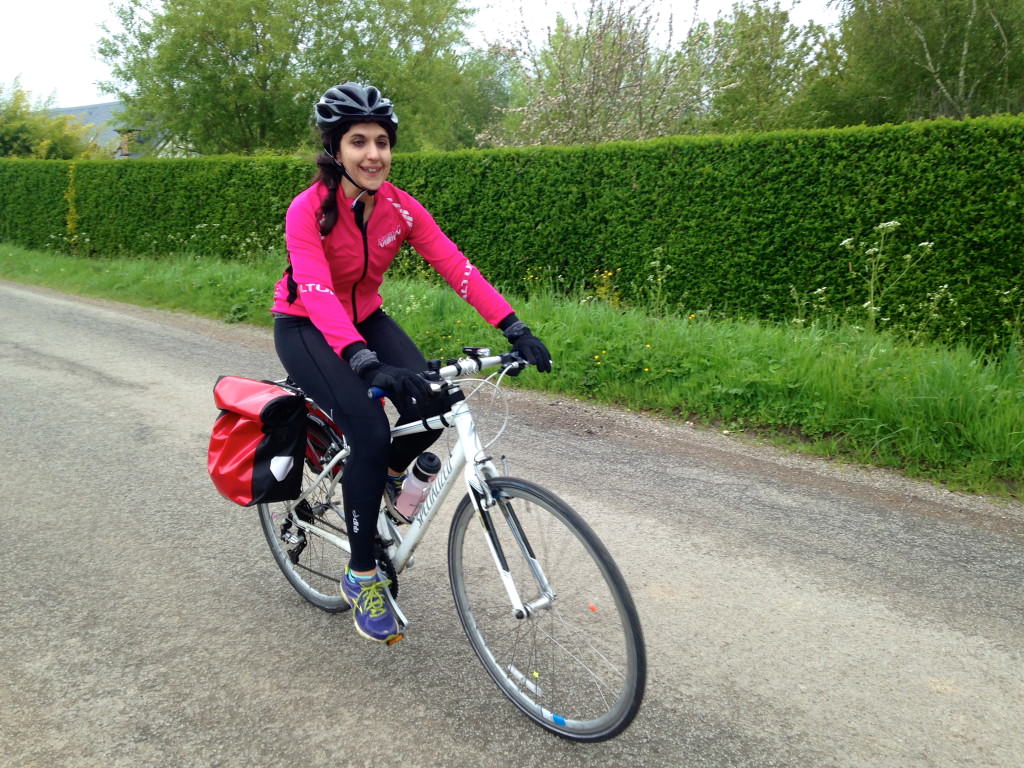 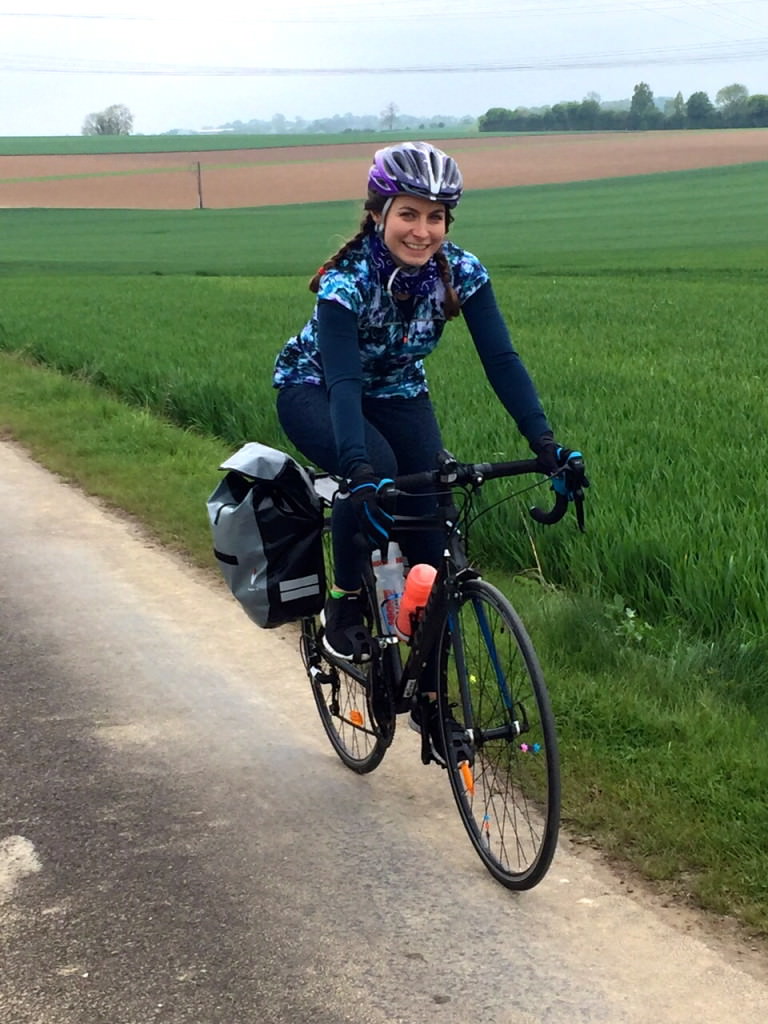 Whenever we got tired, cold or angry, we ate. There was a LOT of eating that went on this weekend. So after a quick snack at the top, tempers improved we made our way to Gisors- the largest town in the area, to hunt for a new bike pump. We were able to get our tyres pumped up at Sport 2000 on the edge of town, purchase a new mini pump and get back on to the Avenue Verte for the final 20 mile push for the day.

Back on the car free path was wonderful, and spirits were high…until I got a puncture. WE were literally 3 miles from our B&B, and of course it was now raining. Luckily we were far more successful changing this innertube, and although it took us a while to get the wheel back on, we were only delayed by half an hour. 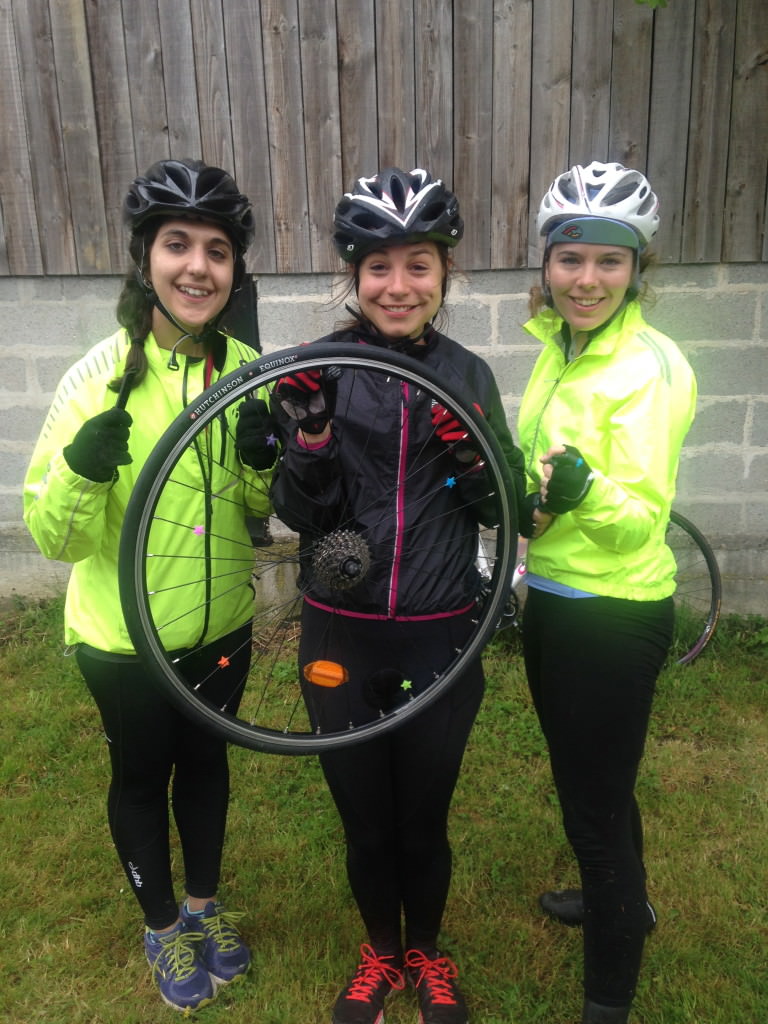 We’d been awake for 15 hours and on the bikes for 13 hours by now, and were really really looking forward to bed. Sadly, Googlemaps took us to the wrong town, and we added a further 3 miles to our daily total getting to our B&B in Chaussy, making it 86 miles in total. Thankfully, the owner, Gaelle, could not have been more hospitable. We had a safe indoor room to keep our bikes, a huge quadrouple room for us to sleep with amazing power shower plus she cooked us Spaghetti with tomato sauce, and chocolate cake for supper. The room cost us 25 euros each, plus 8 euros for dinner- a complete bargain. We completely conked out for the night at 9pm- rock and roll. 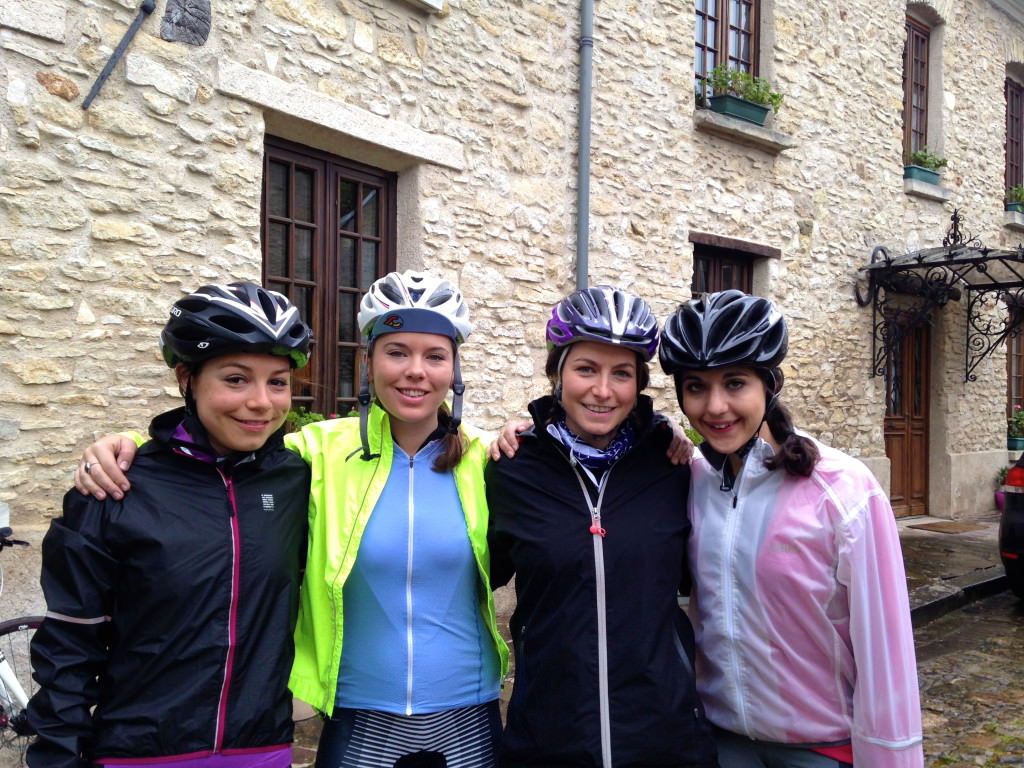 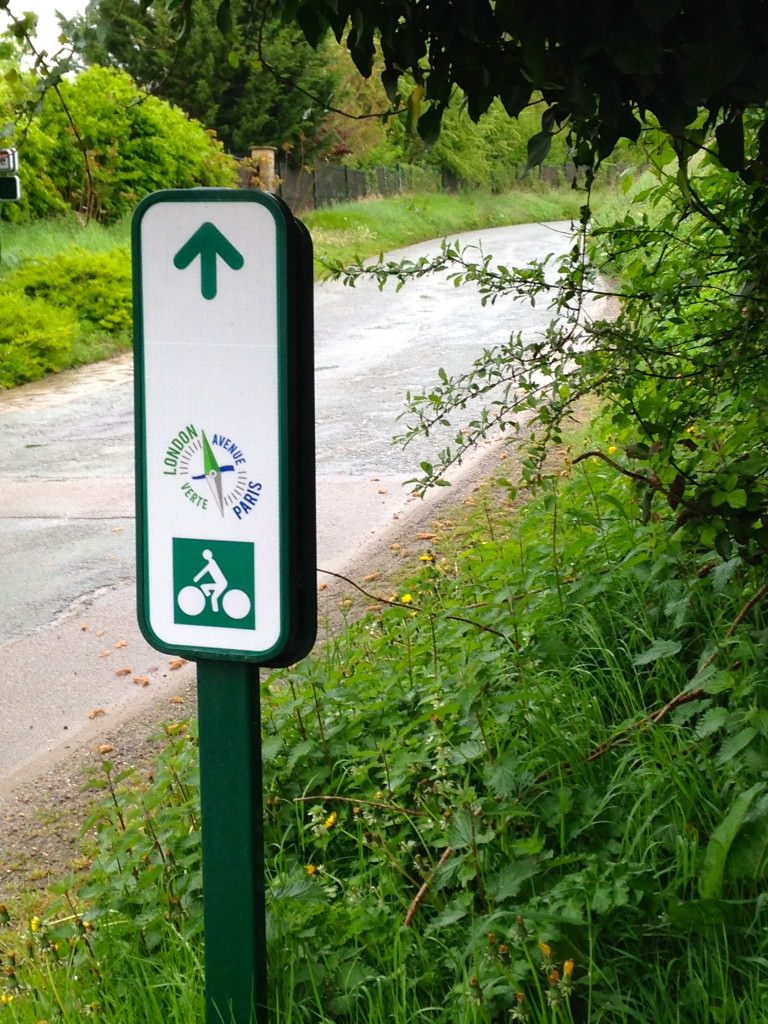 With only 50 miles to cover on our final day, we had a leisurely breakfast (included in the price, Gaelle also packed us off with croissants and bread to snack on during the day) and left around 9.30am. There were signposts for the Avenue Verte leading all the way to Paris, so our plan was to follow them. However, we weren’t expecting the pebbly path that we found, and it wasn’t long before I had my second puncture of the trip. We were in the middle of nowhere, and I worried that my whole tyre was wrecked. 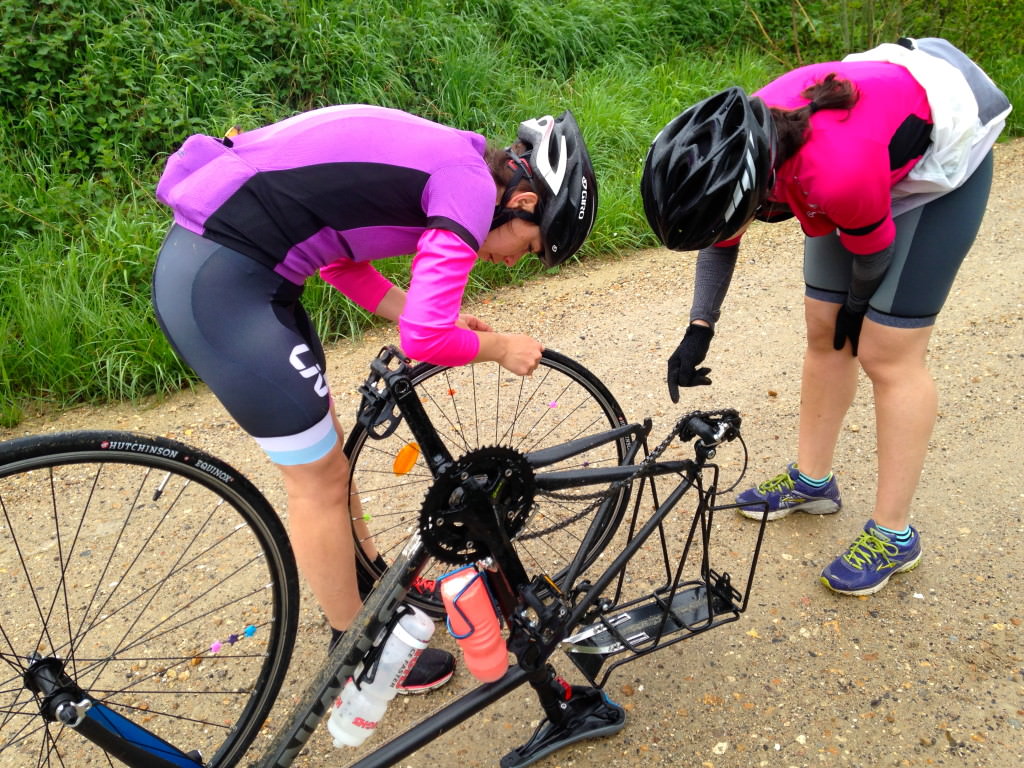 The girls came to the rescue again, and we easily replaced the inner tube with my last spare and gingerly set off up the path. I didn’t want to risk another flat tyre so we diverted off the Avenue Verte and onto smoother roads for the next bit, which was slightly less direct but a lot more pleasant. The undulating roads took us for the most wonderful coffee stop in Cordinmanche, where the bakery stayed open for us, gave us some more snacks for the road and allowed us to use the loo in the back of their shop. The hospitality we received from everyone on the trip was absolutely amazing, and so heart warming. People would ask us about our trip, and couldn’t believe that we four girls had cycled all the way from London! 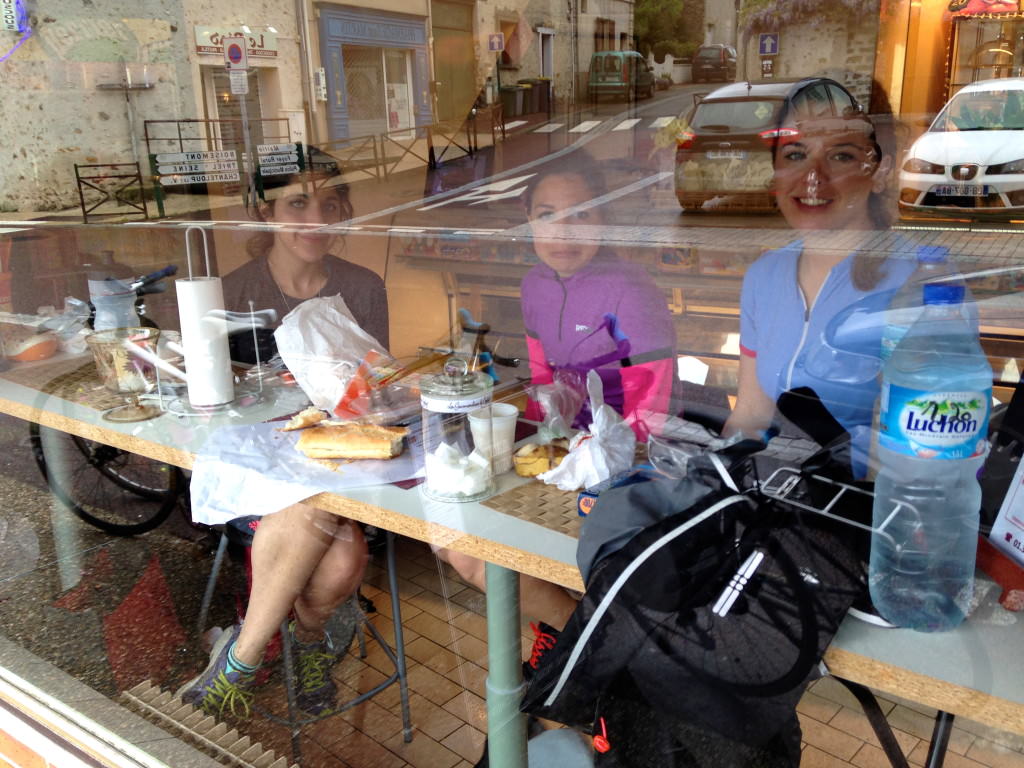 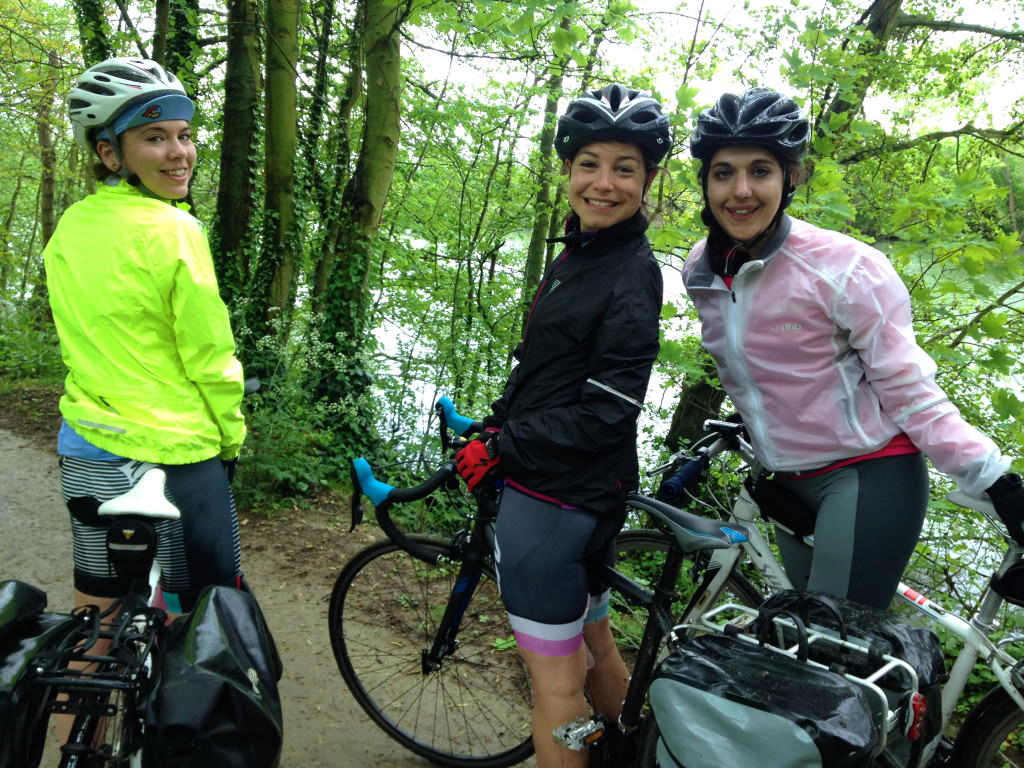 Refuelled and with good spirits despite the terrible weather, we made a final push for Paris. Back on the Avenue Verte, we came to the conclusion that it is not made for road bikes, particularly when the weather is bad. Huge stretches had turned slick with mud, and it became a core workout to keep our bikes upright and we quickly became coated in mud. There were a lot of yelping and screaming but we made it to the suburbs and caught our first glimpse of the Eiffel Tower. 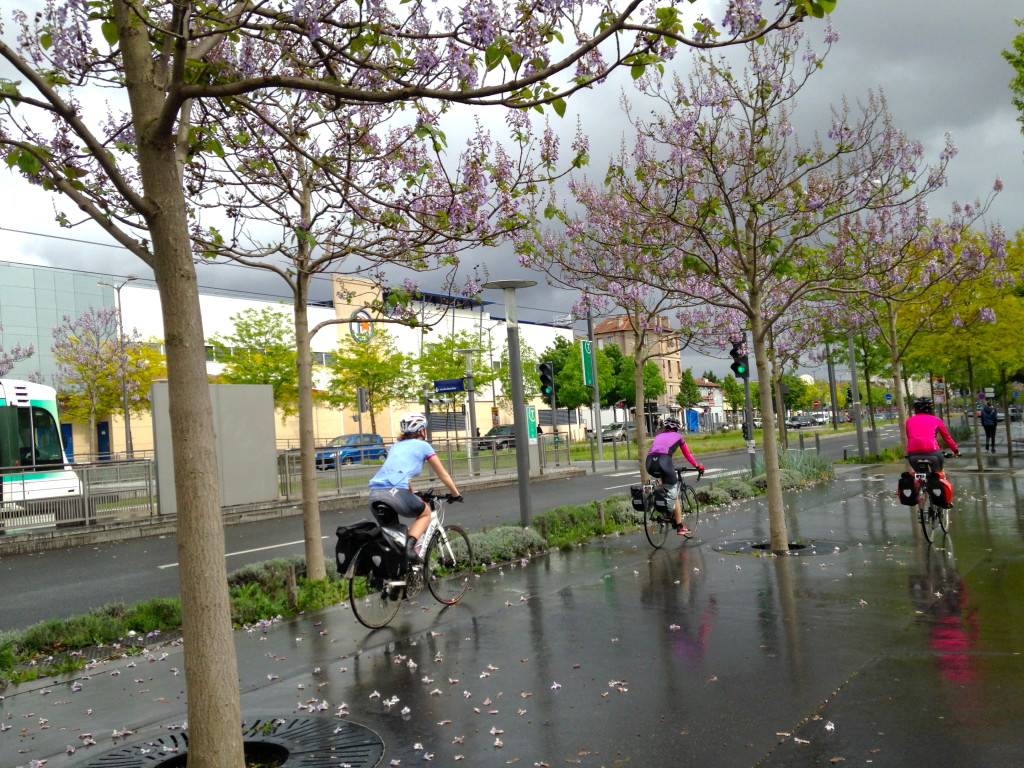 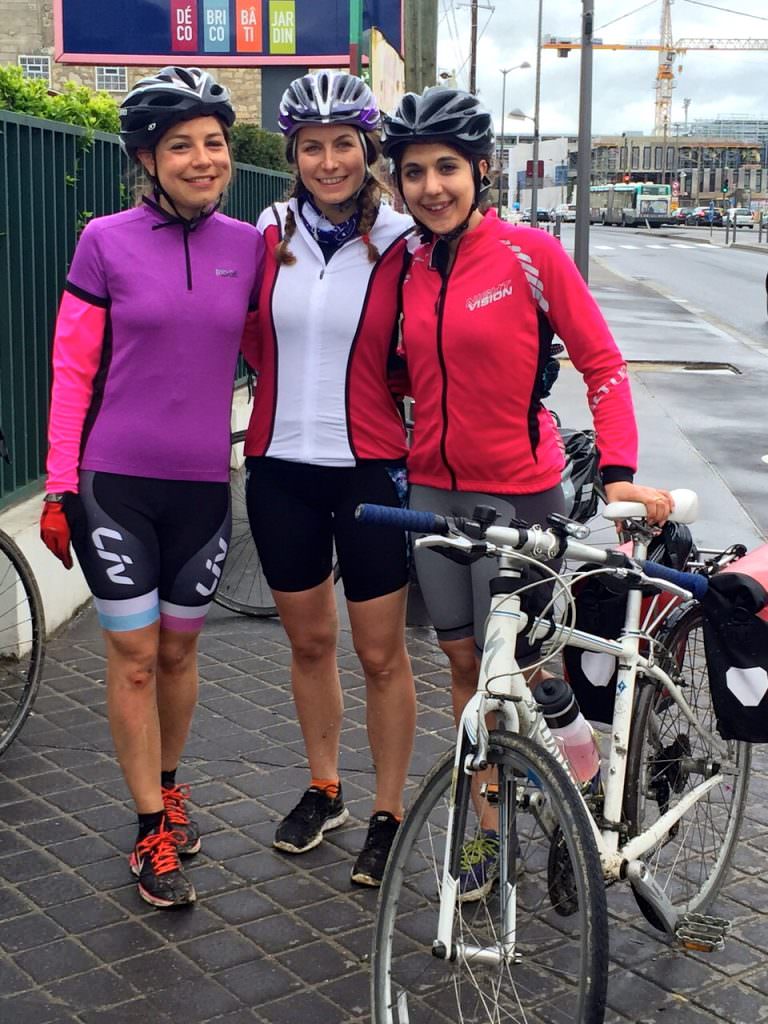 This is where we had our first and second falls within a split second of each other- with Emily and Anna taking the wrong angle trying to get onto a bike path and literally falling sideways. No-one was hurt but it did shake us. We were so close, yet it seemed to be taking so long.

The route into Paris is anything but easy, with confusing bike paths that come to a complete stop, dual carriageways, and overpasses up 3 flights of stairs. But we made it, and soon the streets became familiar having run the marathon through them last year.

We were all a little overwhelmed as we pulled up to the Eiffel Tower, having finally completed our 203 mile journey. We literally threw our panniers off to take these iconic pics- by the way lifting a bike for this picture is not as easy as it looks! 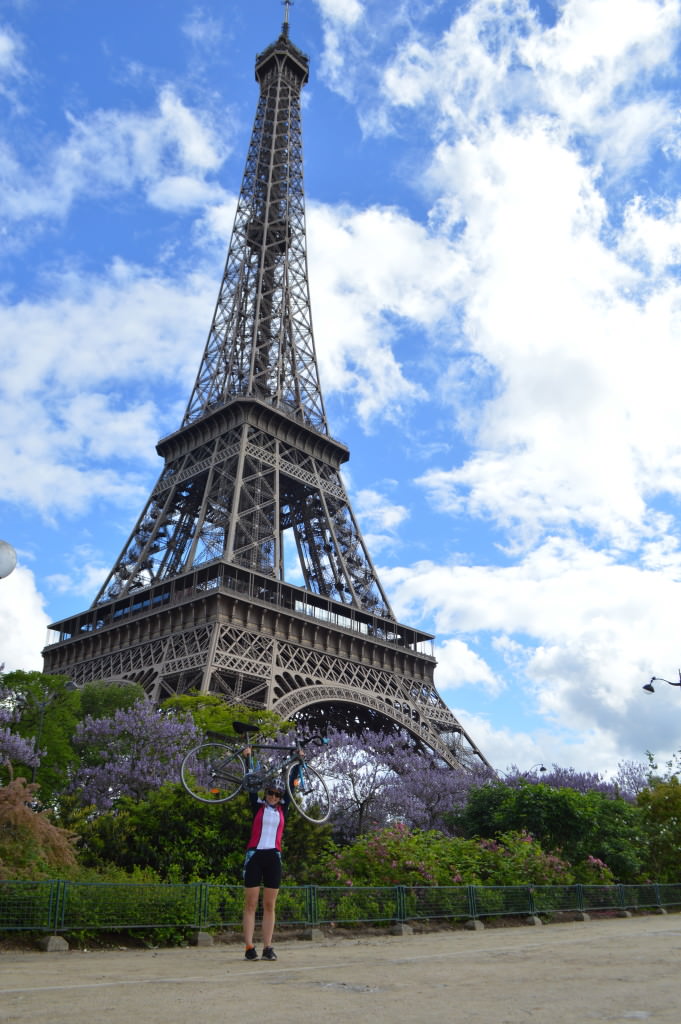 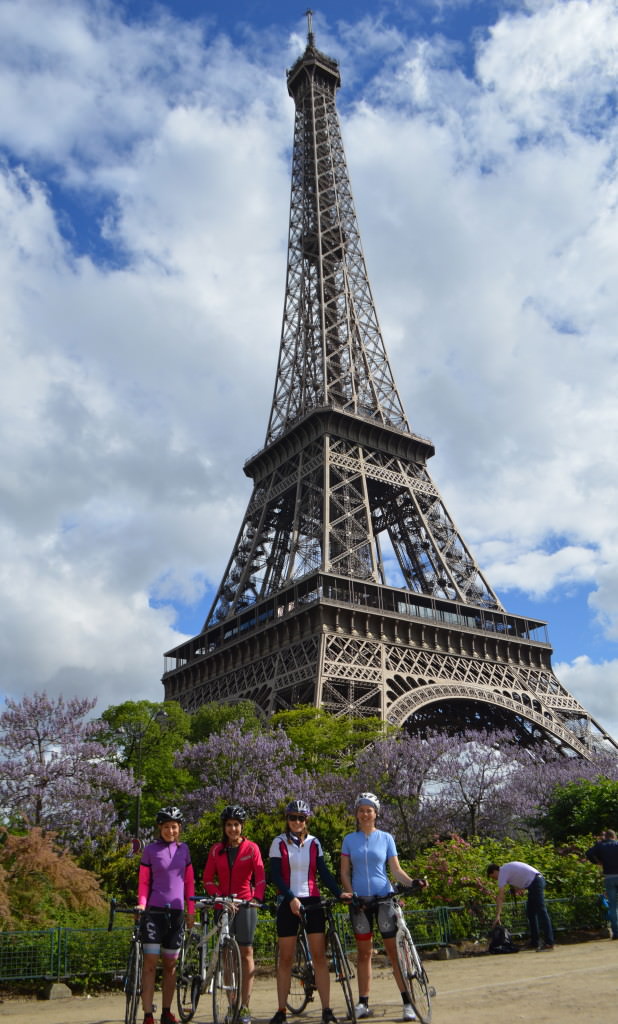 Posing done, we got back on our bikes to cross Paris once more in search of our Air B&B for the night. As if it knew we were done, my knee, that had previously been aching but not too bad, completely seized up, making every rotation incredibly painful. I just had to keep moving, so I picked up the pace and shot through Paris on a mission.

The little apartment right next to Gare du Nord was ideal, and after some serious mud washing showers, we nipped out for a celebratory supper at Chez Janou with some much deserved Champagne! I am so grateful to have these girls as friends (we were at school together!), and pleased that they’re willing to go on adventures like this with me- there’s already talk of the next one! 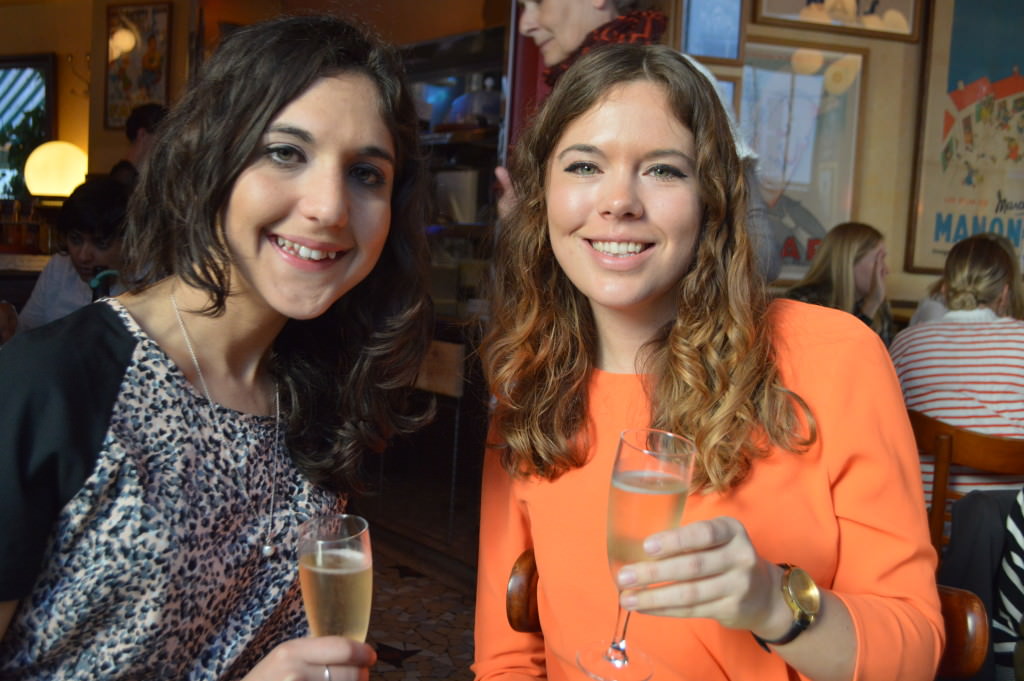 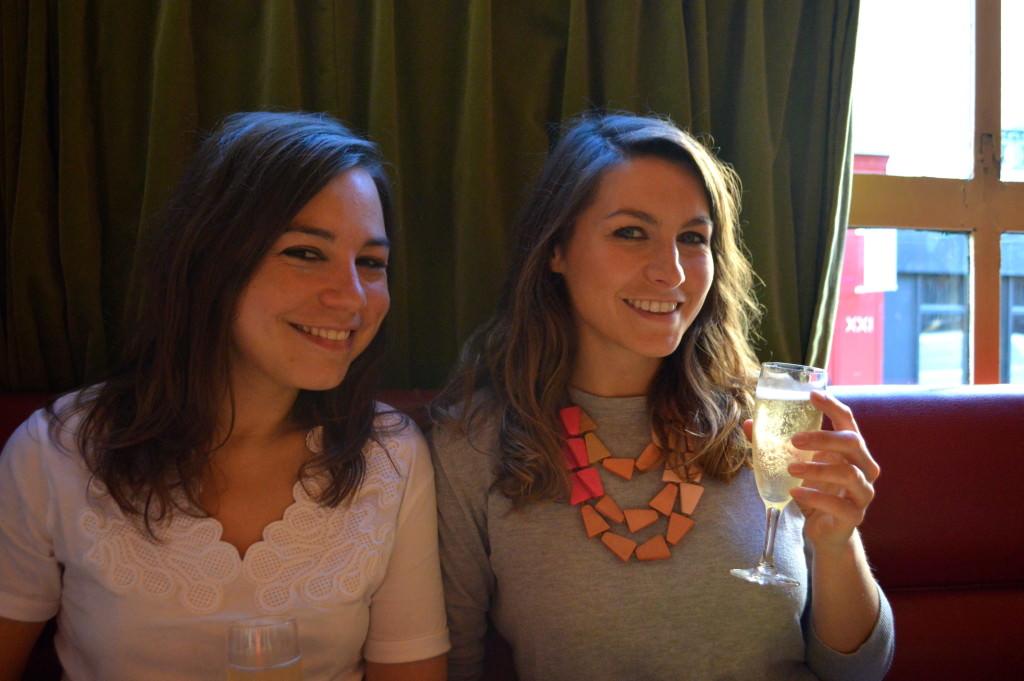