Well, if you were running the Hampton Court Half Marathon yesterday, their half marathon measured 0.35-0.4 miles short. Quite a big difference! Apparently we were sent the wrong way between miles 1 and 3, cutting the whole route short. Normally I would be annoyed, especially for those trying for a PB it’s really frustrating when a course is short, voiding the PB, however today I was actually OK with it!

I collected my packet from the overcrowded sports hall, which turned out to be a smoother transaction that it originally looked. There was an enormous queue to get in to the hall, although it wasn’t clear quite what they were queuing for! A not so quick portaloo stop and Steph, Lissy and I made our way to the start. I was planning to run with Ashley but hadn’t found her yet, so it was a relief to find each other in the mass. Positioned behind the 2hr 20 pacer, we were a bit further back than we would have liked, but the crowds were thick walking towards the start line so we followed, hoping to push forward during the first mile.

Warning- the photos in this post aren’t great, due in part to an iPhone, bad weather and a rather unattractive course! 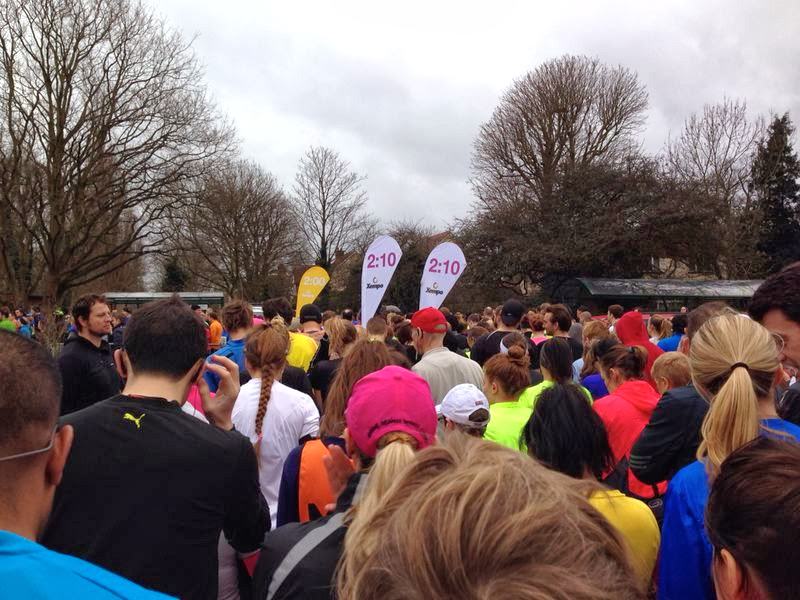 The first mile was crowded, and with runners fighting for space with cars and lorries, there was a fair amount of weaving. We managed to get in front of the 2.10 pacers and hoped to settle in to a comfortable pace. At this point Ashley and I were still pushing to get her a new PB of 2.05 or faster. Then we hit the mud, potholes and more mud in the woods… 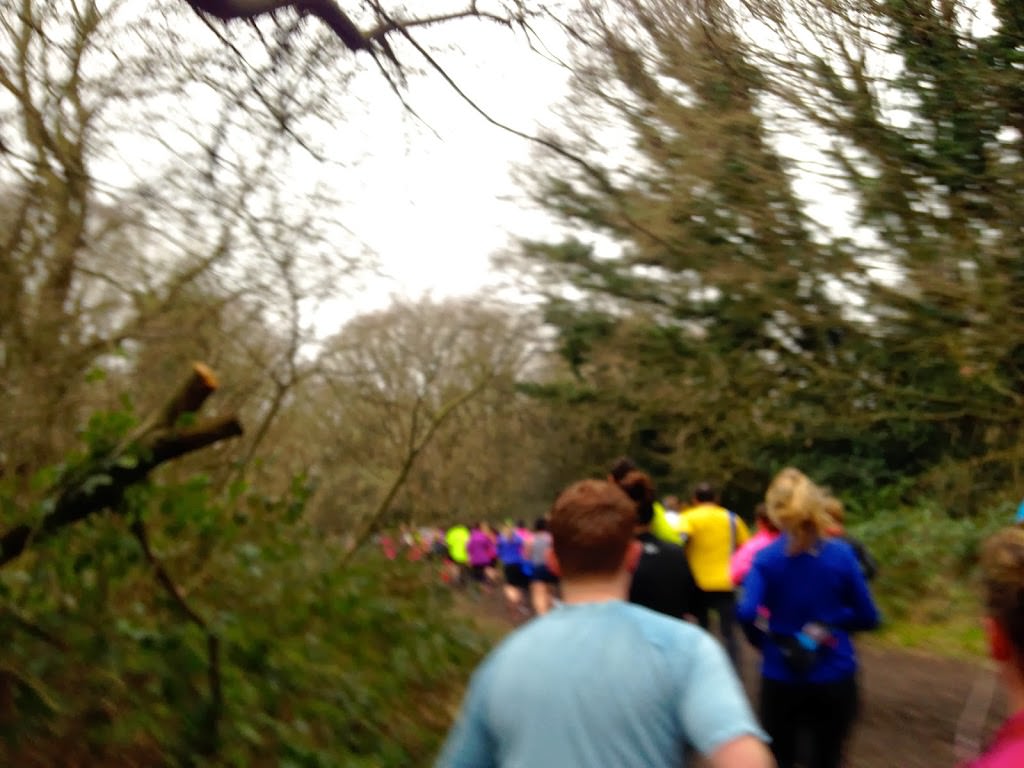 By the time we hit the 3 mile marker we were still on pace but my garmin was showing that we were only at 2.58 miles. Around this point Ashley told me that she wasn’t sure if she could hold the pace, and coupled with strong winds, and a short course, we realised that there was probably not going to be a PB. So far the route had taken us along a lot of residential roads, before joining the Thames Path,  where we ran past Hampton Court Palace. 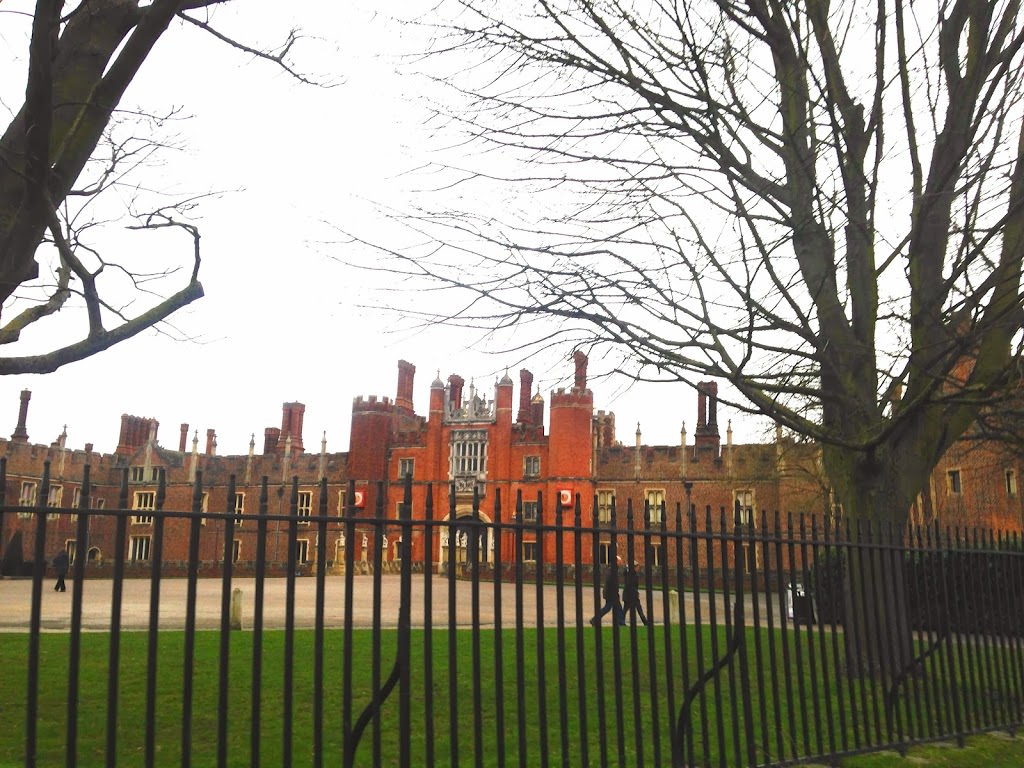 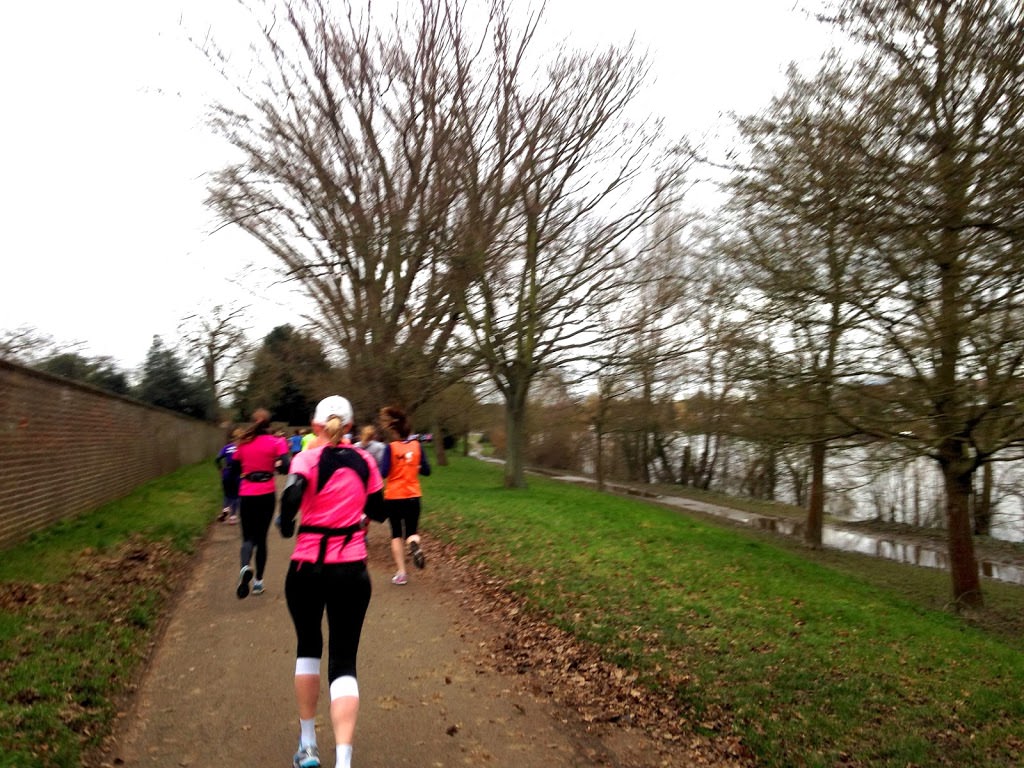 We ran onwards for the next few miles, stopping when we needed to. At about 7 miles we took some fuel, I’d packed both Gu and some shot blocks. My stomach had been feeling off and I really didn’t fancy a Gu, so I was pleased to have the option of strawberry shot blocks. 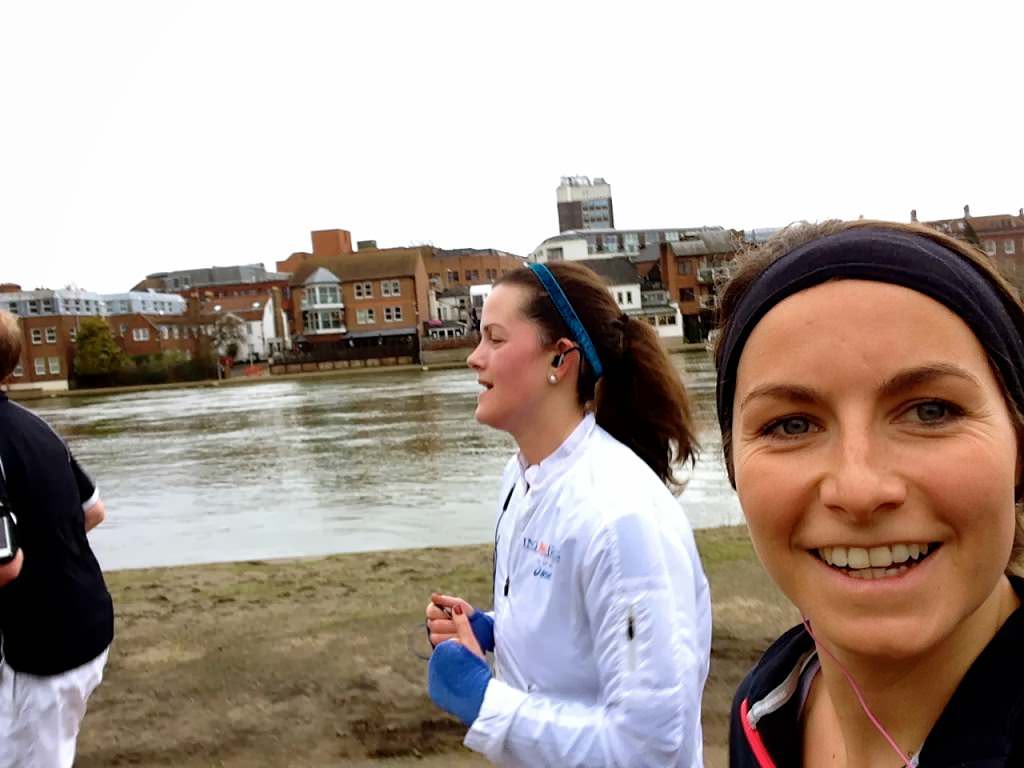 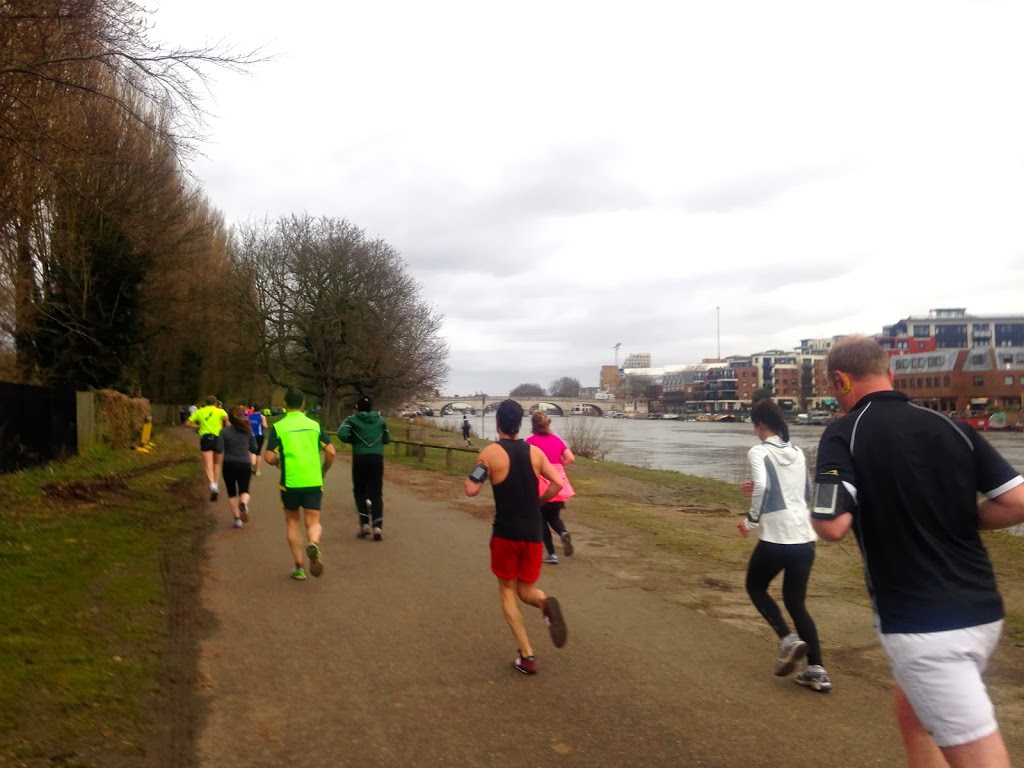 Around the 10 mile mark the 2.10 pacers passed us, and we knew we probably wouldn’t be finishing in under 2hrs 10 mins. We’ve decided that to chase Ashley’s goal we’re going to sign up for another race in a few months time. Today was just not the day. Once we established that the PB was gone, we could relax into an easy pace, stretching when we needed to, walking through water stations and catching up with each other. 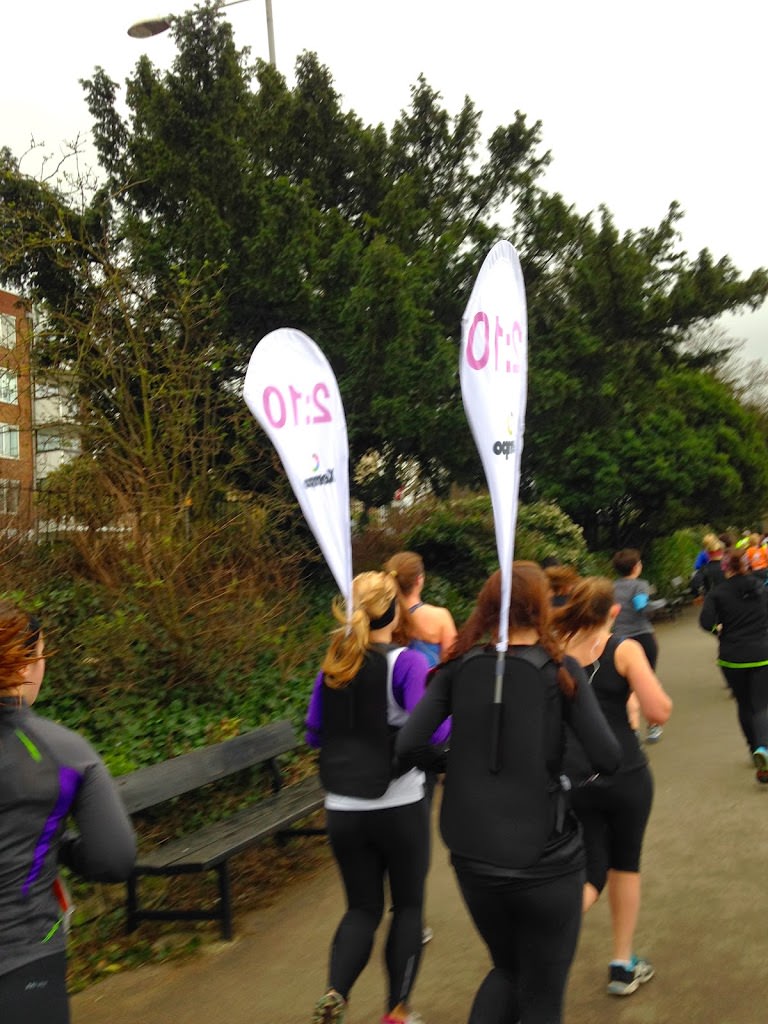 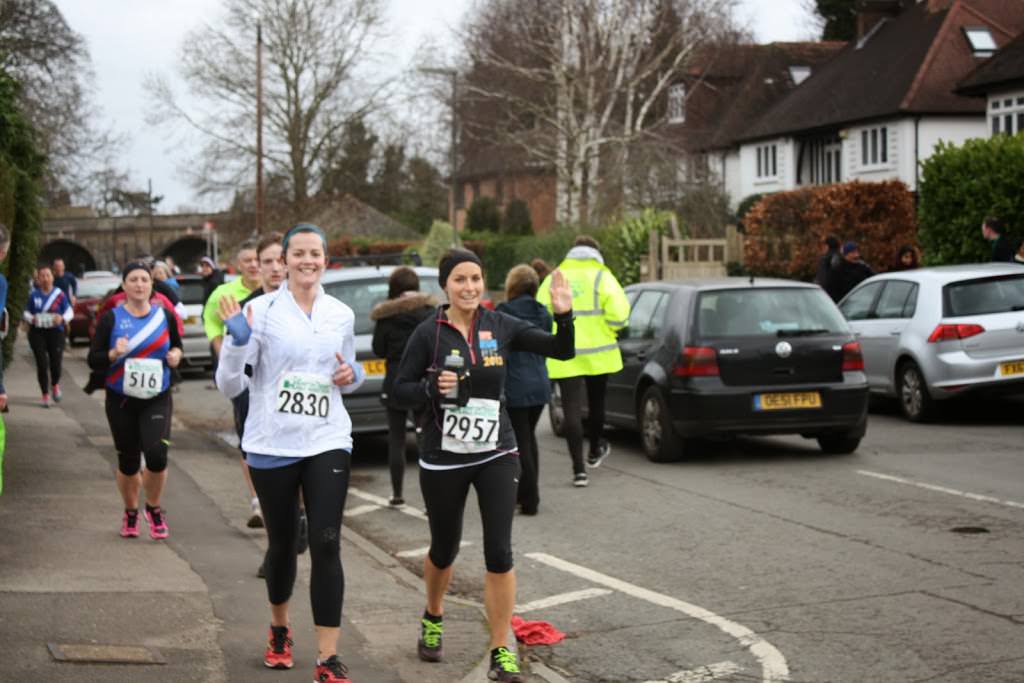 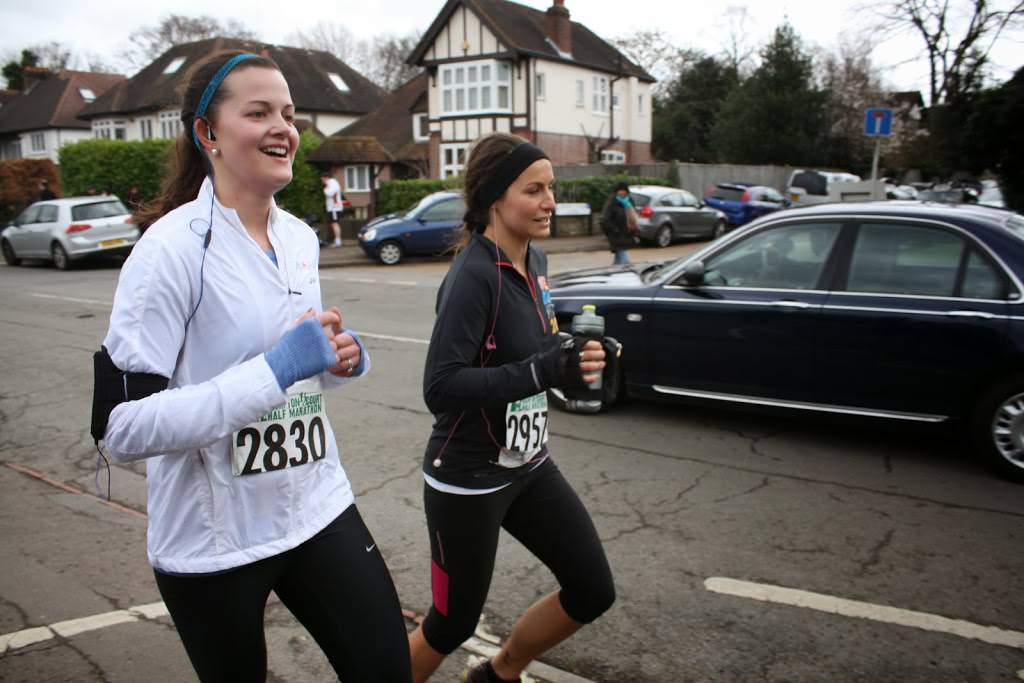 The final 3 miles seemed to pass so slowly, we just wanted to be done! I loved seeing Leah and Jason cheering from the sidelines, they were acting as impromptu marshals trying to ensure those still running weren’t crushed by pedestrians, cyclists and cars! Ashley and I crossed the finish line at 12.75 miles and with my garmin showing 2.07 for an average pace of 10.01- not bad for a Sunday long run. 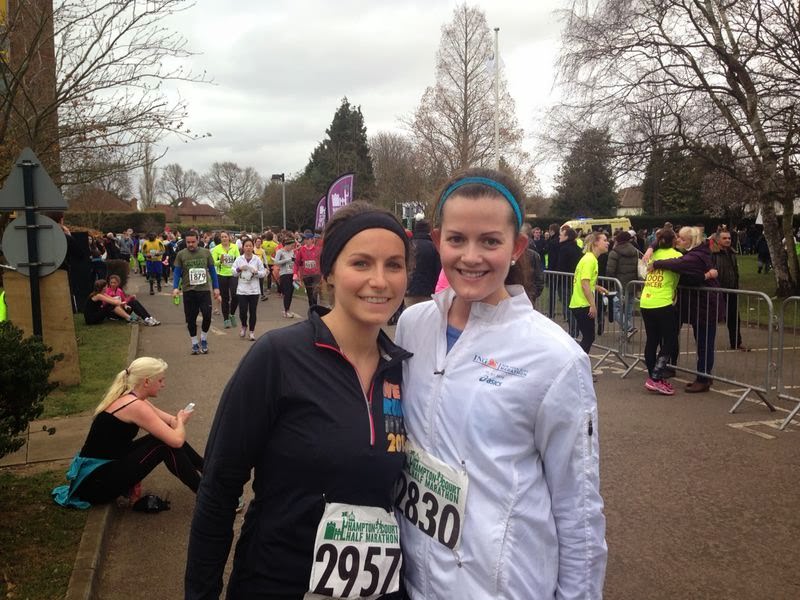 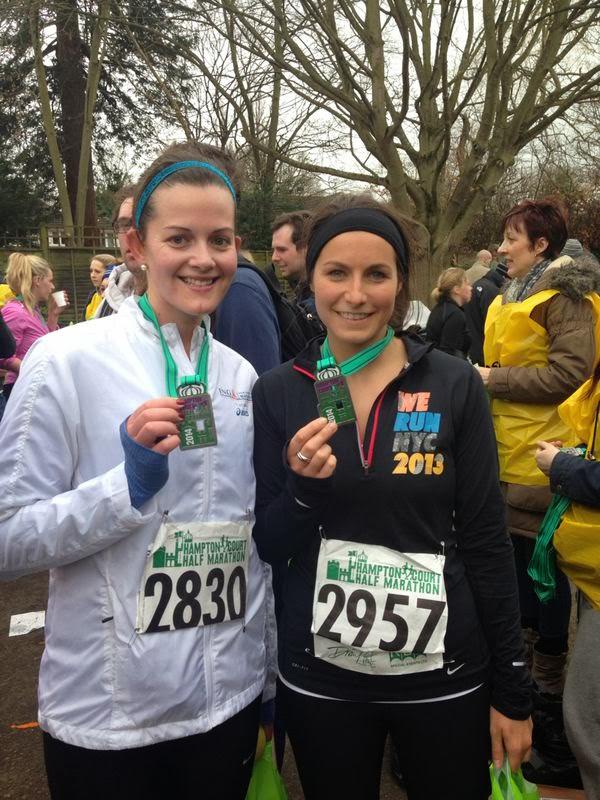 Rather than having the medals, water and goodie bags ready when you crossed the finish line, we had to queue up for them at the end. This was a bit annoying, but meant we could stock up on fruit and admire our heavy bit of bling. Another gripe was that the bags that we’d checked in that morning with tags corresponding to our bib number had all been left out on the floor of the hall for people to collect – not exactly ideal when I had my purse, keys etc in my bag. Isn’t that the point of bag check? 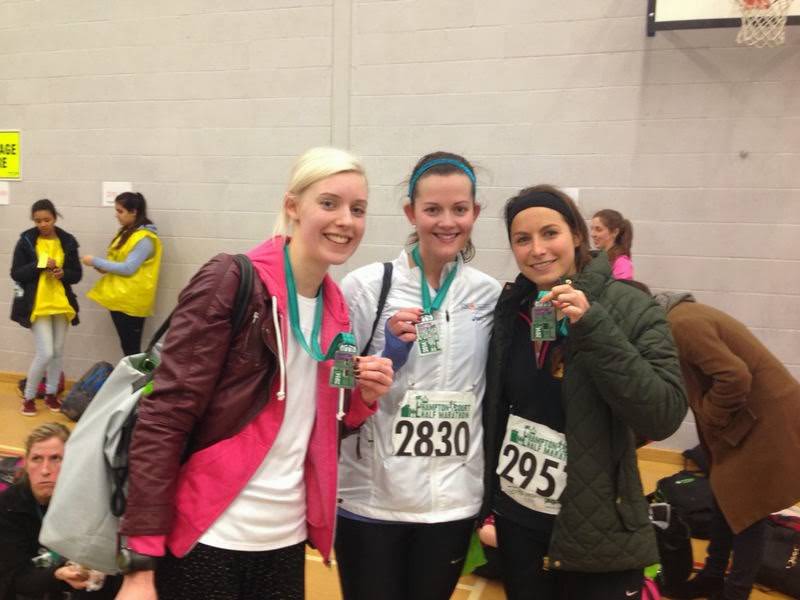 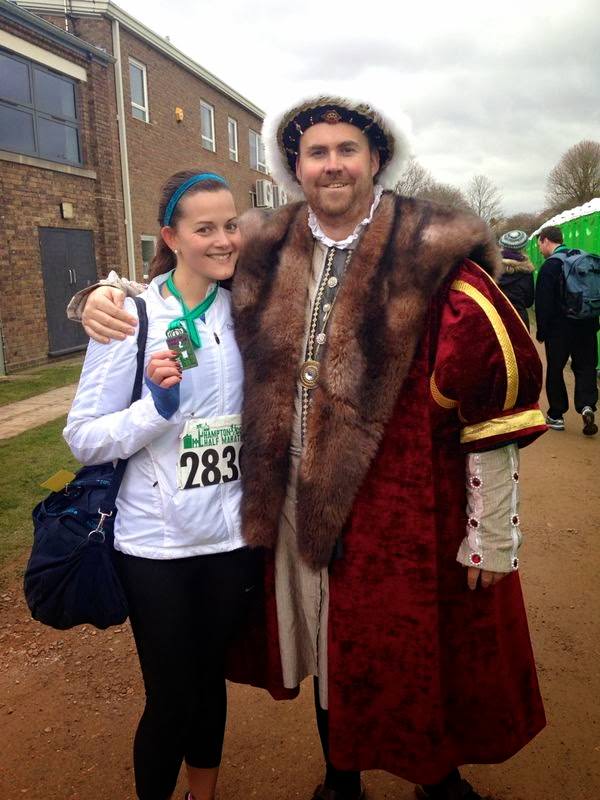 But we did get a photo with Henry VIII!

Overall, I have to say that I think that the Hampton Court Half organisers have some things to work on for next year’s race; the course length, timings (many of the trains/buses didn’t get in early enough, perhaps the race could start later next time) and the queues. I don’t know whether they gave out too many bibs for their infrastructure, but it just felt crowded at all points throughout the morning. However, I do think they did a great job ensuring the race went ahead after a lot of flooding in the area over the previous few weeks. It’s a great training run for a Spring marathon, however not a PB race…yet.

Thank you to Hampton Court Half marathon for letting me get a place at the last minute!