Over the last couple of months, I’ve made some lovely friends and had the chance to attend some great events all because of Twitter. This morning, the event was the Gloanna Yoga Run- a 5K run, followed by a yoga class and brunch (sounds ideal, right?).

Over Twitter, a group of us had managed to sign up for the same start time- the first run of the day, 9am. This ended up being a great decision, as we didn’t have to wait in the rain to sign in, or after the run before the yoga class.

I arrived about half an hour before our start time, signed in and collected my t-shirt. I never know what size to go for when it comes to race t-shirts, they’re usually too big or too small. On this occasion, they were pretty snug and I was glad to be able to switch my medium for a large.  Although it’s a cotton top, it’s actually a really nice t-shirt, and I’ll definitely wear it again. 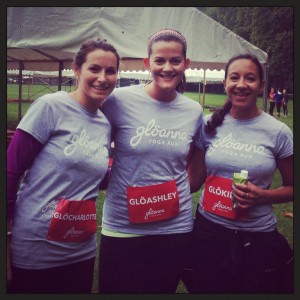 It was such a nice touch to have our names rather than number on our race bibs. Sadly we didn’t get a large group photo but I ran with these lovely ladies, Ashley and Kiera, and Leah (who is trying to stave off an injury at the moment) skipped the run but took part in the yoga class, as well as bumping into the Lululemon ladies, Becca and Lorna. 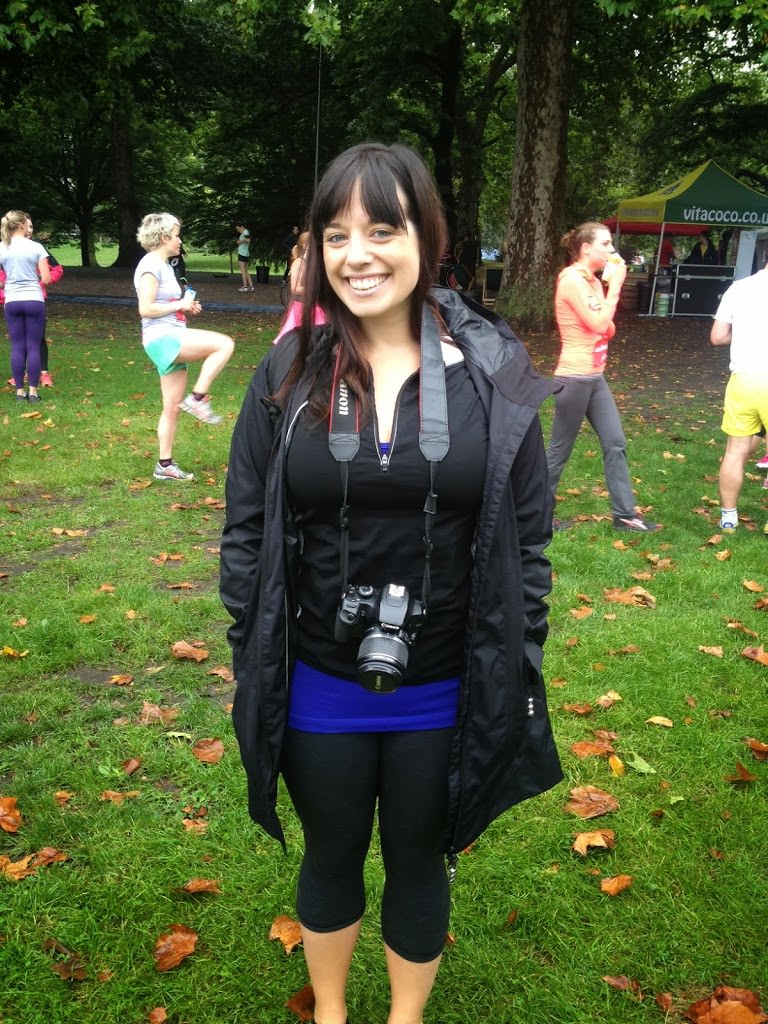 After a brief warm up, we all did a shot of Prosecco (at 9am) before heading out on the run. It was a two lap route around Battersea Park, for a total of 5K. We took it pretty easy, chatting as we ran rather than keeping a pace. The volunteers on the course were lovely, and so encouraging despite the rain.

Following the run, we were split into two yoga tents, one for beginners, and another for intermediate/advanced. I’d signed up for the beginners class (I can’t touch my toes!) but the girls convinced me to join them in the intermediate/advanced group. I was terrible, especially compared to Ashley, who looked super strong and flexi! 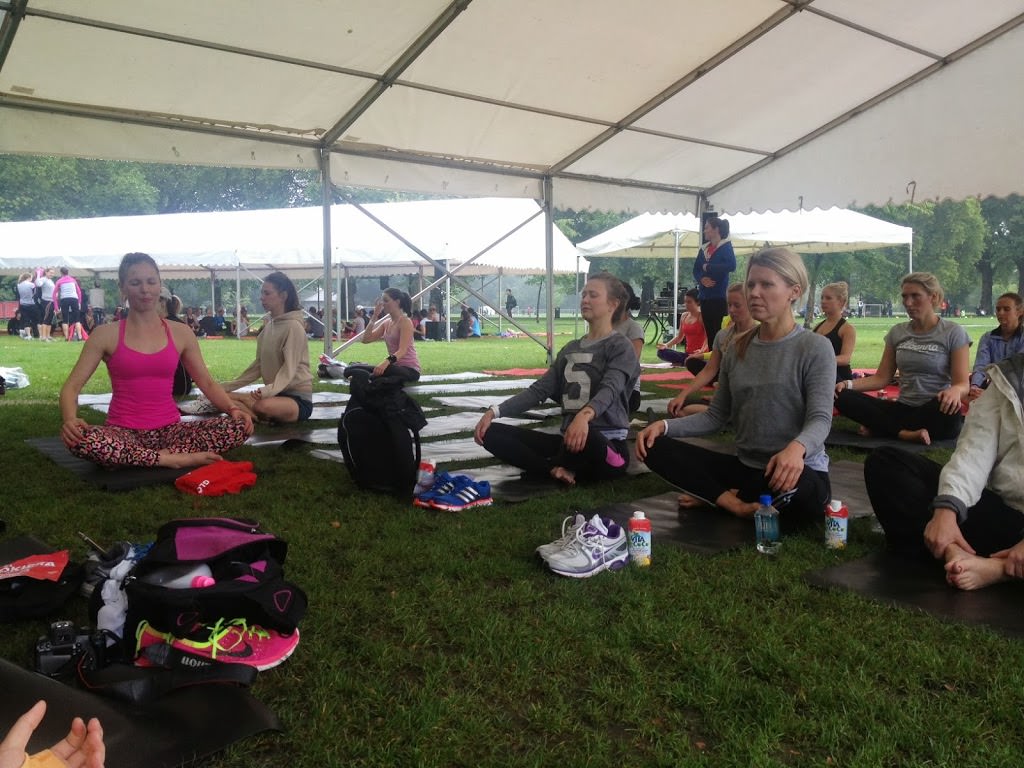 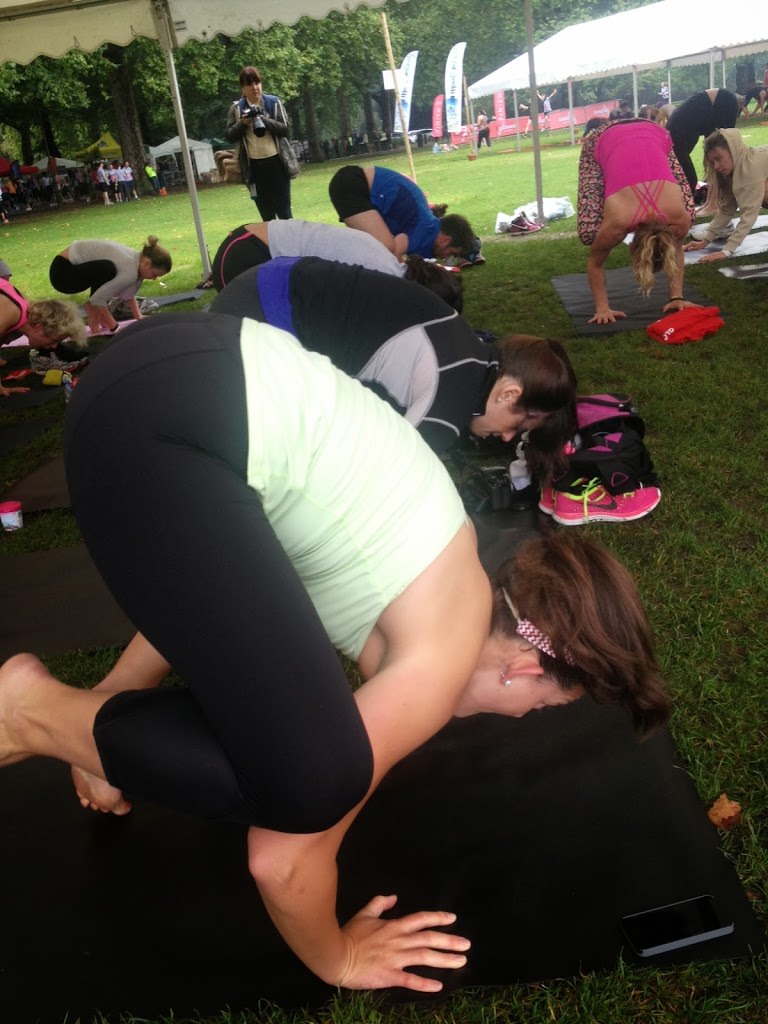 There were a LOT of chatarangas, which really tested my upper body strength and core, and I really struggled with some of the more advanced moves. Luckily, I wasn’t the only beginner that had sneaked into the advanced tent- you can just make out Liz in child’s pose next to the other Lululemon ladies! I don’t think I’ll ever become a yogi! 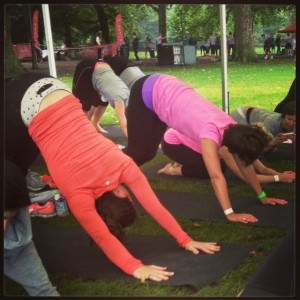 We were lucky to be in the first yoga class, as the 9.30 run group were waiting for a while in the rain for us to finish our class, and I can imagine this had a knock on effect throughout the morning. Additionally, Becca said that she had to wait nearly an hour to check in and collect her bib and t-shirt! Gloanna Yoga Run was a great way to spend a wet Saturday morning, especially followed by Prosecco, Vita Coco, Sushi and bounce balls. We did get a little wet however, and it would have been great if there’d been another tent for us to socialise in!

I was supposed to be running 13 miles before Gloanna, but for various reasons, including 3 hours sleep on Weds night, that just didn’t happen. Listening to my body, it just needed a shake out run and stretch, so Gloanna was the perfect solution!

What are your feelings towards yoga? Love it? Hate it? Don’t mind?