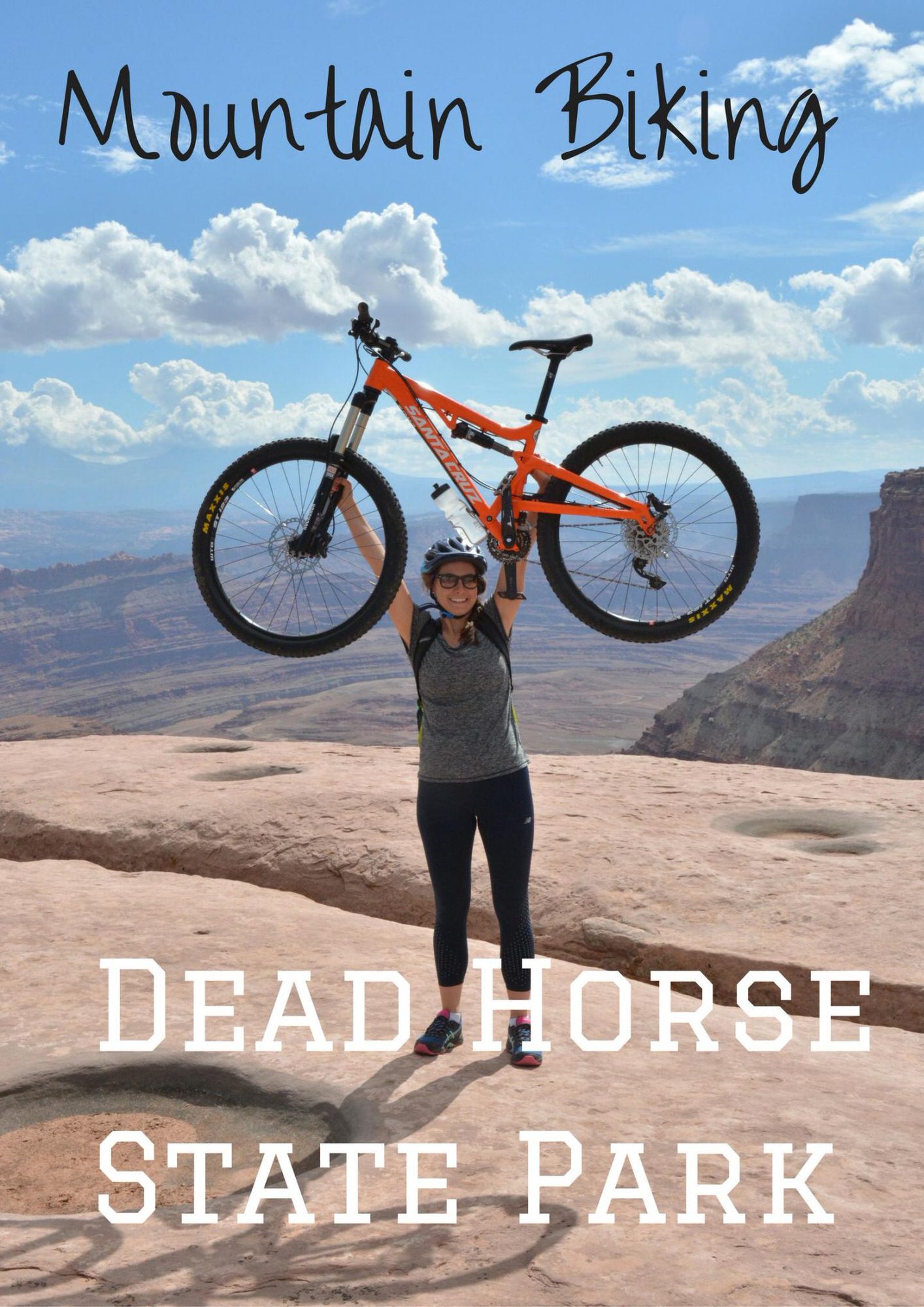 Moab is a hub of outdoor activity, with running, walking and biking trails, rafting, standup paddle boarding, base jumping – pretty much anything that increases your heart rate and gets that adrenaline pumping, and you can do it in here.

When researching the trip, I thought that a bike tour would be a fun way to explore Dead Horse State Park, although I definitely didn’t put two and two together with the trails and biking…of course it was going to be MOUNTAIN BIKING. 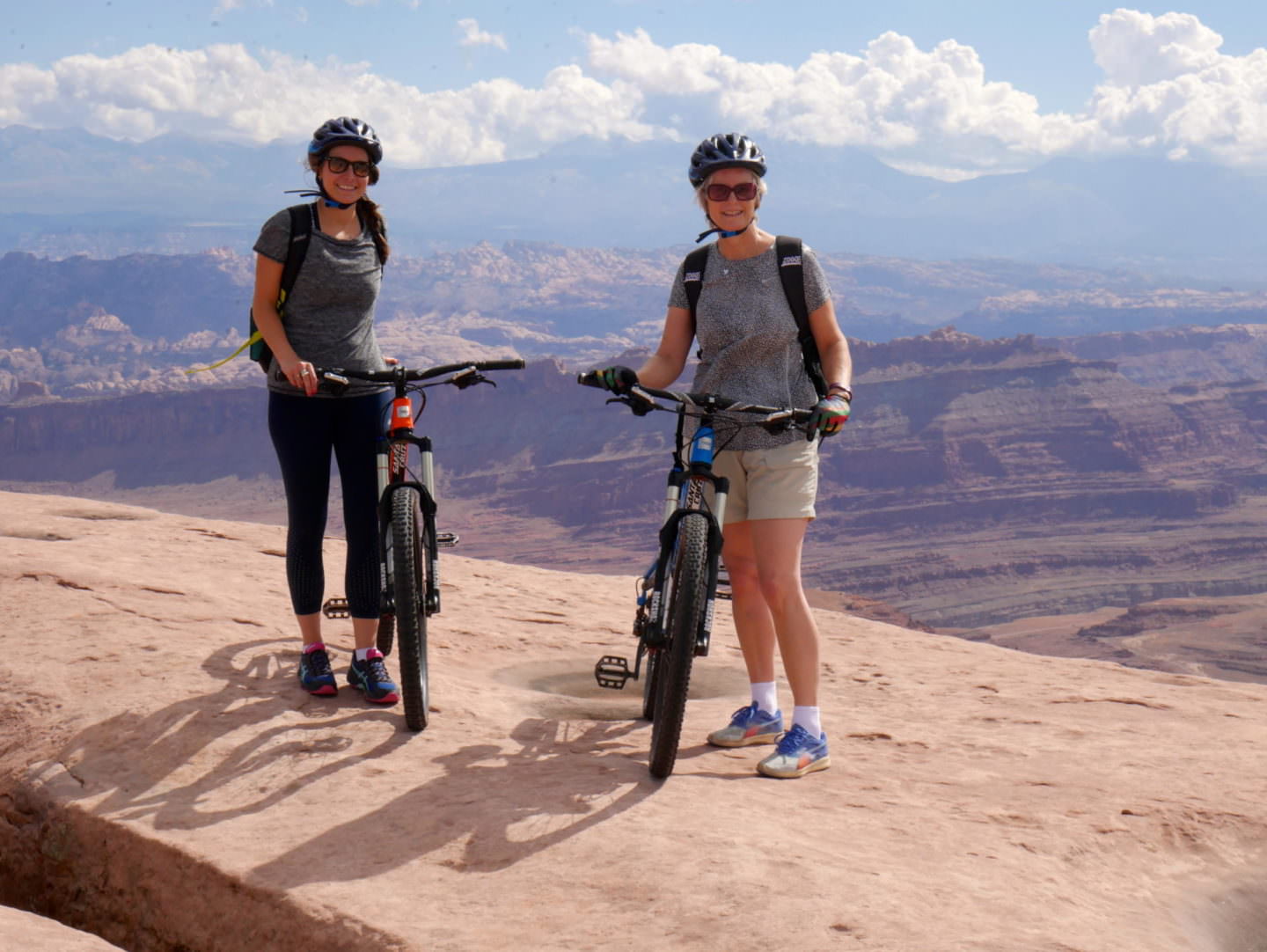 Our group of mixed ability met just after 8am, and chatted nervously with our lovely guide, Marlie, from Rim Tours. Between the six of us, two were experienced doer ad cyclists, a very sporty couple who had tried their hand at mountain biking a couple of times, and my Mum and I who had never tackled anything like this before.

The first stop was to see the infamous overlook at Dead Horse Point seen in the photo below.

Did you know Dead Horse State Park is actually the site of the final scene from the Thelma & Louise film (spoiler alert- you know where they drive off the cliff), there’s even an old car left in the spot where they filmed it. 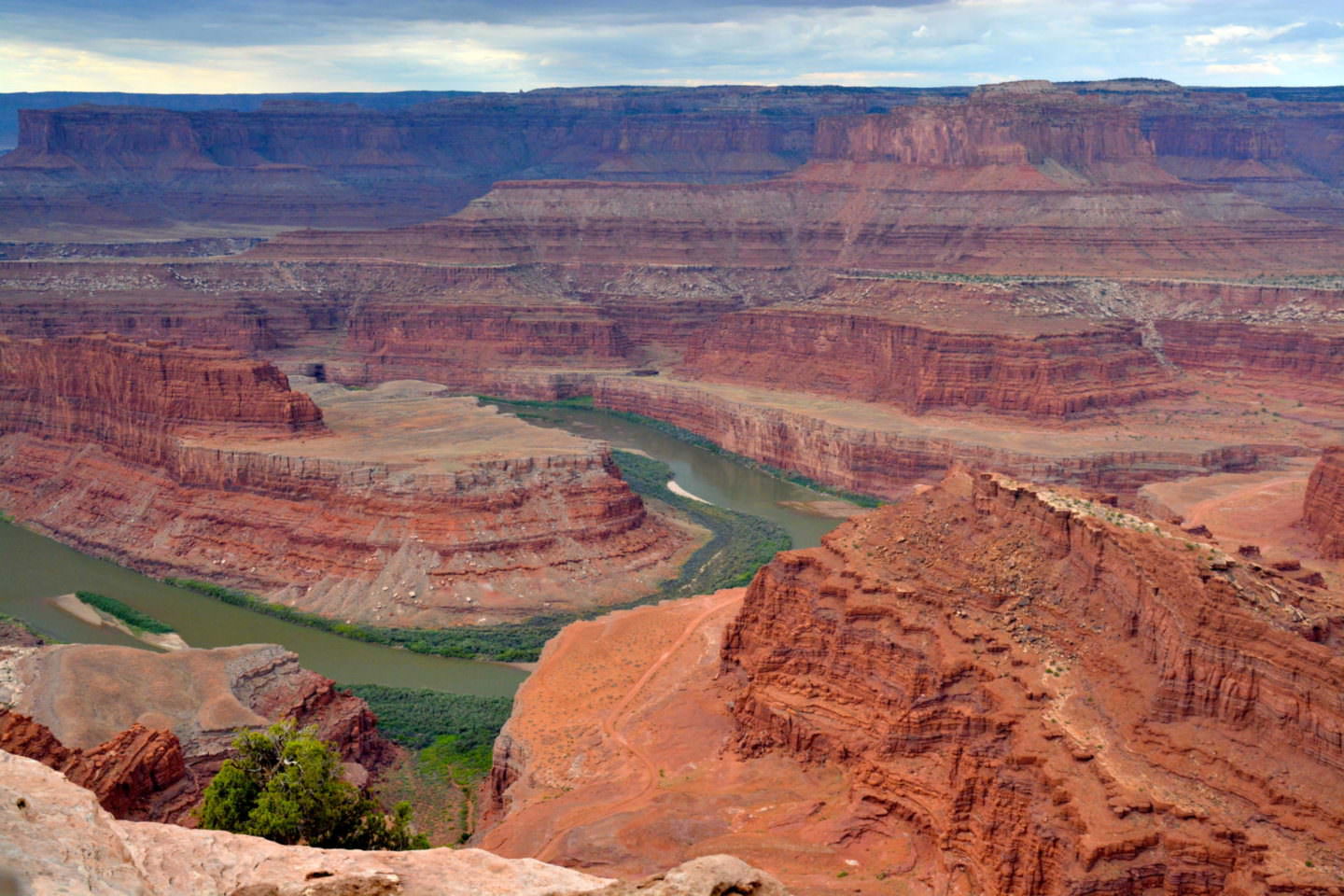 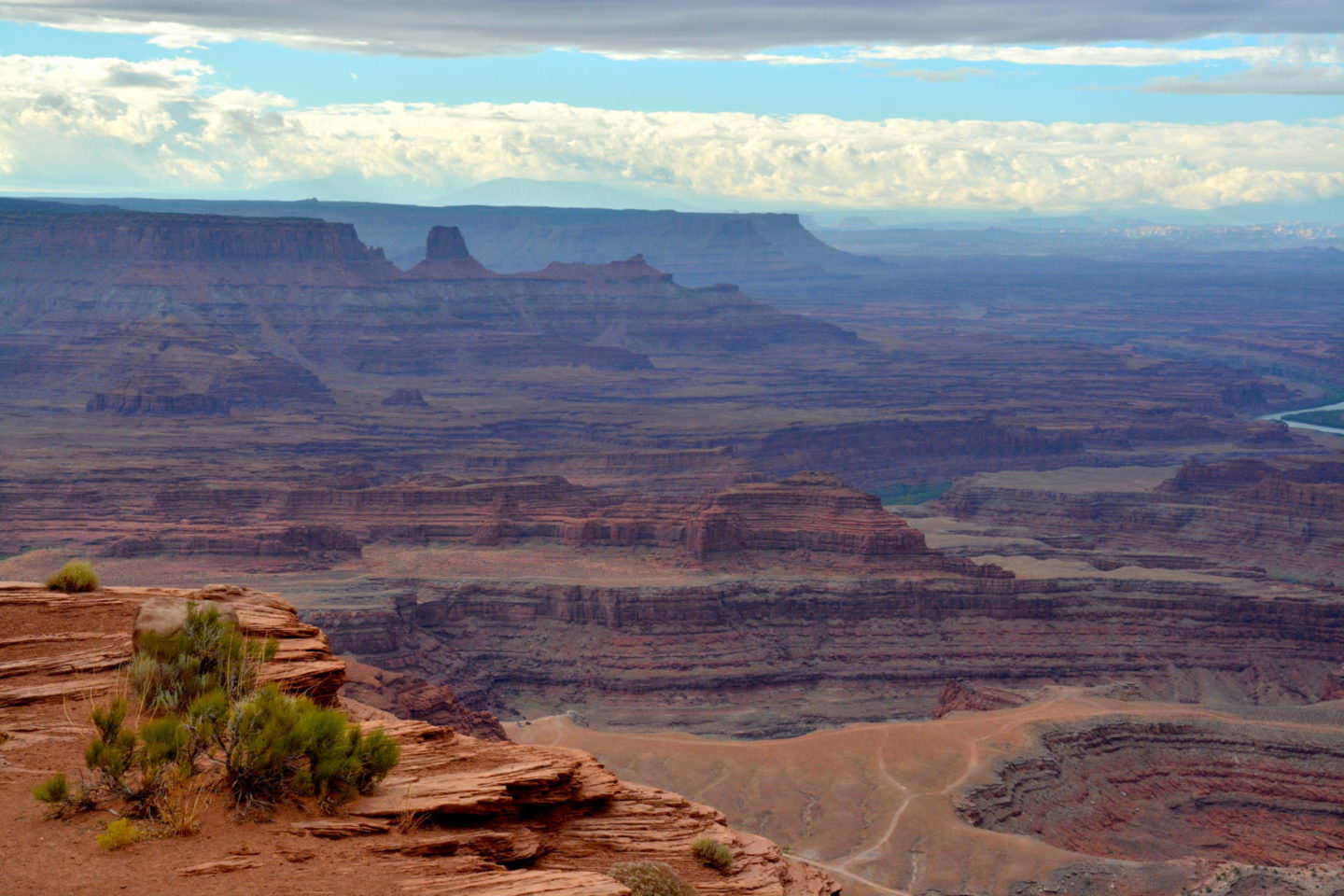 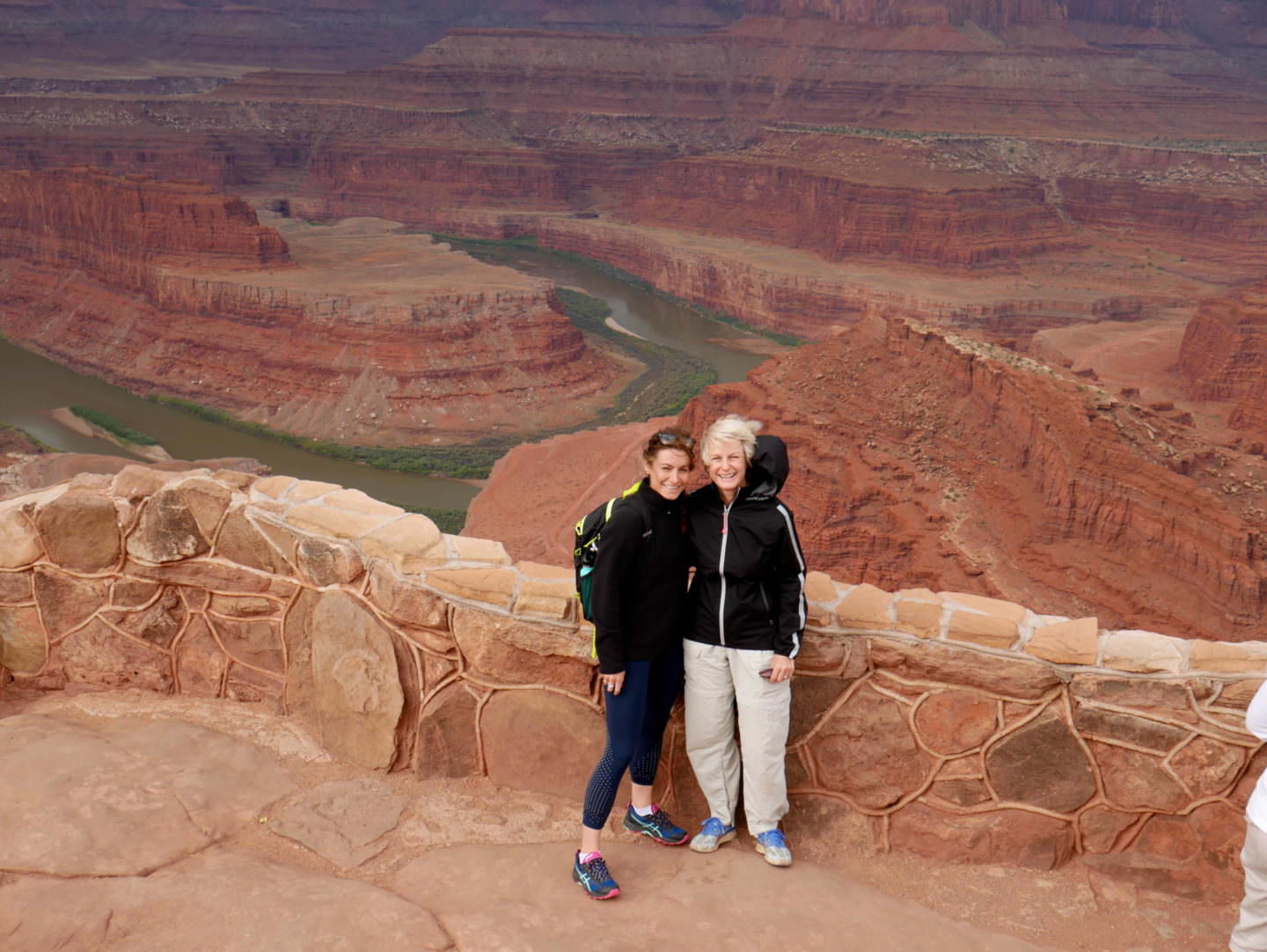 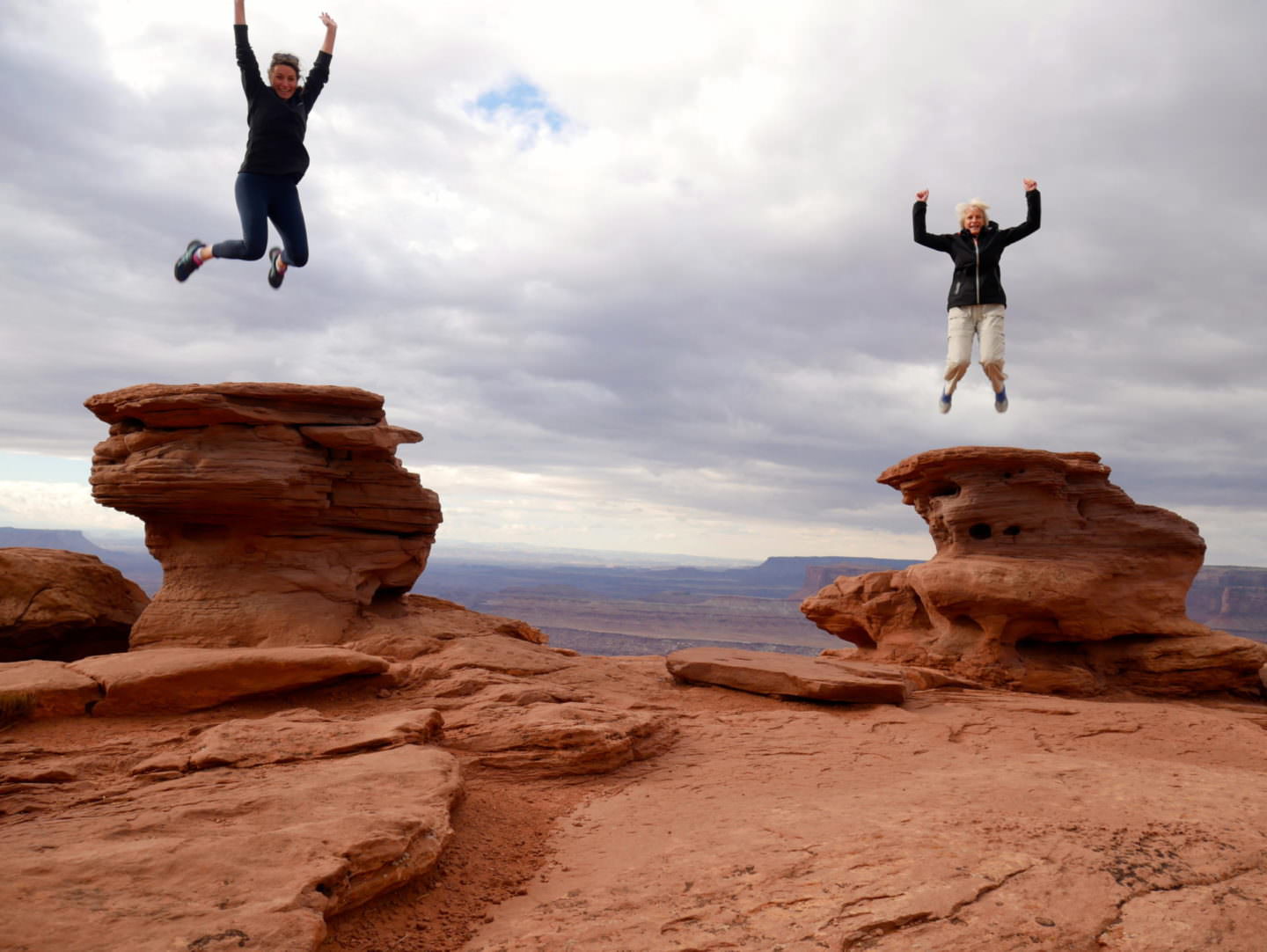 After a quick safety briefing and a look at the route map, we hit the trail. We were on a loop of paths called The Intrepid Trail System, the most technical of which is the Big Chief. These are supposed to be some of the easiest mountain biking routes in Moab, although they were technical enough for us. These routes are well signposted and marked out with branches, rocks and logs.

Within minutes one of the group, Eileen, had attempted a steep incline and flipped over her handlebars. Luckily she wasn’t hurt but it was enough to shake the rest of the girls in the group, and reaffirmed that we wanted to avoid getting hurt at all costs, especially so early on in our holiday. 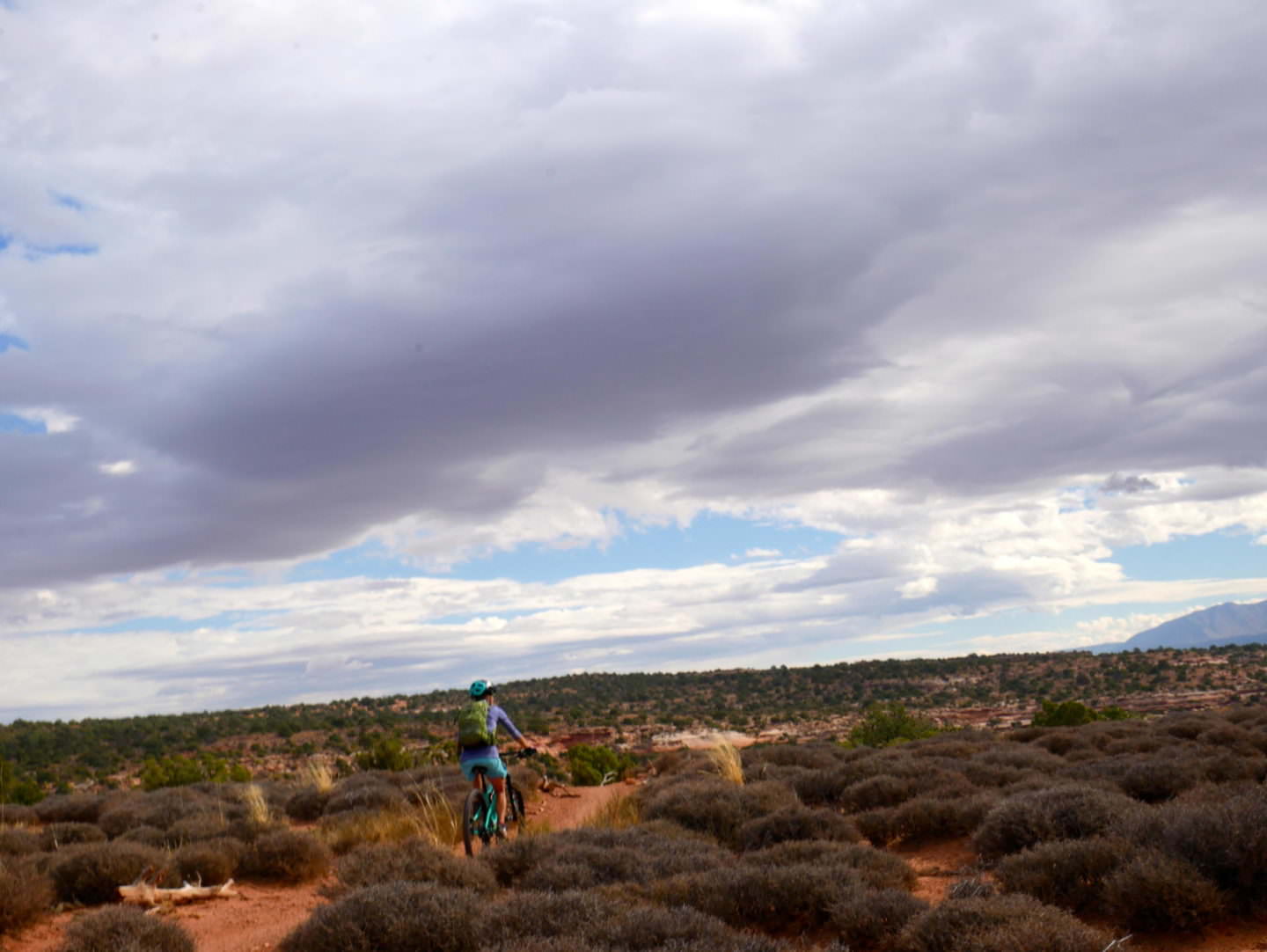 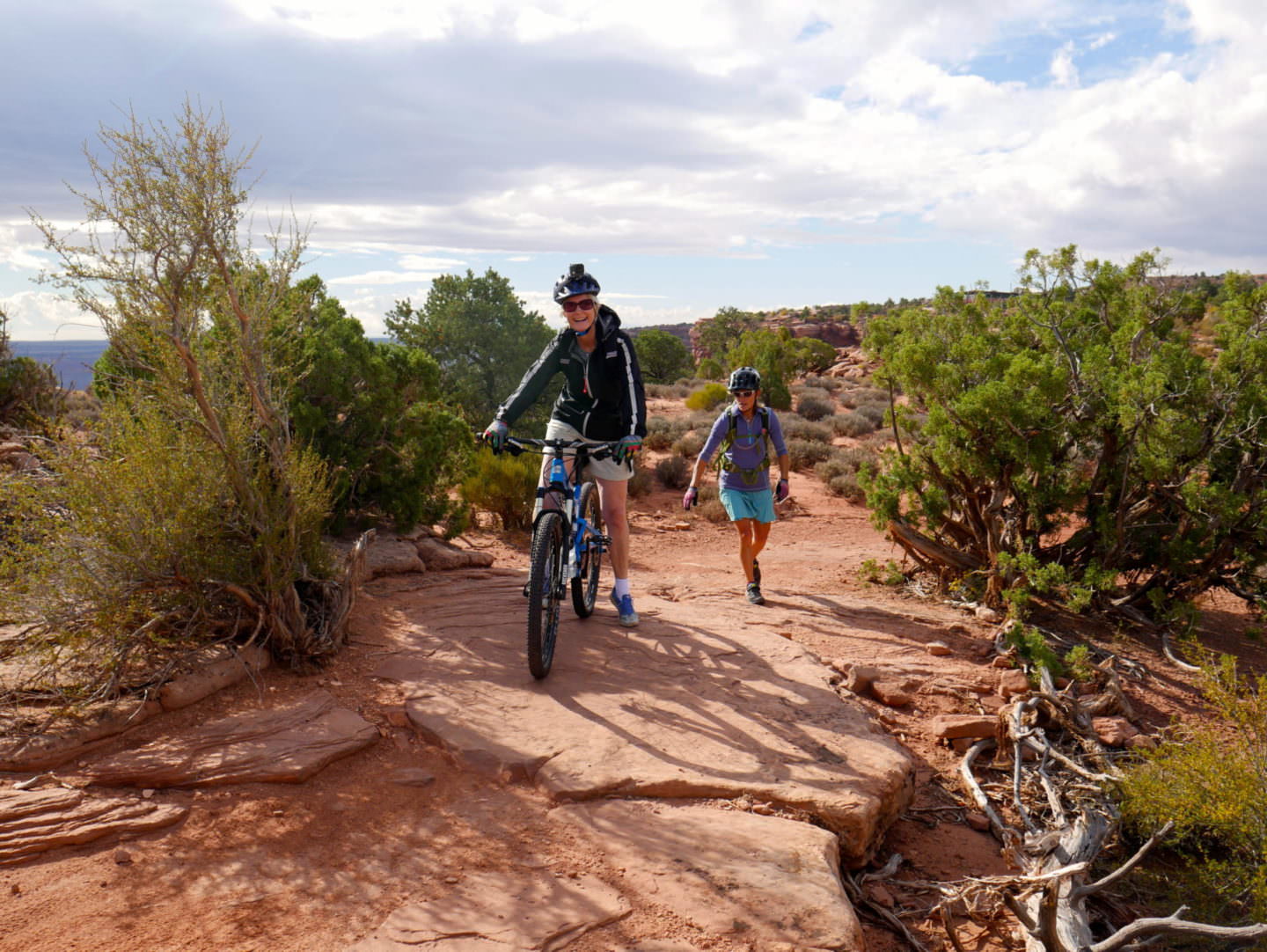 Marlie would warn us when there was a particularly tough incline or ‘gnarly’ descent, and give us tips to ride it safely. If we didn’t quite make it, or felt too nervous to attempt it, we were always given the option to walk it, which I did a few times!

There were also various view points where we stopped for photos of the incredible panoramic vistas. The parks here are just so vast! 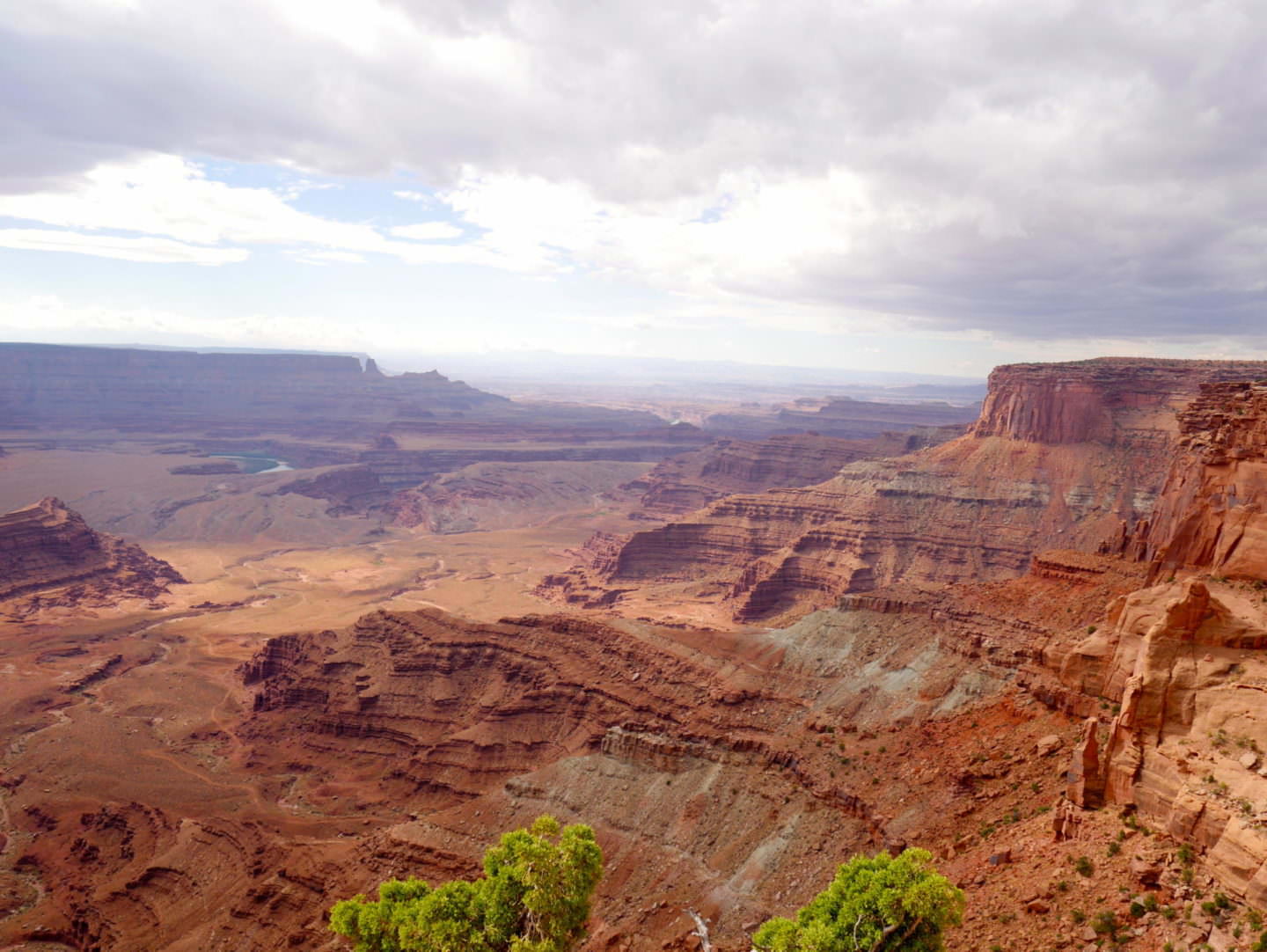 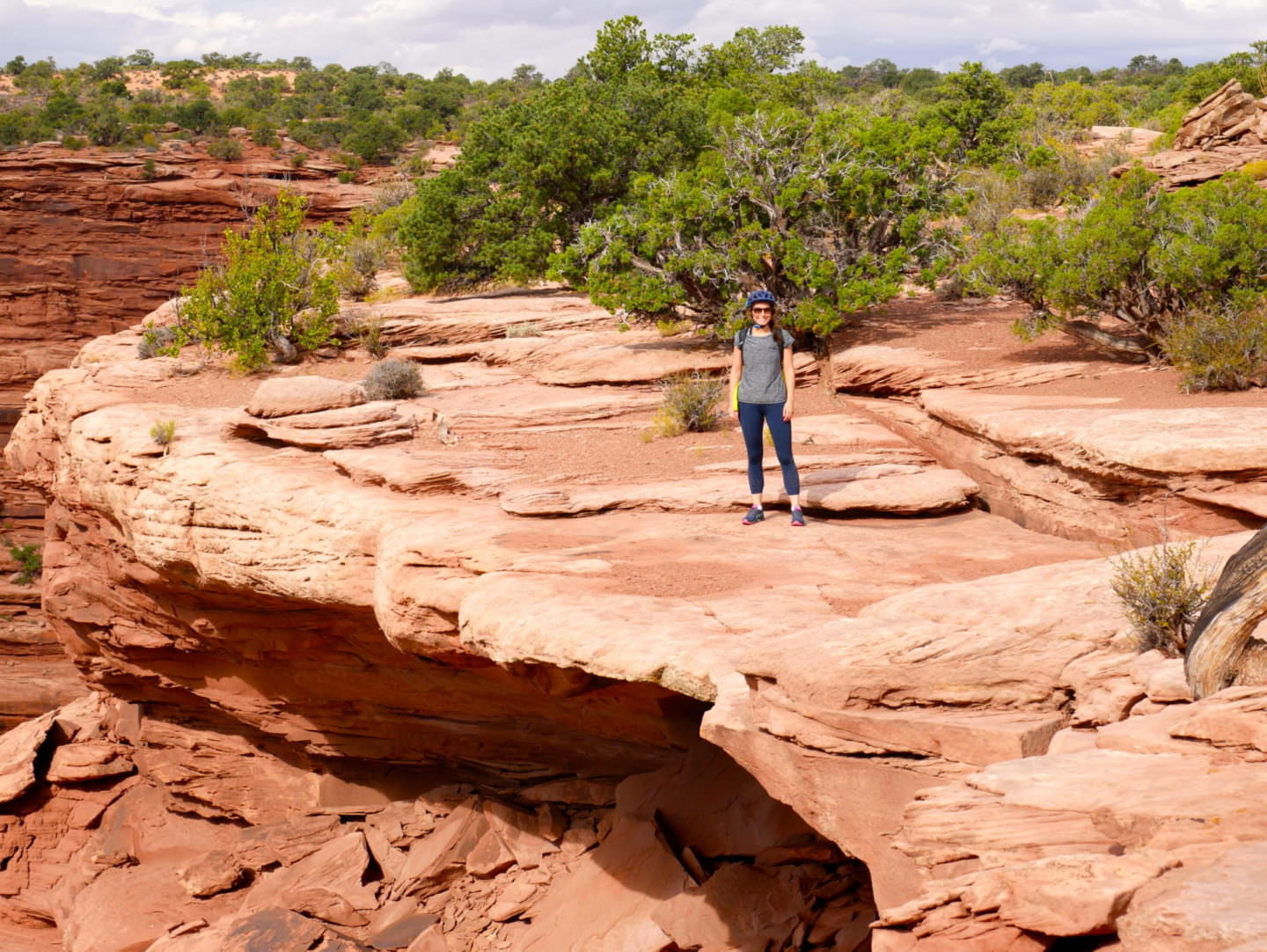 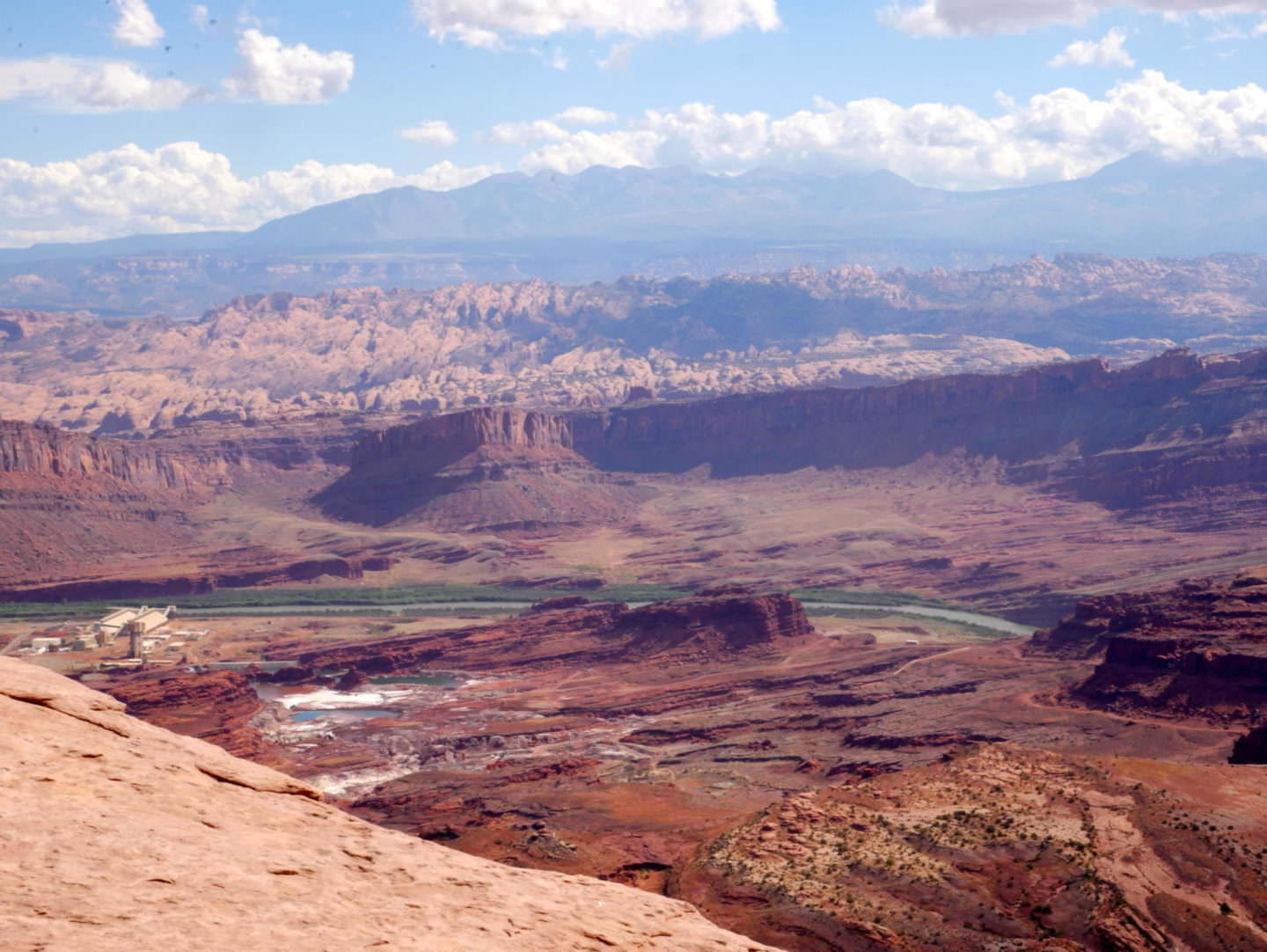 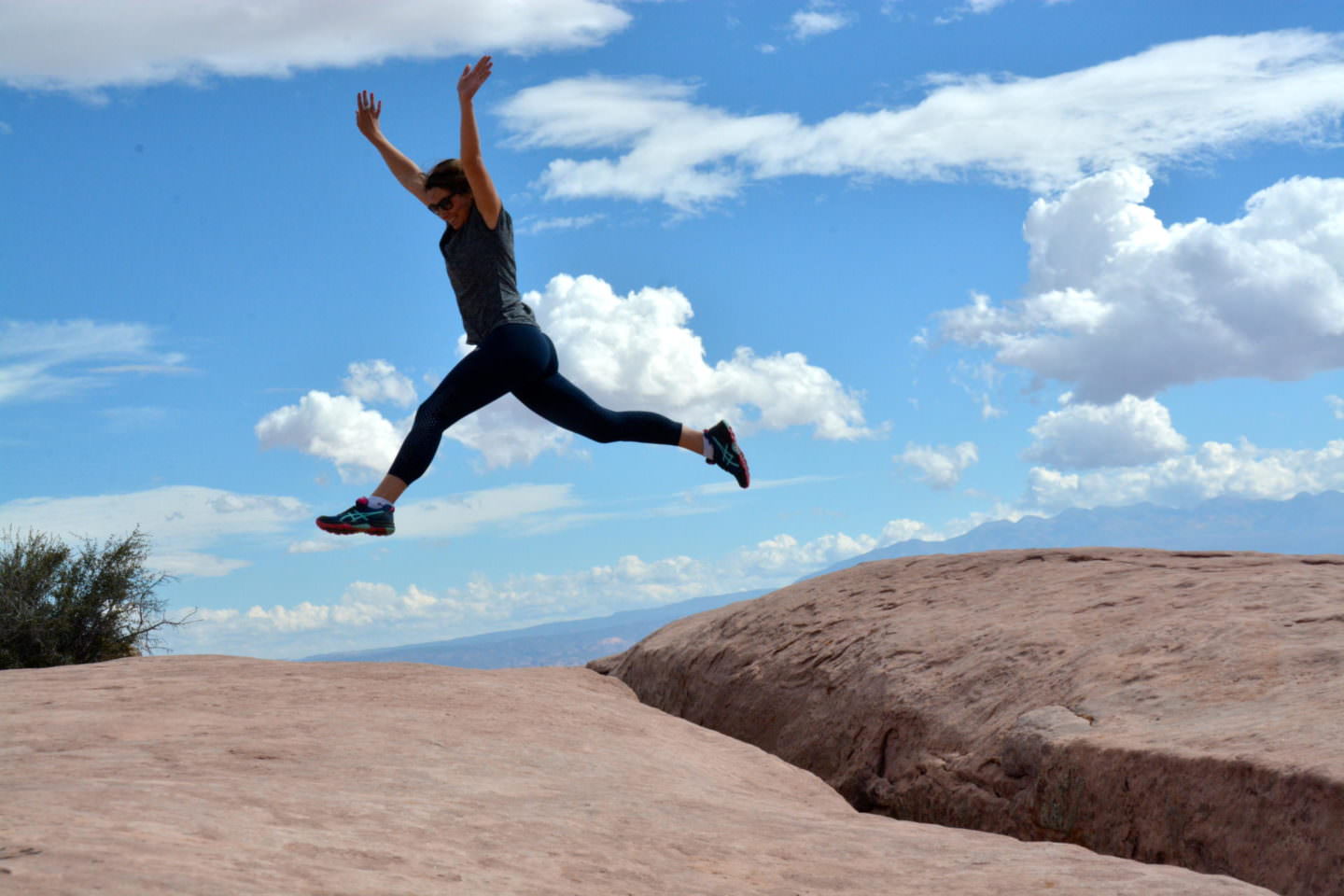 At nearly 8000ft, you could feel the lack of oxygen in the air, I was huffing and puffing on the uphills! It was definitely hard work. It took a lot of concentration to stay on the bike, and a lot of trust in the bike that it would actually ride over the rocks, tree roots and through the sand. However, by the second part of the ride, I felt like my confidence was growing, as was my ‘skill’.

It was a real adrenaline buzz, especially at times riding fairly near the edge of the canyon. I can completely understand the thrill that many people get from mountain biking, and would love to give it another go, although I think I might need a little more training and to get back to beginner trails. 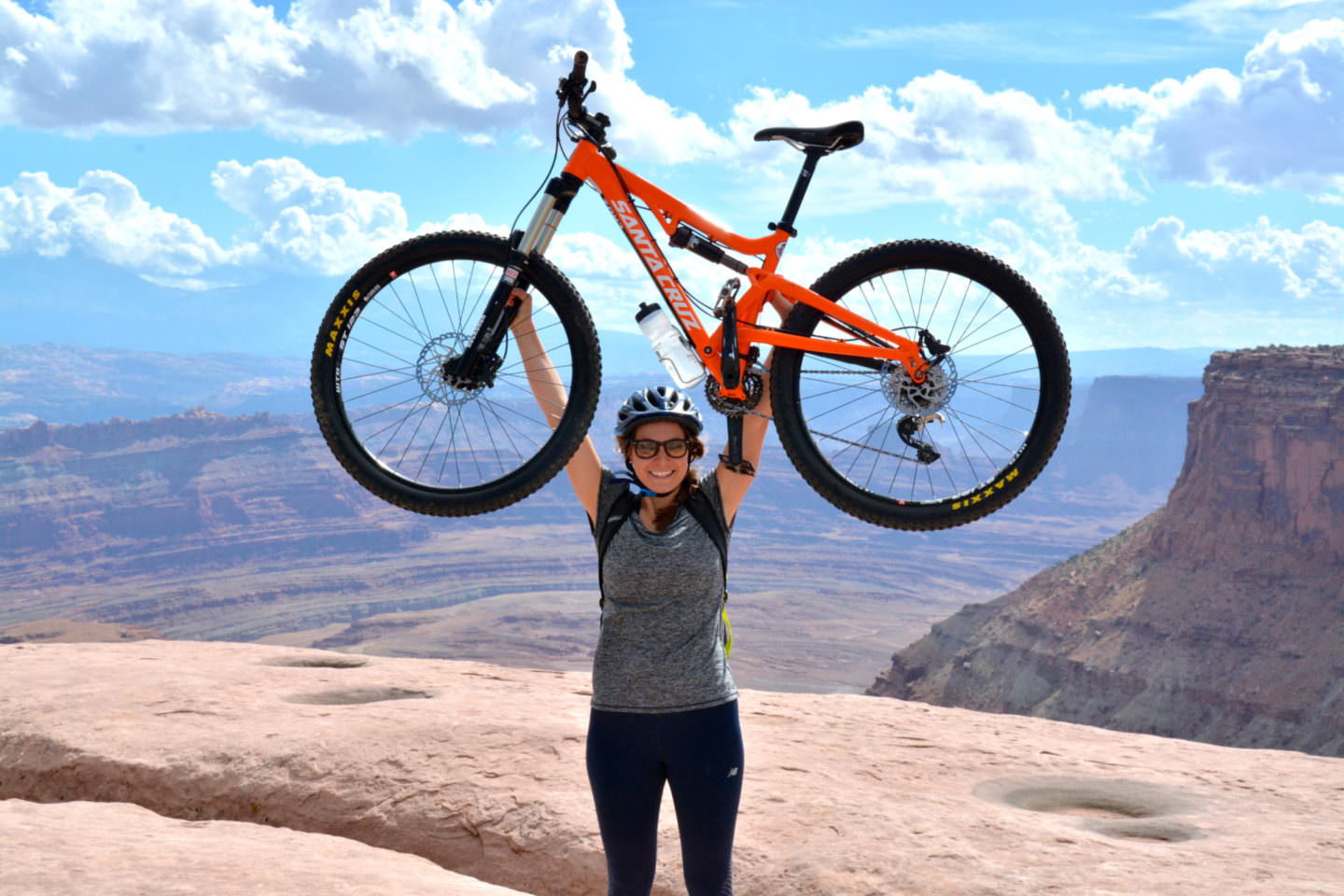 Anyone have any recommendations for mountain biking schools in the UK or very easy trails?