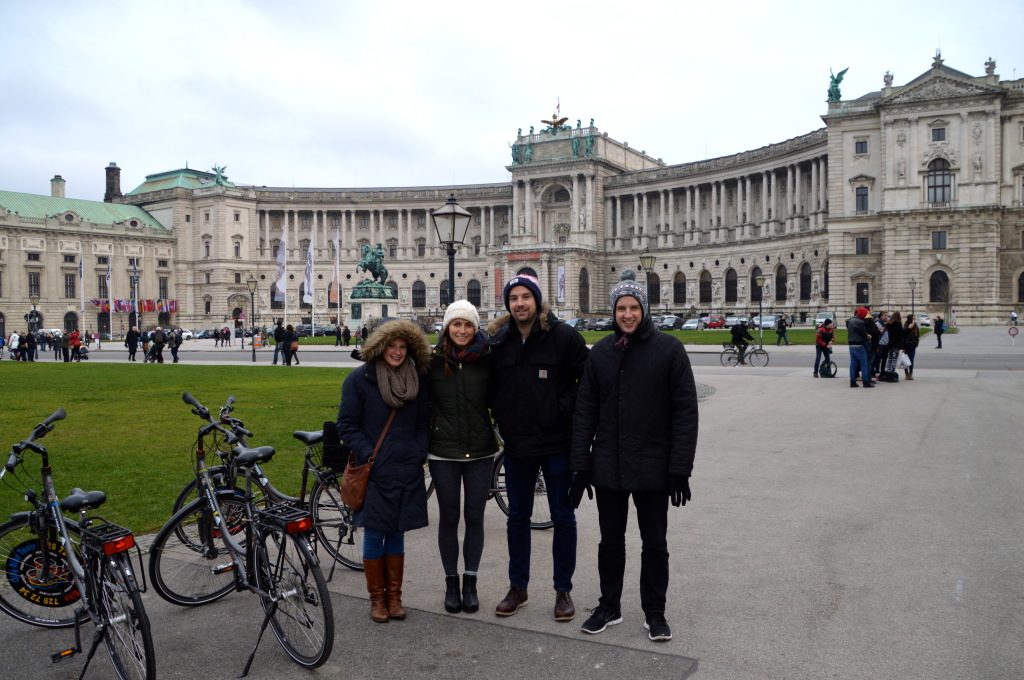 One of the highlights of our weekend in Vienna was the 3hr cycling tour we organised with Pedal Power. They don’t run group tours outside of the Spring and Summer months, so we booked a private tour for four of us, requesting at least one cake and coffee stop en route (I think they thought we were joking!). As it was our first time in Vienna, we asked for a tour of the main sights, the ‘must see’ attractions so that we could get our bearings and decide which destinations to return to over the weekend.

I’d sent over our heights in advance, so getting our bikes hooked up was a quick process, with baskets for our bags (helmets were optional and most of the tour was on cycle paths). First stop was the Art History and Natural History Museums, built in 1880 these impressive buildings are designed to look much older. The Natural History Museum actually houses the largest collection of meteorites in the world. Outside these galleries is a statue of Marie Theresa, the longest ruling female Monach, and mother to 16 children, including Marie Antoinette. 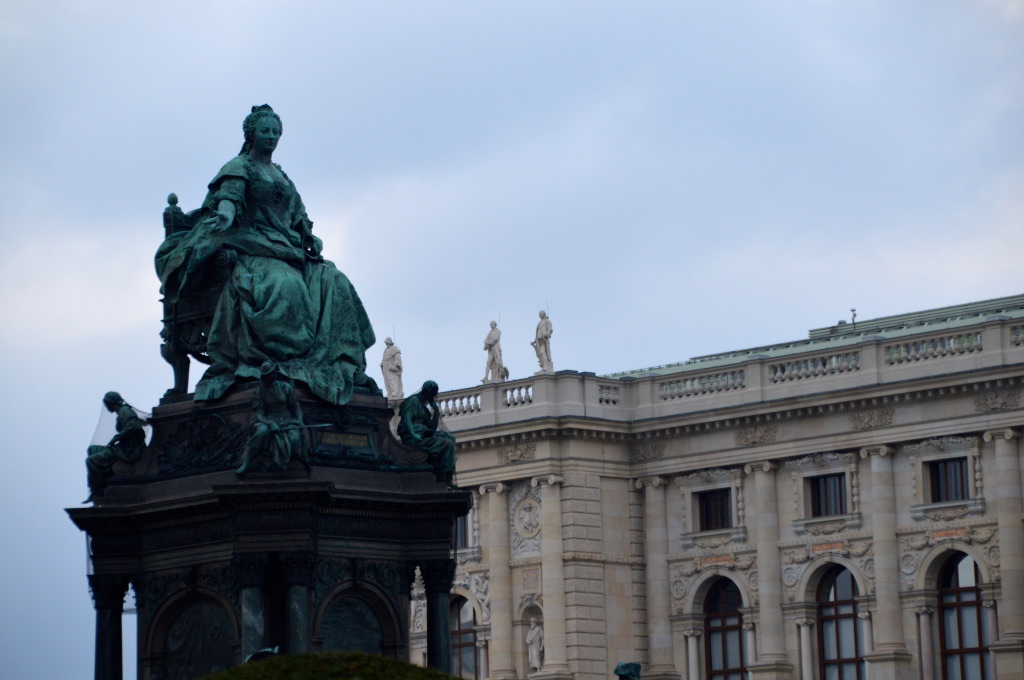 From this view point, we could also see the air defence that protected Vienna during the Second World War (just a 5th of the city was bombed). These huge concrete towers are too strong to be destroyed, as they would damage too much around them if they were demolished. The British fighter jets couldn’t reach Vienna due to it’s distance from the UK, and the defence was strong when the US attacked from Italy. Any war damage that did happen is obvious however, as you can clearly see the different ages and genres of the buildings-pre and post war. 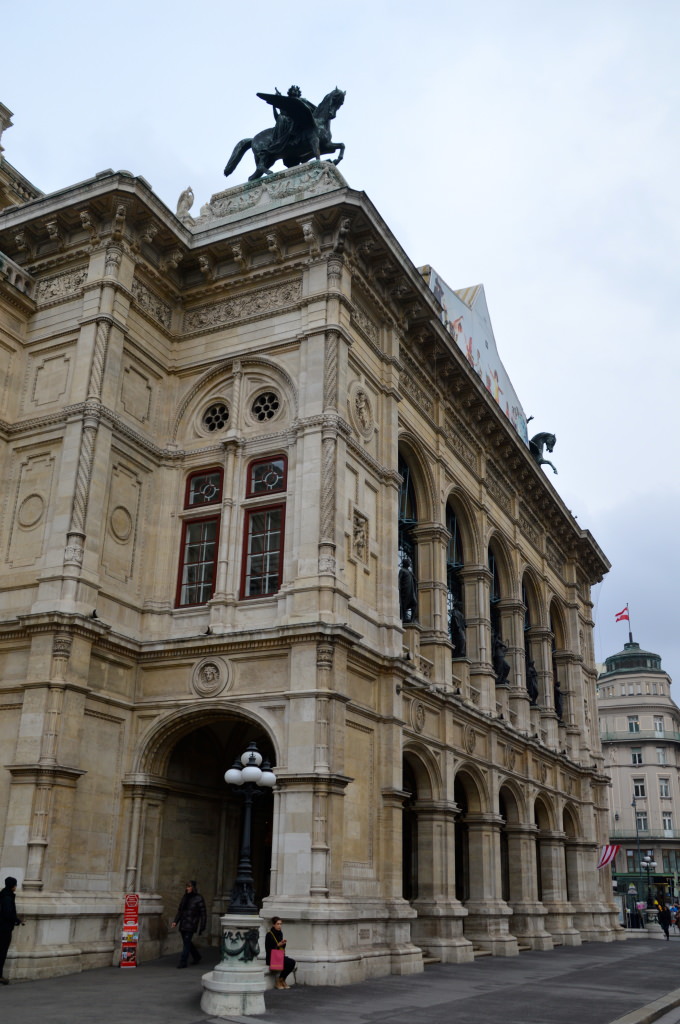 Interesting fact about the Opera House- the ground floor is shorter than the second floor after the government raised the level of the road surface when building the ring road. You can buy standing tickets to the Opera for 3.50 euros- well worth it if you are going to Vienna- you can always sneak out halfway through!

The Palace is beautiful, and huge. Each reigning emperor built an extra wing to avoid having to sleep in the same wing as the previous ruler. This is where Hitler gave his infamous speeches to the Austrian people, on the lawn infront of the Palace. Part of it has now been turned into a large public library. Sadly we didn’t get a chance to go inside, or to attend one of the Spanish Riding School performances. The horses stables are attached to the palace, and are well worth a look! 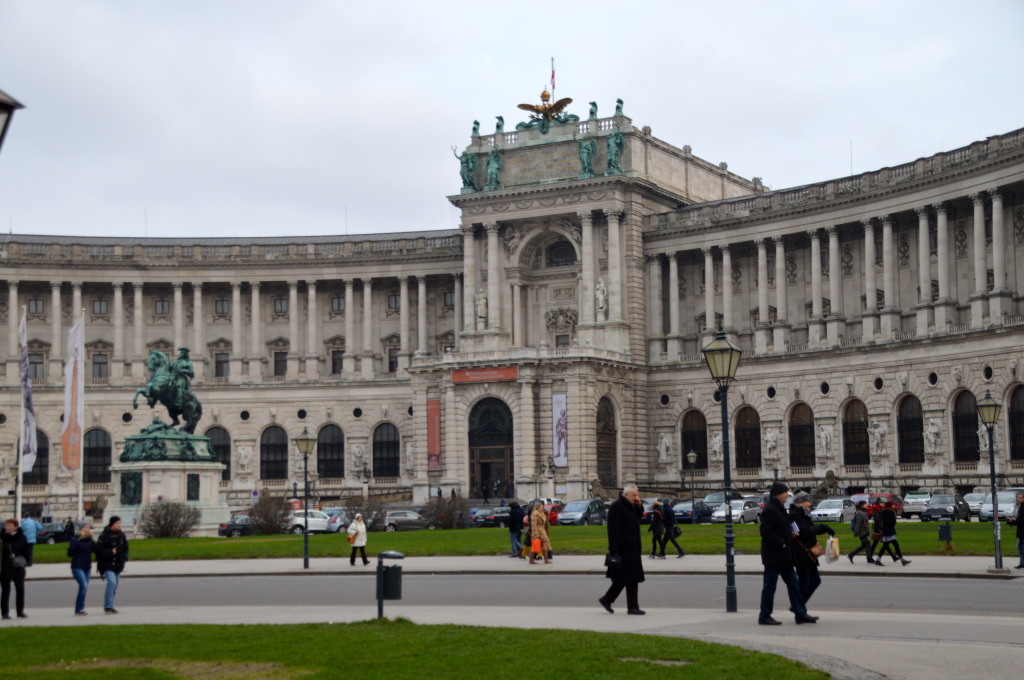 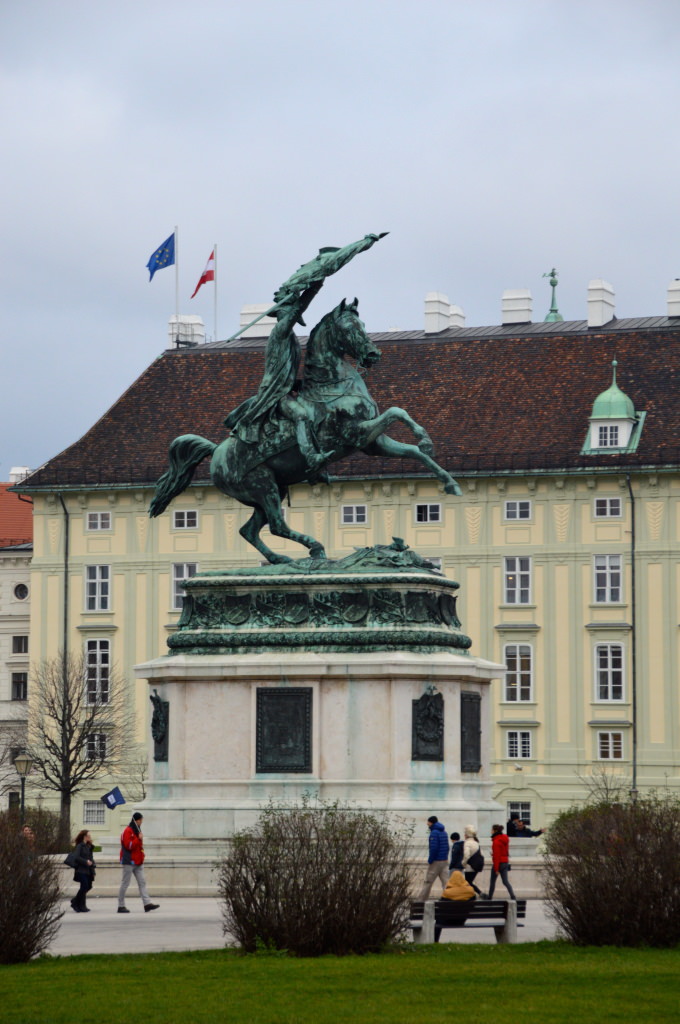 Next up was a visit to Parliament and the Town Hall. The Parliament building design is based on the Pantheon whilst we all thought that the Town Hall reminded us of Hogwarts when it was all lit up. In front of the Town Hall is one of the biggest Christmas markets, however in my opinion, it was one of the tackiest and busiest- maybe one to miss! 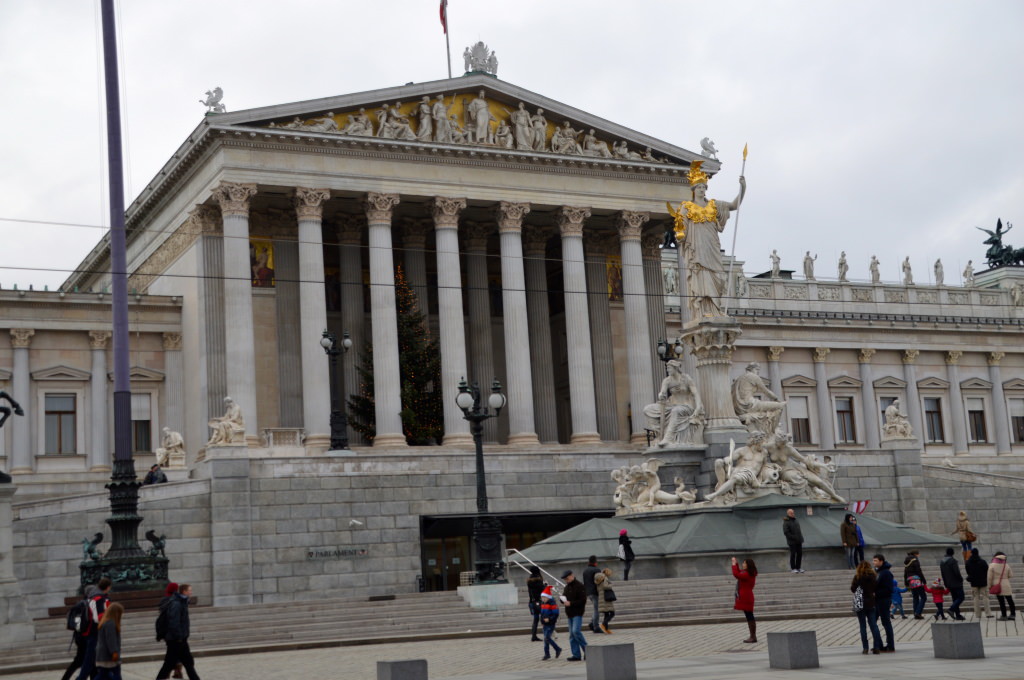 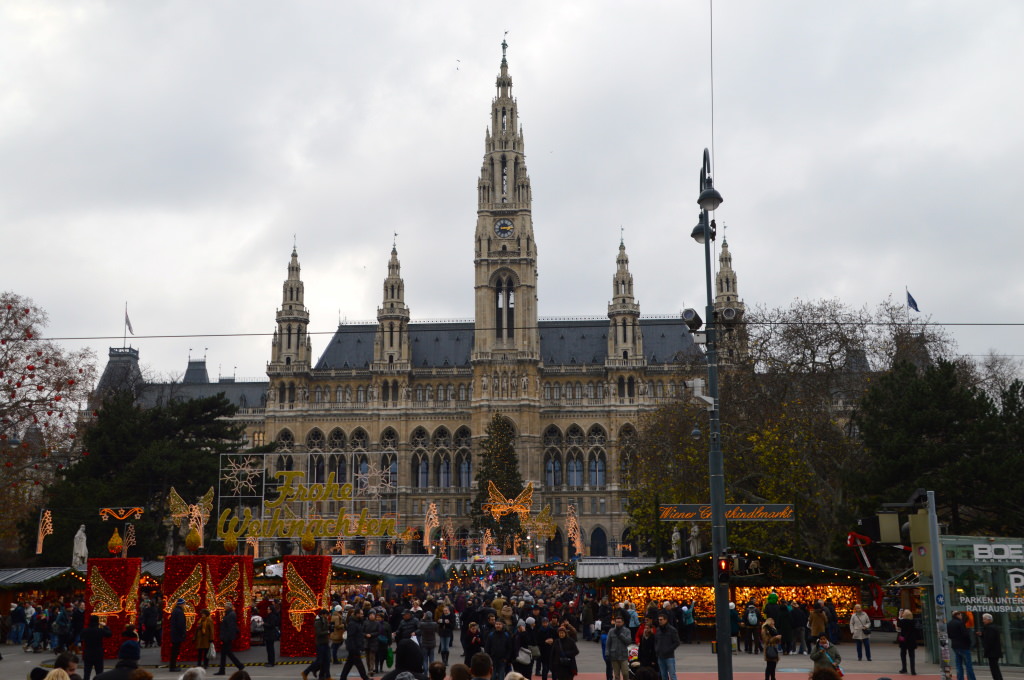 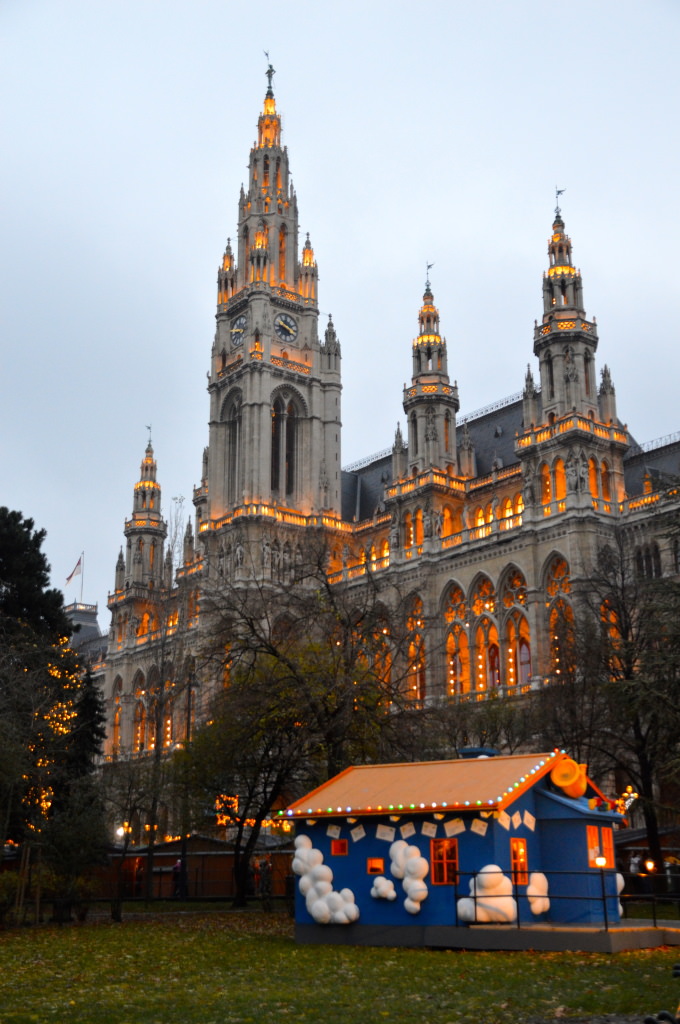 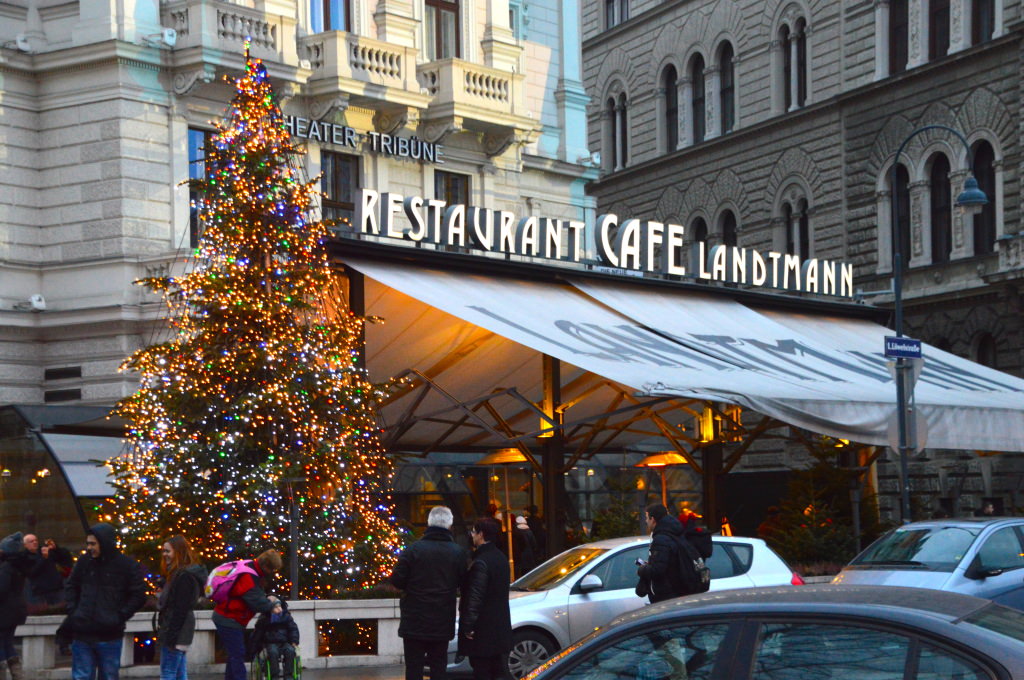 By this point in the tour, we were all beginning to feel the cold and were ready for a coffee and cake stop. Luckily there was a famous coffee house nearby where Sigmund Freud used to frequent while teaching at the local University. Our guide warned us that it was quite posh, what he really meant was ‘it will cost you 55 euros for 5 coffees and 5 pieces of cake’. It was worth it.

We all brightened up considerably after our cakes, and pedaled onward with gusto towards St Stephen’s Cathedral. It felt truly magical, and although we didn’t have a chance to go inside at the time, we decided it was worth a trip back the following day to explore the Cathedral properly and take the lift up one of the towers to appreciate the view over Vienna. 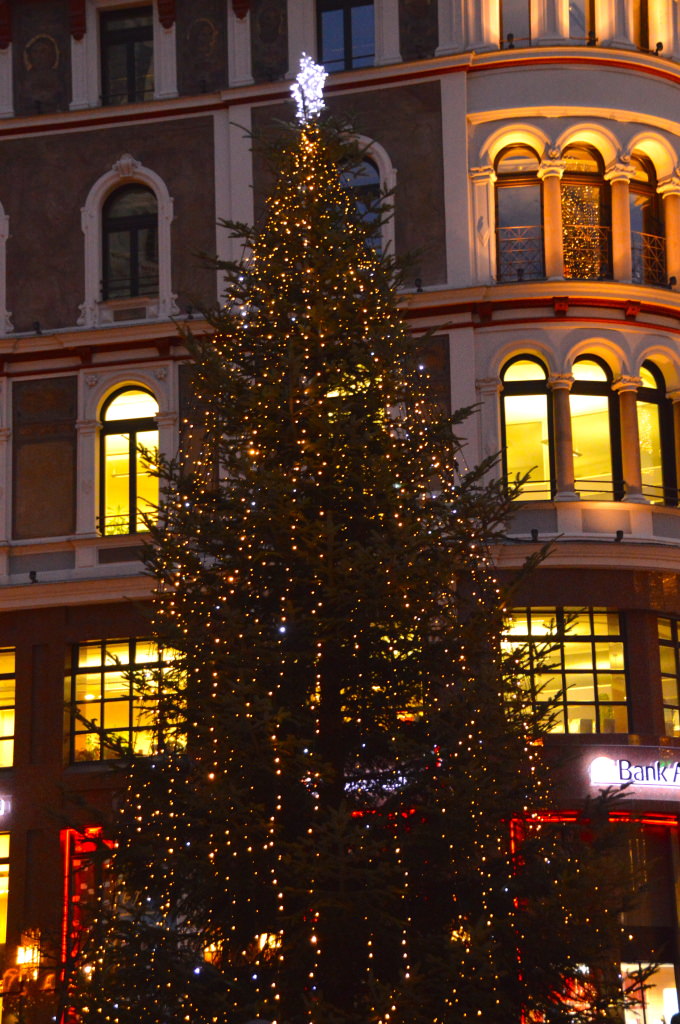 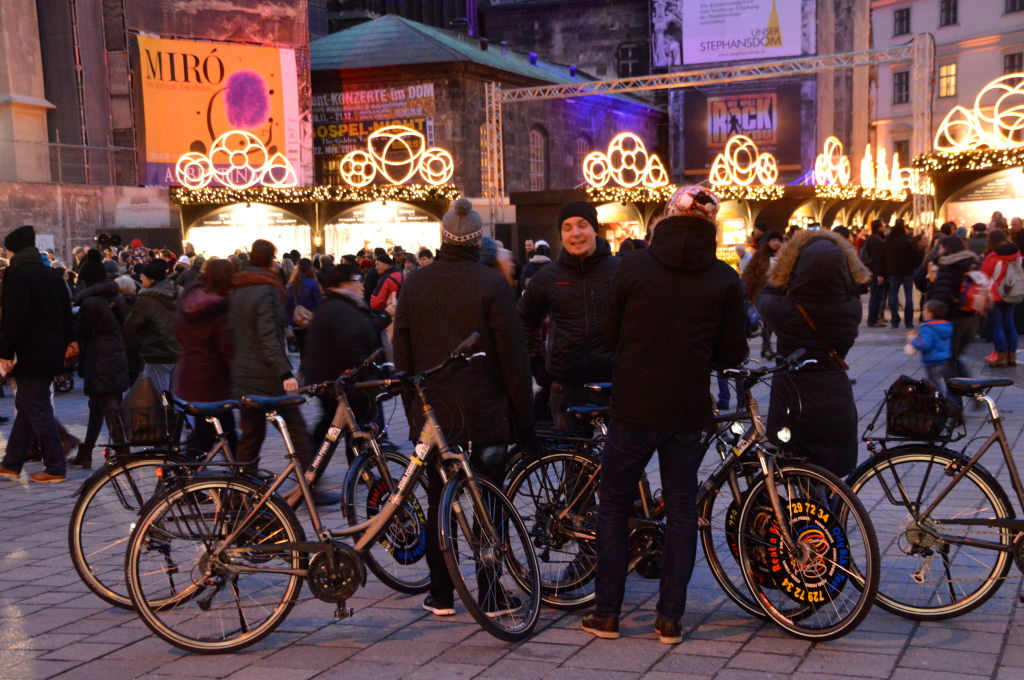 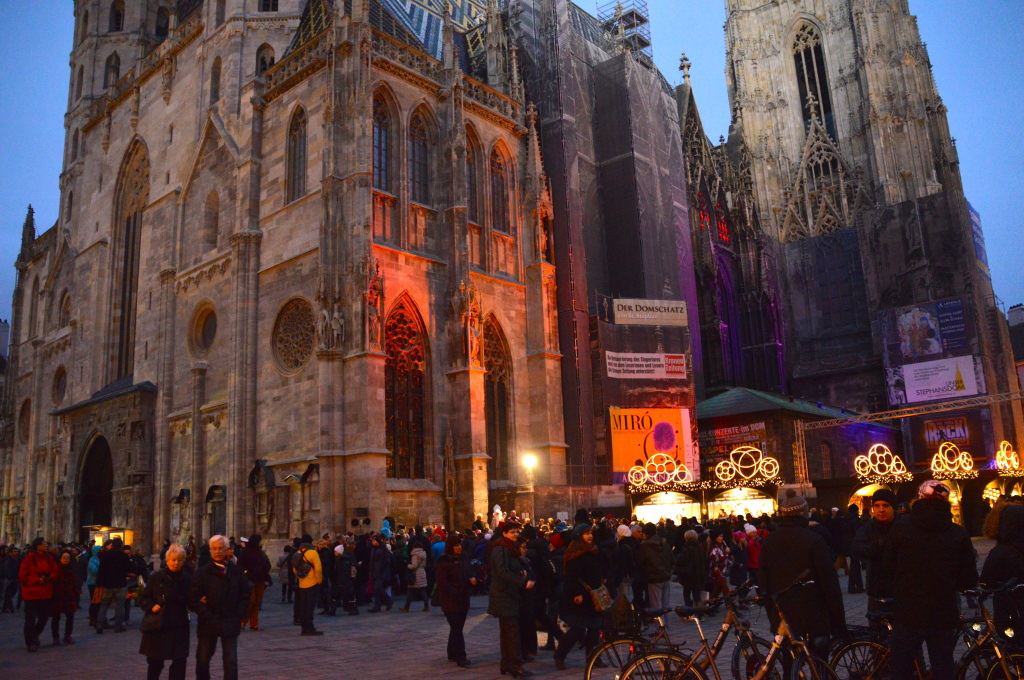 Our guide stopped off at a few of his favourite Christmas markets along the way, including an organic market, and a child friendly market with livestock and rides. These smaller markets were less busy, and although some of the produce was more expensive, it felt more authentic, better quality and had a nicer atmosphere than the market outside the Town Hall. 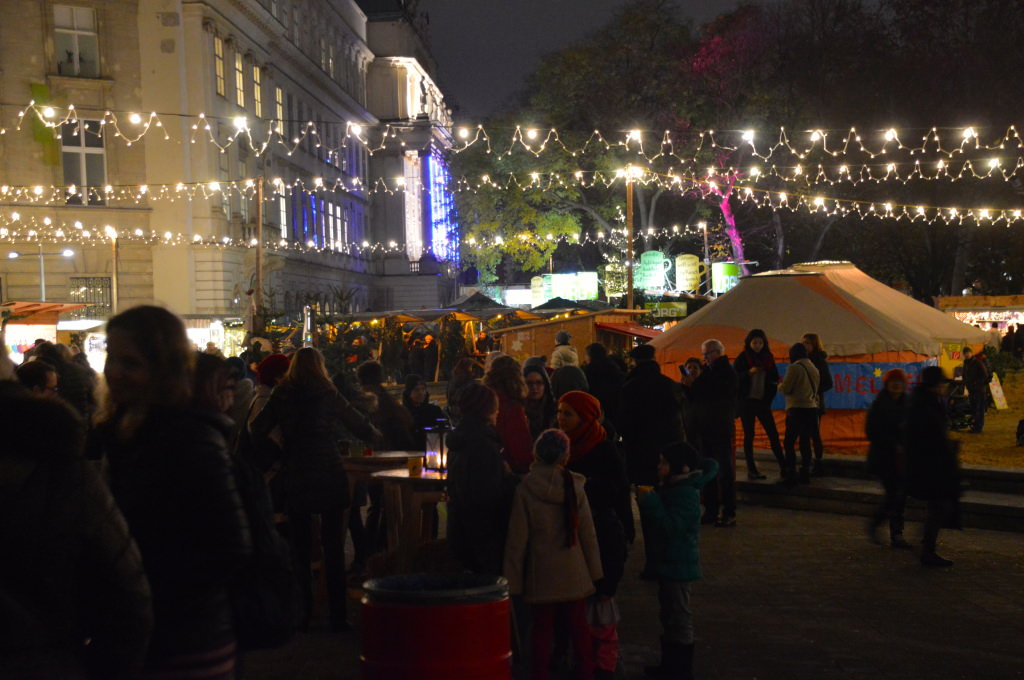 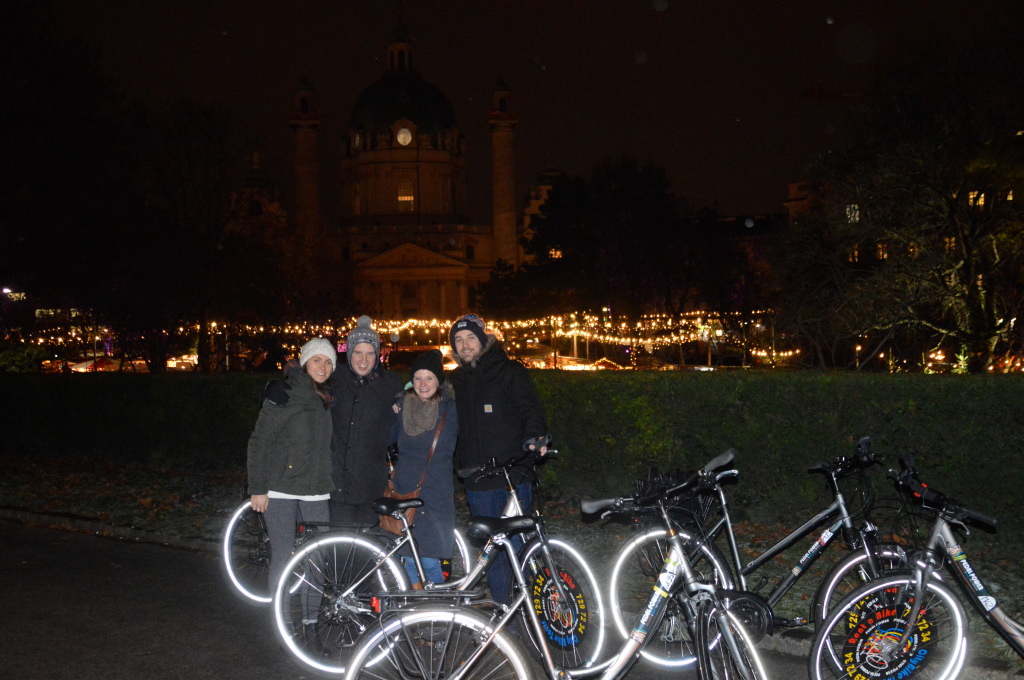 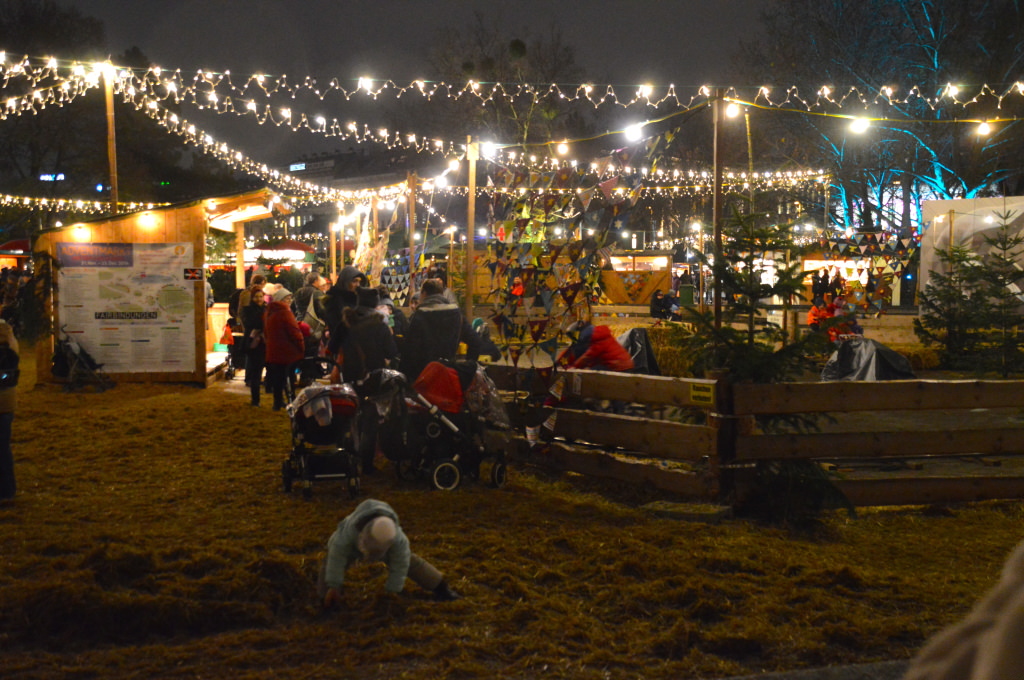 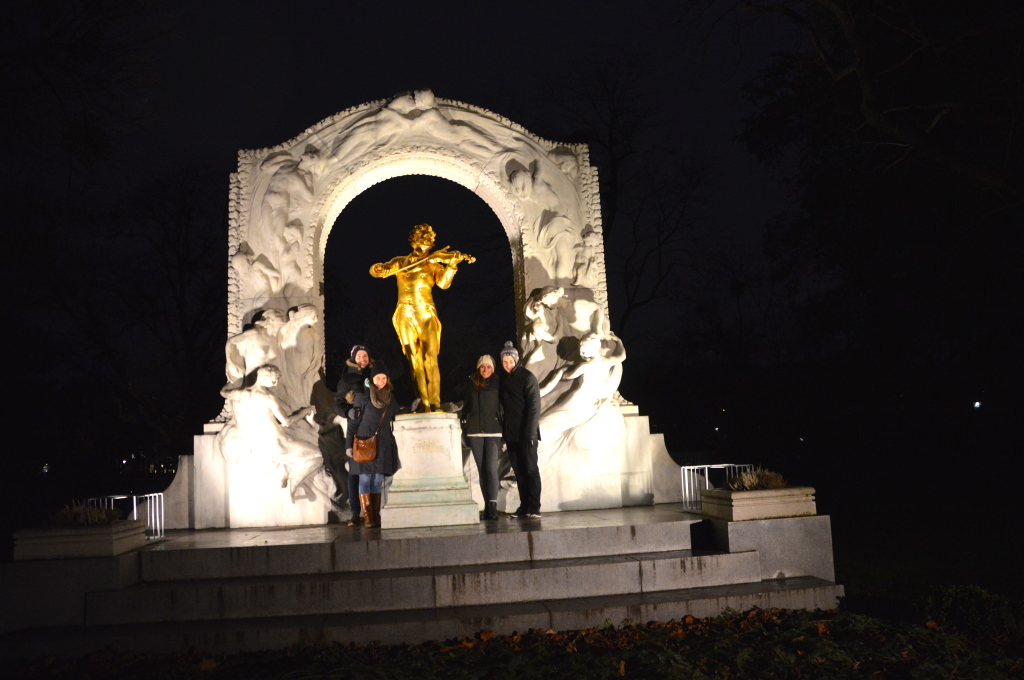 Our last stop to see Strauss- turned gold by an adoring Japanese fan club years ago who were upset that his statue was made out of black marble, and raised money to have him cast in gold! We loved our bike tour, despite the cold. Apparently our guide hadn’t given a bike tour for two months because people had been put off by the weather, but they shouldn’t be! Although it can be chilly, you stay warm by pedaling around- plus with plenty of bike paths and non-car roads, we felt safe the entire time. Our guide, Emmanuel, was incredibly knowledgeable, and we were able to show off to the rest of Tom’s family over the weekend with random titbits of information. I loved having our tour at the start of our weekend, as it really helped us work out where were and how to spend the rest of our time. I couldn’t recommend Pedal Power enough, although do make sure to tell them that you’re serious about the cake and coffee stop!