I love racing, and I love getting a PB. But I need to remember that they won’t all be PB’s, and sometimes having fun on the course and enjoying the race is more important than getting a PB!

I was so excited to run the Bupa 10,000m, running in the same race as Mo Farah, as well as the amazing course. Running along the embankment, past Big Ben and finishing in on the Mall. Last time I crossed a finishing line there it was the London Marathon 2012. 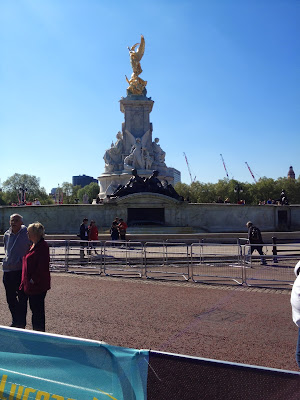 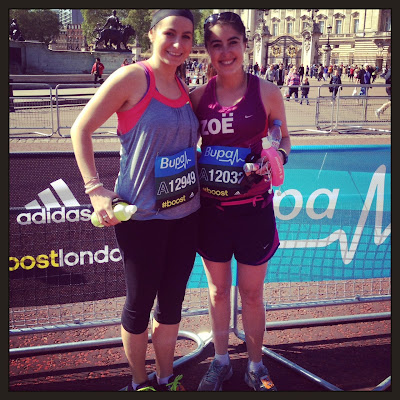 The early start, and a my standard pre-race breakfast of an English muffin with peanut butter and banana, a cup of tea and bottle of Nuun, reminded me how much I love a morning pre-race routine. I don’t seem to get the evening race routines right!

Green Park was filled with runners, spectators and professional athletes. I met up with my friend Zoe by the Lucozade stand, we couldn’t resist a pre-race photo! We also managed to bump into Becs as she headed to her start zone (at the front!) 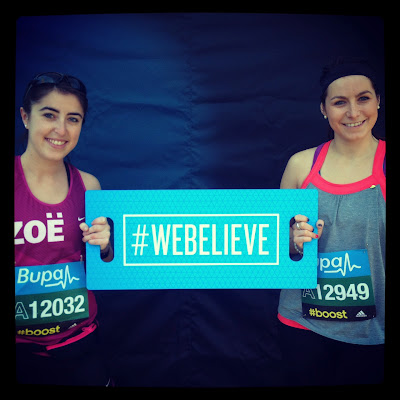 I also picked up a Lucozade pacer band- I opted for a very optimistic 50minute pace band, knowing that I was aiming for a 53minute 10K. 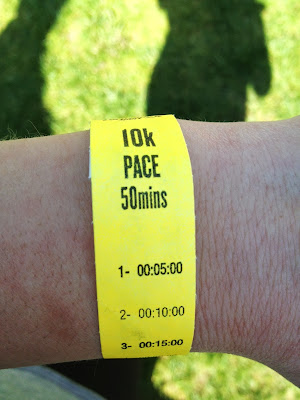 The start was really organised with a huge bag drop area, plenty of loos, meeting areas and drink stations in the waiting area. A large race at its best! The race boasted a staggered start, with nine different starting groups. We had a green A bib, which meant that we were one of the last groups to set off, about 15mins after the original gun.

As always in races, people seem to overestimate how fast they’re going to be! We had to overtake people for most of the race. Next time I race I will be lying about my finish time and starting up near the front, with this guy… 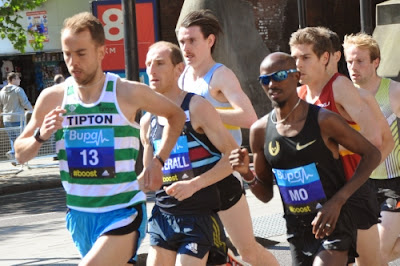 Mo won the race by the way, no surprises!

Anyone recognise Scott Overall just next to him, it was cool to cheer him on after hearing him speak at Write this Run!

My aim was to run hard, keeping my km pace to about 5 minutes, and staying with Zoe for as long as possible. We ran past my Mum and friend Jo who were watching from the sidelines about the 2km mark.   It was around this point that Mo Farah passed us on the other side of the road- about 8km ahead of us! The whole crowd cheered as he ran past us, awesome to be running so close to him! 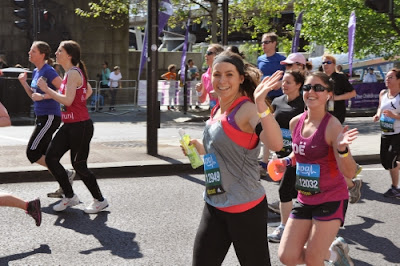 I carried a Lucozade bottle with me, which I don’t normally do during shorter runs, but decided that in the heat it would be wise. I also managed to skip the mayhem at the water stations. Zoe and I both struggled with the heat and crowds during the run, and I sadly lost her about the 6km mark. I really pushed myself on, wanting to get a PB and to feel like I gave it my all.

With 2km to go, I tried to push myself to run faster but felt like there wasn’t much left in the tank. My body felt tight, and I focused on keeping my arms pumping so that the legs would follow. 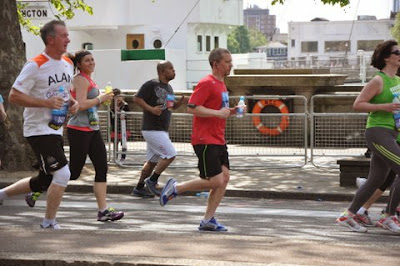 As we rounded the corner and saw the 400m to go sign, I started to pick up the pace, hitting a full on sprint with 200m to go. I knew that I hadn’t got a PB but I wanted to finish strong, even if that meant throwing up on the other side of the finish line! Luckily I didn’t vom, managed to remove my chip timing, collect my medal and t-shirt, and find my Mum. Zoe came in a little behind me, having got a brand new PB!! 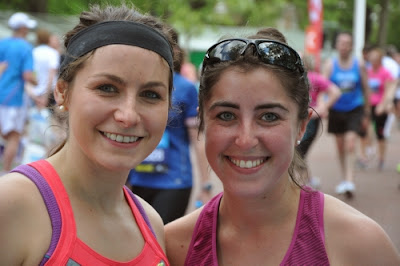 Strangely, my official time seemed to change online yesterday, so I finished in 54.29.

I also managed to run into Jo’s boyfriend, Tom, who had just completed his first race, and was hugely proud to finish without walking in under an hour! 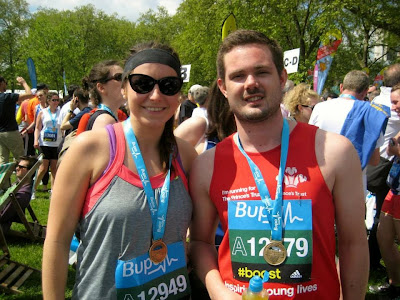 The race was brilliantly organised, with great goodie bags, a beaut medal and so many supporters lining the route. Highly recommended to anyone who wants to run past some of London’s most famous icons, as well as getting the atmosphere of a large race. It is not however, one for PBs- lesson learnt. I am now super tempted to sign up for the British 10K in July that follows a similar route, although the £50 entry is putting me off a bit! 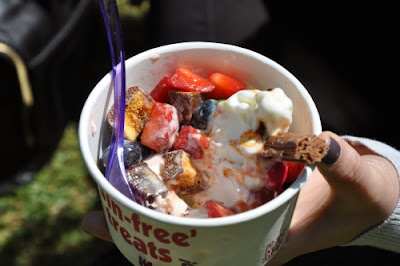 After the race I went for a slap up lunch with my Mum, followed by a froyo with plenty of toppings!