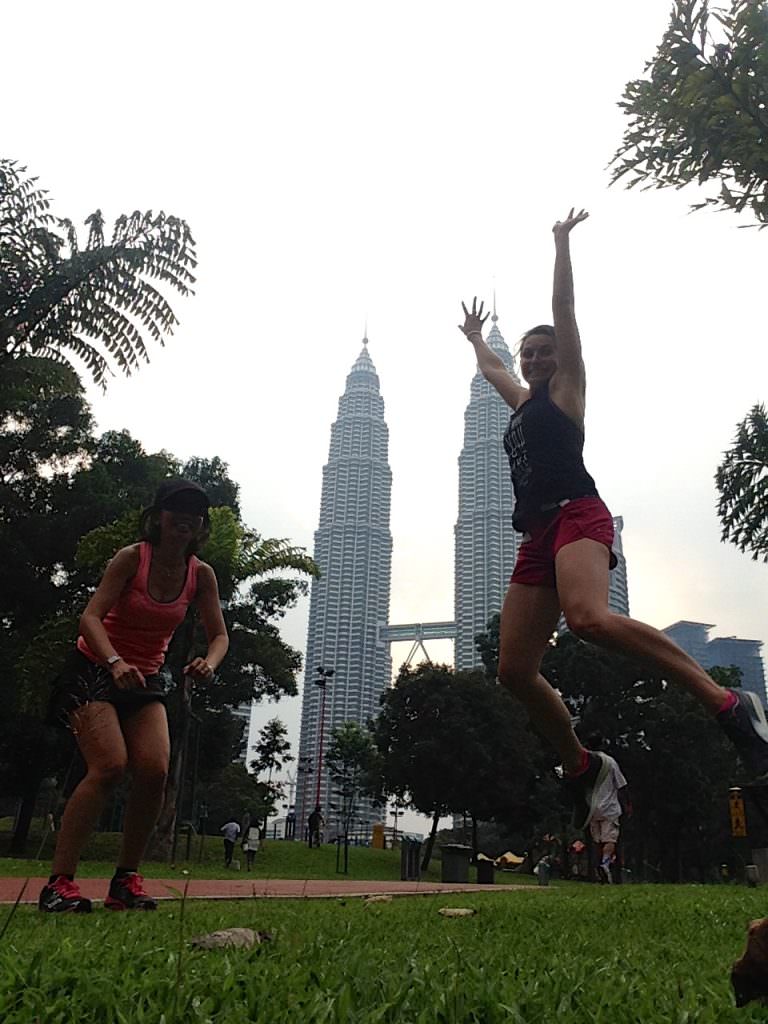 If you’ve read yesterday’s post, you’ll know that I’ve been in KL for a few days on a blogger exchange with Malaysia Airlines. We had a scheduled day of activities that Evelyn (Missy Blurkit– my blog swap partner) and I had discussed before I arrived to include the top sights that Kuala Lumpur has to offer. I’ve been to KL before so had been up the Petronas Towers (twice infact- they are the iconic twin towers in KL city centre). I’d also visited the famous Masjid Negara, the National Mosque of Malaysia and was keen to see the city as a local, rather than just a tourist.

Our first stop of the day, after an amazing breakfast, was a Pilates class at Vision Pilates (you can read all about our class here). As well as working up a sweat (we took full advantage of the showers), the class really woke me up, and made me hungry, so our next stop was to try a traditional Banana Leaf lunch. We headed to the Indian part of town, ‘Little India’ also known as Brickfields where all the best local Indian cafes are.

These traditional banana leaf meals are very popular lunchtime pit stops and our restaurant was soon packed. As part of the meal you get a big dollop of rice, some lentil dahl, some poppadom, cucumber & carrot salad, curried potatoes and some green bean curry. You’re supposed to eat all this with your fingers, unfortunately a skill that I am not adept at so I had to ask for a fork. It doesn’t look very pretty (at all) but tastes great! 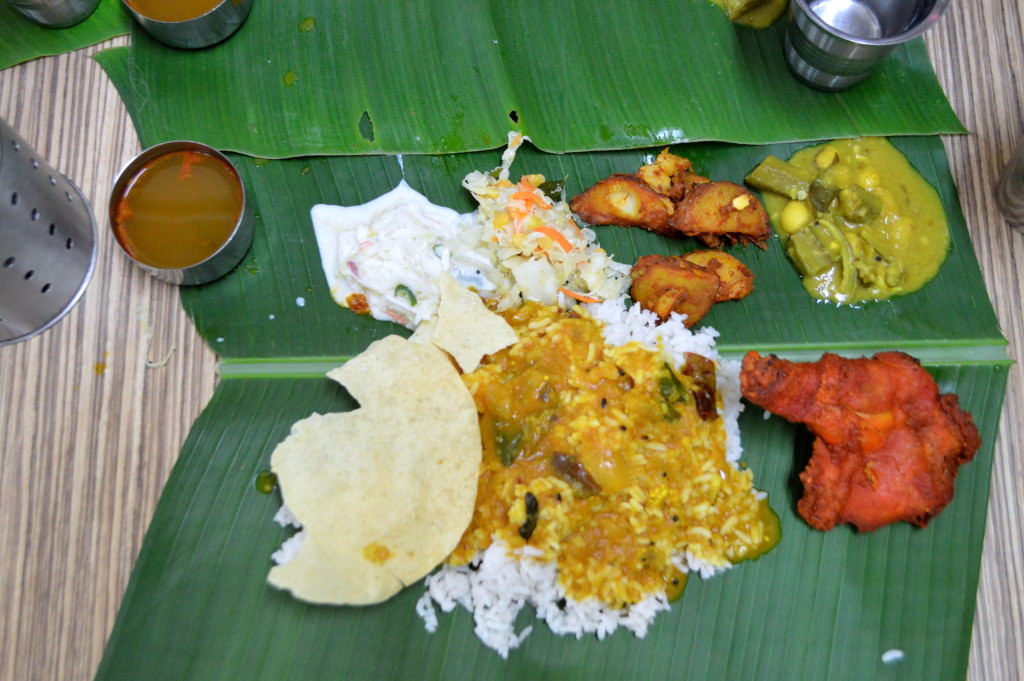 We wandered down the street, stopping for a look around the Indian temple. Wandering around the Brickfields area reminded me so much of Jaipur. The sari shops were beautiful, with the very bright gold jewellery gleaming out from behind the glass. 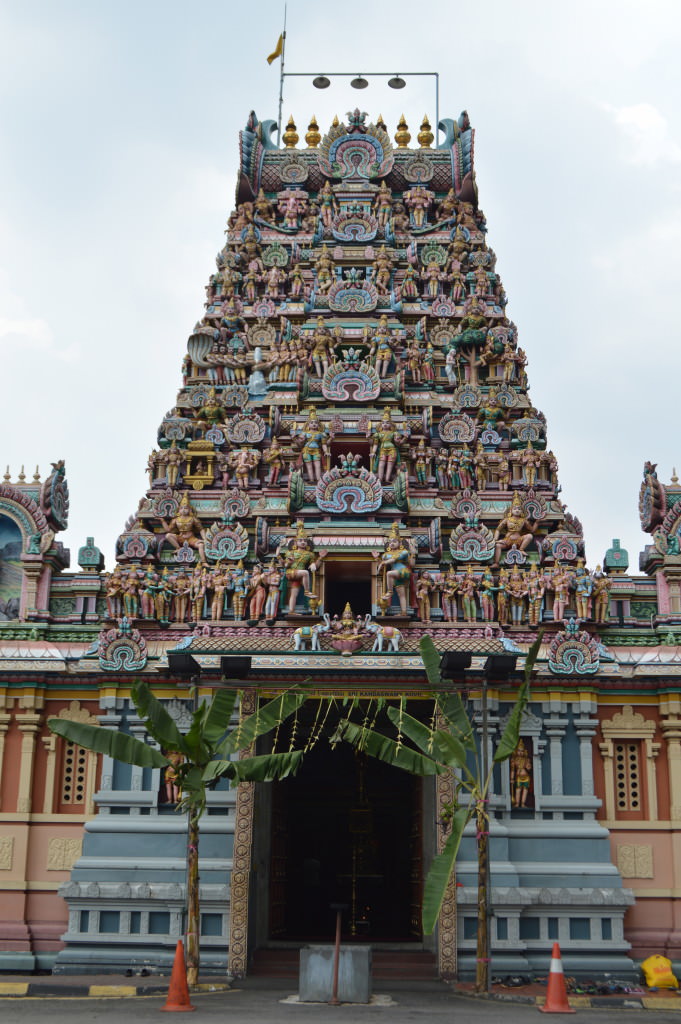 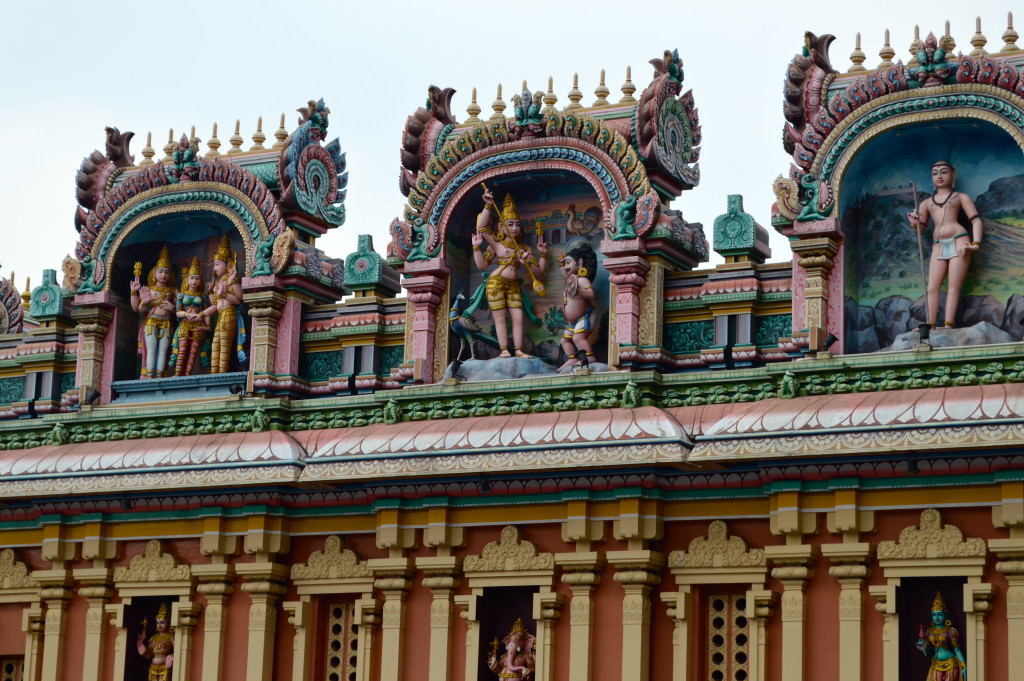 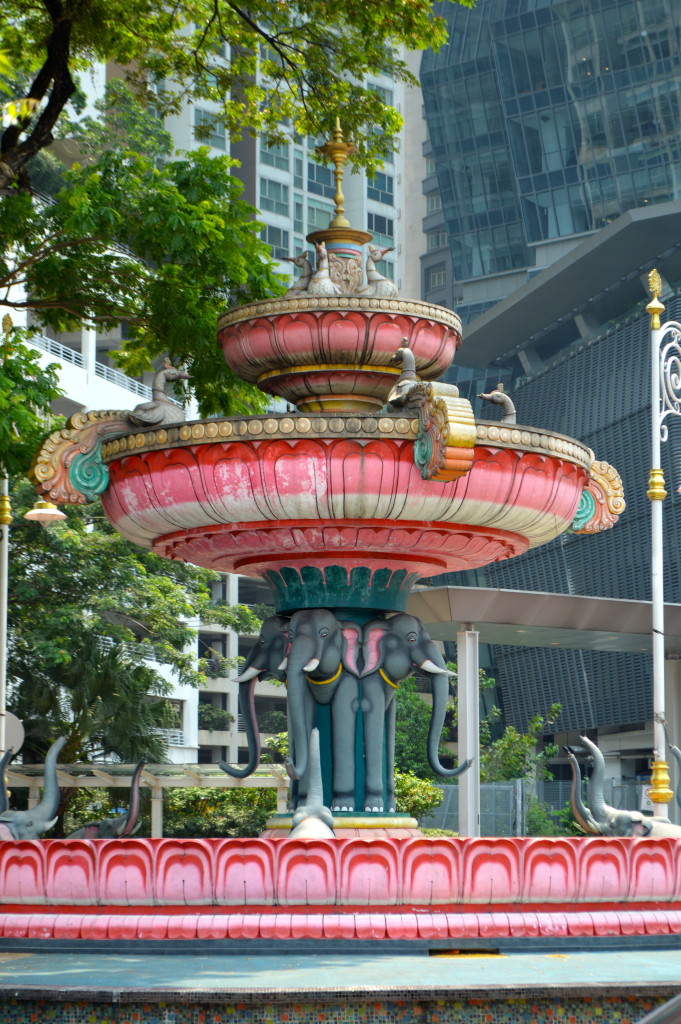 Next up was Chinatown, and more specifically Petaling Street market. I’d bought some goodies here 5 years ago, and thought I might stock up again, however a lot has changed and things were more expensive, and lower quality. I didn’t end up purchasing anything but enjoyed peering into shops, admiring fake designer handbags and hearing about the area from the very knowledgable Evelyn. 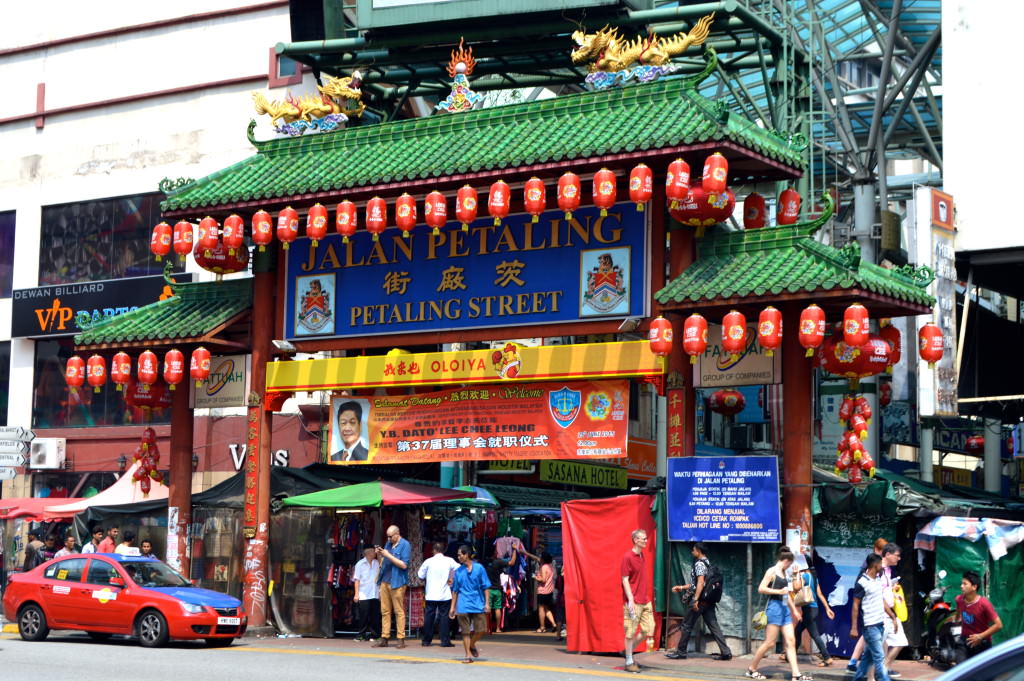 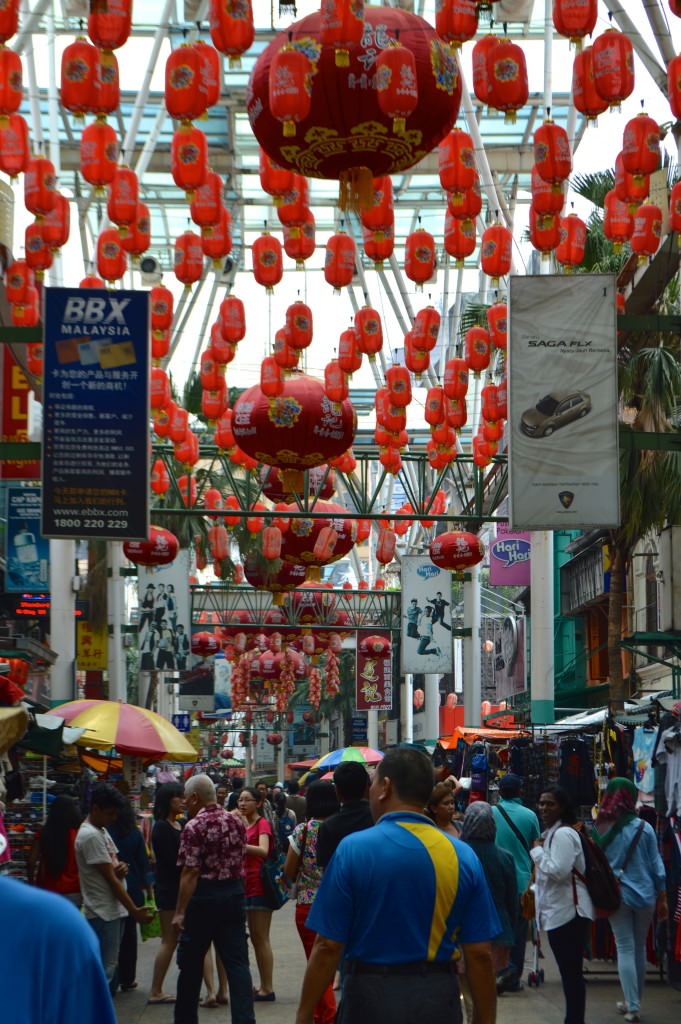 Whilst in Chinatown we visited one of the Chinese temples which was aglow with candles and incense. It also had a sign up asking people to pray for those born in the year of the goat, ox, dog and dragon as apparently this is not a good year for them. I’m the year of the dragon..oh dear! 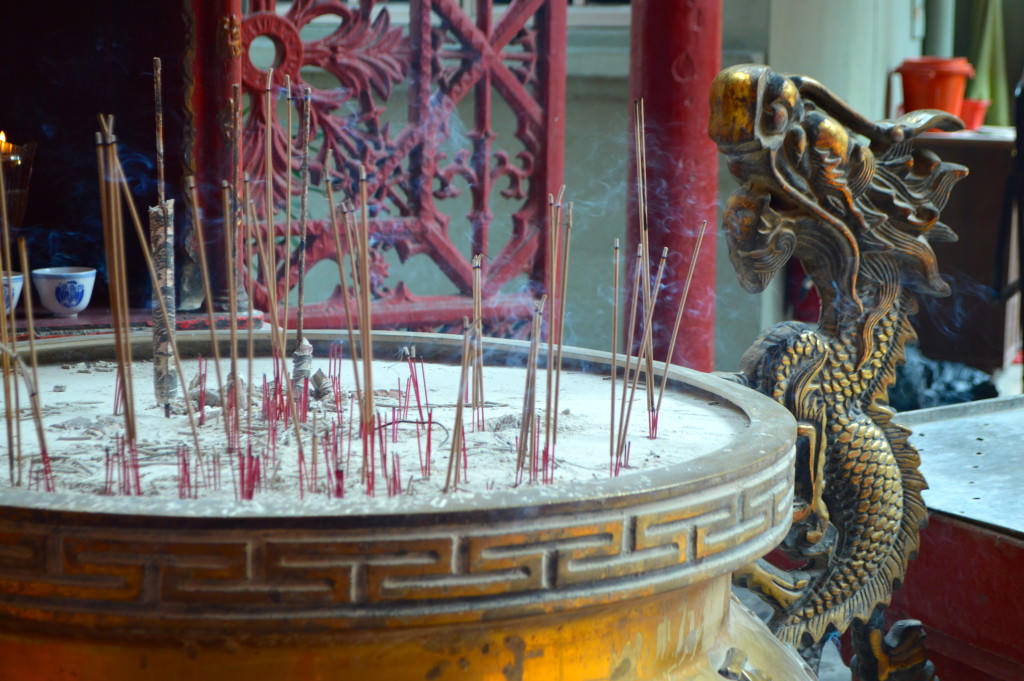 We rehydrated with an amazing fresh coconut water at Central Market (it’s indoors and air-conditioned which is perfect) Apparently they also have some of the nicest public loos in KL! 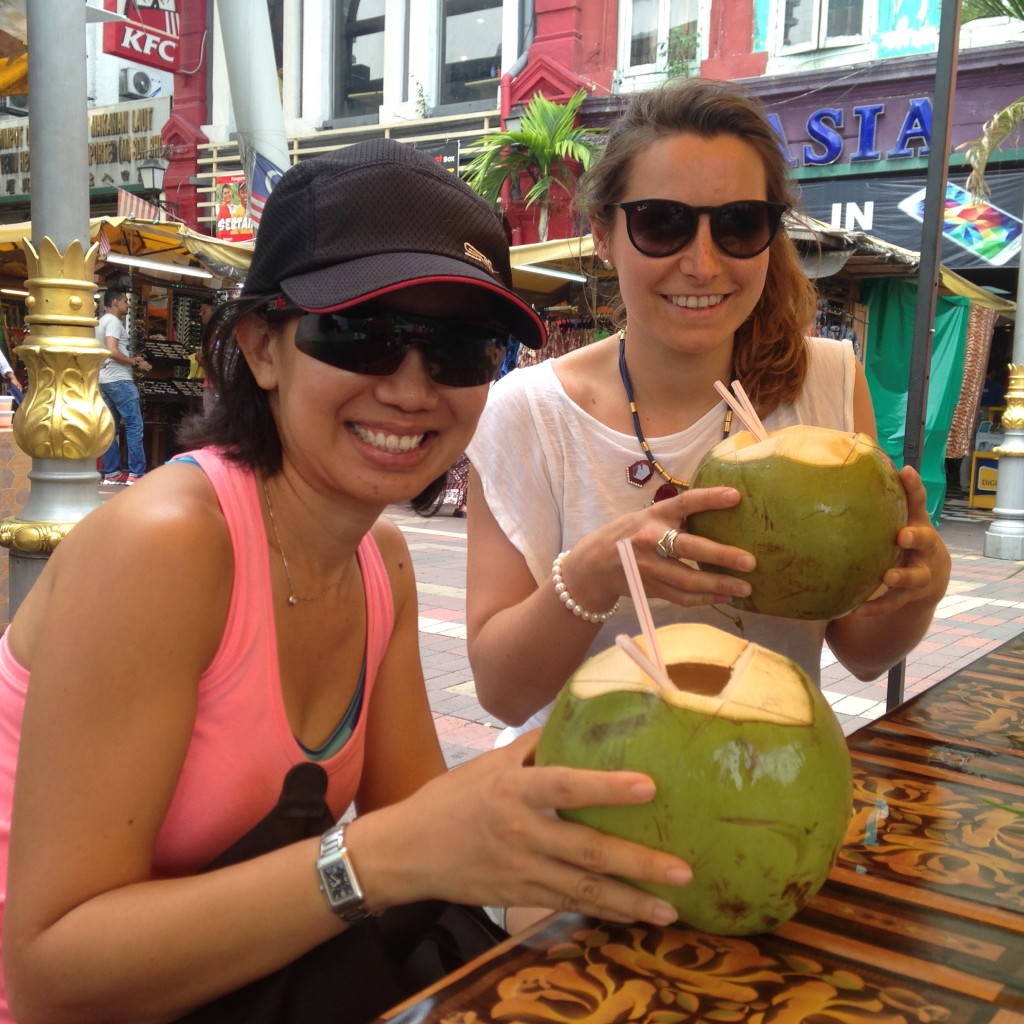 I nodded off in the car on the way to our final location, so we decided it was time for some sugar to perk me up. We all enjoyed a scoop of ice-cream at Inside Scoop ice-cream parlour. The peanut butter chocolate chip was amazing!

It’s Ramadan at the moment, so a lot of Malaysian’s are fasting (Islam is the main religion in the country). They break their fast at 7.30pm and there are special markets set up across the city specifically for those breaking fast. I love food markets so we stopped by to explore one before the rush hour crush a few hours later. Many non-muslims were taking advantage of the quiet time to get their shopping done and feast on the local delicacies. 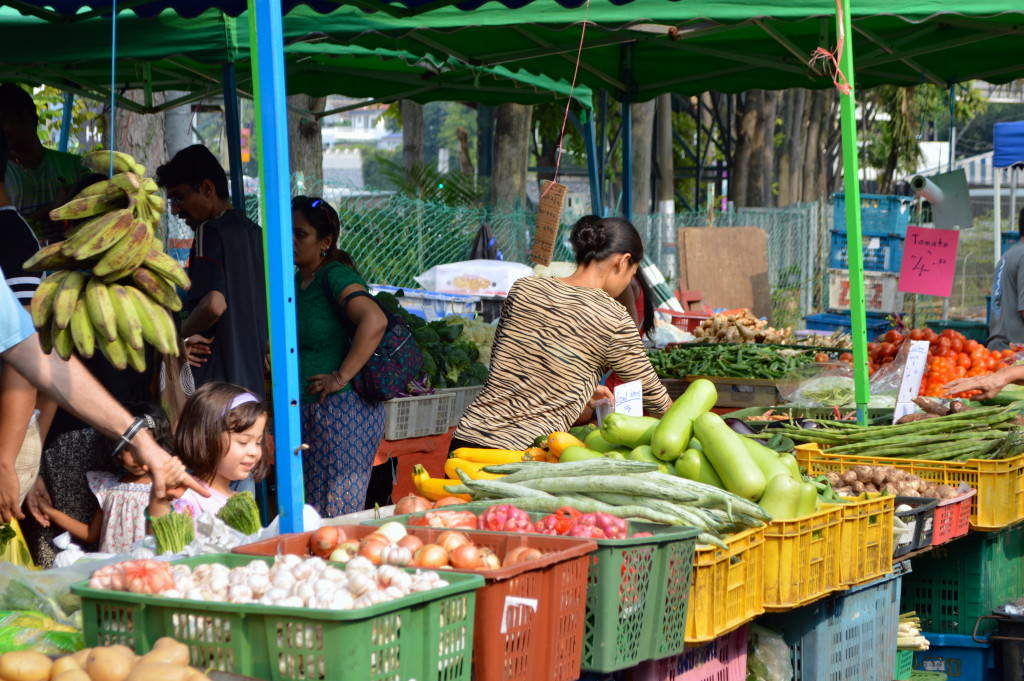 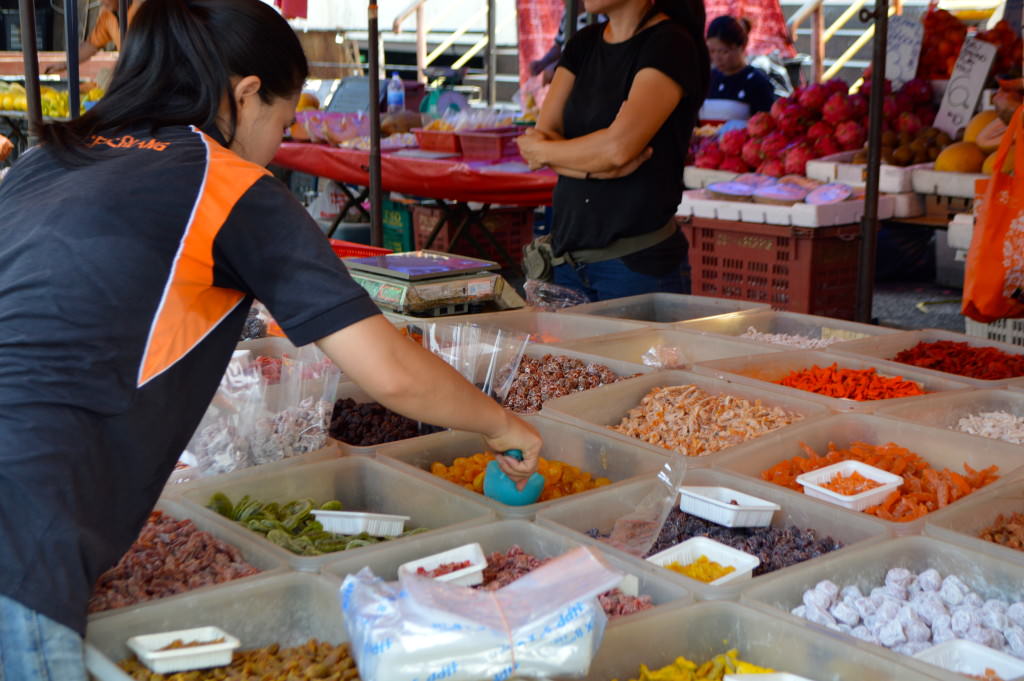 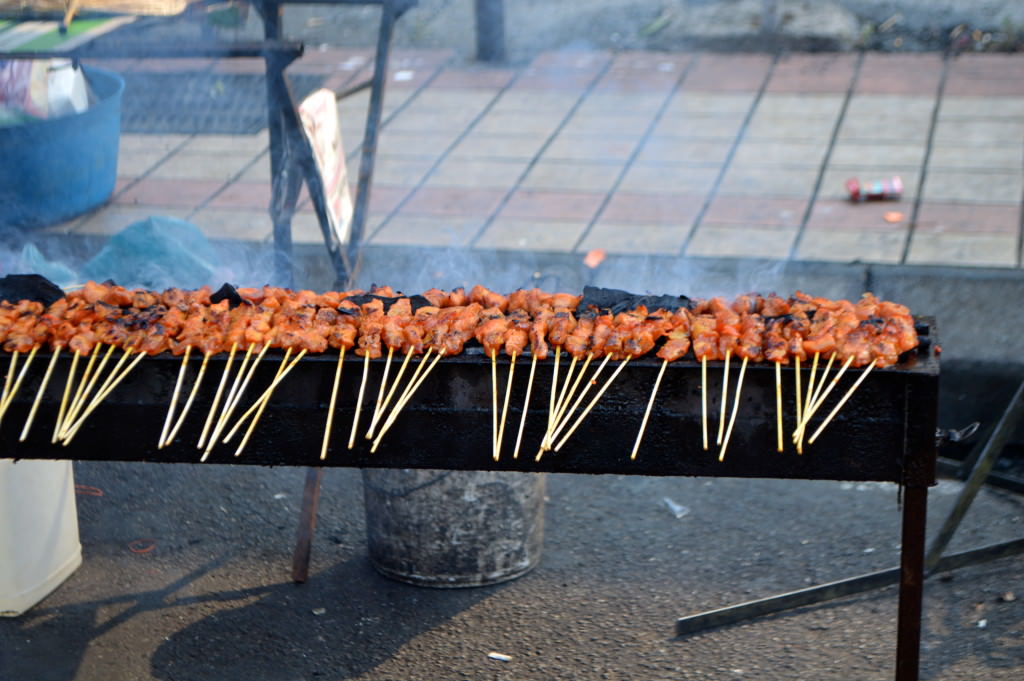 There were some amazing looking fruits, including jack fruit, durian, sugar apples and more. Drinks in bags with bits of jelly in them seem very popular too although I wasn’t brave enough to try one. 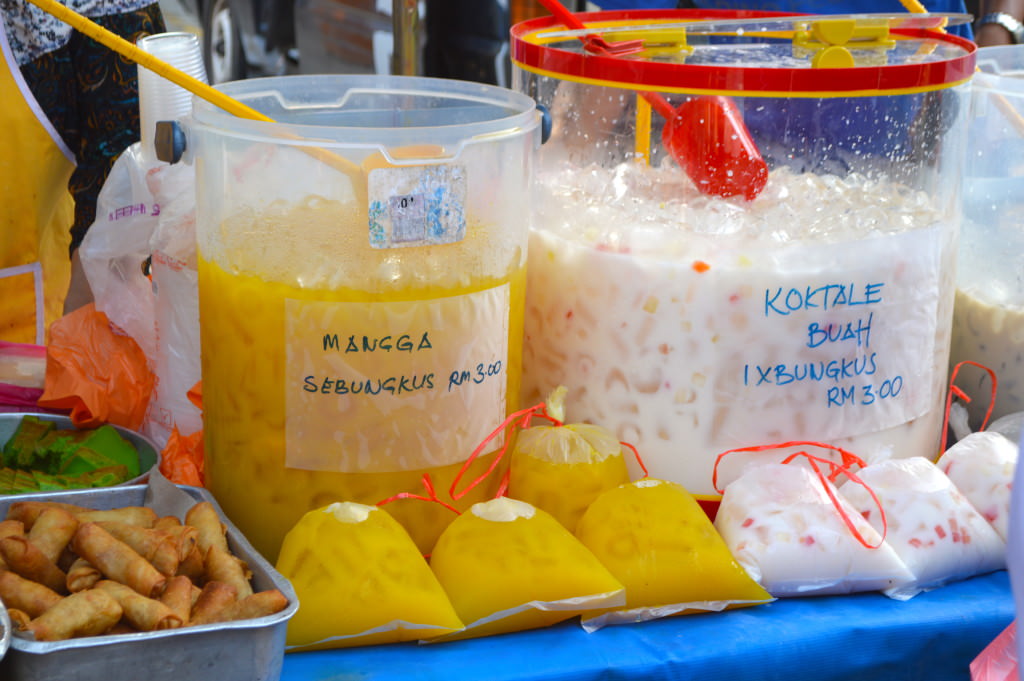 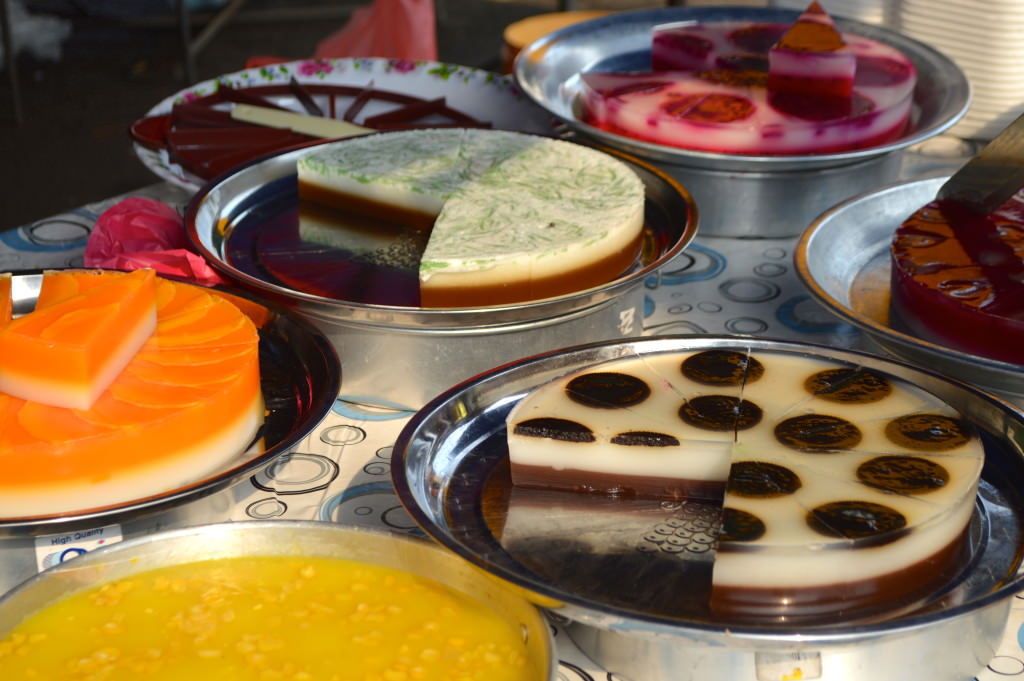 Evelyn had promised that we were going to run together, so despite the heat and humidity, I laced up my trainers and headed out to KLCC park- just outside the hotel. We ran 2 and a bit laps of the park, posing for a jumping shot with the Petronas Towers behind us (some more successfully than others- see first picture). I was a sweaty mess, and was incredibly glad that we don’t suffer from the humidity in the UK! 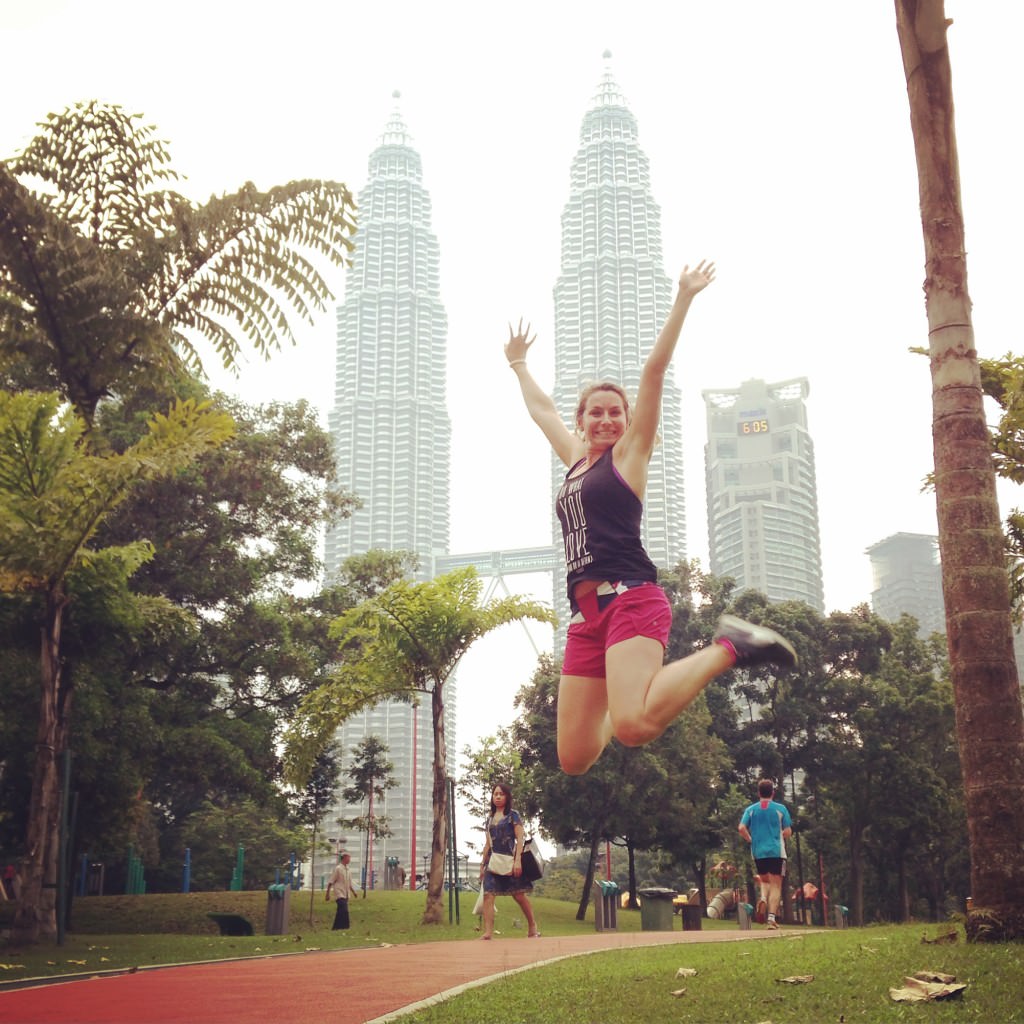 For dinner that evening we ate at one of the hotel restaurants at the Grand Hyatt, their JP Teres restaurant has a huge feast every night during Ramadan, with one of the biggest buffets I’ve ever seen. Feeling a little overwhelmed, I stuck to satay, Char keuy teow (a delicious noodle dish with prawns, eggs and vegetables, minus the cockles), and an incredibly light pudding called Pandan cake. It’s green in colour from the chlorophyll in the plant juice used for flavouring and tastes a little like Angel cake, served alongside soft whip.

What I didn’t realise was that the lovely staff at the hotel had discovered that it was my birthday recently and had organised an amazing chocolate cake. Needless to say, I left dinner feeling very full! 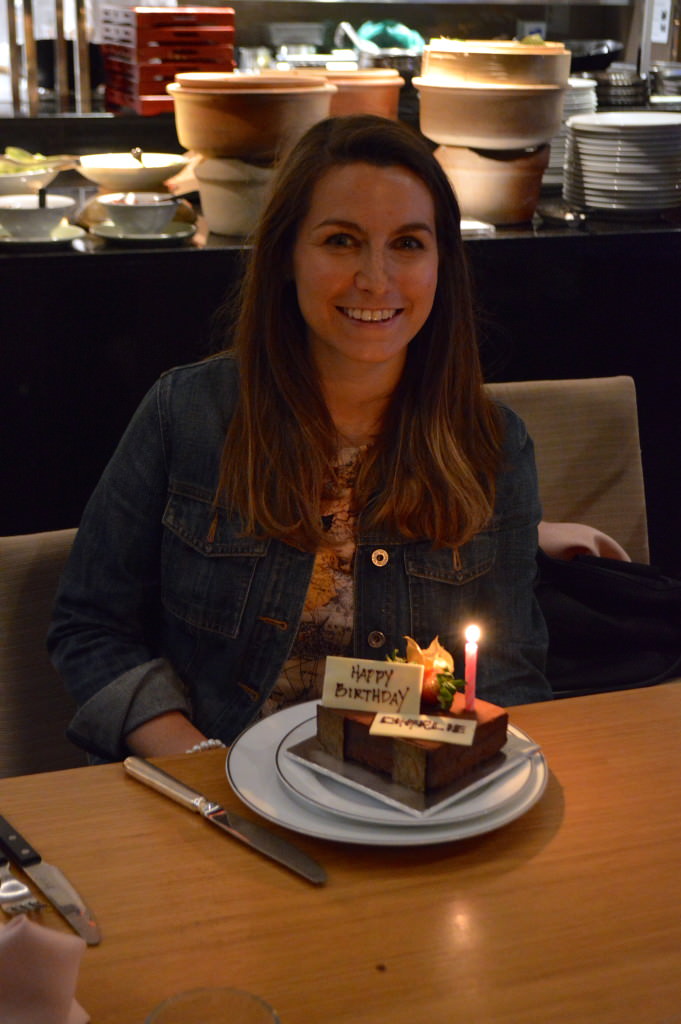 Thank you so much to Malaysia Airlines and Grand Hyatt Kuala Lumpur for hosting me on such an incredible trip! I can’t wait to come back to explore more of Malaysia in the future.