I’m just halfway through the challenge, having completed 11 yoga sessions over the past 20 days. Which means I’ll be completing 10 session in the next 11 days- cutting it fine! In truth, I started out so well, but have let it slide a little as my workload has increased and running has reappeared on my training schedule. I’m definitely feeling a difference though, and I finally touched my toes in a forward bend in a class last week! I’m also beginning to feel like a real yogi, with a greater understanding what the teacher is talking about, knowledge of the poses and more confidence in my ability. I’ve also discovered that Goodvibes have SAD lighting to combat the depressing winter gloominess, and give you a dose of Vitamin D which means I bound out of my Friday classes feeling relaxed, reinvigorated and motivated.

As I progress with my Paris Marathon training, I need to ensure that yoga stays a priority. It will mean some two-a-day workouts but that’s fine with me. I’ve realised that I work best when I’ve got a plan written out and can stick to it, as well as making dates to workout with others.

Friday- Yang and Yin Yoga class (aka my favourite class) 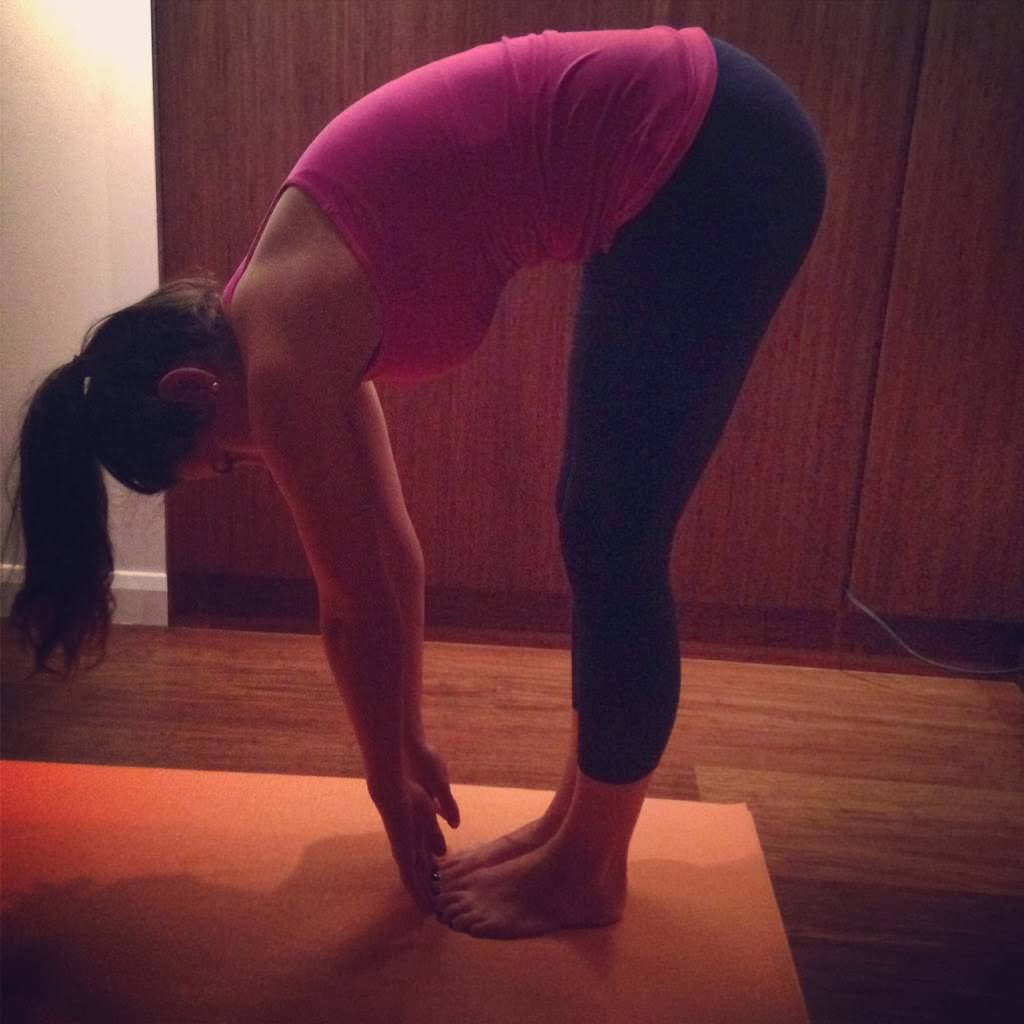 This week I’m showcasing some more of my fellow yogis (yes I sort of refer to myself as a yogi now!) to see how they’re getting on with the challenge! 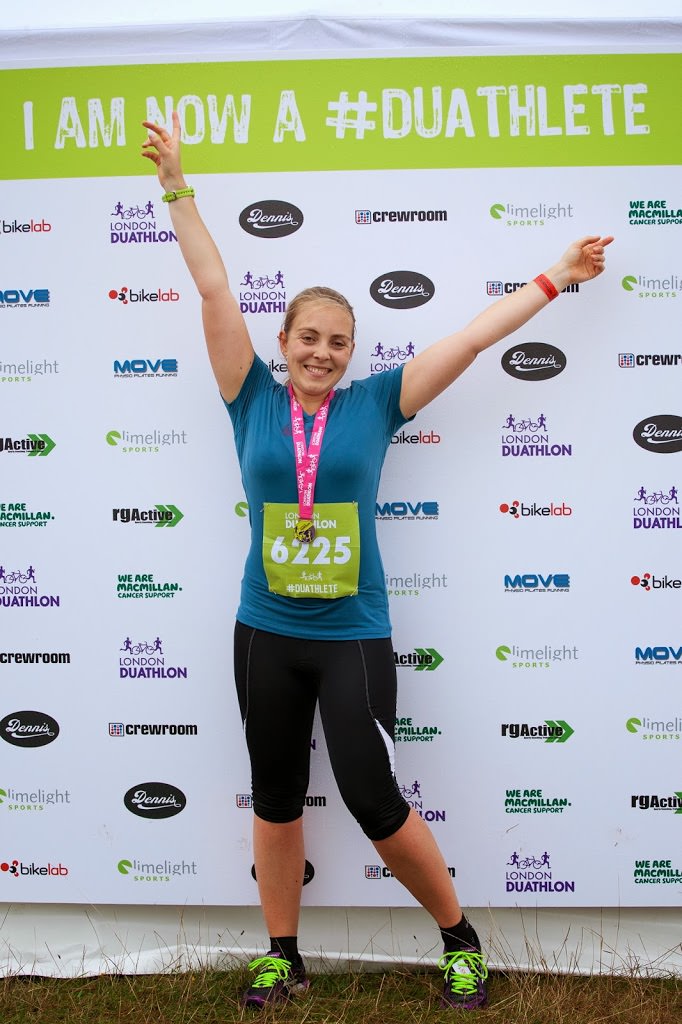 Yoga has been something that I’ve practised on and off over the past few years but it wasn’t until last November (or Yo-vember) that it became a regular occurrence. This was due in part to my physio telling me that I need to focus on stretching my tight muscles and working on my flexibility to avoid re-injuring myself after struggling with ITB issues.

When browsing the internet I came across the “30 Day Yoga Challenge” from doyouyoga.com with Erin Motz, and immediately signed up. I fell in love with her teaching style as she was so straightforward and focused, but with a great sense of humour! In fact, so much so that I’ve backed her Kickstarter project MyYogaPro, a web based yoga community that will be launching in April with thousands of videos for you to download and follow (this isn’t a plug, I just genuinely love the idea!). I’ve been to a few classes in London, but not living directly in the city it’s often difficult and expensive for me to travel to a studio, and can take up the whole evening.

So far during the 21 Day Yoga Challenge most of my practise has been at home – I have a fab sticky yoga mat which I love, and I started out the month following Erin Motz’s 10 Day New Year Yoga Ab Challenge. When that ended, I turned to my YouTube playlist of some of my favourite routines, which mostly include Yoga for Runners sequences, Hip Opening Flows, post-run Yoga cool-downs and some Yoga for Better Sleep which is great! I’ve always struggled with the meditation and “spiritual” side of yoga, and to be honest I still do. I find it hard to relate to and often feel a little foolish “omm-ing” or whatever. However, I love the focus and distraction yoga provides, and the relaxation aspect has been a lifesaver these past few months. Just taking the time out of my day for even 15mins where all I think about are the movements and my breath is really refreshing.

The plan for the remainder of the month is to try Bikram Yoga – something which has been on my “To-Do” list for a while, but this yoga challenge has given me the push needed to actually give it a go! There’s a studio near to where I work, so it should be relatively easy to take a class after I finish at the office…here’s hoping I can stand the heat! 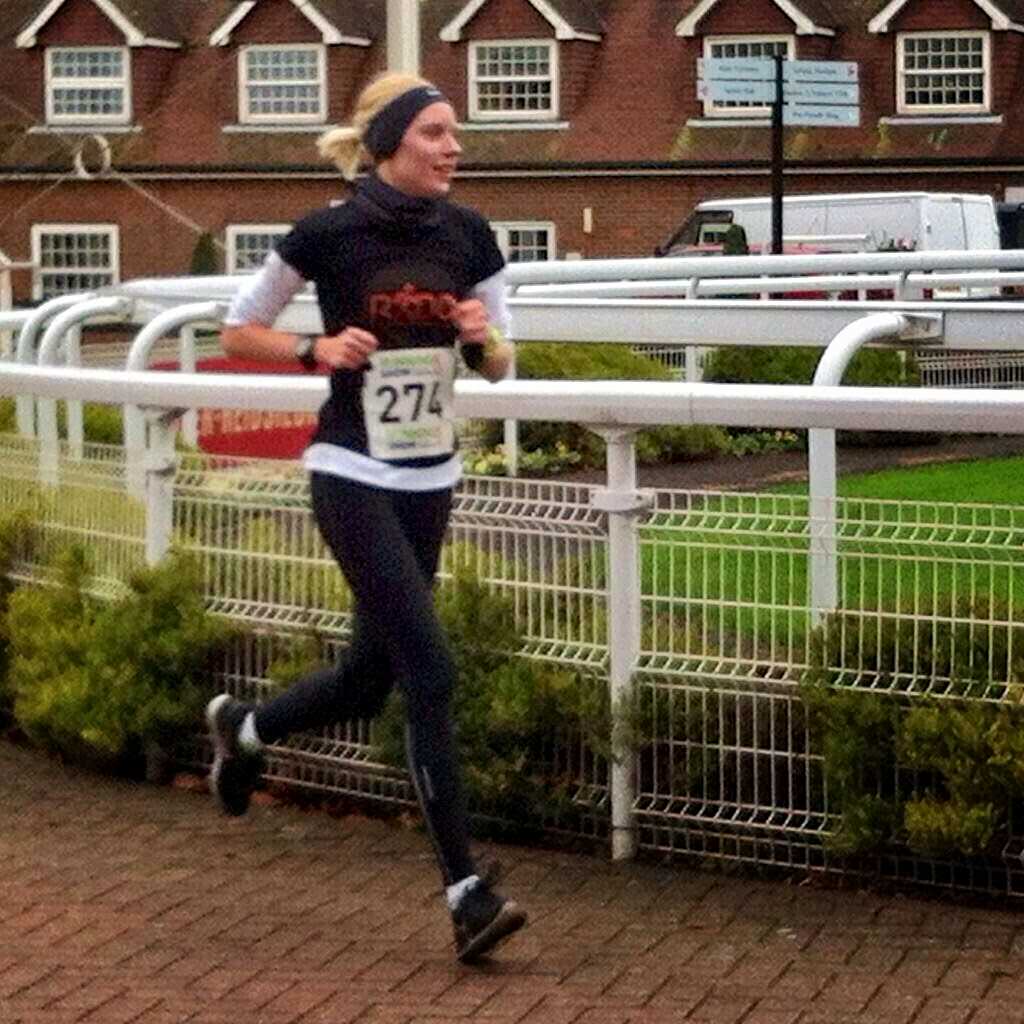 It’s been almost a year since I started practicing yoga. I started as soon as I arrived in London – I’d never found the quality, breath and frequency of classes elsewhere before. After only a couple of visits to The Power Yoga Company, and I was pretty much hooked.

Before the start of the year, I’d been worrying that my yoga practice might have to take a bit of a back seat as I plunge headfirst into marathon training until April. But then on the train back to London on New Year’s Day, I decided to sign up to the #21daysofyoga challenge – as it would mean I still gave some focus to it, even as the miles started to rack up. I planned out meticulously when I was going to fit the 21 days in, and I had wanted to do all of them at a studio, rather than at home. As usual though, life has got in the way a bit and I haven’t managed to get to every class. I’m also a lot more worn out from my long runs than I thought I would be – and as I practice a fairly demanding style of yoga, they’re not always great to follow up a hard run with.

That being said, the challenge is helping me to get to at least 2 classes a week, and along with some home practice thrown in, I’m seeing some real benefits. Yoga has improved the tone of my arms, shoulders and middle, plus the stretching and strengthening poses definitely benefit my legs. Personally, I think the biggest benefit I see from yoga isn’t physical – discovering more about breathing techniques, mindfulness, dedication and mental strength are what keeps me going back for more.

Becca – From Snickers to Marathon

I’ve been practicing yoga for just over two years now and I really enjoy it. I’m not a naturally flexible person, quite the opposite in fact, so I find many poses quite challenging. As I’m also a runner I know that yoga is a really good way to counteract the effects of pounding the pavements, but I’m not so good at making time for it. I tend to let yoga drop off my to do list when life gets hectic, which is exactly the wrong thing to do. When my life feels frantic that’s when I actually need yoga the most.
Towards the end of last year I’d really let my practice slip, so when I read about the 21 days of yoga challenge it seemed like the perfect way to re-establish yoga as a regular part of my routine. I’m training for the London Marathon in April so it seemed like a good addition to my training plan.
I’m loving the challenge so far – I’ve just finished Day 13 and yesterday I touched my toes in a seated forward bend for the first time ever, so I’m seeing the benefits too! I’m combining classes at Good Vibes Studios with home practice which is a new thing for me. I’m really enjoying it and it’s made me realise that it’s quite easy to fit a 30 minute session into my day when I don’t have the time to get to a studio based class. The challenge is teaching me to be as disciplined about my yoga as I am with the other aspects of my training plan. That’s going to be a great thing to take into the next few months in the lead up to the marathon. So thanks Charlie for setting up the challenge!
I hope this challenge has inspired some of you runners to make yoga more of a priority in your training schedules- I know I will!

WIN- open to everyone, not just those that are taking part in the challenge, but leave a comment about your yoga experiences for a chance to win a Lululemon Yoga Starter Kit. This includes a mat, towel, strap and block.